Chinese amphibious aircraft AG600 Jilong will be tested at sea 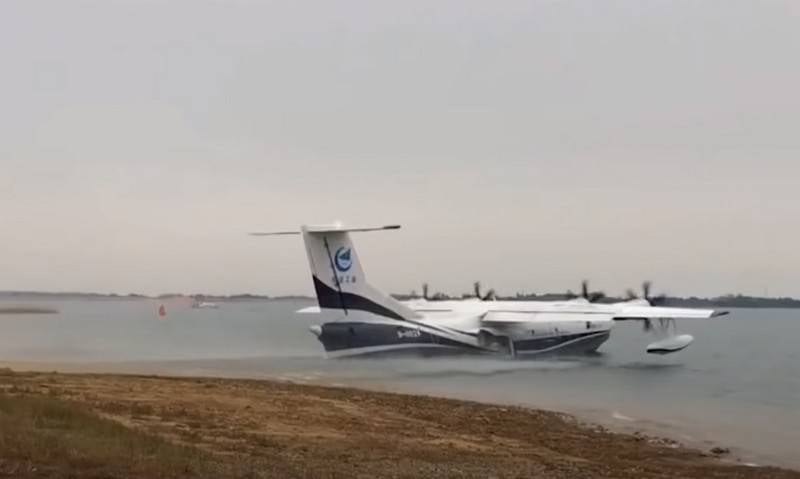 Chinese amphibious aircraft AG600 Jilong is preparing to conduct tests in the marine area. According to Defense Aerospace, a new phase of flight testing of the aircraft will be held off the coast of the South China Sea.


Note that the AG600 has already been tested on water, but all tests that have passed have been carried out in Hubei Province in the reservoir on the Zhanghe River, i.e. in fresh water. Planned tests at sea should give developers data on the impact of an aggressive marine environment on the airframe, its components and assemblies. In addition, the controllability of the aircraft will be checked for various waves at sea. The test start date has not yet been announced.

The aircraft is designed to extinguish fires and conduct rescue operations on the water. It is equipped with four turboprop engines, is able to stay in the air for up to 12 hours. The maximum take-off weight of the AG600 is 53,5 tons, the hull length is 39,3 meters, the wingspan is 38,8 meters, and the maximum flight range is 4,5 thousand kilometers. Today it is the largest amphibious aircraft not only in China, but also throughout the world.

By the way, if the Russian United Aircraft Building Company (UAC) resumes production of an Soviet-designed A-40 Albatros amphibian, as reported in September last year, the Chinese AG600 will lose first place among the largest amphibious aircraft, because the maximum take-off weight "Albatross" is 90 tons, in contrast to 53,5 tons of the Chinese counterpart.
Ctrl Enter
Noticed a mistake Highlight text and press. Ctrl + Enter
We are
The Chinese Jilong experienced a slip. Now it remains to take off from the waterChinese "Jilong" passed flight tests
23 comments
Information
Dear reader, to leave comments on the publication, you must to register.