The war between Russia and the United States (Politics, Serbia) 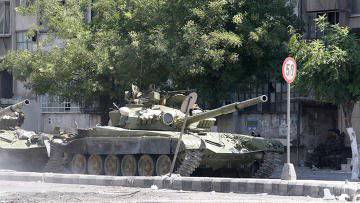 For some time now, the war between the USA and Russia that has not been declared by anyone has continued. This war is merciless, although neither John nor Sergey perishes on it.

Death assigned to the Syrians. They are bloodied, ready to shoot at each other, throw bombs, commit crimes, be “cannon fodder”.

Global players are “horrified” at this time, they are calling press conferences, calling on the UN to hold a meeting of the Security Council (of course, behind closed doors) to say at the end that they have nothing to say.

The Americans support the rebels against Bashar al-Assad and want to overthrow him, while the Russians are convinced that this would be the beginning of real chaos.

It is important to keep your hands clean.

From Washington comes the news that the US Congress, claiming a new military budget, has banned the Pentagon from cooperating with the Russian monopoly on the sale weapons - Rosoboronexport.

The reason for this decision was that the Russian government supplies weapons to the authorities in Damascus, which is contrary to American interests. It is not reported what exactly American interests are, but it is worth recalling that the same Rosoboronexport almost a month ago became one of the main suppliers of the US Army at another hot spot - in Afghanistan.

What are the interests of the United States there - is also not specified.

Russia and China once again vetoed a Western draft resolution of the UN Security Council, which threatened the Syrian regime with sanctions. According to Moscow’s position, the Western countries with the above-mentioned document only wanted to justify possible military intervention in Syria, according to the Libyan scenario.

“Their attempts to use the UN Council to implement their plans and put pressure on sovereign states will not pass,” said Vitaly Churkin, the representative of Russia in this organization.

Syria has undoubtedly become a regional arena, where the real strength of the United States and Russia is once again being demonstrated. The classical division of the era of the Cold War into "West" and "East" is hardly appropriate in this case, since it is already quite clear that everyone who is outside of Washington and Moscow plays the role of more or less active supporters in the Syrian case.

This is evidenced by the recent visit of the UN special envoy for Syria Kofi Annan to Moscow, which ended in a sluggish message that can in no way affect the course of events.

The war in Syria produced different concepts of international relations, each of which is suitable only for superpowers.

Americans, using the theme of "human rights", give themselves the right to interfere wherever they have interests - even in the courtyard of Bashar al-Assad.

For Russians, a very clear position is that its overthrow would open the door to the implementation of the so-called concept of regime change, which undoubtedly represents a threat to the traditional business interests of Russian companies in various parts of the world, including in the Middle East.

In this "mini-cold war", which, unlike the wars of the Soviet Union, has no ideological character, the weapon is not selected. Anything well. The media, of course, is one of them.

To declare any armed conflict “the extermination of civilians” is a tactic that always gives a good result. Even if, ultimately, the truth floats to the surface. Thus, information and misinformation appeared about what happened two weeks ago in the Syrian city of Tremsehu where, according to the first news from London, 200 civilians, women and children were killed, and after a few days it turned out that it was a clash of soldiers Assad with deserters. The effect of the first message was still significant.

As the analyst of the Polish newspaper Global Politics recently wrote, the unfortunate people in Syria - like their comrades in misfortune in Iraq, Libya and Afghanistan - are beginning to realize that they are only a tool in the hands of powerful powers seeking to realize their interests on the battlefield.

The question is whether they can change anything on their own. It is clear that neither America nor Russia will facilitate their current situation.