He tore the fascist flag from the Acropolis 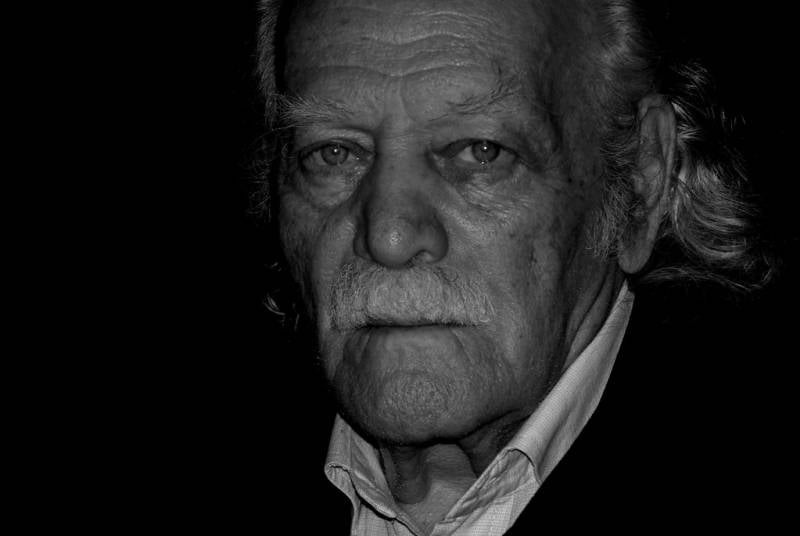 The night of May 31, 1941. Over one of the most famous sights of the world, the Greek Acropolis, an ominous flag waving with a swastika. The invaders imposed a curfew in the conquered country, and established patrols. The paths to the Acropolis were carefully guarded. But two impudent young men managed to get there through the cave, the existence of which the invaders did not know.

Unpleasant incident for the invaders

The next morning the whole city was struck: the Nazi flag disappeared without a trace, and the flag of Greece fluttered over the Acropolis.

For the invaders, this incident became extremely unpleasant: Hitler ordered the execution of all the soldiers who guarded the Acropolis, and sent the officers to the front line. The Nazis sentenced in absentia to death those who tore the flag, but they could not find the brave guys.

One of those young patriots was the future politician Manolis Glezos. Together with him that night, his friend Apostolos Santos participated in a dangerous operation. Before committing this act, they pronounced to each other the oath of the ancient Hellenic warriors. They tore the hated symbol and threw it into the abyss, leaving a shred for themselves.

On the way back, a policeman, Greek by nationality, saw the guys smudged with earth, but did not stop them (although he probably guessed). Upon returning home, Manolis presented his trophy to his mother. She warmly approved the act of her son, although she was very scared for him.

News of this spread far beyond the borders of Greece and inspired fighters against fascism. As Charles de Gaulle said, the man who did this was the first partisan of World War II.

Manolis Glezos was born on September 9, 1922 in the village of Apirantos on the island of Naxos. His father was a sailor, his mother was a teacher. He also had a younger brother, Nikos.

As a child, the boy was hard on the social injustice and need that the population of the island lived in. Then Glezos will recall that it was the cry of hungry children that made him become a fighter for the happiness of the people.

He lost his father early. A few years later his mother remarried. Although his stepfather cared about the formation of stepsons, he could not establish emotional contact with them. Subsequently, he will be quite loyal to the occupiers, while other members of the family will hate them. Means of the stepfather allowed the brothers to move to Athens and study at the gymnasium. Later their mother moved there.

Manolis was fascinated by the richest history their country. He especially liked to go to the Acropolis. There he learned about that secret passage, which subsequently had to be used to tear down the enemy flag.

The brothers were soon faced with the need to earn money to continue their studies. They worked part time in a pharmacy, where they distributed medicines and washed dishes.

October 28, 1940 Italy attacked the country. The Greek government, however, was more afraid of left forces than fascists. At that moment, Manolis and Nikos tried to get to the front as volunteers, but they were refused because of their too young age.

On April 6, 1941, the Germans took the side of the Italians. The Greek leadership capitulated. Britain, who vowed to defend Greece, withdrew its troops to Crete. the king and members of the government fled there. Soon, however, they had to flee even further - to Egypt, since Crete was also captured.

On April 27, 1941, the Nazi flag appeared on the Acropolis - the same one, which will subsequently be torn down and dropped into the abyss. In addition, this happened against the backdrop of the victorious reports of the Nazis coming from Crete.

Manolis did not stop at this feat - he continued to want to fight the Nazis. In March 1942, he was captured for the first time and tortured. Comrades helped him escape from the dungeons. Glezos began to participate in the issue of an illegal newspaper, joined the Communist Party of Greece. Brother Nikos also joined in underground activities. In 1943, Manolis was again arrested - and again managed to escape. And in 1944, the Nazis captured Nikos, sent him to a concentration camp, where they subsequently shot him.

On November 4, 1944, the Nazis were expelled from the territory of Greece by the British, but the latter actually opposed the Greek national liberation movement and began to establish their own rules. Glezos and his comrades planned to carry out a partisan operation against the British, but Churchill arrived in the country. The patriots did not want to kill one of the participants in the anti-Hitler coalition.

The Communist Party of Greece was particularly violently attacked. To show that the Communists actively resisted the Nazis, Glezos told the public who ripped off the flag with the swastika from the Acropolis.

In September 1946, the king who escaped from the invaders returned to Greece. The country was restored monarchy. The Communists were outlawed. Glezis again ascended to the Acropolis and erected letters there that read "English, get out home."

Soon he became the editor-in-chief of the left-wing newspaper Rizospastis, which the authorities constantly pursued. In October 1947, the newspaper was banned. Prosecution was instituted against Glezos; he switched to an illegal position. In December of the same year, the Communist Party was banned.

In March 1948, the well-known anti-fascist was arrested and, as with the Nazi occupiers, tortured. And the prosecutor at his trial was a man who had previously collaborated with the Nazis. He recalled Glezos and the case of the flag. Politics sentenced to death. International solidarity saved him from this fate. In 1949, a new trial took place over him - and again the death sentence. Glezos spent ten days on death row. In the USSR, a campaign was launched in his defense. And not only in the USSR. The authorities did not dare to execute the world-famous fighter against fascism.

While in prison, in September 1951, Glezos was elected to the Democratic Left Party (EDA). According to the law, he was supposed to be released in order to carry out deputy activity, but the authorities revoked his mandate. Manolis went on a hunger strike and sent appeals to international organizations. After 12 days, already being seriously ill, he stopped her at the insistence of the public - he was persuaded to survive in spite of the enemies.

He was released from prison only in the summer of 1954. And then he joined the political struggle, became the editor of the newspaper of the party EDA "Avgi". In 1955, he had a son, who was named Nikos - in honor of his deceased brother.

In 1957, Glezos visited the Soviet Union, where he was invited to the fortieth anniversary of the Great October Socialist Revolution. And in December 1958 - again arrested. He was accused of espionage in favor of the USSR. And again - the threat of the death penalty. In the Soviet Union, as a sign of solidarity with the Greek political prisoner, they issued a postage stamp with his portrait. And again, the solidarity campaign forced the authorities to pronounce him not a death sentence, but to appoint 5 years in prison, 4 years in exile and 8 years in political rights.

In October 1961, Manolis Glezos was again elected deputy from the EDA party - and again his mandate was canceled. In December 1962, he was released under the pressure of the world community. The next year he again came to the Soviet Union, where he was awarded the Lenin Prize. In 1965, his daughter Maria was born.

But fate was already preparing new trials: on April 21, 1967, a fascist coup took place in Greece. Glezos was one of the first to be arrested by the "black colonels." His wife was also captured. He spent four years in prison.

A total of 16 years of anti-fascist life passed behind bars.

However, relations between Glezos and the USSR were not always cloudless. Like many European leftists, he reacted with incomprehension to the tough actions of Moscow during the “Prague Spring”. This, however, did not spoil his relationship with the Soviet Union.

After the fall of the dictatorship of the "black colonels", Manolis Glezos was twice elected to parliament. In 1984, he became a member of the European Parliament, but two years later he refused the post of deputy and went to his native island of Naxos. There he tried to implement his project to establish direct democracy. He created a university, a weather station, four museums. But after a few years, the authorities intervened and closed this project through administrative reform.

Principle to the end

In 2000, the politician headed the electoral list of the left-wing Sinaspismos party, then created his own movement, Active Citizens, which were included in the SYRIZA bloc.

Being already at a very respectable age (87 years), Glezos took part in a demonstration in Athens on March 4, 2010. During the demonstration, clashes with the police occurred. He stood up for the youth beaten by law enforcement officers, and received a stream of tear gas in the face.

In 2014, a veteran of anti-fascist resistance became a member of the European Parliament from the SYRIZA bloc, but soon he had a conflict with former associates. Glezos did not like their flirting with the European Union and cutting back on social programs. In an interview, he said: if the EU flag fluttered over the Acropolis, he would be ready to rip it off. Glezos refused the mandate and headed the part that broke away from SYRIZA called "National Unity." And this showed his integrity, thanks to which he was respected by everyone, even political opponents.

Recently, on March 30, 2020, this wonderful person passed away. Russian President Vladimir Putin expressed his condolences to the Greek people over the loss, calling Glezos a true friend of Russia.

Until the end of his life, Manolis Glezos continued his social activities. He was one of those politicians in Europe who supported our country on the Crimean issue. And shortly before his death, on February 27 of this year, he received a medal from the hands of the Ambassador of the Russian Federation in Athens Andrei Maslov for the 75th anniversary of the Victory in the Great Patriotic War. Unfortunately, he did not live to see the anniversary of the victory over fascism, to which he also contributed.

Ctrl Enter
Noticed a mistake Highlight text and press. Ctrl + Enter
We are
Heavy forty firstIt was in the Donbass. The main drawing of Maria Volkova
18 comments
Information
Dear reader, to leave comments on the publication, you must to register.