Syria, April 9: militants blocked the road to a Russian patrol in Idlib 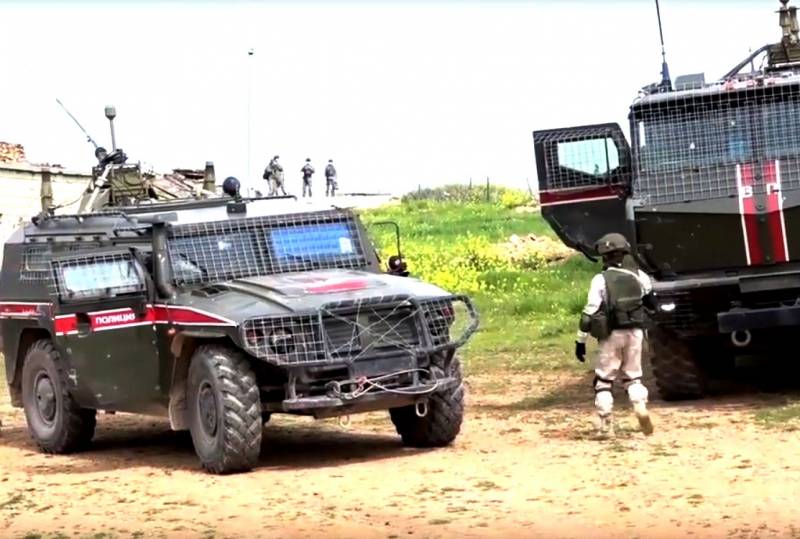 The situation in various provinces of Syria remains tense. Regular clashes between the militants themselves added to the constant clashes of radical groups with the Syrian Arab army. In Idlib province, militants did not miss a Russian military patrol.


As you know, the Russian and Turkish military, according to the agreements, patrol sections of the strategic highway M4 in the province of Idlib. But the militants of the Khayyat Tahrir al-Sham organization banned in Russia once again prevented patrolling. Having blocked the highway, they let in only Turkish soldiers, and the Russian military police were denied access. The Russian military did not resort to harsh measures. It is reported by Baladi Network. Official confirmation of the incident has not yet been reported.

In the meantime, the Syrian Arab army was again forced to fire artillery shells on the positions of the Khayyat Tahrir al-Sham militants. Fire was fired on the fortifications in the area of ​​the villages of Al-Fatyr and Safuhan. Syrian artillery deployed on the outskirts of the city of Maaret al-Numan, thus responded to the firing by the KHT militants of the positions of government troops in the vicinity of the village of Flyifel. In addition to artillery, Syrian Air Force reconnaissance unmanned aerial vehicles also participated in operations against the militants. Also, the Syrian military discovered a cache weaponsused by militants.

In the province of Aleppo, the Turkish army fired on the positions of Kurdish formations in the vicinity of the villages of Umm al-Khash, Ahras, Tal-Karah, Tel-Susan and Ain-Dakna. Fire on the positions of the Syrian democratic forces was also opened in Hasaka province, where in the vicinity of the villages of Tel Tamr and Abu Rasin, the Turkish army and the Syrian National Army, controlled by Ankara, attacked the Kurdish fortifications.

On the border of the provinces of Deir ez-Zor and Raqqa, near the village of Maadan, clashes occurred between Kurdish fighters of the Syrian Democratic Forces and Damascus Shia militias that operate in the area.

Interestingly, clashes between the radical groups themselves are increasingly occurring. In the province of Raqqa, there was a conflict between the militants of the Al-Jabhat al-Shamiya group and the so-called Syrian Free Police. From the "free police" the militants of the "Syrian National Army" demanded to lay down their arms in connection with the crimes committed by the "free police".

In the province of Aleppo, in the village of Nabi Hara, an attempt was made on one of the field commanders of the Jaish al-Nuhba group. Assassinated the life of an influential militant of his "colleague" from the group "Ahrar al-Sham." As it turned out, the two groups did not divide the zones of influence and property taken from local residents.

For the same reason, militants of the Jebhat al-Shamiya and Jaish al-Islam groups in the Ashikibar village entered into a clash in the clash. Here they could not divide the house from which the family of civilians was expelled. In the village of Basut, the conflict broke out already within one group - the “al-Hamza division”. Her militants could not agree among themselves on who would receive the money from control over the supply of smuggled cigarettes to the area.

In the province of Hasaka, militants continue to loot. Thus, members of pro-Turkish groups occupy houses abandoned by civilians in the zone of the operation "Source of Peace" conducted by the Turkish armed forces. For example, the militants Ahrar al-Sharqiya and Al-Jabhat al-Shamiya, numbering about 900 people, arrived in the city of Ras al-Ain, in the northern part of Hasaki province. They occupy the homes of local residents, and settle in houses not only themselves, but also lodge members of their families.

Against this background, it no longer seems surprising that Bassam Sioni, a member of the HTSh shura, resigned from his post. Just yesterday, we reported that the influential field commander Abu Malik at-Talik left the ranks of this group, expressing disagreement with its policy, and now the second notable figure is leaving the KhTS.