Import substitution in a crisis: cancel and reset? 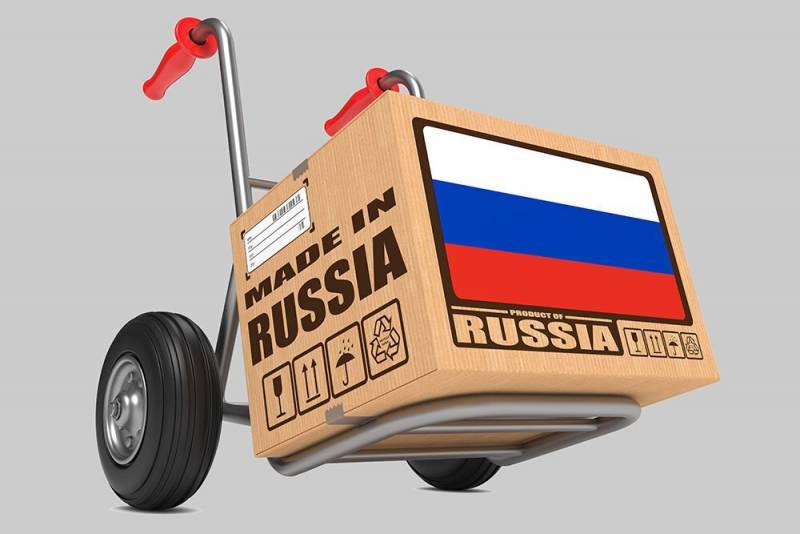 Crisis is not war, it won’t write off everything

The situation with import substitution in Russia in a pandemic and general self-isolation painfully resembles a bearded anecdote:

- Darling, what should you bring from abroad?

- Bring what you want. Now everything is being treated.

In mid-March, when quarantine in Russia had not yet been announced, the Ministry of Agriculture of the Russian Federation proposed temporarily (until the end of September) to reset duties on the import of agricultural products, raw materials and finished food to Russia. But "temporality", in accordance with our traditions, too often turns into constancy. Moreover, import substitution of agricultural raw materials and prepared food has not been discussed for a long time from official stands.

But excuse me, what kind of geography of food imports are we talking about today, when almost all commercial products in the world are directly or indirectly affected by COVID-19? Alas, the geography of possible imports is not explained ... And besides, doesn’t this mean the abolition of duties on the actual abolition of the food embargo for the West?

The agency sent a letter proposing the abolition of duties to 21 industry associations. Such an “innovation” is justified by the fact that the abolition of those duties was proposed “in order to curb rising prices for socially significant products”. Is that why the Ministry of Agriculture is considering "the possibility of initiating the zeroing of import duties on certain groups of goods and raw materials for the production of agricultural products"?

Note that the proposed solution will be distributed to all EAEU countries in view of the common customs and tariff policy of the member countries prescribed by the member countries of the union. Well, then what about the recently announced integration agrarian projects in the EAEU? So they will remain declarative? Does the crisis write everything off?

It’s not forever, it’s worse - for a long time

However, it seems that this is not only about the food assortment. Say, the head of Soyuzmolok, Artyom Belov, considers it "advisable to abolish duties on a number of goods that seriously affect the cost of dairy products." According to A. Belov, which is shared by many farmers, goods whose import must be duty-free should be, for example, “equipment of this sub-sector and spare parts for it, packaging materials, veterinary preparations, pedigree cattle, genetic material and much more.”

And this is not surprising, since in the production of Russian dairy products (including cheeses), even according to official figures, the share of technological equipment from non-CIS countries still exceeds 60%. For other mentioned positions, the contribution of foreign countries is at least the same 60%.

Obviously, a significant import substitution for agricultural raw materials and finished food is hardly possible without a self-sufficient national production and technological base. But in this segment, real financing, public and private, as a whole does not reach 40% of real needs. And, of course, it will be reduced in connection not only with the pandemic and its consequences, but also with the actual collapse of the ruble.

Alas, in the current economic conditions (when, above all, world oil prices determine the price of the ruble), business and the state do not risk fully investing in the industrial base of the agro-industrial complex. It is understandable: such costs are time-consuming and much more significant in comparison with investments in the production of agricultural raw materials. But oil prices, as you know, do not linger for a long time ...

One way or another, but the actual volumes of deliveries of agricultural raw materials and prepared food from non-CIS countries to the Russian Federation over the past four years, according to estimates by analysts from the Timiryazev Academy, have generally decreased by no more than 15%. Moreover, large volumes of re-export to the country (through other EAEU countries) of food and agricultural raw materials from countries included in the Russian countersanctions are preserved.

Since no harsh measures against such re-export are still being undertaken to this day, it is reasonable to assume that the real situation with import substitution for agricultural raw materials and finished food products is not as harmonious as it was officially presented until recently by the Ministry of Agriculture, the Ministry of Economic Development, the Ministry of Industry and Trade.

Meanwhile, problems with the material and technical base persist in the fruit and vegetable sub-sector. Therefore, in the Fruit and Vegetable Union of the Russian Federation, it is considered possible to consider temporary zeroing of duties not on finished products of the industry, but on the material and technical resources used in the cultivation and processing of vegetables and fruits. “This is a challenge for the future,” says Mikhail Glushkov, head of the union. “This approach is more important than temporarily zeroing the import duty, for example, of potatoes.”

The Ministry of Agriculture also seems to be offering duty-free imports of beef, pork, and offal. For against the abolition of duties on these goods is the National Meat Association. According to estimates of which, the capacities in the meat sector of the Russian agro-industrial complex are able to provide the predominant part of domestic demand.

The All-Russian Association of Fisheries Enterprises, Entrepreneurs and Exporters (WARPE) has the same position on the possible abolition of duties on fish products. According to the head of WARPE German Zverev, this decision “taking into account the situation with the ruble will not lead to lower retail prices for products, but will create additional benefits for foreign suppliers.”

Despite the embargo and all counter-sanctions, the share of imports from non-CIS countries in the technological support of the Russian agro-industrial complex, including the food industry, remains at the level of 65-70%. Such an assessment is made by almost all profile structures, up to Rosstat. But, of course, they are not obliged to provide data from the US Department of Agriculture, which estimates this level as at least 75%, which makes the Russian market so attractive for technological imports.

It is clear that such imports also will not fall in price, even because of the coronavirus. Therefore, G. Zverev is absolutely right in his doubts about the "cheapening" of imported products. Again, due to the higher cost of imports due to the current rate of Russian money. The ruble is weakening, which means that the cost of imports of agricultural equipment and other technological components for the agricultural sector is growing.

According to Forbes magazine (December 6, 2019), the real situation with import substitution in Russia, including in the agricultural sector, is due to the fact that

“The domestic market of the Russian Federation does not provide sufficient demand due to a drop in the purchasing power of consumers. Therefore, it is easier and cheaper to buy abroad in the right amount than to produce in a warehouse. ”

Even in translation, the design of Forbes analysts is not easy to read, but the point is clear. In order to ensure the required volumes of Russian production of analogues of equipment and components imported from far abroad, time and large investments are needed, but they are not. We also need a long-term revival of domestic demand. But this is not even expected in modern conditions. Moreover, these conditions, as it turns out, alas, are far from short-lived.

Instead of postscript. To quote Andrei Slepnev, Minister of the Eurasian Economic Commission for Trade:

“In the shortest possible time, we will work out the entire final list of goods for which, on a temporary basis, tariff protection will also be reset, duties will be reduced.”

We are in Yandex Zen
Coronavirus COVID-19: threats, consequences, actions
Situational analysis of the death of the MH17 flight (Malaysian Boeing 777), made on the basis of engineering analysis from 15.08.2014
173 comments
Information
Dear reader, to leave comments on the publication, you must to register.