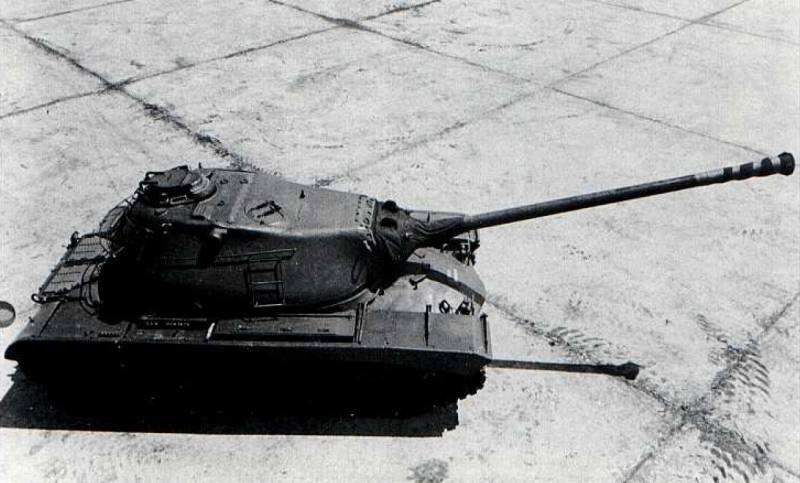 One of the first tanks T43. Photo from the book "Firepower: A History of the American Heavy Tank"

After World War II, the USA continued to develop promising heavy tanks, but the first projects of this kind were unsuccessful. Since 1948, work was underway on the T43 project, and a few years later the resulting tank entered service under the designation M103. As a result, he was the last heavy tank in the United States.

In the early stages

In 1948, the Detroit Arsenal, using available technologies and components, developed the design of the T43 heavy tank. This machine received a thick inclined homogeneous armor and a 120-mm rifled gun for a separate loading shot. It was assumed that such a combat vehicle would be a worthy response to the heavy tanks of a potential enemy.

The army showed limited interest in this project, which is why the work did not go too fast. Only at the end of 1950, against the backdrop of the Korean War, a technical project was completed, and at the very beginning of 1951 a contract with Chrysler appeared. The contractor was to build six prototypes of the original project. The first tank was launched for testing in November of that year.

During the tests of the T43 tanks, a number of shortcomings and problems were revealed. They were proposed to be fixed when creating an improved project called T43E1. In parallel, the development of the main gun and ammunition for it was carried out. In October 1953, all design work was completed, and the tank was ready for a new stage.

Tank version T43E1 in trials. Photo Tanks-encyclopedia.com
Already in December, Chrysler launched a full-scale series. Until June 1954, they managed to build 300 tanks of an improved version of the T43E1. After that, the assembly of M51 armored repair and recovery vehicles based on the new tank began. Until 1955, inclusively, 187 units of such equipment were built.

Separate production tanks went for control tests - and could not cope with them. For a number of parameters, the equipment did not meet customer requirements. Testing and refinement continued until mid-1955, and after that the tanks decided to send for storage.

The T43E1 project completed the formation of the final appearance of a promising heavy tank. In the future, the design was repeatedly refined, the composition of the equipment changed, but in principle the tank did not change.

The T43E1 was a heavy armored vehicle of a traditional layout with a 120-mm rifled gun. Finished components were widely used in the construction, including borrowed from other tanks. This approach simplified the design, but led to certain problems. 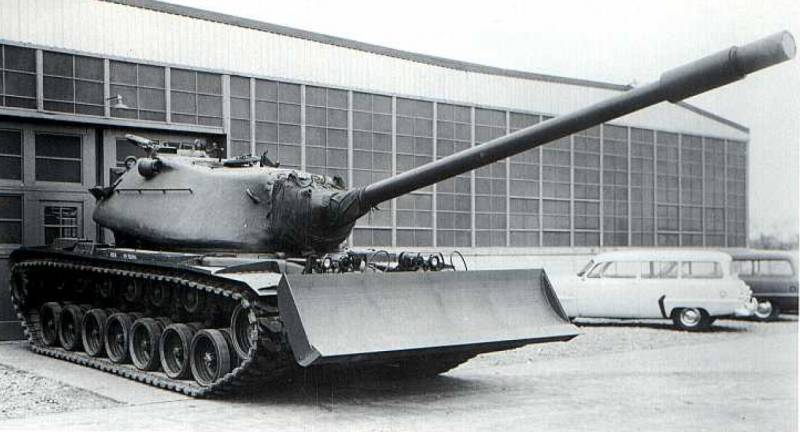 Tank T43E1 with a dozer blade T18. Photo from the book "Firepower: A History of the American Heavy Tank"
The hull of the tank is welded, assembled from cast and rolled parts. The frontal armor was up to 127 mm thick with a slope of 60 °. Boards - up to 51 mm. The cast tower had a 127 mm forehead and a mask up to 254 mm thick. Boards - from 70 to 137 mm. It was assumed that such armor would be able to protect the tank from the main foreign tank guns.

At the rear of the hull was a power unit based on the Continental AV-1790 gasoline engine with a capacity of 810 hp, borrowed from the M48 tank. The chassis had seven road wheels with torsion bar suspension on each side. In the future, the power plant and chassis were revised. 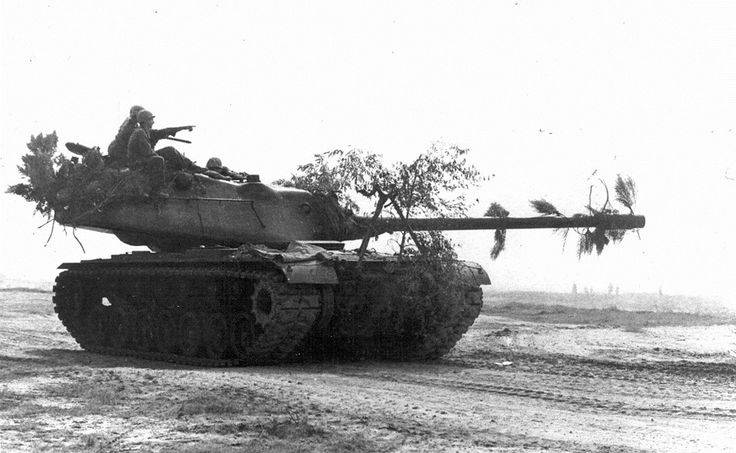 M103 front part. Photo Tanks-encyclopedia.com
There was a simple fire control system based on optics and other devices. As the project developed, its composition changed - new devices were added, up to the ballistic computer.

The crew consisted of five people. The driver was located inside the hull, the rest - in the fighting compartment. A gunner worked to the right of the gun, two loaders to the left. The commander was in the niche of the tower behind the gun, above its place there was a turret of the M11 type. He was also responsible for the use of radio equipment.

The T43A1 tank had a combat weight of 58 tons with a length of 11,3 m (with the gun forward), a width of 3,76 and a height of 2,88 m. The estimated speed reached 32-34 km / h, the actual speed was less. Estimated power reserve - 130 km. The tank could overcome various obstacles. It was lighter than other heavy tanks of its time, which imposed less restrictions on mobility and use. 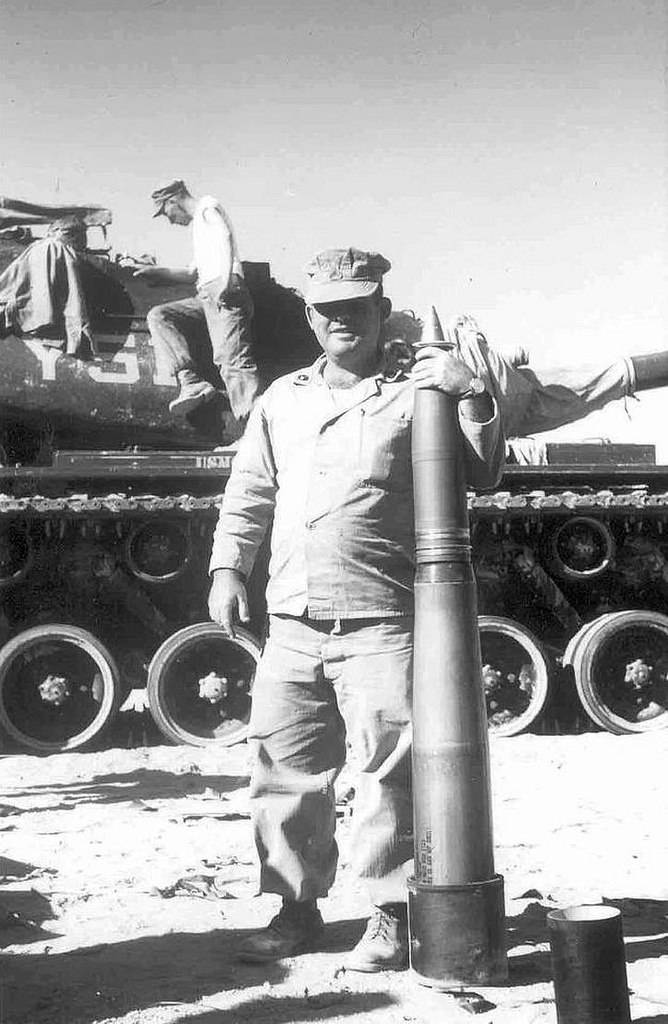 Marine Tanker demonstrates a 120-mm round with a M356 shaped-charge projectile. Photo US MC

Tests of the serial T43E1 ended unsatisfactorily. One of the main reasons for criticism was the lack of mobility and high fuel consumption associated with the use of a power unit from a medium tank. Outdated fire control devices did not allow to realize the full potential of the gun. These and other problems led to the temporary abandonment of the tank and to the sending of finished equipment for storage.

The project was finalized with the installation of a new transmission and other devices. We also improved weapons: in particular, the design of the muzzle brake changed and an ejector appeared. A couple of the existing T43E1s were rebuilt according to the updated project T43E2. In a new form, the real characteristics of the tanks were closer to the calculated ones. In 1956, it was decided to put the tank into service under the designation 120 mm Gun Combat Tank M103.

It was planned to rebuild the existing tanks from storage according to the updated project and send them to combat units. However, in 1956-57. altered only 74 cars. Soon, the Marine Corps wished to pick up 219 (according to other sources, 220) heavy tanks, but initiated a new modernization. It was completed in 1959, the finished machines were designated as M103A1.

Project A1 included the installation of a stereoscopic sight for the T52 gunner and the M14 ballistic computer. Changed the electrical rotation mechanism of the tower and turret basket. One of the coaxial machine guns was removed from the gun mount. 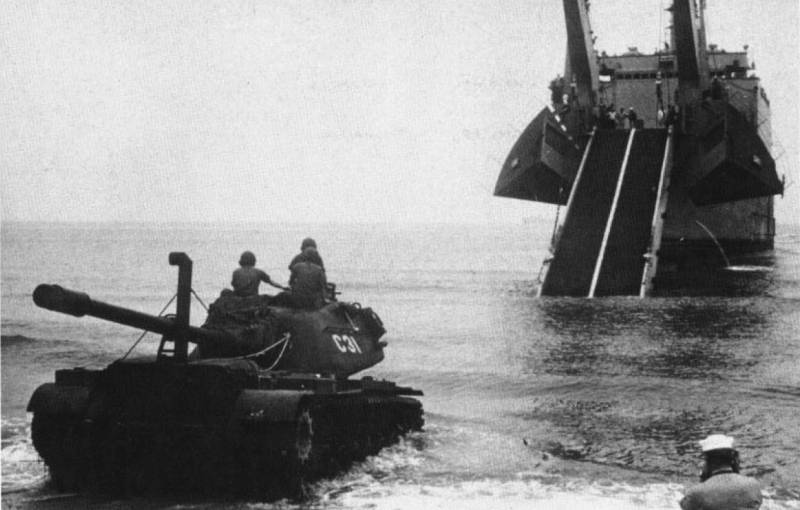 Marine tank M103A2 takes part in maneuvers, 1947. Photo by US MC
The last major modernization was carried out in 1964 in the interests of the ILC. 153 tanks received a power unit from the M60, made on the basis of a 1790 hp Continental AVDS-2-750 diesel engine. Due to this, the maximum speed increased to 37 km / h, and the power reserve - up to 480 km. Also replaced some fire control devices. Upgraded tanks were designated as M103A2.

The heavy tank M103 officially entered service in 1956, but the actual supply and deployment of equipment extended over several years. The first units to receive new equipment were those in the most critical areas.

Already in 1956, a couple of experimental T43E2 were sent to Germany. In January 1958, the 7th heavy tank battalion (later the 899nd battalion of the 2rd tank regiment), equipped with M33 vehicles, appeared in the "German" 103th US Army. The battalion included four companies with six platoons each. The platoon had three tanks, the battalion - 72, i.e. the whole available fleet of new heavy tanks was sent to Germany.

The ILC brought the M103 heavy tanks into companies as part of tank battalions. Also, similar equipment was available in reserve units. According to well-known data, the M103 Marine Corps were exported from US territory to various overseas bases and returned back, as needed. 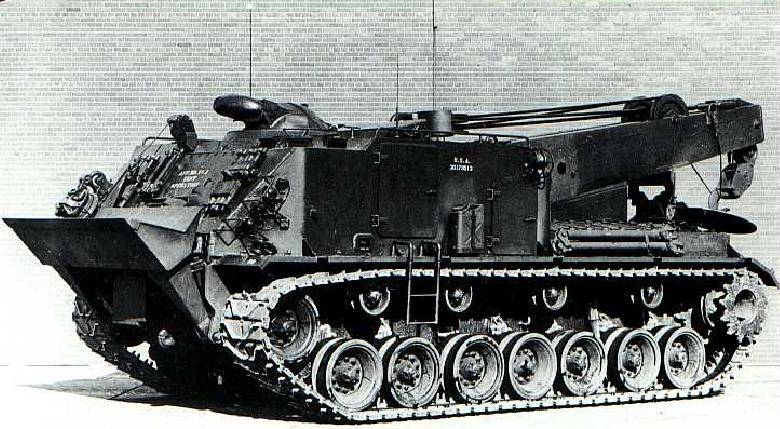 Repair and recovery vehicle M51 ARV based on the T43 chassis. Photo from the book "Firepower: A History of the American Heavy Tank"
Military operation revealed new design flaws. The diesel engine, despite the economy, did not allow to obtain good mobility. The power unit withstood only 500 miles of the road, after which it needed to be repaired or even replaced. The chassis was not reliable. The layout of the internal compartments was unsuccessful and complicated the work of the crew.

In addition, by the early sixties, the M103 had ceased to meet the requirements of the times. He had no protection against weapons mass destruction and not all specifications meet current requirements. It also turned out that intelligence had previously overestimated the Soviet heavy tanks, and in a collision with medium T-54 / 55s, the M103 parameters turned out to be excessive.

In terms of the combination of technical, combat and operational characteristics, the heavy tank M103 quickly became obsolete. In addition, the M60 has already appeared - the first full-fledged main battle tank of the United States, combining high mobility and firepower. Thus, the M103 was no longer of interest to the army; the prospects for the entire direction of heavy tanks were questioned.

In the early sixties, the ground forces began mass development of the M60 MBT, and by 1963 this led to the complete abandonment of the heavy M103. KMP was in no hurry to write off its equipment and carried out modernization under the A2 project. However, later, in the early seventies, the Marine Corps also began rearmament. By 1974, obsolete heavy tanks again gave way to promising main tanks. 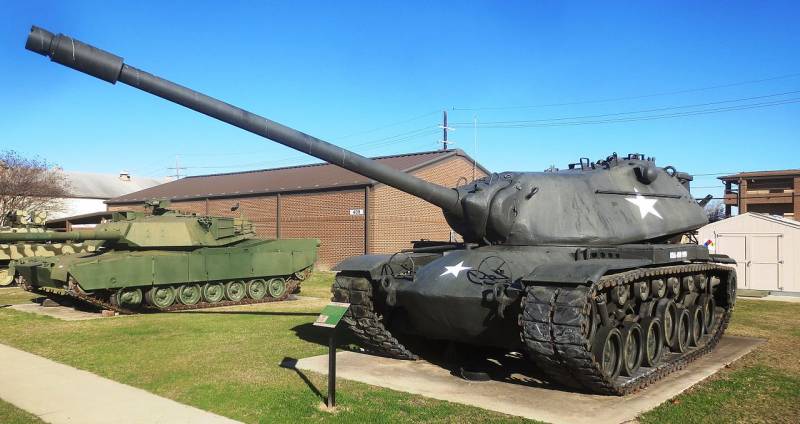 Museum M103 based on Fort Hood. Wikimedia Commons Photos
Thus, for all the time, from 1951 to 1955, approx. 300 T43 tanks of two modifications, subsequently repeatedly subjected to modernization. Operation in the army lasted less than five years, and in the ILC - three times longer. During all this time, tanks repeatedly participated in maneuvers, but never went into battle.

After removal from service, the decommissioned equipment was sent to storage bases or was disposed of. Also, do not forget about museums. According to well-known data, 25 tanks of all the main modifications in service were preserved. The technique is in various museums, including at military bases in the United States. Tanks have a different state, some of them are still on the move.

The heavy tank T43 / M103 was long and difficult to go to military service. To achieve the desired potential, several successive upgrades were required. At the same time, the amount of equipment remained small - only 300 units, including all prototypes.

Against the background of these processes, preparations were under way for a new breakthrough in tank building. At the turn of the fifties and sixties, the U.S. Army received its first main tank, and the concept of a heavy tank was finally and irrevocably outdated. A replacement for the M103 was no longer created in its class. The future was for MBT.

We are in Yandex Zen
Heavy tanks of the USSR in the postwar period
American heavy
52 comments
Information
Dear reader, to leave comments on the publication, you must to register.