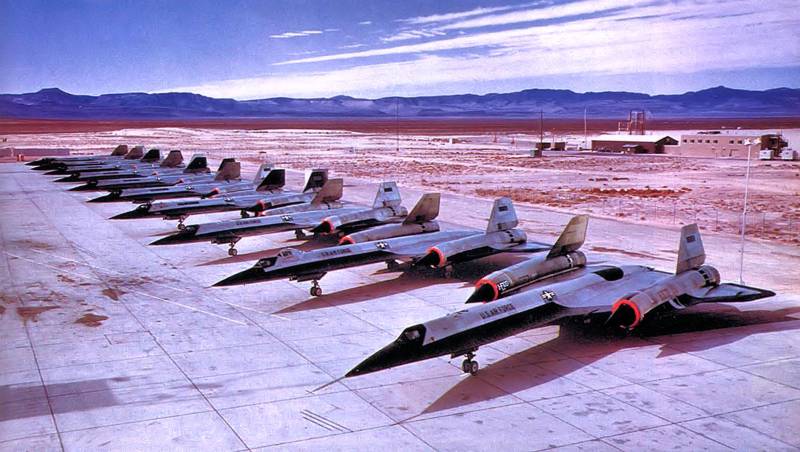 Aircraft Lockheed A-12 in the parking lot of the plant number 42 in Palmdale. Photo US Air Force

In the mid-sixties, the CIA and US Air Force received the latest reconnaissance aircraft A-12 and SR-71. These machines, unified in the main part of the units, were distinguished by extremely high flight and technical characteristics that made it possible to effectively solve the main problems. However, achieving maximum speed at the level of M = 3,3 and a flight altitude of more than 25 km proved to be an extremely difficult task, which required fundamentally new design solutions and technologies.

The development of the A-12 and SR-71 projects was carried out in the Lockheed branch with the unofficial name of Skunk Works. The creation of new aircraft began with research work and the search for optimal technical solutions. At this stage, it was established what problems the “three-swing” aircraft faces. Then the search for suitable technologies began. 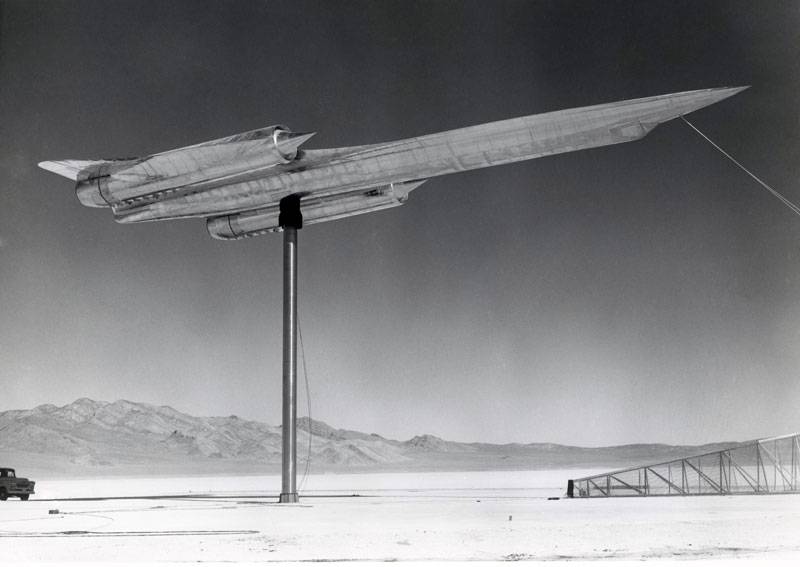 Model A-12 while studying radar signatures, 1959. Photo by the CIA / cia.gov
One of the central problems was aerodynamics. Flying at a speed of approx. M = 3 has its own characteristics, which must be taken into account when forming the appearance of the aircraft. However, reaching such speeds was also not easy. For this, special engines were required that could work equally efficiently at all high-speed modes.

At the required flight speeds, the problem of thermal loads had to fully manifest itself. It was necessary to protect the glider from overheating, deformation and possible destruction. With all this, the aircraft had to be highly durable, since at the operating speeds even the simplest maneuvers were associated with overloads.

A separate requirement affected the visibility of the aircraft to the enemy. By that time, the leading countries managed to build a developed network of radars to control airspace, which is why the issue of reducing radar visibility has become urgent. This problem should be considered when developing a glider. 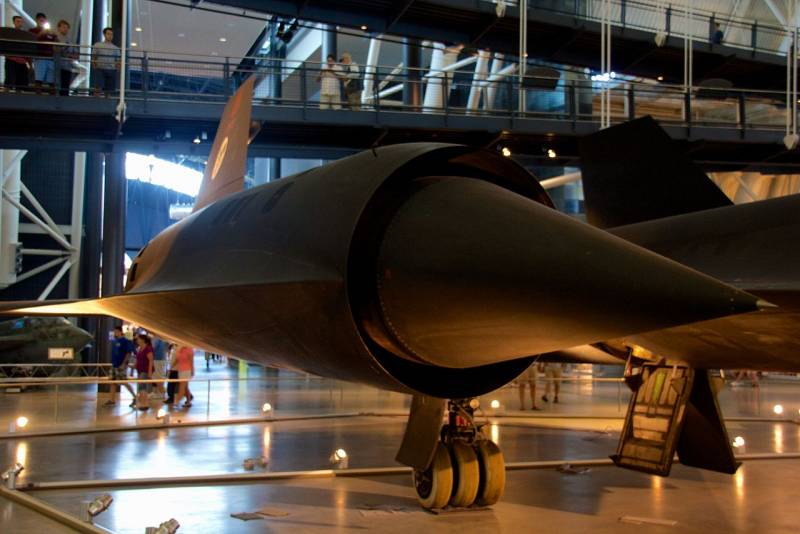 The nacelle of the aircraft SR-71. Wikimedia Commons Photos
Finding solutions to the expected problems was not easy and quick. Work on the A-12 aircraft for the CIA was launched in 1957 and continued for several years. During this time, the general concepts and approaches to the design have changed several times. The first flight of the prototype aircraft was completed only in 1962. The SR-71 scout for the Air Force was developed on the basis of a ready-made machine, which allowed to significantly accelerate the work.

The solution to the main part of the expected problems was directly related to the design of the airframe and general aircraft systems. After a long search, it was possible to find the best version of the aerodynamic shape. The “tailless” scheme with developed influxes in the bow and central part of the fuselage and a pair of keels were considered the best. The applied scheme made it possible to obtain high lifting force and improve flow around at all speeds. In addition, the bending moment in the bow was sharply reduced. 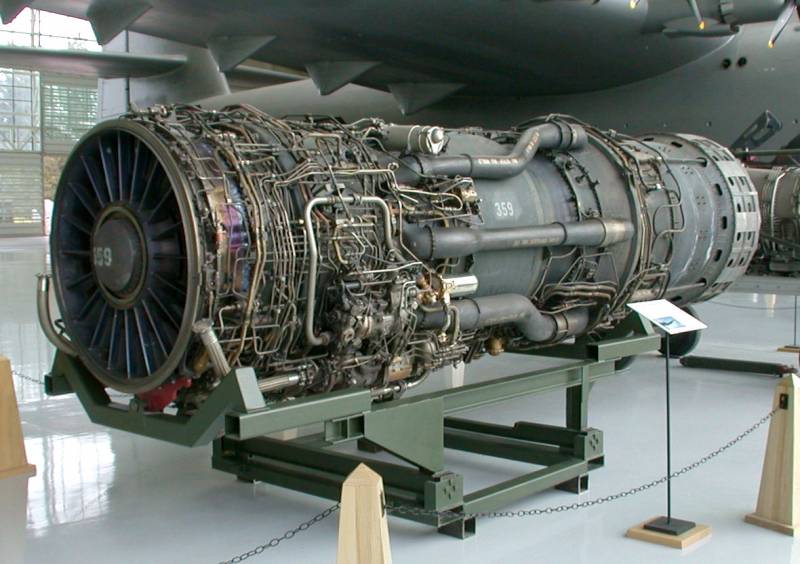 Pratt & Whitney J58 engine. Photo Wikimedia Commons
Special glider contours made it possible to partially disperse signals from the radar. In some sections of the airframe, where the design allowed it, there were parts made of radar absorbing materials. However, reducing visibility was not the main objective of the project, and there were other factors that partially leveled all the design achievements in this area.

The issues of thermal protection, mass and strength were solved with the help of titanium and its alloys. The glider was 85% of them. Other parts were made of heat-resistant grades of steel, ceramics, etc. Glazing of the cockpit lantern made of quartz glass. For mechanical and thermal strength, it was connected to a glider using ultrasonic welding.

According to calculations, during the flight, the average skin temperature should have reached 260 ° C, the maximum at the leading edges - up to 400 ° C. In this regard, the airframe provided for numerous pipelines for circulating fuel, removing excess heat and preheating the fuel. 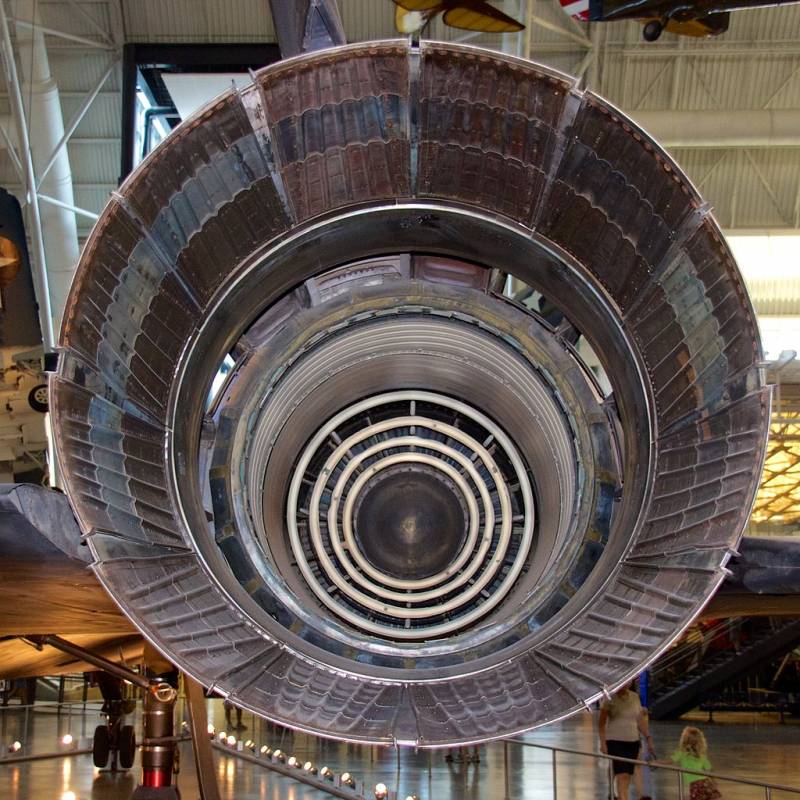 Nozzle apparatus of the engine. Wikimedia Commons Photos
The titanium design retained strength when heated - but changed dimensions. At cruising speed, the A-12 and SR-71 lengthened by several inches. This problem was taken into account during the design and provided for special gaps in the casing, internal structures and even in the fuel system. As a result, fuel literally oozed from the plane on the ground, but after acceleration the leak stopped. Also, part of the casing was made of corrugated sheets.

The A-12 and SR-71 aircraft used the unique JT11D / J58 family of hybrid engines from Pratt & Whitney. Their design combined turbojet and ramjet engines with the possibility of joint or alternating operation. Maximum thrust, depending on modification, 20-25 thousand pounds; afterburner - 32,5 thousand pounds. 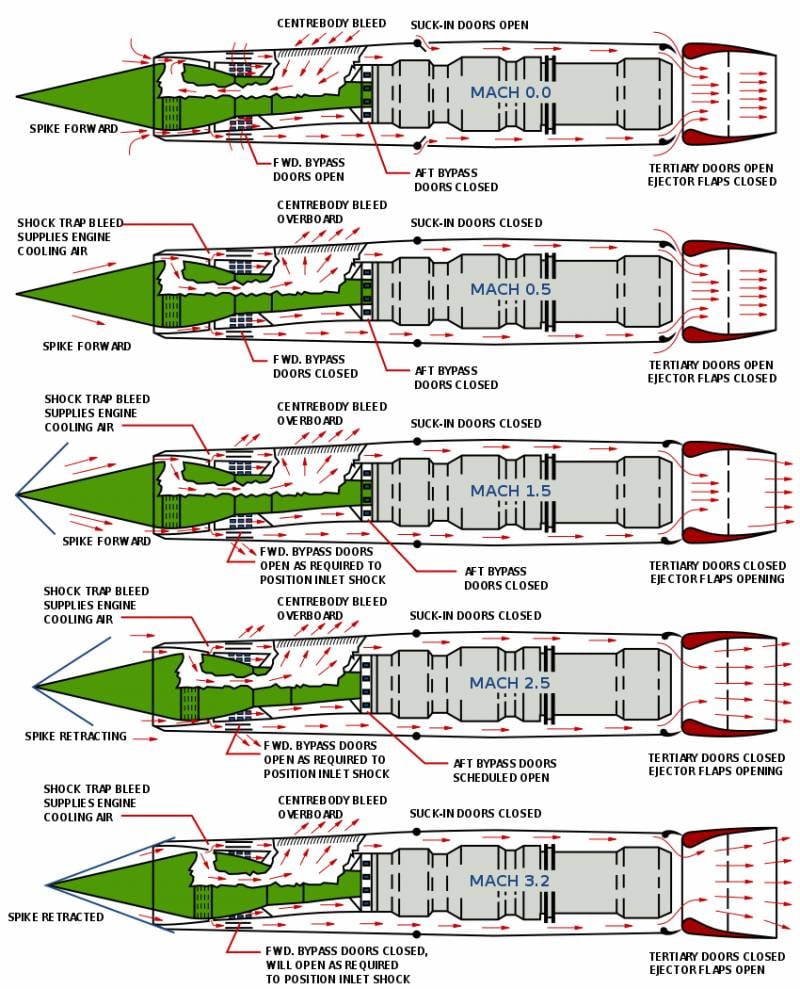 J58 engine running at different speeds. Wikimedia Commons Graphics
The core of the J58 engine was a turbojet placed inside a once-through unit with an assist fan. The air intake device was equipped with a movable central body; there was also a set of hatches and sashes for controlling the incoming flow. The air intakes were controlled in accordance with flight modes using a separate computer.

At supersonic and supersonic speeds, the air intake cones were in the forward position and optimized the flow at the engine inlet. With increasing height and speed, they were shifted back. At speeds greater than M = 3, the air flow was divided between ramjet and turbojet engines, which created 80 and 20 percent. traction accordingly.

The J58 engine used kerosene-based special JP-7 jet fuel. Under normal conditions, it was characterized by increased viscosity, but when heated, it did not differ from standard compositions. Fuel was also used as part of the lining cooling systems, cabs, instrument compartments, etc. It was used as a working fluid in nozzle control hydraulics. The heated liquid immediately entered the engine and burned out. 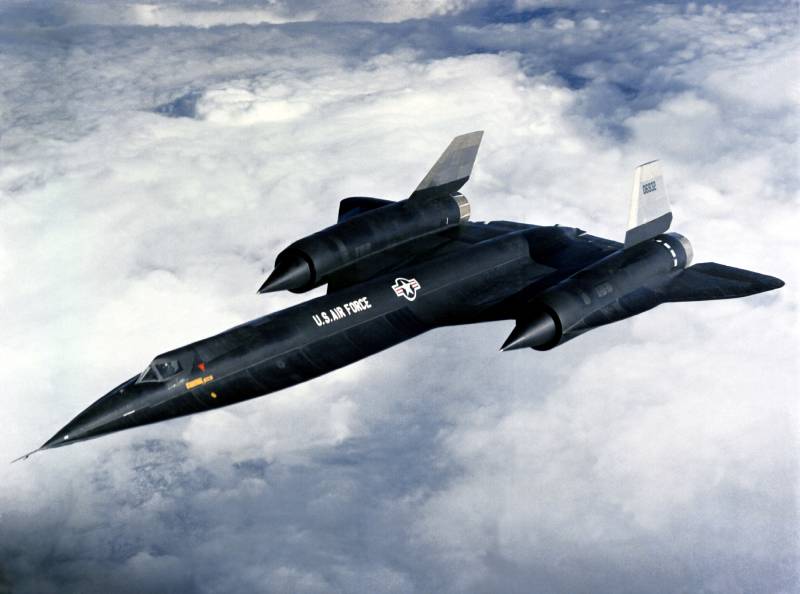 Scout A-12 with Air Force identification marks in flight. Photo US Air Force
The engine was started by injection of the so-called starting fuel - liquid triethylborane (TEB), flammable in contact with air. Each J58 had its own TEB tank for 16 engine / afterburners. The engines used special silicone grease optimized for high temperatures. At temperatures below zero Celsius, this composition hardened, which complicated the operation of the equipment.

Skunk Works and allied businesses have successfully completed all of their tasks and created aircraft with uniquely high flight performance. However, this took several years and significant financial expenses, and the resulting aircraft were distinguished by a high production cost and complexity of operation. 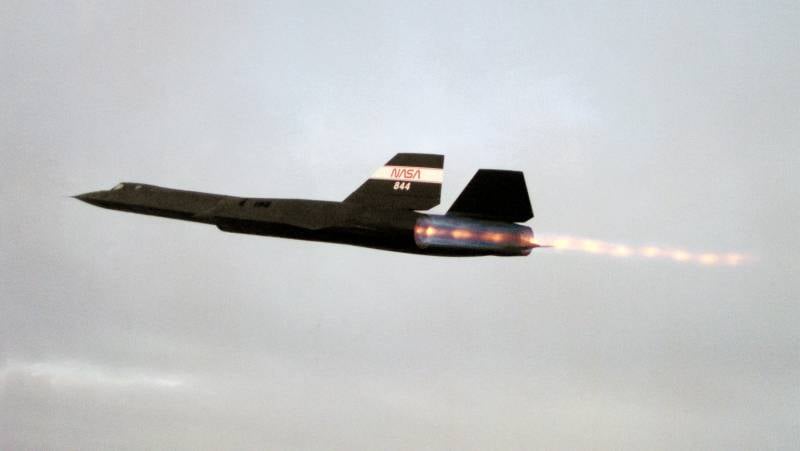 Afterburner flight. NASA Photos
The development of the project and the search for all the necessary technologies took several years. The launch of production was also associated with certain problems. For example, the memoirs of the head of Skunk Works Ben Rich mentioned difficulties in obtaining titanium. The United States did not have such raw materials, which is why it was necessary to arrange a whole operation for its purchase in the USSR through shell companies.

In the interests of the CIA built 15 aircraft of the main modifications. The Air Force received 32 units. The contract with the Air Force provided for the cost of one SR-71 at the level of 34 million dollars (more than 270 million at current prices), and the production program was record high for its time.

Operation was also difficult and expensive. Preparation for the flight took several days. After each flight, the aircraft required 650 different checks and procedures that took several hours. After 25, 100 and 200 hours of flight, a thorough inspection with partial disassembly was required, which took several working days. Engines were sent to the bulkhead after 200 hours of operation, and after 600 hours for major repairs. 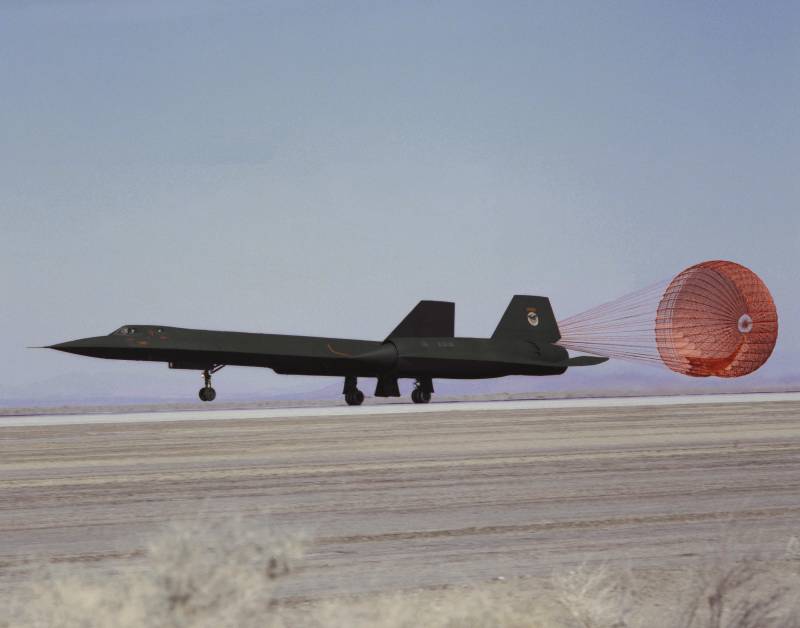 SR-71 is landing. NASA Photos
Shortly before the cancellation of the SR-71, it was openly reported that the flight hour of such an aircraft costs approx. 85 thousand dollars. The operation of one machine annually cost at least 300-400 million.

However, the CIA and the Air Force received a special tool with the highest performance. A-12 and SR-71 could operate at altitudes of at least 25-26 km and reach speeds of up to M = 3,3, which for many years saved them from the air defense of a potential enemy. During the operation, the CIA lost 6 of its A-12s, the Air Force - 12 units of SR-71. There were no combat losses.

The operation of the A-12 aircraft lasted only a few years - until 1968, the Air Force used its SR-71 until 1998, and NASA wrote off the equipment a year later. Aircraft of two models and several modifications, having a special design based on advanced technologies, could show outstanding tactical and technical characteristics. However, for the same reason, they were excessively expensive and complex. By the time they were abandoned, more convenient and effective intelligence tools appeared.

A direct replacement for the A-12 / SR-71 did not appear - spacecraft have long and firmly occupied the niche of reconnaissance aircraft. As a result, new designs aviation Techniques with comparable characteristics have not yet appeared in the United States. However, Skunk Works high-speed aircraft projects created a serious scientific, technical and technological base for the further development of military and civil aviation. Those or other solutions proposed in the past are still actively used.

Ctrl Enter
Noticed a mistake Highlight text and press. Ctrl + Enter
We are
An-12 in AfghanistanAt the speed of reason
70 comments
Information
Dear reader, to leave comments on the publication, you must to register.