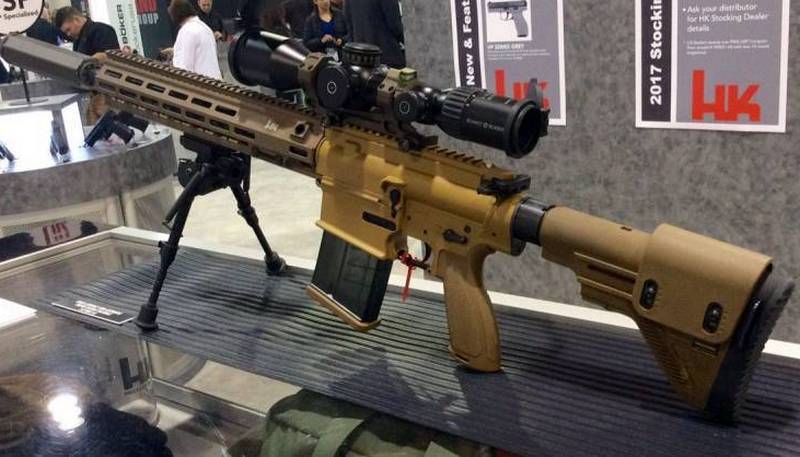 US Army snipers are moving to the new M110A1 rifles. According to thefirearmblog.com portal, the first batch of M110A1 rifles was transferred to the troops.

Heckler & Koch Defense is pleased to announce the first batch of M110A1 for the US Army. This delivery is the first of many that will eventually comprise from 5000 to 6000 complete weapon systems
- The press service of Heckler & Koch USA reported.

The M110A1 rifles will replace the M110 rifles manufactured by the American company Knight's Armament Company in the US Army, which entered service in 2008. The soldiers who used the M110 in combat conditions complained about the low accuracy, unreliability and fragility of the M110 (after 500 shots, the accuracy of fire decreased sharply). Therefore, in 2014, the U.S. Department of Defense announced a new tender for the purchase of compact semi-automatic sniper rifles .308 Win (7,62 × 51 NATO) caliber, which can be effectively used for shooting from distances up to 1000 m, and will also be lighter and more compact than the M110.

In 2016, the US Department of Defense named the German company Heckler & Koch the winner of the CSASS tender. To replace the M110, the army adopted a modernized version of the HK G28 rifle, which received the designation M110A1.

The Heckler & Koch G28 sniper rifle was developed by order of the Bundeswehr. G28 uses gas venting with a short piston stroke and a rotary shutter. The effective firing range is about 600 m for the chest target and about 800 m for the growth target. When firing a series of ten shots from a distance of 100 m, the maximum dispersion was 4,5 cm, which corresponds to 1,5 arc minutes.

We are in Yandex Zen
American snipers armed with German rifles
US expert community is trying to identify ways out of the Afghan impasse
19 comments
Information
Dear reader, to leave comments on the publication, you must to register.