Serbian fleet away from the sea

The collapse of the Socialist Federal Republic of Yugoslavia, caused by the surge in nationalism actively supported by Western "democracies", was a true tragedy. A series of interethnic conflicts, territorial claims, economic collapse, as well as actual US intervention accompanied the period of the country's collapse. Against this background, the annihilation of the once modern and sufficiently combat-ready for the tasks of the fleet of Yugoslavia was almost imperceptible. 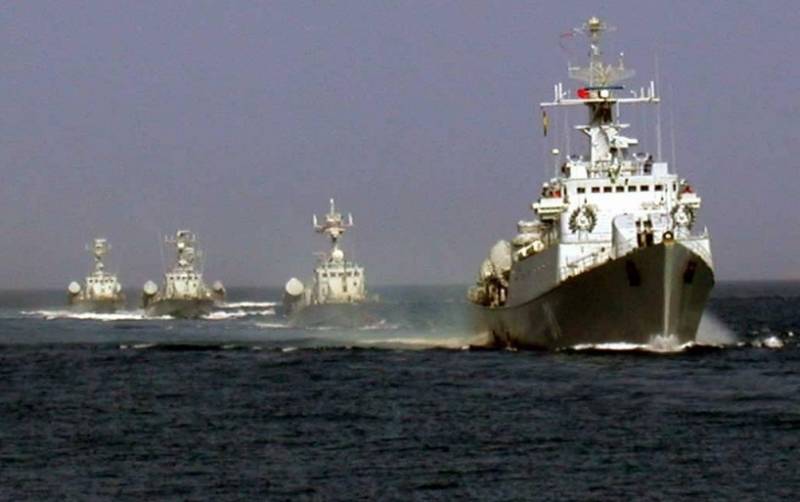 Navy SFRY
The Navy of Yugoslavia at the time of the collapse approached with personnel of more than 10 thousand people. The fleet was armed with more than 80 ships and submarines. The surface fleet mainly consisted of “green water” ships, since they had quite specific tasks: protecting the coastline and coastal islands, as well as preventing blocking by the enemy the Otranto Strait (now between Albania and Italy), connecting the Adriatic and Ionian Sea . The fleet also had significant coastal defense assets: artillery (about 400 guns from 88 mm to 152 mm) and missile (for example, Rubezh DB).

From Navy to Flotilla

After the collapse of "Greater Yugoslavia" in 1990-1991, when Bosnia and Herzegovina, Slovenia, Macedonia and Croatia jumped out of the country, the last newly emerged country with access to the sea got up to 20% of the country's fleet, because at that time some of the ships were being repaired at the shipyards of Croatia. Until now, Croatia operates missile and patrol boats built in the socialist Yugoslavia. However, sailors loyal to Belgrade in those troubled times still managed to withdraw from the Kopersky Gulf (southwest of the Italian Trieste), which belongs to another independent New European Republic, Slovenia, to one ship. They were located in the Bay of Kotor, then still belonging to the "Lesser Yugoslavia" (Serbia and Montenegro). 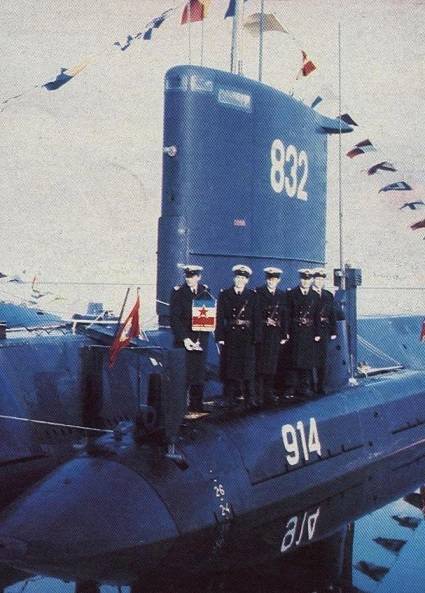 Yugoslav submariners
But “democracy” was advancing inexorably, therefore, Montenegro’s pro-Western and openly anti-Serb politicians first tackled the Serbian population to incite due heat, and then, under the cover of the desire for a European development path and other carrots, “Little Yugoslavia” was also destroyed. In May 2006, supporters of the liquidation of “Little Yugoslavia” won with a minimal margin in the referendum on the independence of Montenegro.

Naturally, the next division of the fleet, which still remained, began. At the same time, it was accompanied by the decommissioning and dismantling of many military units of the fleet for scrap. Submarines of the Sava type were destroyed, the same fate awaited two frigates, not counting the seven DBK Rubezh sold to Egypt. Geographical features, of course, left priority in the appropriation of those remaining for Montenegro. Until now, the Montenegrin fleet consists almost entirely of ships launched by Yugoslavia: from Kotor type frigates (P-33 Kotor and P-34 Pula) to Konchar missile boats (RTOP-405 Jordan Nikolov Orce "and RTOP-406" Ante Banina "). 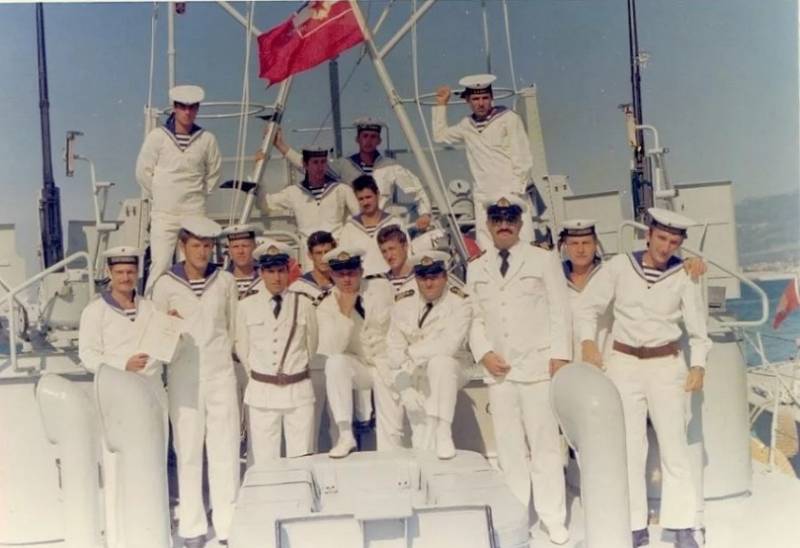 It is also worth noting that during the divide Montenegro appropriated the representative yacht of the government of Yugoslavia “Jadranka”. The Jadranka was built for Josip Broz Tito. Montenegrins did not have to ride on the legacy of Yugoslavia for a long time. By the middle of the second decade of the 21st century, the yacht was brought to a putrid state, rolled ashore, decommissioned from the balance of the fleet and put up for sale. The price, according to various sources, varies from 30 to 50 thousand euros. 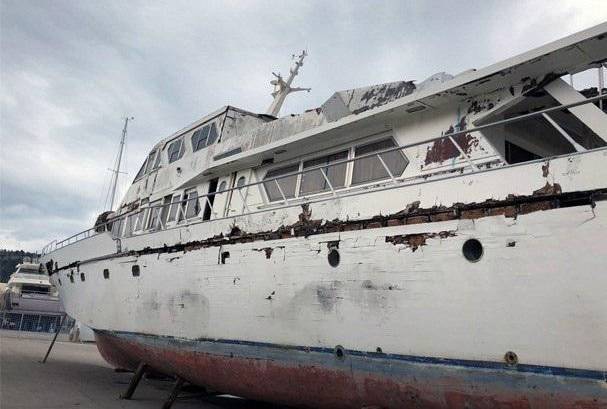 Modern view of the executive yacht "Jadranka"
Serbia also lost all coastal anti-ship systems, both missile and artillery. As a result, Belgrade got only the Danube river flotilla.

Danube River Flotilla of the SFRY

The Danube flotilla directly to the Socialist Federal Republic of Yugoslavia was born in 1944, although back in the days of the Kingdom of Yugoslavia the river flotilla on the Danube existed and included several monitors, boats and minzags converted from civilian tugboats. As before, and after the formation of the SFRY, the Danube River Flotilla was part of the Navy. It is noteworthy that even during the partisan war of the People’s Liberation Army of Yugoslavia from 1942 to 1945, the NOAU Navy not only existed, but also actively acted. It was probably the only partisan fleet in the world at that time. 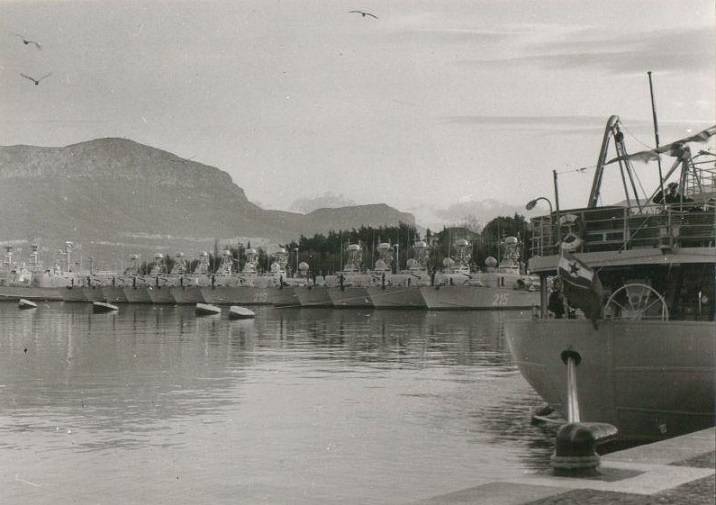 In 1960, the river flotilla was suddenly withdrawn from the Navy and transferred to the command of the 1st Army. This was followed by a reorganization, and again the flotilla was included in the Navy of Yugoslavia. Until 1985, the river flotilla was replenished with warships and participated in exercises. The few truly military operations of the flotilla were completely connected with the tragic events of the collapse of the good old Yugoslavia. On November 8, 1991, one of the flotilla minesweepers was sent to intercept a Czechoslovak ship with a cargo of smuggled weapons for Croatian formations.

The land fleet of modern Serbia

The modern "land" fleet of Serbia (officially in the Serbian language - the River Flotilla) in connection with the bloody geopolitical winds now conducts its history since 1915. It was in that year on August 6th from the slipways of the shipyard in Chukaritsa (the Serbian community that is part of the Belgrade district) that on the river Sava (the right tributary of the Danube), the patrol boat Yadar (“Kadar”), adapted for laying mines, descended . The first Serbian warship was designed by Djoke Popovic and Milojka Vanic. It is in memory of this significant event for the flotilla that August 6th is Serbia's River Flotilla Day. 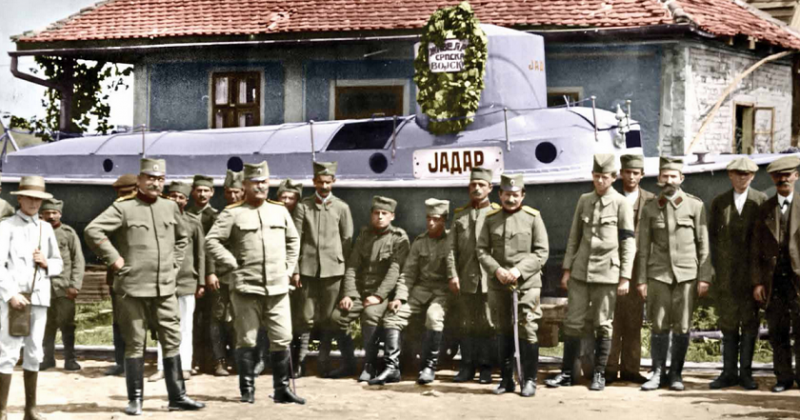 Patrol boat "Yadar"
The river flotilla on the Danube is now part of the land army of Serbia. The headquarters of the flotilla, which is currently commanded by Colonel Andria Andrich, is located in Novi Sad. The main units and ships are concentrated there, the remaining forces are based on Belgrade and Šabac. At the moment, the flotilla’s tasks as a tactical unit of the land army include transporting troops and equipment, as well as landing them on an unequipped shore, if necessary, ensuring safe navigation and participating in joint operations, including anti-terrorism. The flotilla is also attracted for solving non-combat tasks in the event of natural disasters and catastrophes.

The shipboard of a modest flotilla

A kind of flagship of the flotilla, on which the command is located, is one of the oldest active ships in the world - the Kozar. This ship was built in 1939 at the shipyard in Regensburg (Austria). During World War II, the ship was part of the German Danube flotilla under the name Krimhild. After the surrender of Germany, Crimhild became the US Oregon floating barracks. After the “demobilization” of the ship in 1946, it was transferred to private hands. It was only in 1960 that Yugoslavia in exchange for a cargo ship acquired the Krimhild-Oregon, introducing it into the fleet as a base ship under the name Kozara. 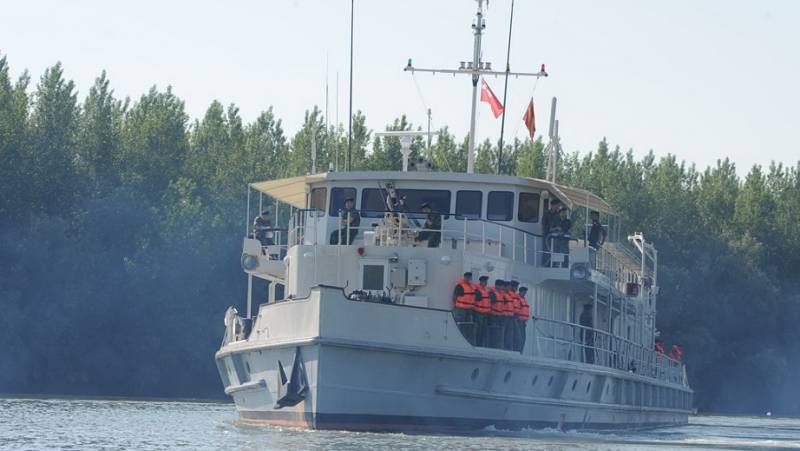 Flagship "Kozara"
In 2004, the Kozar ship underwent modernization and overhaul. At the moment, the crew of the ship is 47 people. Length - 67 meters, width - 9,55 meters, maximum draft - 1,45 meters. Displacement - up to 600 tons. The maximum speed is 21 km / h (when moving downstream, the speed increases to 25 km / h). Armament - three triple-barreled 20-mm anti-aircraft mounts M55 of Yugoslav production (Zastava M55). Also, "Kozara" can carry a stockpile of mines of various types, and it is also possible to place up to 250 soldiers with equipment.

The main, so to speak, flotilla strike force is four river minesweepers of the Nestin type: RML-332 Titel, RML-335 Apatine, RML-336 Jerdap and RML-341 Novi Sad. All of them were built at a military shipyard in Belgrade from 1976 to 1980. Ships are used for counter-terrorism operations, protecting infrastructure and ships in basing areas, assisting ground forces units and ensuring the safety of navigation.

Minesweepers of the Nestin type of Serbia
The total displacement does not exceed 78 tons. Length - 26,9 meters, width - 6,5 meters. The maximum speed is 28 km / h. The crew is 17 people. Armament: a four-barreled 20-mm gun M75 class IV and two 20-mm guns M71 class I. The oldest in firepower in the series is Novi Sad, armed with two four-barreled 20-mm guns, but it was modernized already in 1999.

The next most popular in the flotilla are project 411 landing boats. Previously, these boats were part of a group of 32 sistership ships based in the region of Kumbor (Montenegro). Only a few boats went to Serbia. And it was only because of the necessary repairs and modernization that they were driven along the inland waterways to the territory of Serbia, after which they became part of the river flotilla. Now they are used both for transporting manpower and equipment, and as assault landing boats. 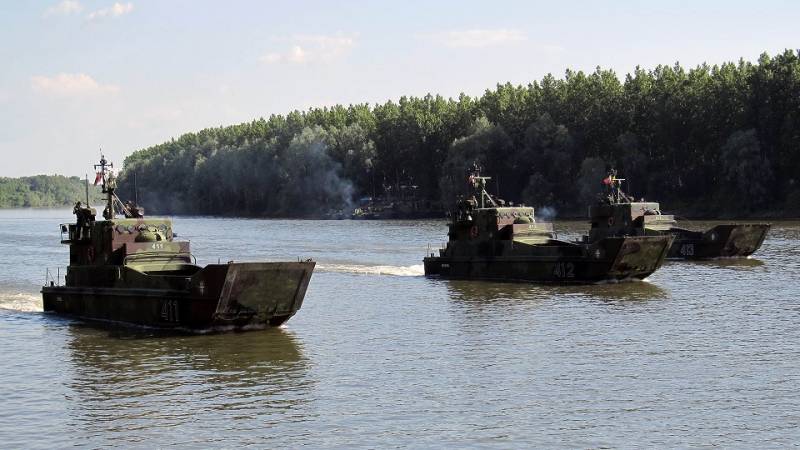 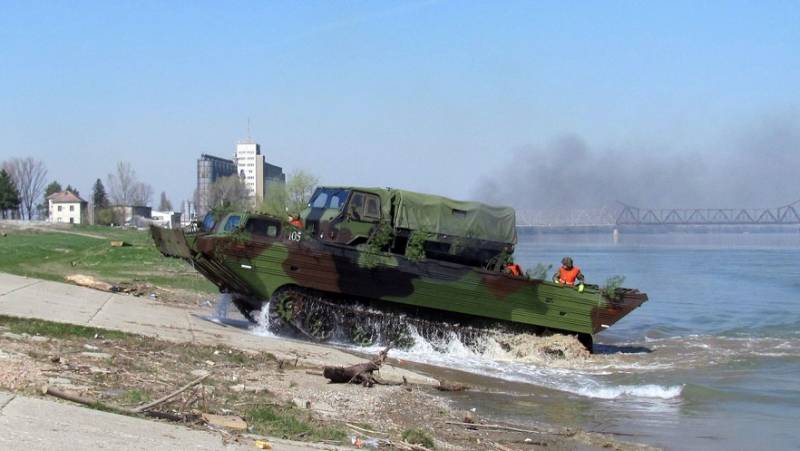 PTS-M River Flotilla
Apart are two pontoon battalions and a river demagnetization station, armed with 20-mm M71 guns and also patrolling river routes. The composition of the pontoon battalions includes the M-71 pontoon bridges on FAP 2026 trucks, as well as Soviet floating PTS-M transporters in the amount of 12 pieces.

At the end of March 2020, by the way, it was the pontoon battalions that conducted the exercises in connection with the aggravation of the situation and additional tension in connection with the coronavirus pandemic. The main task was to test the readiness to create and maintain points of transport across the country's river arteries. Tasks were worked out under conditions of a possible attack on the created points.

Ctrl Enter
Noticed a mistake Highlight text and press. Ctrl + Enter
We are
The cruisers of the 68 bis project: the Sverdlov missions in the post-war fleet of the USSR. 3 partCoastal Warships: Modern Approach
17 comments
Information
Dear reader, to leave comments on the publication, you must to register.