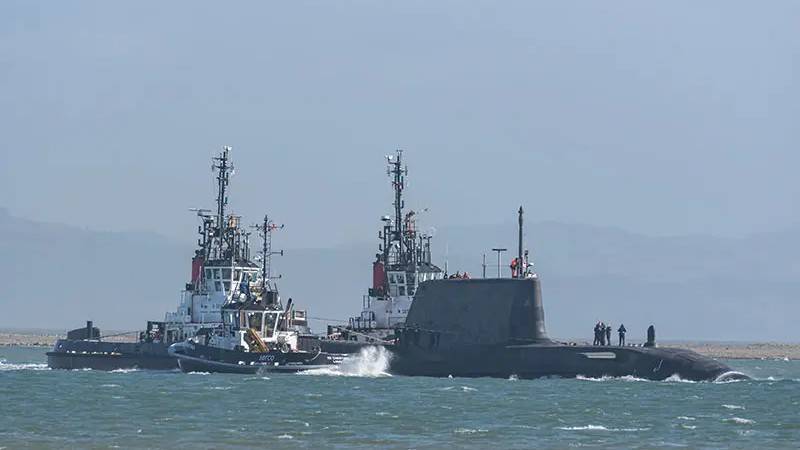 The fourth nuclear submarine, Audacious, of the Astute project, built in the interests of the British Navy, left the BAE Systems shipyard in Barrow-in-Furness and headed for the Clyde Naval Base. This is reported by British media.


This is the first entry into the sea of ​​the latest British submarine launched in May 2017. The submarine is the fourth in a series of seven submarines of the Astyut class intended for the Royal Navy of Britain. Laid in March 2009, the baptism ceremony took place on December 16, 2016. Broadcast the fleet expected in 2018.

In total, BAE Systems is to build 7 Astyut class nuclear submarines for the country's Navy. The lead submarine was handed over to the British Navy in November 2010. The second submarine of the series, Ambush, became part of the Navy on March 1, 2013. The third submarine of the series, "Artfal", was transferred to the British Navy on December 10, 2015 and became part of the fleet on March 18, 2016. Currently, at the different stages of completion there are three more nuclear submarines of this class.

In the British Navy, new submarines should replace the Trafalgar type submarines (three such nuclear submarines, put into operation from 1989 to 1991, remain in service).

Submarines of the Astyut class are designed both for operations in the fleet and in isolation from the main forces. Submarines can be used to carry out the tasks of combating enemy ships and submarines, attack ground targets, carry out the landing of groups of combat swimmers and gather intelligence information.

The displacement of the Astyut class submarine is 7400 tons, the hull length is 97 meters. Speed ​​under water - up to 29 knots. The working depth is 300 meters.

Rolls-Royce PWR-2 Nuclear Reactor Not Requiring Reboot. The service life is 25 years. Two turbines manufactured by Elstom (former General Electric) were installed. This power plant provides the rotation of one shaft and the operation of the jet propulsion. In addition, on board the submarines of this class there are two auxiliary diesel engines, as well as an emergency propulsion engine that rotates the retractable auxiliary propulsion.

We are in Yandex Zen
Fourth Esteut class submarine launched in Britain
The keel of the sixth Estiut class submarine was laid at the shipyard in Barrow-in-Furness
31 comment
Information
Dear reader, to leave comments on the publication, you must to register.