Coronavirus for the West turned out to be worse than Putin 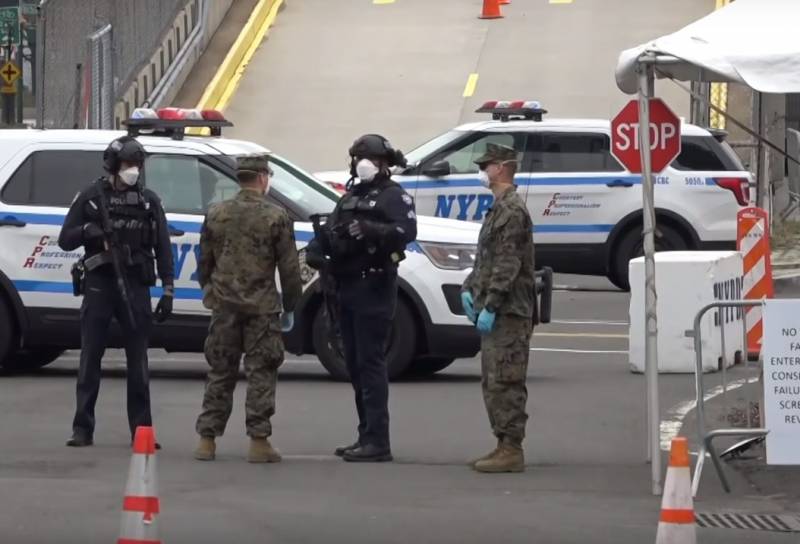 What the Middle East terrorists and the “Russian threat” did not achieve, came under the power of the COVID-19 virus. Americans and Europeans are afraid to go outside, and Western democracies have turned into police states in a matter of weeks.


The famous American publication The New York Times admits that the coronavirus has created a new form of terror, virtually paralyzing the economy and turning the entire ordinary life of a western inhabitant upside down. Western society was already rapidly atomizing, social relations between people became thinner and thinner, but the pandemic accelerated this process many times.

In the minds of impressionable Americans today is the fear of any stranger. He does not have to be an immigrant from the East, as during the anti-terrorist paranoia. Now the threat can be seen in the noble neighborly grandfather, in the saleswoman of the supermarket and even in the medical professional. After all, they can be infected, even if they do not get sick. Therefore, on the streets, people shy away from each other as they once shied away from visiting women, wrapped in their black robes.

Although Steve Erlanger, the author of The New York Times, is trying to convince the reader that terrorism is far worse than epidemics, the magnitude of the damage caused by the coronavirus to the global economy casts doubt on these words. However, this is the undoubted fault of governments: not only American, but almost all countries of the world. Such threats as international terrorism, political extremism, the danger of an attack by a hostile state have always been considered much more serious and significant than threats of a biological, natural nature.

States invested tremendously in equipping the armed forces, in intelligence and counterintelligence activities, created special forces units, and health care and virology expenses were somewhere near the end of the budget spending list. And so in any country - both in Russia and in the USA. But coronavirus quickly showed the fallacy of this approach: it turned out that a viral disease is able to "knock out" the economy harder than many wars, not to mention terrorist attacks or popular unrest.

In general, the nature of publications in the American press in recent weeks shows the whole difficult situation in which the United States finds itself. On the one hand, we see a fear of coronavirus, which makes the government accuse of insufficient measures, their lateness, and on the other, fear of economic and social collapse: quarantine is death for small businesses, it is massive unemployment and a catastrophic deterioration in the lives of ordinary people. But there is a positive component: fate itself has given American society a chance to understand that Russia and the Russians are not their main threat. Of course, Donald Trump is trying not to forget about foreign policy, but most Americans are no longer interested.

Steve Erlanger cites Peter Neumann, a professor of security at King's College London, who is convinced that after a pandemic, understanding of the security system in developed countries will change. The authorities will understand that such a direction as protection against biological threats is no less important than strengthening the army, anti-terrorist activities or counterintelligence. Most likely, special services will have their own virological departments, and redistribution in funding will occur.

However, we will be frank, and in Russia the situation is no better. Yes, there aren’t so many sick people, but the self-isolation regime will hurt both the country's economy and the budget of millions of ordinary citizens. It was difficult for the federal government to take any really effective measures to support citizens, and it was simply difficult for the federal authorities to take upon themselves the full responsibility. And this is understandable, since the country was not ready for such a development of events: for decades, the domestic health care system was destroyed, financing of medical facilities was carried out on a residual basis, basic medical personnel received meager salaries.

If we think about the future, the most important question that begs itself is whether the authorities will be able to draw some conclusions from current events and change their policies so that in the future the repetition of such scenarios would bring much less damage.

Ctrl Enter
Noticed a mistake Highlight text and press. Ctrl + Enter
We are
“Let's talk about science”: scientists have found out which metal coronavirus COVID-19 is “afraid” of surfacesRussia is taken to the Golden Billion
87 comments
Information
Dear reader, to leave comments on the publication, you must to register.