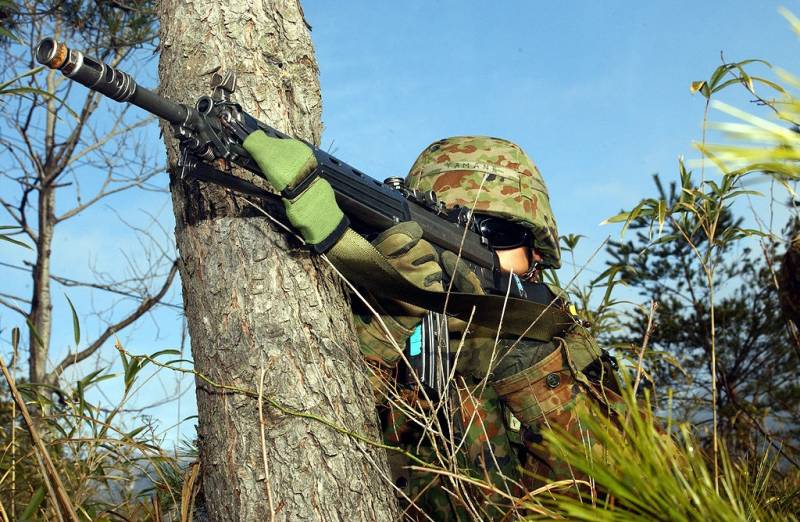 Rifle "Type 89" in an environment close to combat. But soon a replacement will come to her!

Even with a grain of courage, a person can become a warrior, with a drop of love, everyone can become a messiah ... No matter how tired you are, however lonely you are, do not forget, there are people who care about you ... ”
Usagi Tsukino / Sailor Moon

Weapon and firms. “Will there be any sequel to the Howa Type 89 rifle?” Here is a question that quite unexpectedly surfaced after the publication of the article “IN” "Howa Type 89. Its" alien "rifle".

Indeed, the rifle has been in service for quite some time, and if not physically, then morally certainly out of date. And if it’s out of date, then you need to replace it. And for what? But, fortunately, in one of the comments there was information that “About $ 9 has been allocated in the budget of this year for the purchase of 000 HOWA 000 rifles.” That's just a pity that there is practically no information about this rifle. It is only known that she won the contest against SCAR-L FN HERSTAL and HK3283. Well and the fact that this rifle is designed for the Japanese Self-Defense Forces by Howa and that it is the successor to the Howa Type 5.56 rifle. 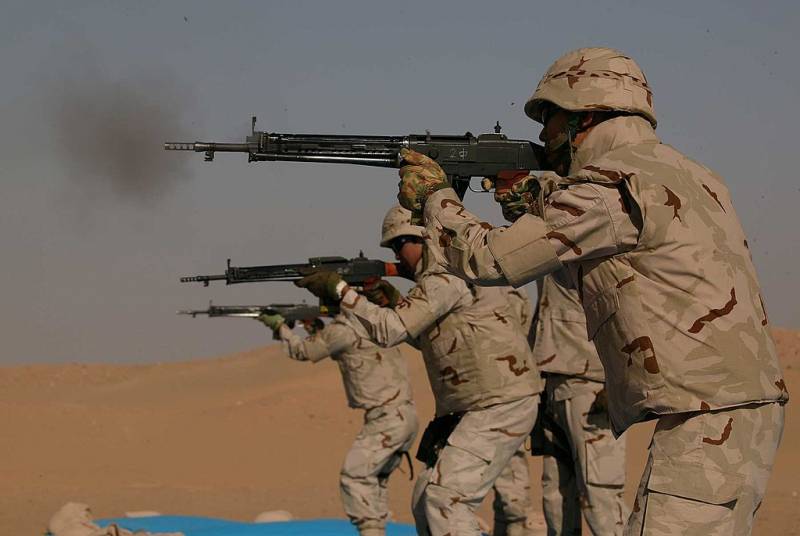 The Japanese contingent in Iraq also shot from "89"! 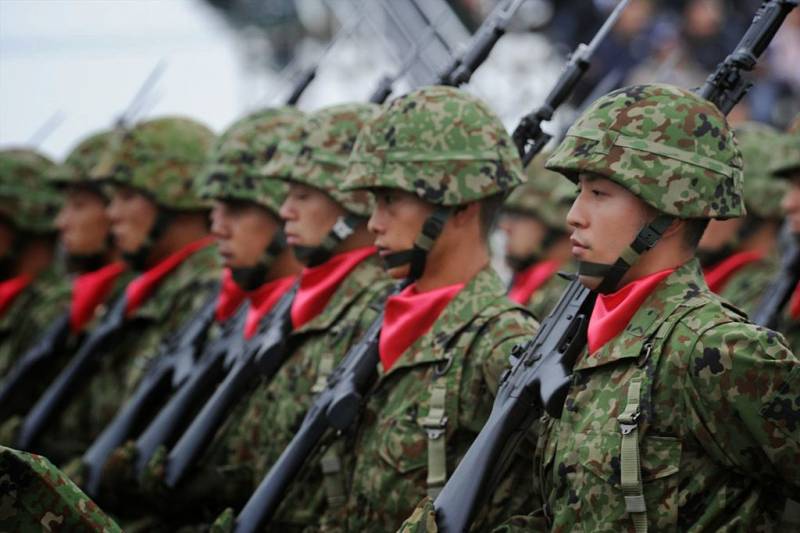 And the same rifles among the fighters of the Japanese Self-Defense Forces in the parade. But why such bright red neckerchiefs?
Nevertheless, information about this new and rather curious sample was still found. In particular, as it turned out, back in August 2014, it was reported that the JGSDF (Japanese Self-Defense Forces) were looking for a new rifle to replace the old Type 89. The initial candidates for replacement were the Heckler & Koch G36, Heckler & Koch HK416, Steyr AUG, FN SCAR rifles and a new rifle developed by Howa itself. 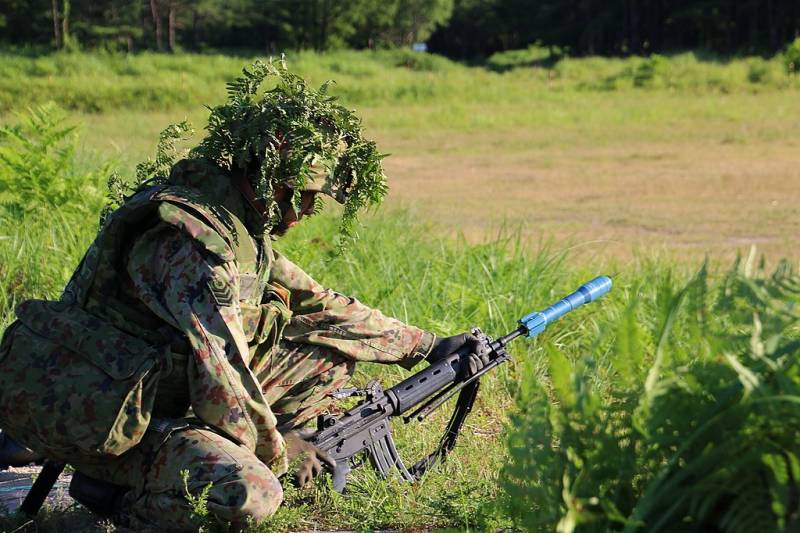 Japanese soldier fires with Type 06 grenades put on Type 89 rifle barrel
In 2015, the Japanese Ministry of Defense purchased various foreign-made rifles for testing and contracted Howa to test her rifles as a comparison. All test samples received alphabetical indexing. "Type S", 516 and 716 "are SIG516 and SIG716," type G, V "is G36V," type HK "is, of course, HK416 or HK417, and" type SC, H and L "are rifles SCAR-H and SCAR-L. 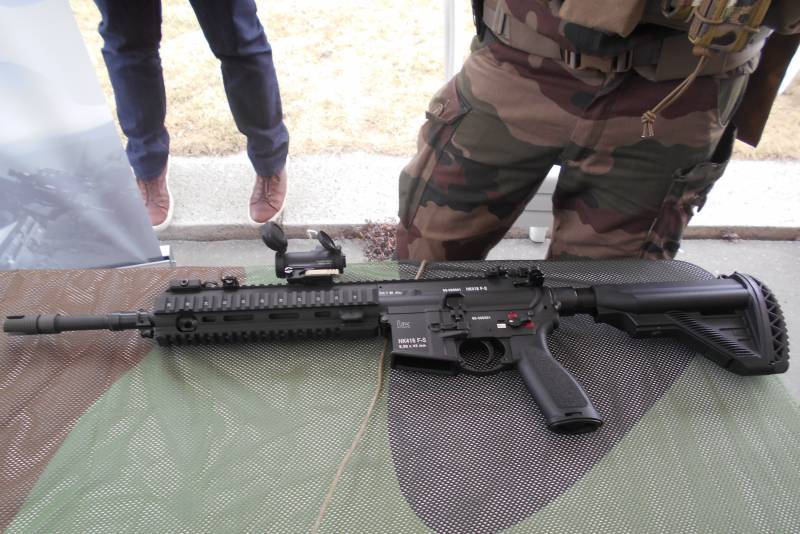 French Army HK416 Rifle
At the same time, Howa filed a patent application for the design of its rifle on May 15, 2015. In addition, its design was patented in accordance with the Japan Construction Law (Section 14), which allows the structure to be kept secret for up to three years. The characteristic design features of the rifle were also later patented in accordance with the same law on September 25, 2015. So, both the design of the units and even the appearance of the new model of the Howa rifle are today objects of strict patent law, and it will be valid for three years! So, all this time to get her photos will be very problematic, unless someone knows how to make them ... not quite, say, legally and put it at your own risk and peril on the Internet. 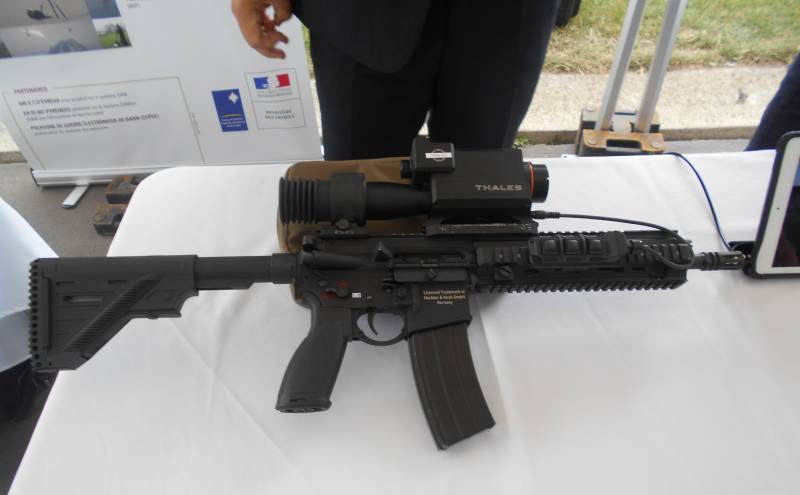 HK416a5 - "carbine"
The outcome of these tests was not reported. But it was reported that in 2018, the Ministry of Defense of Japan purchased another batch of small arms for further testing. Apparently, it was not possible to immediately find out something, additional tests were needed, including directly in the armed forces. 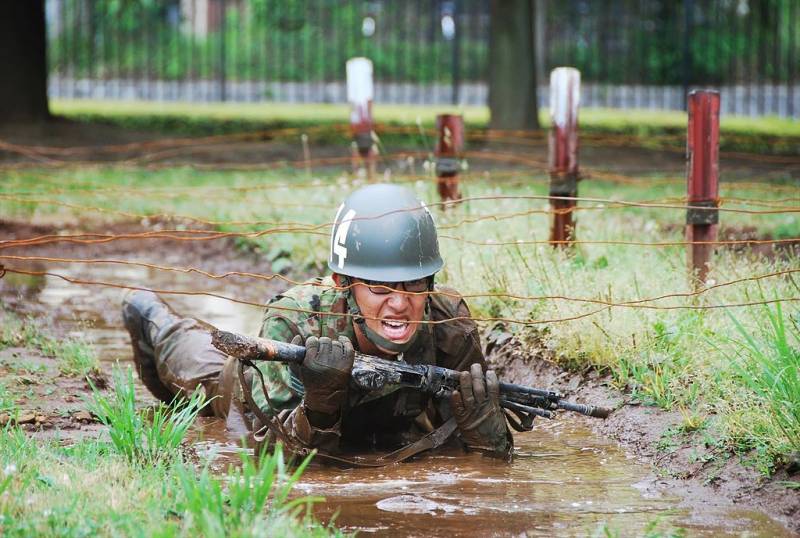 And this is how the fighters of the Japanese Self-Defense Forces test themselves and test their weapons! 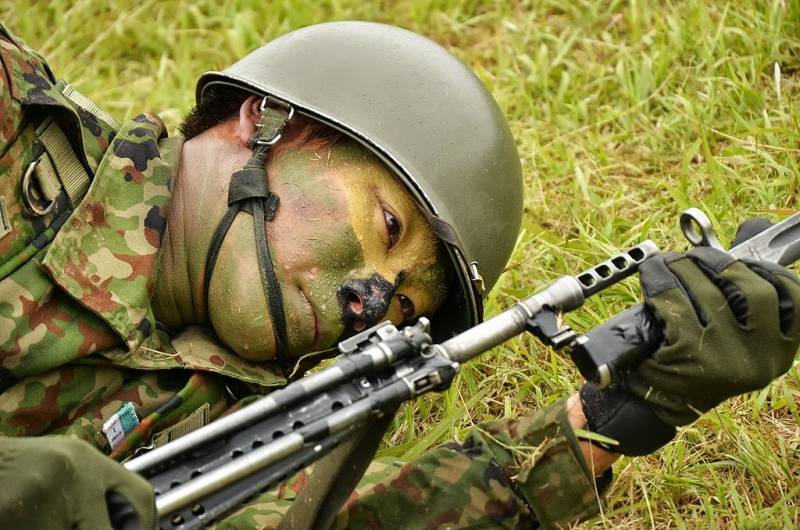 A bayonet command followed!
As a result, the military selected the HOWA 5.56, HK416 and SCAR-L rifles. And after that, on December 6, 2019, it was reported that HOWA 5.56 was chosen among the other two rifles as the new rifle for the Japanese Self-Defense Forces. A subsequent report indicated that in 2018, it was evaluated using two important sets of parameters. According to the first, the main attention was focused on revealing its characteristics of weapons on land, including such important indicators as effective range and accuracy. The second assessment compared the characteristics, logistics and cost of weapons with two other rifles. Since all three rifles met the requirements of the Self-Defense Forces, the main question was, as it happens with weapons very, very often, the question of money, that is, the cost of weapons in the scale of its mass production. And HOWA 5.56 was chosen precisely because it received the highest rating for this indicator. It was found that the unit price for mass production is 280 yen, including maintenance and operation costs. Well, the estimated life cycle cost in the event that 000 rifles are ordered is 150000 billion yen! Well, her creators are also their own. These are the engineers at Howa Kazuhiro Kuroda and Koji Iwata.

Japanese experts say that Howa 5.56 has better durability, firepower and manufacturability compared to type 89. Also, HOWA 5.56 has Picatinny rail compared to type 89. Moreover, this is the first Japanese rifle, which received them as a standard structural element. Stores are also considered compatible with M16 stores. And this makes sense, because Japanese soldiers, for example, have already participated with the Americans in a military mission in Iraq. The rifle is equipped with a dual selector for fire modes and seems to have automation based on a short piston stroke. 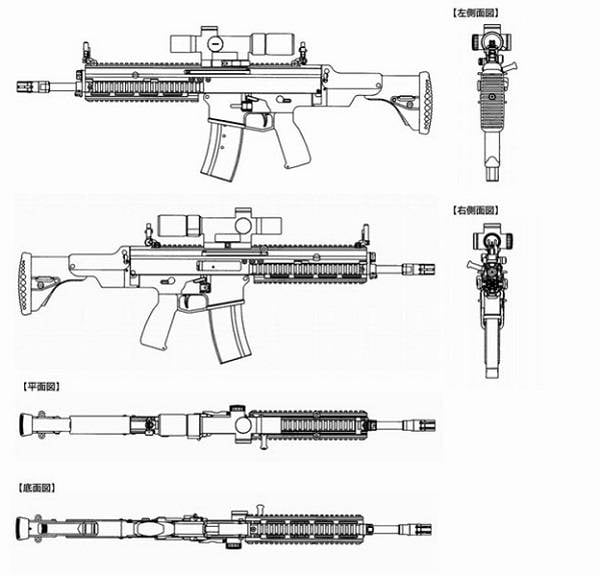 Here is a graphic diagram of the new Howa 5.56 rifle
The modern design of the HOWA 5.56 is practically no different from the design of other modern automatic rifles and has only a few noticeable changes. So, the barrel length was slightly reduced, and its protective casing was changed so as to extend the Picatinny rail as far forward as possible. In addition, there is more than one such bar on it. There are four of them: one on top, one on the bottom and two on the sides. Folding iron sights were also put on the rifle, and a shoulder pad was installed on the butt, similar to the one on the HK416. As for tactical characteristics, the new rifle refused to fire with a cut-off of three shots, considering such a regime irrational. So now she has only two fire modes: single shots and automatic fire. 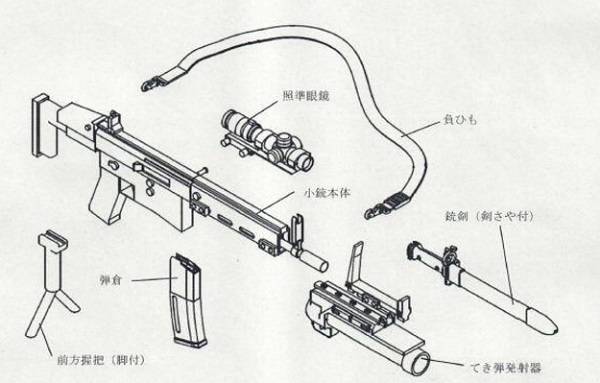 And this is a set of parts with which it is equipped, including a 40-mm grenade launcher and a bipod bipod
Since Japan has experience in acquiring and using a number of foreign rifles, it is believed that the design of the HOWA 5.56 was compared with the FN SCAR, CZ 805 BREN and Heckler & Koch HK433 rifles, with some experts suggesting that the rifle has the same dimensions and functionality as and a SCAR rifle. And, of course, we must not forget about manufacturability: here the experience gained by Howa in the development and production of the Type 89 is more than enough. 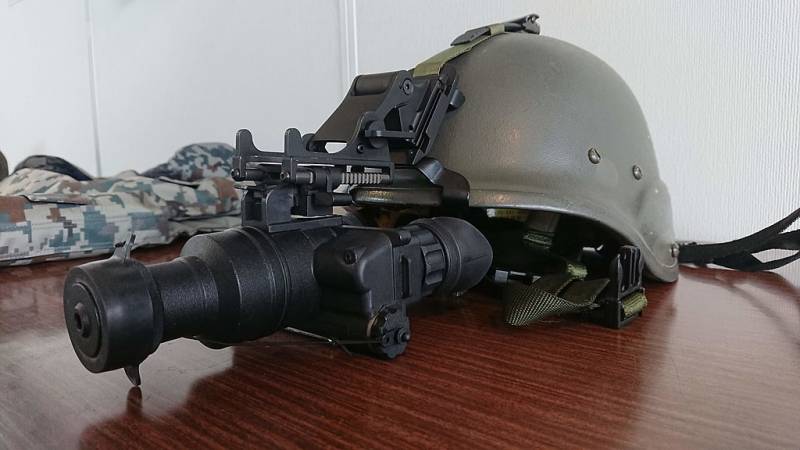 Helmet Vision Type 88 Night Vision
The new rifle will most likely be designated as “Type 19” or 20, although there is no confirmation of this, and besides, it can be considered an updated version of the old “Type 89” rifle.

Interestingly, a new pistol is being adopted simultaneously with the rifle. True, not your own, but SFP9 from H & K. And that, in turn, is a version of the SIG 220 developed in 1978. This sample was tested along with the Beretta APX and Glock 17 pistols, and the Japanese liked it better. 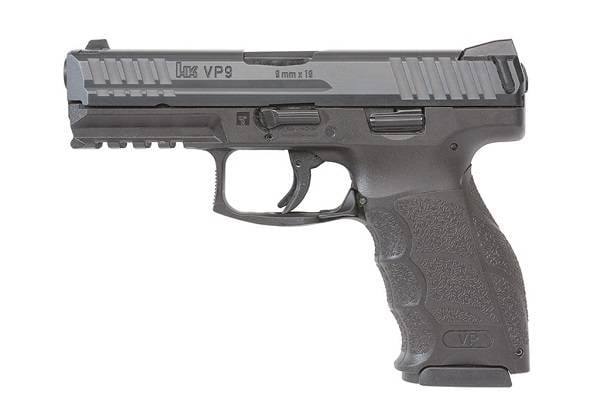 SFP9 Gun
The purchase of a new machine gun for the Self-Defense Forces is also looming on the horizon. The Sumitomo company announced that it is designing a new multi-caliber machine gun that will not be inferior to foreign models. 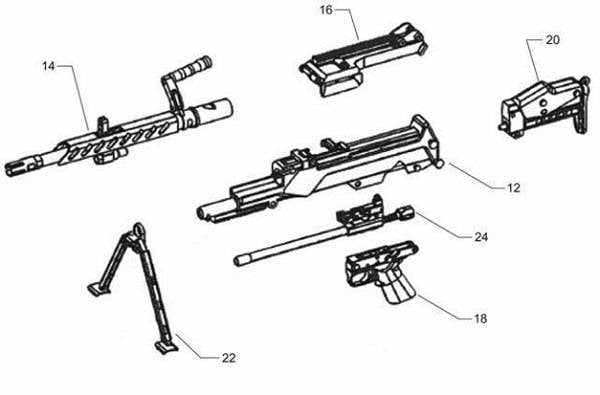 But these are the details that he will understand!
However, some Japanese experts are concerned about Sumitomo’s ability to produce decent weapons. Although this company has been producing machine guns of various designs for decades for the Self-Defense Forces for decades, the quality of their products has a poor reputation. 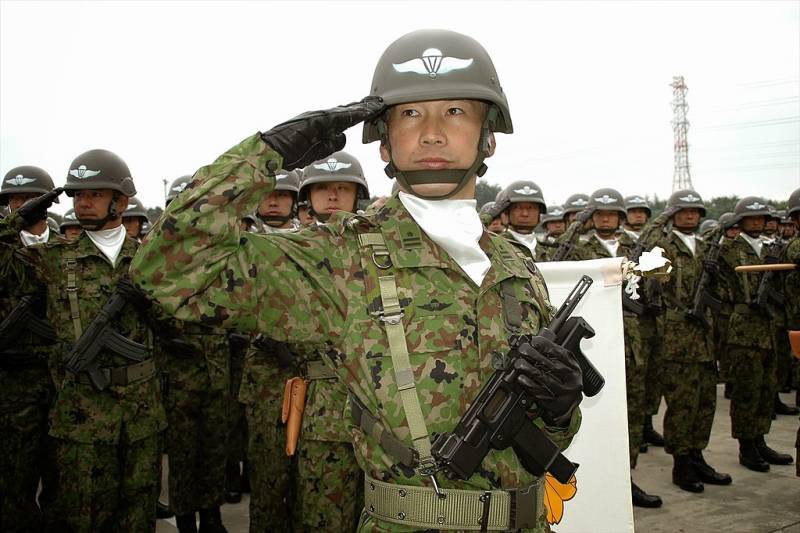 Well, the Japanese are not going to replace this 9-mm submachine gun based on the Israeli “mini-Uzi”. He already suits them! 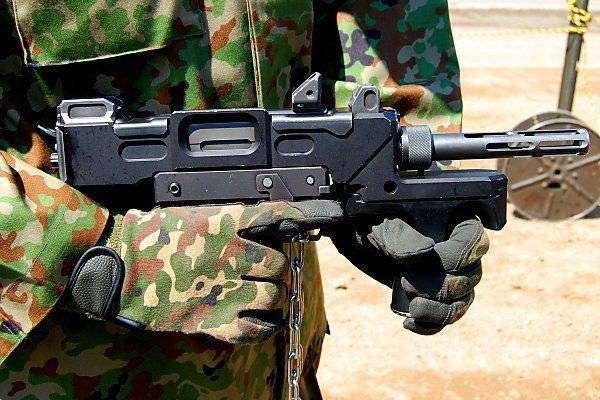 Here it is, side view
However, now they declare that their sample will be better than the German MG5 from H & K, here, they say, Sumitomo was able to achieve an unsurpassed result.

Wait and see! Only this can be said for now.

Ctrl Enter
Noticed a mistake Highlight text and press. Ctrl + Enter
We are
6X49 cartridge and SVK, SVK-S, TKB-0145K sniper riflesWhat should be a modern sniper (part of 1)
63 comments
Information
Dear reader, to leave comments on the publication, you must to register.