Unrealized projects of the USSR: from the Palace of Soviets and Taiga to Spiral 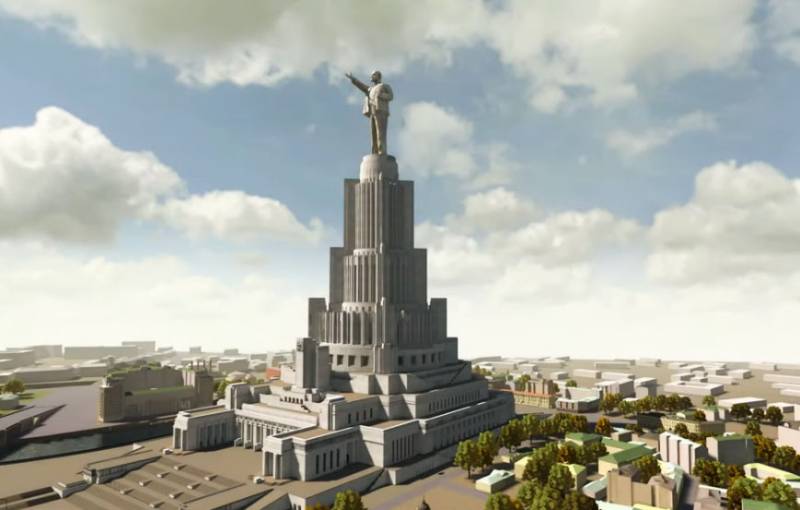 The Soviet Union was much on large-scale projects. Among them are water reservoirs that swallowed up previously settled territories, hydroelectric power stations that blocked the great rivers, giant coal openings, the size of a city, etc. Today, they are all taken for granted. People no longer think of other pictures of the world around them.

Projects that have not become reality

There were projects in the Soviet plans that, having aroused public opinion, were remembered as an example of ambitious projection or thoughtless initiative. These include, first of all, the project of transferring the flow of Siberian rivers to the republics of Central Asia.

The project initiators proposed to lay a large shipping channel from the Ob to Uzbekistan. He was supposed to provide water to Uzbek cotton growers and save the Aral Sea. In addition to this channel, it was proposed to reverse the Irtysh. Direct its water to the arid regions of Kazakhstan. A special hydroelectric facility, pumping stations, a canal and a huge reservoir had to provide this venture.

In 1985, the USSR Academy of Sciences declared the project insolvent due to its dangerous environmental consequences. All work has been discontinued. It was rumored that the decision of the academicians was affected by the unsuccessful implementation of the Taiga project, which was forgotten by the general public. He was to replenish the waters of the shallow Caspian. The Taiga project envisaged connecting the Pechora and Kolva rivers in the Perm Territory with a canal. For this, planned 250 nuclear explosions! The first three of them in 1971 carried radioactive fallout beyond the territory of the USSR.

An international scandal arose. The Soviet Union was accused of violating the Moscow treaty banning nuclear tests in three environments. The project was closed, leaving a radioactive lake in memory of him. As they say, not all projects are equally useful ...

Such unrealized projects during the years of Soviet power have accumulated several dozen. You can also recall the construction of the Palace of Soviets in Moscow. The monumental building, 415 meters high, crowned with a hundred-meter sculpture of Lenin, was intended to hold sessions of the Supreme Soviet of the USSR and other public events.

They decided to erect a palace on the site of the Cathedral of Christ the Savior. The temple in 1931 was blown up. Eight years were transported with the foundation. Then they took up the frame of the building. A lot of money was spent. But, as it turned out, in the end they flew into the tube like the labor of hundreds of people. Further work was hindered by the war. During the defense of Moscow, steel structures were dismantled and allowed to build bridges. Perhaps this is the only thing that can be considered a positive component of the project of the Palace of Soviets. Later, at that very place, the world's largest outdoor winter pool "Moscow" was opened. Now here is the temple again.

When there were not enough forces and means

There were projects in the Soviet asset that were hindered by the state’s lack of forces, means and technologies. The first in this row is the Crimean bridge. They thought about it even under the king. Under Stalin, they built, but failed. The bridge piers were smashed by the first ice drift. To realize this project an opportunity appeared only in the new century.

Having coped with this task, we remembered about Sakhalin Island. In the post-war years, they tried to connect it with the mainland by an underwater tunnel. Almost 30 thousand prisoners were attracted to work. After the death of Stalin, people were released from punishment, and the construction site was abandoned.

Crimean success persuaded the Russian government to build, instead of a tunnel, a bridge from the mainland to Sakhalin. From it they decided to make another transition through the Laperouse Strait to the Japanese island of Hokkaido. The bridge to Sakhalin and railway approaches to it were estimated at more than 500 billion rubles.

The high cost of the project dampened the enthusiasm of government officials. They did not refuse to build the bridge, but delegated its development to the Russian Railways company, which was already overloaded with projects at the BAM, in Siberia, and plans for high-speed highways.

As the deputy chief engineer of the Giprostroymost Institute project, Nikolai Mitrofanov, recently stated in the media, the bridge to Sakhalin will be primarily designed to solve geopolitical problems - to increase the connectedness of the territories. Its carrying capacity in the first stages of operation will be 9,2 million tons per year.

In other words, the developers took the path of reducing the cost of the project. Now they will build only one railway track. This, of course, will reduce plans - to drive goods to Japan. However, things have shifted. The Sakhalin Bridge is part of infrastructure projects that fall under the resources of the National Wealth Fund.

Another ambitious project of the Soviet era is being implemented - the transpolar highway. True, now she changed her name to the Northern latitudinal passage. The original Soviet project saw a railway from the shores of the Barents Sea to the coast of the Sea of ​​Okhotsk and Chukotka. Then we limited ourselves to the segment "Chum - Salekhard - Korotchaevo - Igarka", but they did not master it in full.

The revived Northern Latitudinal Railway project is luckier these days. It is included in the "Strategy for the development of railway transport in the Russian Federation until 2030." Last August, the MosOblTransProekt company almost completed geological and geodetic surveys at the objects of the course. Its individual sections are being built. According to already completed plans, the highway should be put into operation in 2023.

You can still give examples of useful projects for the country, which did not have enough Soviet strengths. Among them are those who are simply ahead of their time. The first in this series can be called the project of the colonization of Mars. In the romantic years of space exploration, scientists believed that by the end of the twentieth century, Soviet scientific bases would be built on this planet.

To this went. Projects of flights to the red planet appeared in 1959. Later, the Soviet apparatus Mars-3 was successfully planted on it. The first flight to Mars was scheduled for June 8, 1971. On July 10, 1974, the astronauts were supposed to return to Earth.

Then the plans were adjusted. They decided to combine the flight to Mars with an intermediate flight of Venus. For this task, they even proposed a project for a three-seater interplanetary ship with a rocket booster block. After the early death of the chief designer Sergey Pavlovich Korolyov, all projects were turned off. In the new century, the colonization of Mars became the “fix idea” of the world's space programs.

Today, at the start of the digital age, it is not out of place to recall the Sphinx project, an integrated communication system. It made it possible to control all home radio electronics not only from the remote control, but also by voice, communicate with network subscribers, including in the form of online conferences.

The system was composed of a processor with three memory units and a screen, a headphone, a liquid crystal or gas plasma screen, a hand-held remote with a removable display and a large remote with a telephone handset, spherical and acoustic speakers.

According to some expert estimates, the project did not reach consumers because of its high cost, but basically the Sphinx’s failure is associated with the collapse of the Union, which has collapsed many promising initiatives.

A number of projects ahead of their time are military developments. Among them are those that are implemented and even today are in service. (For example, a supersonic strategic bomber bomber with a variable sweep wing Tu-160 or a supersonic all-weather long-range fighter-interceptor MiG-31).

Others were less fortunate. In particular, the Spiral aerospace system. It was composed of an orbital plane, which was launched into space from an air launch by an accelerator aircraft. Then the rocket stage delivered the spaceship into orbit.

At the end of the 1970s, seven successful Spiral test flights were carried out, but the system never got to launch. The project was quietly covered up, giving preference to a new promising development of Energy-Buran, which, alas, did not survive the country that created it.

You can grieve over these and other military projects that are ahead of their time and not implemented. Soothing one thing: the work of Soviet designers was not forgotten. In one way or another, he embodied in modern weapons systems.

Looking back, we can state that all three types of unrealized Soviet projects (project-based, unsecured by technologies and necessary means, and ahead of time) remain in our storiesas attempts to make the country modern, advanced and exemplary for the world. All this to some extent justifies even the most bitter failures of past years and generations.

We are in Yandex Zen
Standing on the Nile. The battle for water begins in Africa
Why Uzbeks and Tajiks do not take the world
97 comments
Information
Dear reader, to leave comments on the publication, you must to register.