Tomos of schism: the situation with Orthodoxy in Ukraine more than a year after the decision of Constantinople 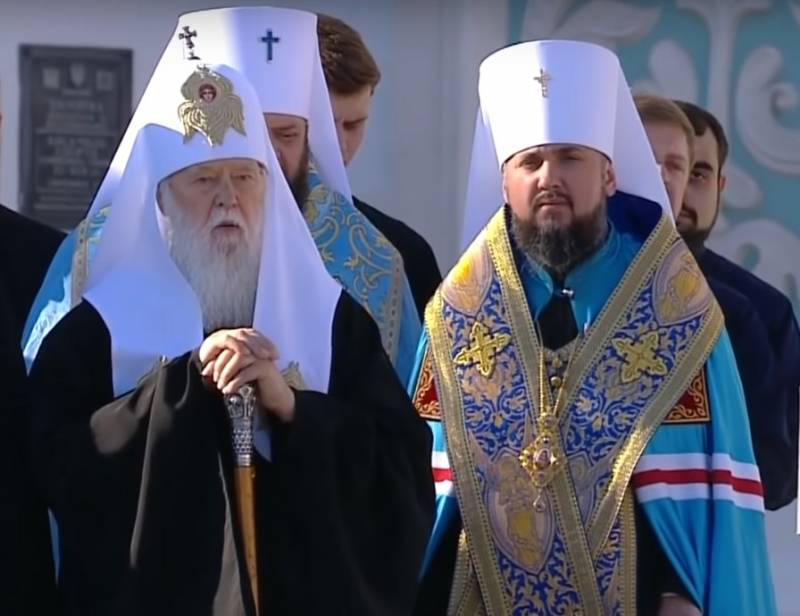 A little more than a year ago, in January 2019, the so-called Tomos of the Patriarch of Constantinople about autocephaly of the Orthodox Church of Ukraine (PCU) was published. This decision led to a split in Ukrainian Orthodoxy and created a very unfavorable situation for believing Ukrainians who were forced to move from church to church with parishes. What is the situation in this regard today?


The decision to grant autocephaly to the Orthodox Church of Ukraine was made by Patriarch Bartholomew on January 6, 2019, but it has been brewing for a long time. You do not have to be seven spans in your forehead to understand - this decision was not due to religious, but political considerations and was taken solely to weaken Russia's influence on Ukraine and the Ukrainian population.

The need of the Kiev regime as clearly as possible to demonstrate its separation from Russia in all aspects, its independence and distinctness from Russia and the Russian world, was expressed, inter alia, in the struggle for autocephaly of the Ukrainian church. It is no accident that the main initiator of autocephaly was Petro Poroshenko, who, despite the separation of the church from the state, actively intervened in religious matters.

As for the Patriarchate of Constantinople, he always had a difficult relationship with Moscow and the autocephaly of the PTsU in Fanar was seen as a great opportunity to tear out from the custody of Moscow a vast territory with tens of millions of inhabitants, although not all of them were a potential flock of new autocephalous at that time churches.

However, the Tomos given by Patriarch Bartholomew, following separation from Moscow, led to other consequences - to a conflict inside the Ukrainian church between two very significant hierarchs - Metropolitan Filaret (Mikhail Denisenko) and Metropolitan Epiphanius (Sergey Dumenko).

Initially, Filaret received the title of “Honorary Patriarch”, but he insisted on maintaining the structure of the Kiev Patriarchate and hoped to remain the head of the Orthodox Church of Ukraine in the status of the Patriarch of Kiev and All Russia-Ukraine. But Metropolitan Epiphanius, having secured the support of a significant part of the hierarchs of the PCU, the Kiev regime and the Patriarchate of Constantinople proper, saw himself as the head of the PCU.

Filaret Tomos did not recognize autocephaly, citing the fact that Ukrainian Orthodoxy moved from one dependence to another - it was dependent on Moscow, and became dependent on Constantinople. The PCU actually found itself in the status of the Metropolitanate of the Patriarchate of Constantinople, completely dependent in religious and financial matters on Fanar.

In turn, the PCU actually accused Filaret of splitting, but they did not forget about ostentatious mercy: generously left the elderly hierarch the right to live in a residence, to which Filaret reacted sarcastically, in the spirit of "thank you for not expelling me to the street."

Naturally, the support from the authorities became the main reason for the transition of many parishioners to the colony and the transfer of colony to many parishes, even the UOC of the Moscow Patriarchate. The transition from the Moscow Patriarchate to the new church was most actively observed in the west of Ukraine, where anti-Russian sentiments were always widespread. For comparison: by the spring of 2019, 116 parishes in the Volyn region and only 1 parish in the Zaporozhye region (3 parishes in the Dnipropetrovsk region, 4 in the Nikolaev region) reported leaving the UOC-MP.

Another curious circumstance testifies that the church schism in Ukraine is political in nature. As soon as the new president Vladimir Zelensky came to power in Kiev, positioning himself as equidistant from all churches in the religious matter, the reverse process began - several parishes returned from the PCU to the UOC MP. If we analyze the number of parishes, now the UOC-MP is leading in it (about 13 thousand parishes), then there is the PCU (8 thousand parishes) and by a huge margin - the UOC-KP Filaret (only about 20 parishes).

Now, the state authorities have been involved in the division of parishes and church property. Police officers do not shy away from using special means against parishioners of the UOC-KP Filaret, and Filaret, in turn, does not hesitate to accuse his opponent Epiphanius of anything, to the extent that the latter is the illegitimate son of the late Metropolitan Daniil (Chokalyuk).

The split of Ukrainian Orthodoxy became one of the saddest events for the Russian Orthodox Church. The political interests of the Kiev regime and the ambitions of individual hierarchs led to the fact that in Ukraine there were not just several churches, but real disassembly began for property, for parishes and parishioners, to which political organizations and power structures joined. For believers themselves, this situation is reflected very negatively: people move from church to church after the parishes and do not understand which parishioners they will be tomorrow. The misunderstanding was especially pronounced in the past few weeks, when parishioners want to pray for an early resolution of the pandemic, but the whole problem for them is that in the schismatic churches of Ukraine they also need to confirm their "commitment" to them and to no one else. That is, politics even penetrated into the spiritual life of Ukraine.

We are in Yandex Zen
The first storming of Orthodoxy failed. Kiev and Fanar started the correct siege
Genocide of Christians in the Middle East. Millions of people have become a bargaining chip for American geopolitics
52 comments
Information
Dear reader, to leave comments on the publication, you must to register.