The development of power: MAZ-535 is gaining strength 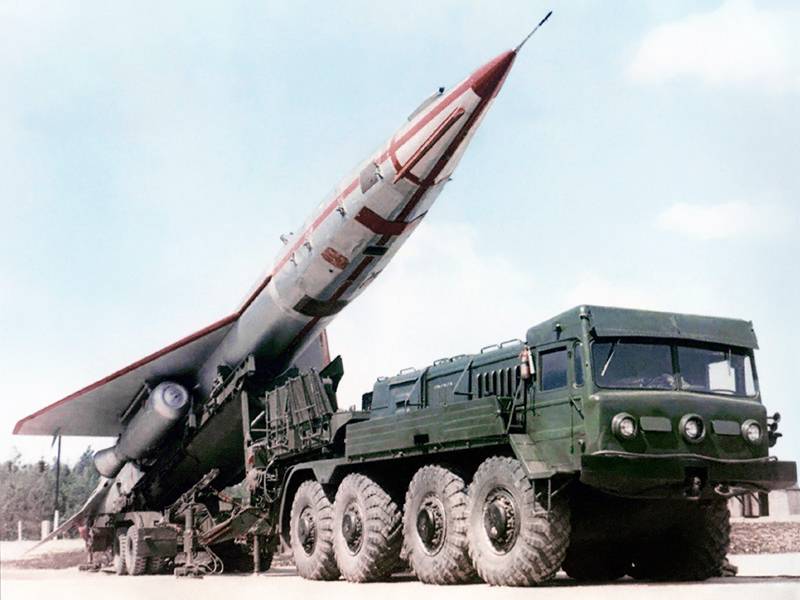 The first portion the material was about Minsk SKB-1, which was engaged in the development of heavy equipment in the interests of the USSR Ministry of Defense. It was here that our protagonist was developed stories - MAZ-535. However, the first-born of the design bureau was not a four-axle ballast tractor at all, but the MAZ-528 (4x4) machine, designed to tow trailers and work with dozer dumps. The tractor appeared in 1955, very much like a large tractor and was equipped with a YAZ-206 diesel engine with a capacity of 206 liters. with. Later, this prototype evolved into an average engineering wheeled tractor IKT-S, or MAZ-538, with an engine already in 375 liters. with. In 1963, due to the fact that Minsk residents could not cope with the growing demands of the military, the machine was moved to Kurgan, to the D.M. Karbyshev wheeled tractor plant (KZKT). Until this time, the company specialized in agricultural machinery and spare parts for tractor engines.

Source: trucksplanet.com
In 1965, the MAZ-535 with all the modifications left Minsk forever. From that moment on, in the heavy military automotive industry, KZKT was responsible for the production tank and ballast tractors, and MAZ was left with more prestigious equipment for the missile forces - already in the early 60s, SKB-1 was in full swing on the two-cab MAZ-534. And KZKT actually finished producing variations on the theme of the 535th car only in the early 90s.

In 1960, MAZ got rid of the production of 25-ton dump trucks - they moved the production to the Zhodino Machine-Building Plant, which later became the Belarusian Automobile Plant, the birthplace of the world-famous BelAZ trucks. I will allow myself a slight departure from the main topic and I will mention that in Soviet times, export versions of equipment were often simply renamed to BelAZ, the image of cars from Zhodino was so high abroad. In particular, KrAZ trucks intended for Europe were rebranded. 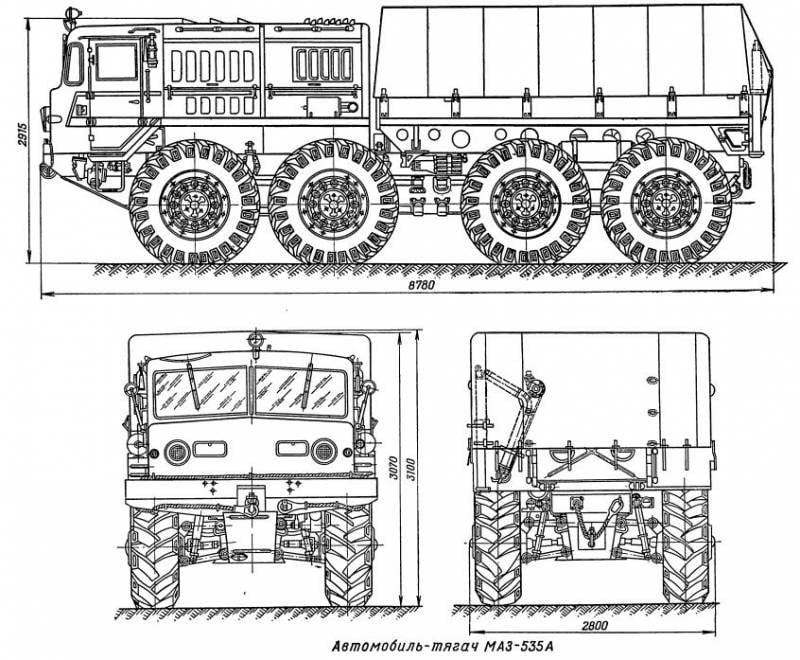 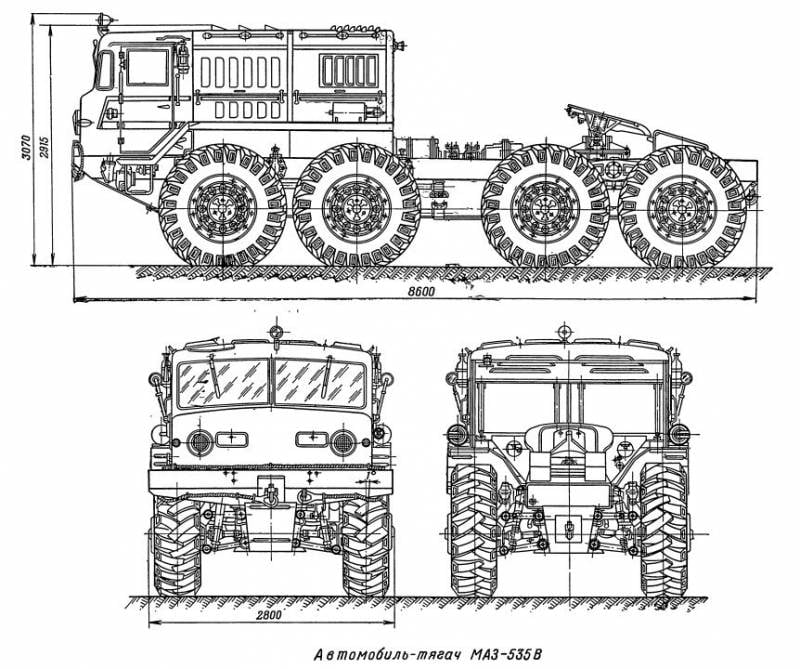 Source: Atlas of drawings MAZ-535 and its modifications 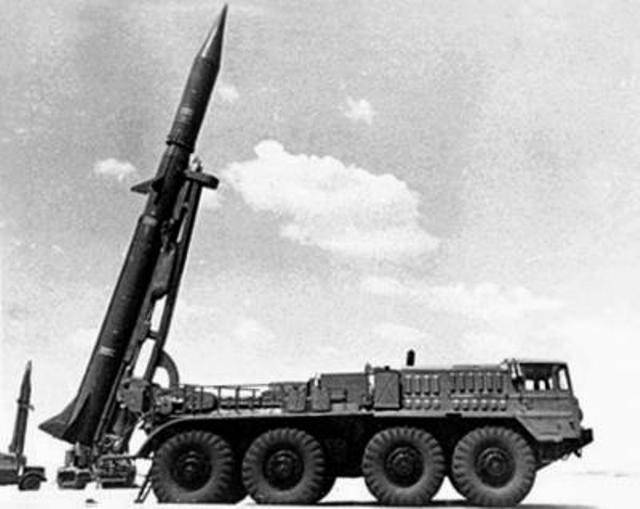 Trial MAZ-535B chassis with a launcher for the 2K10 Ladoga missile system. 1960 year. Source: trucksplanet.com
The MAZ-529B uniaxial tractors, together with the design headquarters, were transferred from Minsk in 1960 to the Mogilev Plant of Handling and Transport Equipment, which we remember as MoAZ. Now it is the Mogilev Automobile Plant named after S. M. Kirov, a branch of BelAZ. All this suggests that it is difficult to overestimate the importance of engineers and designers of the Minsk Automobile Plant for the technical development of transport throughout the Soviet Union. And yet the topic evokes sad thoughts: in Belarus all the enterprises mentioned were able to save, and the domestic KZKT no longer exists.

Back to the eight-wheel MAZ. The first-born were models 535, dating from 1956, and 535A with a reinforced frame, which was produced from 1957 to 1969. The 535V truck tractor was distinguished from artillery ballast tractors by the balancing suspension of the rear pair of axles without elastic elements, the absence of a winch and tire inflation system, which were additionally reinforced for large loads. On the towed MAZ-535In a biaxial semi-trailer, a launch pad was placed to launch the Tu-213 reconnaissance aircraft of the Yastreb complex. The launch was carried out from the STA-30 launcher. The engine compartment and the cabin for the first time received a partial reservation, which protects the scout from the hot gases. In 1960, experiments were conducted on the installation on 535B of an experimental launcher D-110K tactical complex "Onega" with a 3M1 missile weighing up to 3 tons. In 1961, the truck was already carrying the Ladoga tactical complex with a 3M2 missile, the mass of which exceeded 3 tons, on its back. The first launches from the wheeled chassis were unsuccessful, and in exchange for the complex they adopted the famous 2P16 Luna installation on the PT-76 crawler chassis. Naturally, the resource of the tracked vehicles was relatively small, over long distances the complex had to be loaded onto MAZ-535B wheeled semi-trailers. The main semitrailer of the truck tractor was then a 25-ton MAZ-5248 with four single-wheel wheels. 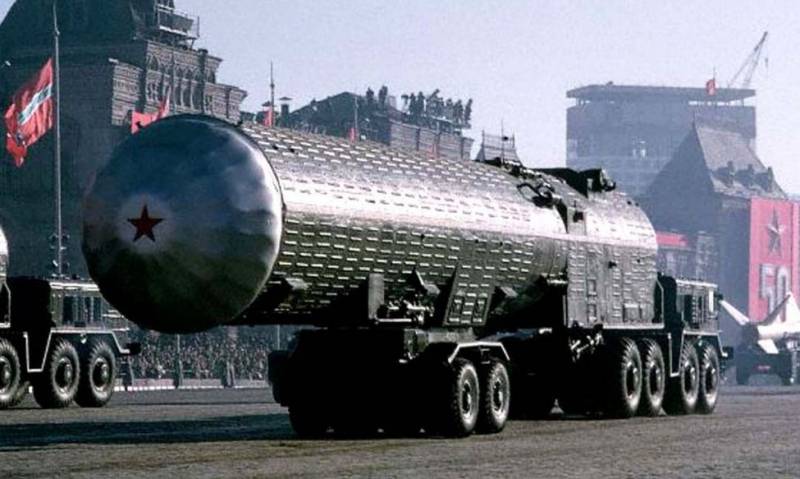 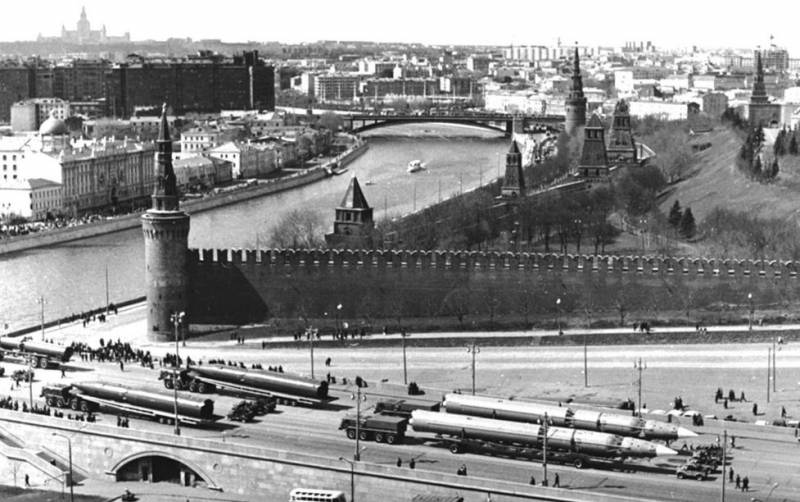 Missile road trains on the Moskvoretsky bridge after the parade - MAZ-537A tractors with GR-1 missiles (right) and MAZ-537 with R-26 missiles. 1965 year. Source: drive2.ru
But the appetites of the Ministry of Defense grew, as did the masses of goods transported. That is why the most common model appeared in the first wave of Mazovian heavy vehicles - MAZ-537. This machine was mainly intended for the transportation of tanks and other armored vehicles and has been in this role ever since. The power of the Barnaul motor was increased to 525 liters. with. that this has seriously improved the traction capabilities of the machine. Now a four-axle tractor could transport 5247 tons on a low-bed semi-trailer ChMZAP-50, as well as up to 75 tons as part of road trains with strategic weapons. It was MAZ-537 that scared the foreign attaches of the R-9A intercontinental ballistic missile in parades. The MAZ-535A ballast tractor carried out a similar trick with the R-36 missile. Now the 537th in the army performs not only the classic role of a tanker, but also serves in the Strategic Missile Forces - it carries amyl and heptyl rocket fuel components. For this purpose, two filling tanks ZATs-1 and ZATs-2 are mounted on the semitrailer. Among the few modifications of the 537th car there was a variant with the letter G equipped with a 15-ton winch located behind the engine compartment. Also in Minsk, they developed the MAZ-537D with an alternating current generating station and version 537E also with a generator that fed the hub electric motors of an active semi-trailer with a total weight of up to 65 tons. One of the few options for using the E-series machines was the unified transport and handling unit of the transport and launch container for the Strategic Missile Forces. This 41-meter giant consists of a tractor and an active triaxial semi-trailer with all steered wheels. The main objective of this machine is transportation and crane-free reloading of the launch container. There is a version of a similar purpose with a five-axle fully-controlled semi-trailer - the curb weight of such a road train exceeds 125 tons. Even the giant carriers with a 48x48 wheel arrangement have been developed and assembled! 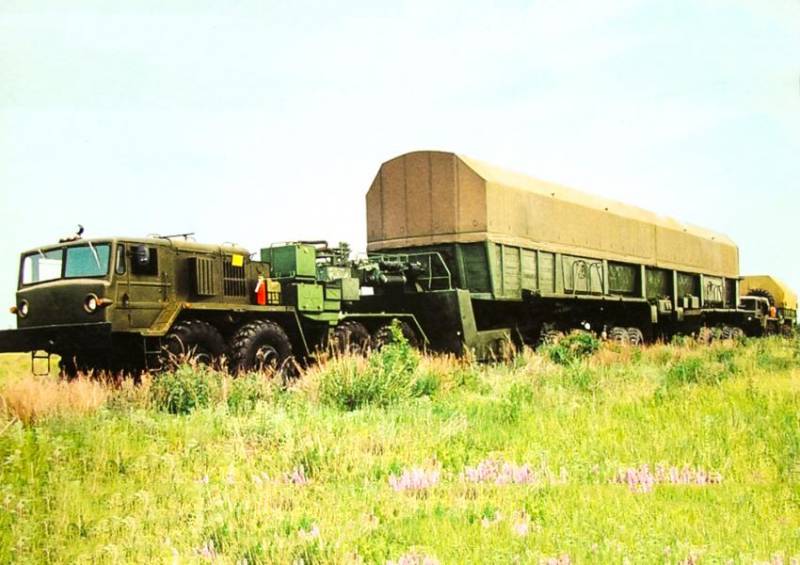 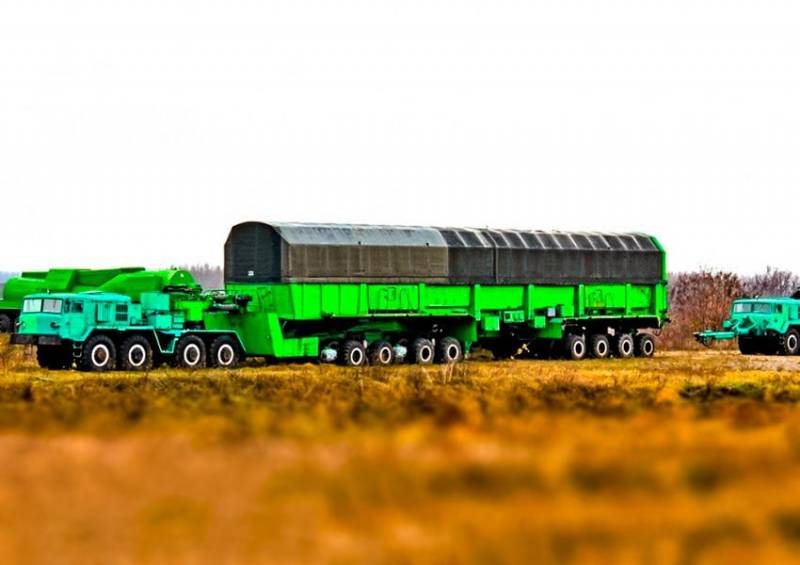 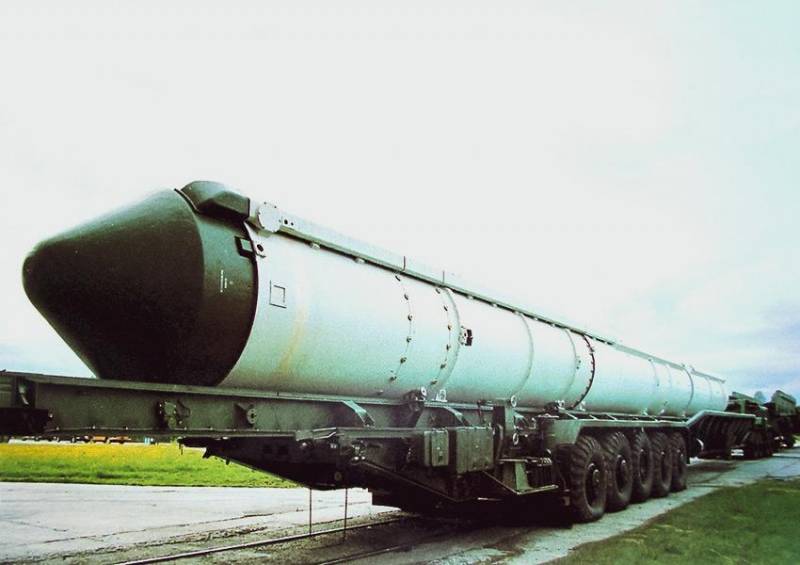 The upgraded transport unit 15T145MD for heavy missiles with a total mass of 125 tons. Source: autorambler.ru 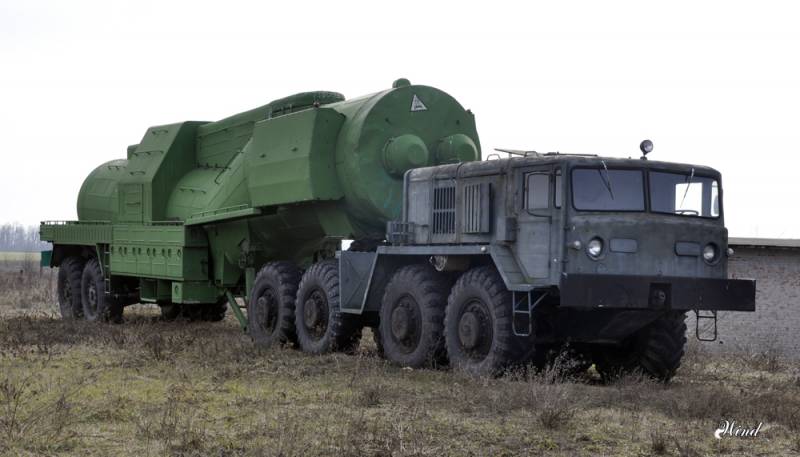 A machine for transporting rocket fuel components. Source: fototruck.ru
The production range also included the onboard MAZ-537A, which can still be found at military airfields of the former Soviet Union. Up to 15 tons of cargo could be placed in the back of this tractor. If we compare the 535A and 537A, the latter will be longer (increased from 8780 mm to 9130 mm), wider (from 2805 mm to 2885 mm), lower (from 2915 mm to 2880 mm) and with a larger base from 5750 mm, milking 6050 mm . In general, during the modernization, the Belarusian giant has grown a little in almost all directions. And the appetite of the 537 version grew to 125 l / 100 km, which forced designers to increase the capacity of fuel tanks to 840 liters. The latest version was MAZ-537K, on ​​which the crane was mounted. 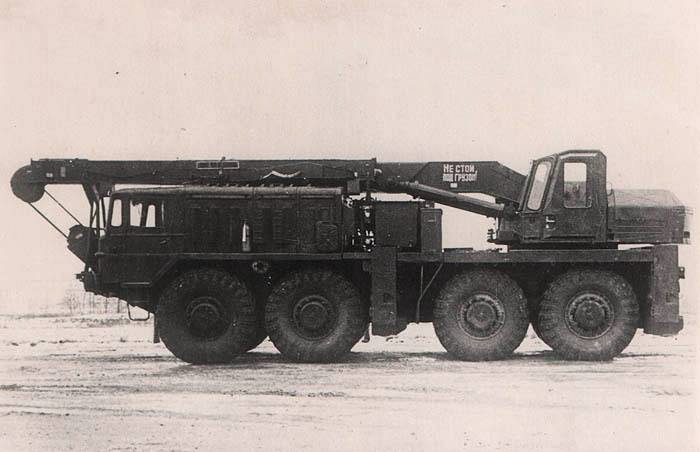 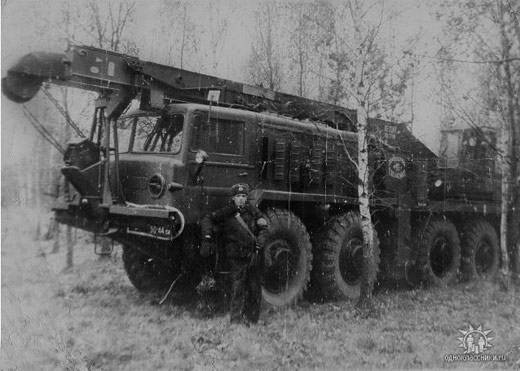 MAZ-537K. Source: trucksplanet.com
In 1962, the Ministry of Defense insisted on a kind of revocable campaign, when all the MAZ-535A and MAZ-537 issued by that time were modernized. Among other things, the frame was reinforced, the engine heating system was refitted, the stamped exhaust manifolds of the engines were replaced by cooled cast ones, additional oil filters were installed in the hydromechanical transmission, and they were also replaced with more advanced bearings in the torque converter. In addition, the cardan shafts from the transfer case to the axles were replaced and the fastening of the rear intermediate shaft flange to the same box was changed.

There was a short chapter in the history of MAZ-537 with the installation of missile systems for various purposes, and this took place in comparison with the latest at that time MAZ-543. In 1962-1963, the 537G tractor became the carrier of a semi-trailer with the installation of an R-16 intercontinental ballistic missile, whose weight was close to 147 tons. The entire load was borne by a 8T139 biaxial transport trolley, and the task of the tractor was to deliver the rocket to the launch pad. They tried to install the Temp operational-tactical complex (later Temp-S) with a nuclear warhead on the MAZ-537 and even conducted comparative tests in 1963. Compared with the long and better adapted to transport missiles MAZ-543, which in the end won. 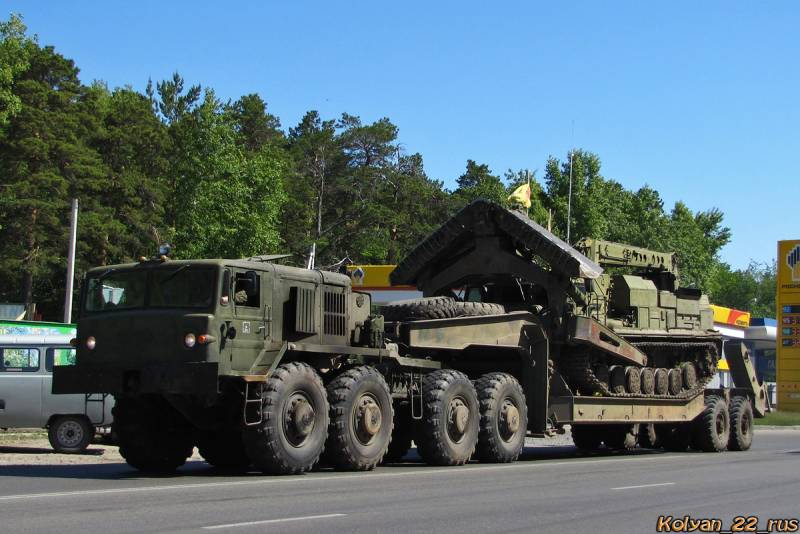 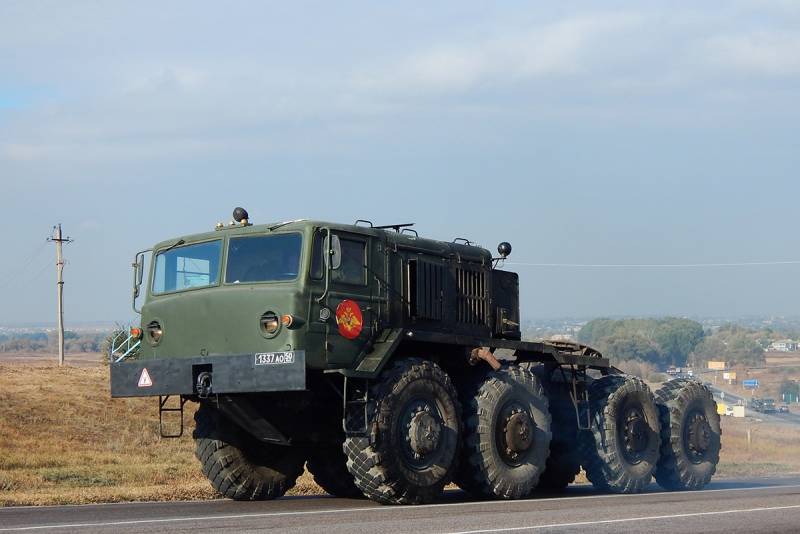 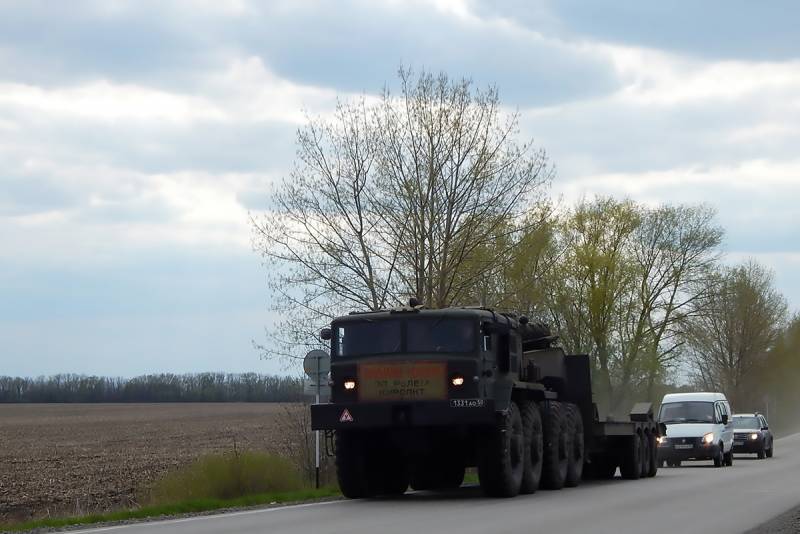 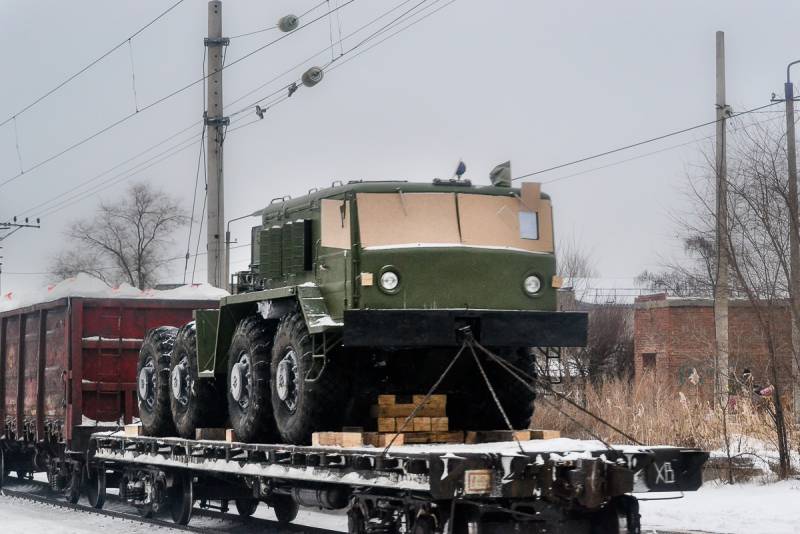 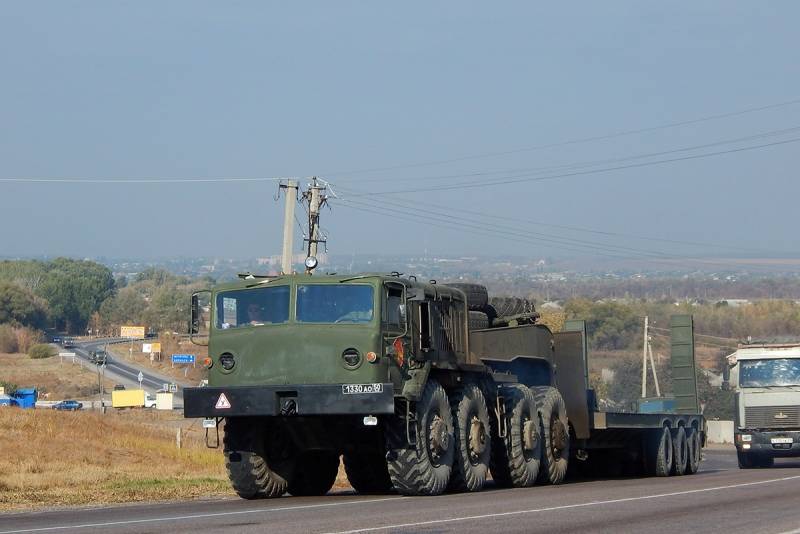 MAZy / KZKT modern Russian army. Source: fototruck.ru
From the late 50s and early 60s, the Minsk Automobile Plant gradually increased the production of technically sophisticated vehicles, which, with their extraordinary capabilities, gained respect among the troops and received the sonorous name “Hurricane”. Now cars of different generations and from different manufacturers can be found not only on the roads and on the roads of the post-Soviet space, but also in Europe - in particular, cars are very fond of in Germany and they continue military service in Finland.

The twists and turns of the production of the first eight-wheeled MAZs in mass production and the subsequent transfer to Kurgan will be dedicated to the end of the cycle.