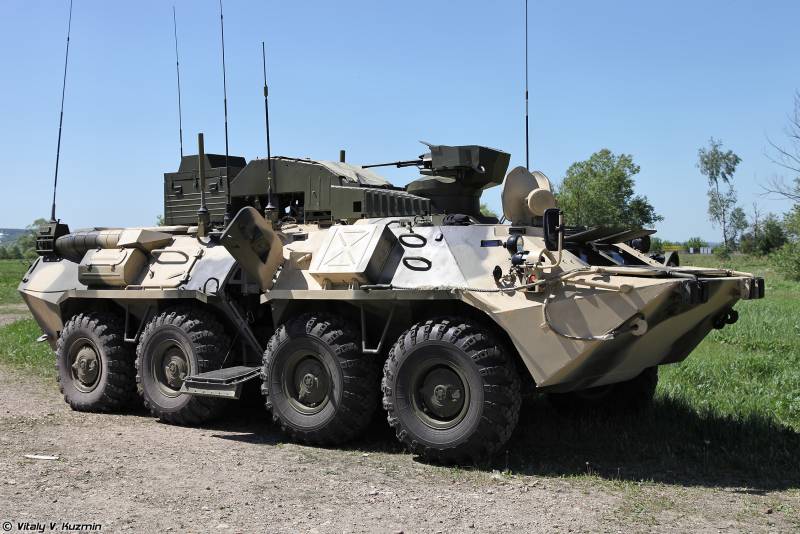 To ensure combat duty of mobile soil missile systems in the Russian Strategic Missile Forces, a wide range of different equipment is used. One of the samples of this kind is the combat anti-sabotage vehicle (BPDM) 15TS56M Typhoon-M, designed to escort and protect PGRK on patrol routes. Reportedly, more than 30 units of such equipment and dozens of simulators for crew training have already been delivered.

BPDM 15TS56M Typhoon-M was developed by order of the Strategic Missile Forces in the framework of cooperation between Strela and the Military-Industrial Company. Development work started in 2007 and ended in 2012. Soon, mass production began at a slow pace, and the first samples were handed over to the customer.

In August 2013, the Ministry of Defense announced the start of service of the first production Typhoon-M. The car was handed over to the Serpukhov branch of the Academy of the Strategic Missile Forces named after Peter the Great. The Academy has begun training crews for future BDMs. Then it was reported that by the end of the year one of the formations of the missile forces would receive new equipment.

Fulfillment of this order started on time and ended in 2014. The 54th Guards Missile Division (Ivanovo Region) became the first combatant operator of the Typhoon-M, which are armed with Topol-M and Yars missile systems. 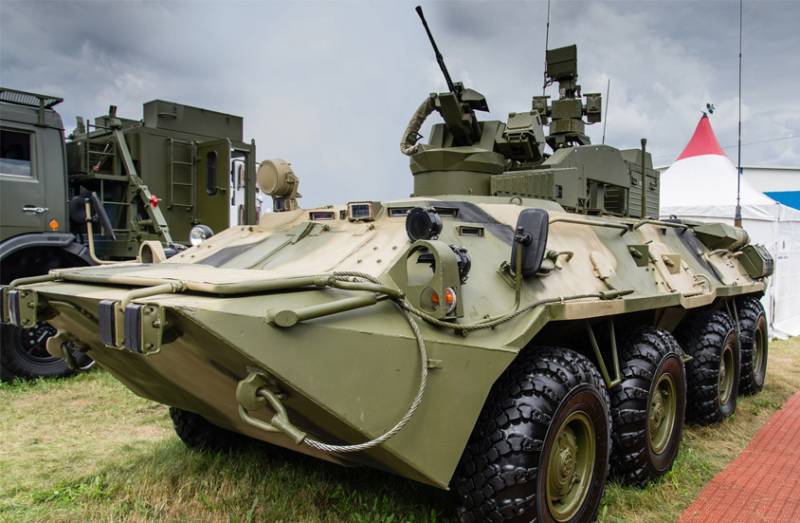 BPDM 15TS56M at the exhibition. Photo Central Research Institute "Petrel" / burevestnik.com
According to the plans of that time, the BPDM 15TS56M should have been delivered to all formations operating PGRK. This fact determined the required amount of equipment and its role in the troops. Further reports have shown that the plans are being successfully implemented.

Strela and VPK continue the construction and supply of Typhoons-M so far. Each year, the customer receives significant quantities of such equipment, due to which re-equipment of the Strategic Missile Forces security units is carried out. Already in the first years of mass production, it was possible to reach a significant pace and bring the technology score to tens.

So, in 2016, the Strategic Missile Forces received 14 anti-sabotage vehicles. In the next 2017, they acquired 12 units. In parallel, the production and delivery of training complexes for the training of crews was carried out. In 2016, the troops received 10 complexes. Plans of that time included the purchase of another 20 simulators until 2020 inclusive.

A few days ago, the Strategic Missile Forces information support group announced relevant information on the Typhoon-M BPDM fleet and plans for the near future. It is indicated that over the past five years, troops have received more than 30 anti-sabotage vehicles. Until the end of this year, another 5 units are expected to be delivered. In 2021, new revenues will continue, but the volumes of plans and orders are not specified. Also, the official message mentions the supply of simulators, but without specifying specific numbers.

From the available data it follows that in 2020-21. the total number of 15DM56M BPDM in RVSN units will reach the level of 35-40 units. Also, the implementation of old plans for the supply of 20 simulators by 2020 is being completed. Their number will reach 30 units. It can be assumed that the production of BDMs and auxiliary systems will not stop there. 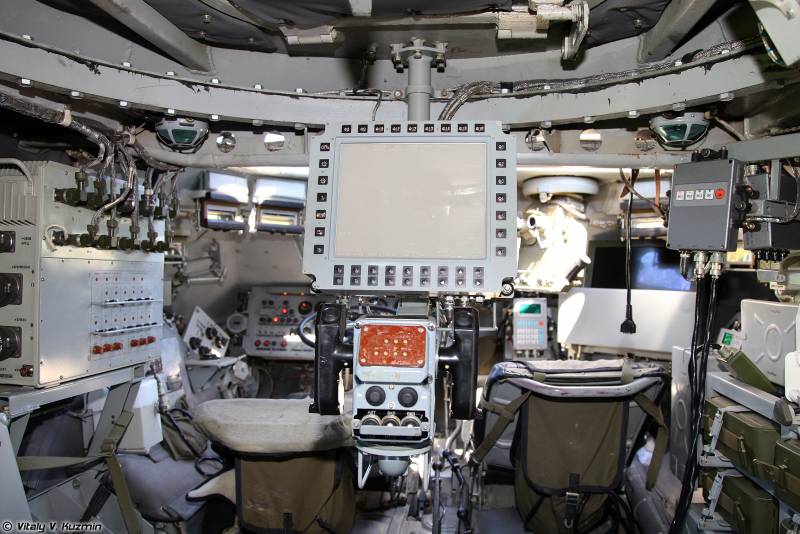 The interior of the inhabited compartment. In the foreground is the gunner’s remote control. Photo by Vitalykuzmin.net
The aim of the current serial production of "Typhoons-M" is the complete re-equipment of anti-sabotage units of the Strategic Missile Forces. Each of the 12 missile divisions has a separate guard and reconnaissance battalion (OBOR). Half of the divisions operate PGRK, which makes special demands on equipping its OBOR. Such parts require a number of samples of a special kind, including combat anti-sabotage vehicles.

The supply of 35-40 BPDM type 15TS56M will allow retrofitting at least most of the OBOR divisions of the Strategic Missile Forces. Further production of such equipment will ensure a complete transition to it, and will also create certain reserves. Mass production of training complexes, in turn, will provide high-quality training of crews from all battalions.

For reconnaissance and battle

BPM "Typhoon-M" is intended to escort PGRK on patrol routes and starting positions; such a technique is capable of monitoring the terrain and searching for threats, responding to them in the necessary way. As the name of the technique implies, its main task is to counter enemy sabotage groups.

15TS56M is made on the basis of the BTR-82 serial armored personnel carrier and retains its main elements - the hull, powerplant, chassis, etc. Inside and outside the hull, new units are mounted that provide the solution to the tasks of reconnaissance and destruction of the enemy, communications and control, etc. 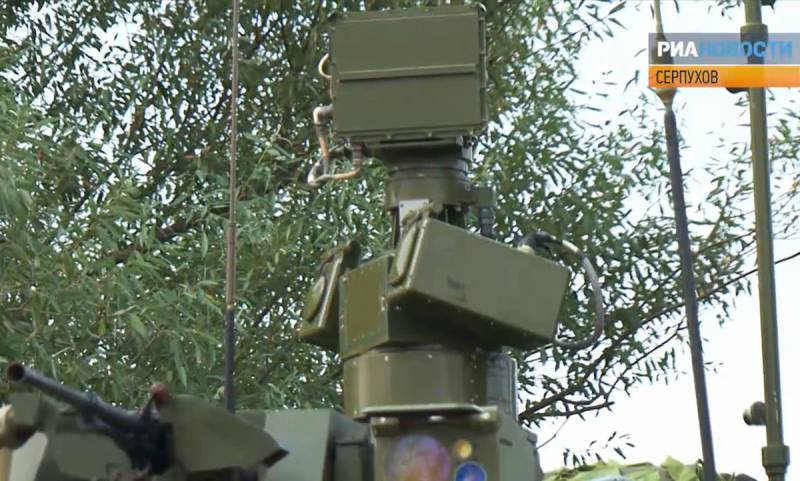 Mast with radar and optical instruments. Frame from the RIA report News, 2013 city
Instead of a standard tower on the roof of the hull, a remote-controlled turret installation 6S21 of the Central Research Institute "Petrel" is mounted. It is equipped with a PKTM machine gun and optoelectronic devices for working in the light and dark.

Behind the installation on the roof of the hull is placed a lifting mast with a set of reconnaissance and surveillance tools. The machine has a compact radar and optoelectronic equipment. A circular view is provided with the discovery of equipment at distances of up to 10 km, people - up to 5 km. For reconnaissance at long ranges, the UAV Eleron-3SV is used. In the data transfer mode to the operator’s console, it can work at a distance of up to 25 km.

The on-board equipment complex includes an electronic warfare system. The jamming station is designed to suppress the radio control channels of explosive devices used by the enemy.

On-board electronics allows you to process data from reconnaissance equipment and from a turret with the subsequent issuance of information. The crew of the Typhoon-M maintains constant contact with the command post and other vehicles on the route and can respond to any threats in a timely manner.

The work of the BFM "Typhoon-M" is managed by a crew of three. The airborne squad accommodates up to six fighters with weapons. 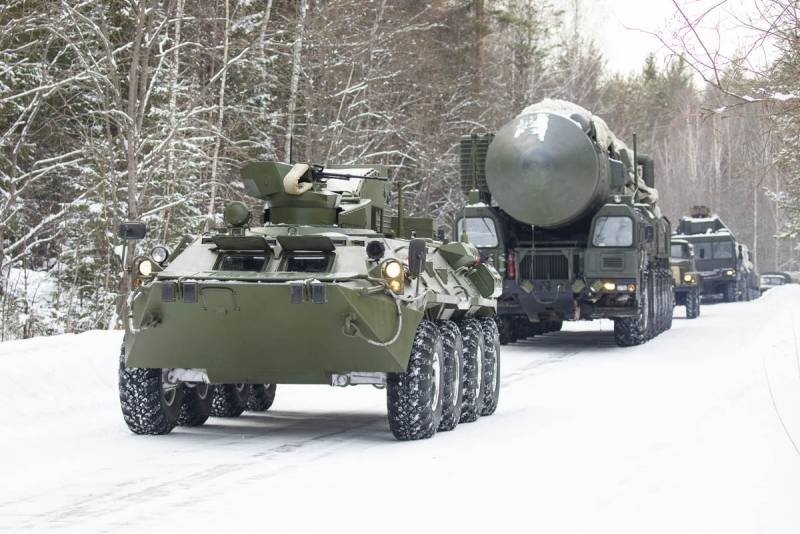 BPM "Typhoon-M" accompanies PGRK on patrol. Photo by the Ministry of Defense of the Russian Federation / mil.ru
The training complex for BPDM 15TS56M provides training for all crew members to solve all arising problems and to work in any possible conditions. Imitation of any sections of patrol routes and imitation of any tactical situation is possible.

The Russian Strategic Rocket Forces have organized regular PGRK duty on patrol routes and at launching positions. Complexes in motion or in parking lots can become the target for enemy sabotage groups, which forces them to take measures - to conduct reconnaissance of routes, search for dangerous objects and constantly prepare for a possible attack.

To solve such problems, the Strategic Missile Forces have a whole range of tools. PGRK are accompanied by arrows on armored personnel carriers, anti-sabotage vehicles "Typhoon-M", remote clearance vehicles "Foliage", etc. Having such a material part, the security unit can monitor the situation within a radius of several kilometers, identify potentially dangerous objects, and then take the necessary measures.

In such a system, the Typhoon-M BDM is a key element that determines the ability of units to identify hazards and risks. The number of such equipment in the troops is gradually increasing, and with it the security of patrolling the PGRK is also growing, which has a positive effect on the combat effectiveness of the missile forces as a whole.