And a winner
And defeated
In the game of this world -
No more than a drop of dew
No longer a flash of lightning.
Ouchi Yoshitaka (1507-1551)

Weapon and firms. And it so happened that, having suffered a crushing defeat in the Second World War, Japan experienced terrible national humiliation. In fact, the country was crushed - in every sense. In 1950, in terms of its economic development, it was in the same place with Egypt. However, she started her own armed forces, and the Korean War breathed life into her economy. And the “Japanese miracle” began, a miracle, first of all, borrowing and modernization, and the borrowing of everything and everything touched the Japanese armed forces. 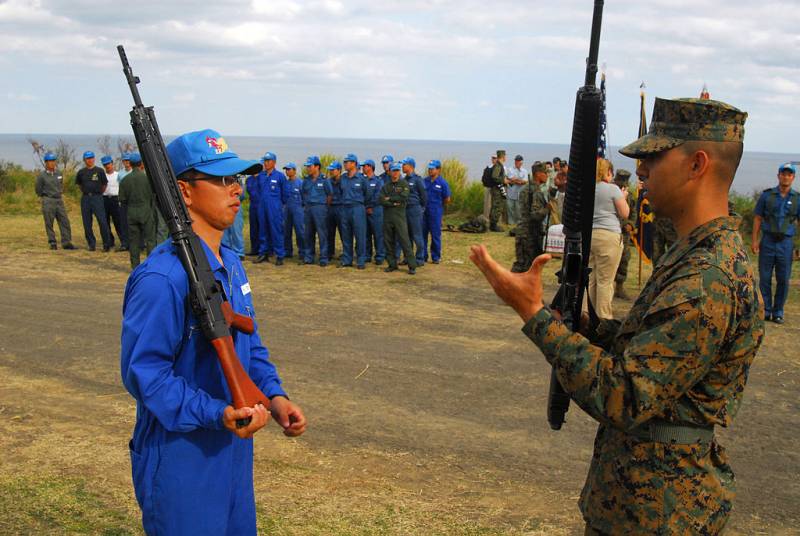 Iwo Jima Island, 2007. An American instructor shows gunner techniques to a fighter of the Self-Defense Forces. Japanese soldier (left) armed with Type 64 rifle
In the mid-1950s, the Self-Defense Forces Command of Japan decided to replace the American M1 Garand rifles and M1 carbines that were in their arsenal. In March 1956, Japan and the United States signed the Standardization Agreement, as a result of which the new full-time cartridge of the Japanese army became 7,62 × 51 mm NATO, but with a 20% reduced charge and a 10% reduced initial bullet speed. But the return decreased, which for short and weak post-war Japanese was of great importance. In the same year, General Kijiro Nambu and Colonel Kenzo Iwashita at the Howa Machinery Company Ltd in Nagoya began work on a new rifle under this cartridge. However, it was only possible to create it in 1964, and then it was adopted under the designation Type 64. The production of Type 64 rifles was carried out at the enterprise in the village of Sinkawa (today - the city of Kiyosu) until 1988. One of the most noticeable features of this rifle was an open shutter with a reload handle mounted on top of it and the ability to automatically switch firing from the front to the rear whisper when the barrel overheated. 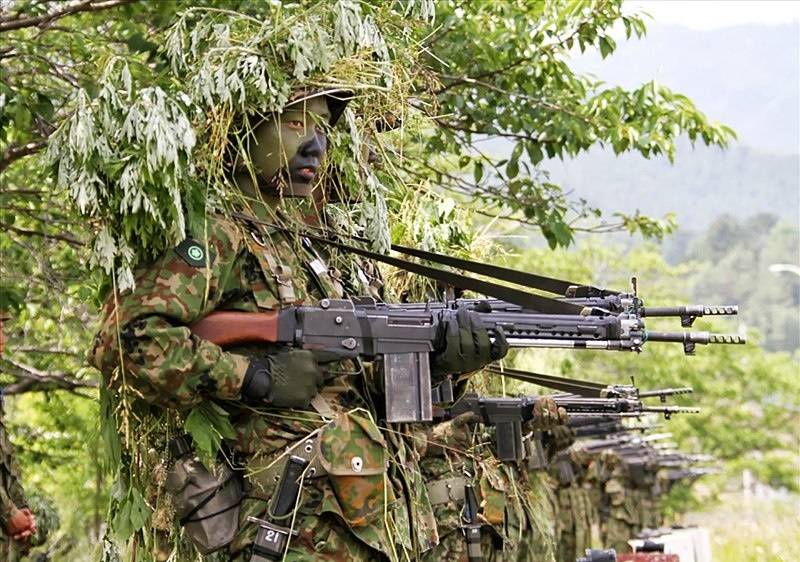 Japanese soldier with a Type 64 rifle in the jungle ... 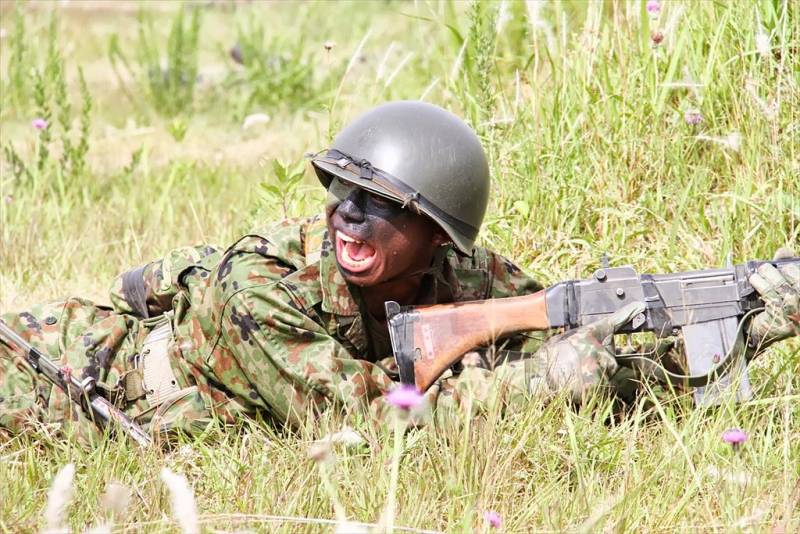 ... and in the grass
The rifle went into service, but then the war broke out in Vietnam, and the U.S. Army began to replace the 7,62 mm M14 rifle with a 5,56 mm M16. Lighter weight and NATO-standard ammunition - all this was very tempting, as Type 64 was criticized by many for its high metal consumption and weight.

Due to the design of the shutter for the Type 64 rifle, it was necessary to develop a non-standard mount for the sniper scope and, in addition, it was not very convenient to use it!

Howa already had a license at that time to manufacture the AR-180 rifle, a commercial version of the Armalite AR-18 rifle. A batch of rifles was released for field trials, and when they gave a positive result, the official development of a new generation assault rifle with the designation HR-16 (HR1604) began, which eventually became the "Type 89", since it was developed in 1989.

AR-180
One of the most advantageous features of the Type 89 rifle compared to the Type 64 rifle was a lower load on the soldier and an increase in the amount of ammunition that he could carry. In addition, due to the use of aluminum and plastic, unlike the steel and wooden construction of the Type 64 rifle, the weight of the rifle itself also decreased, that is, it became more convenient to use.

The fixed-butt version of the rifle has a rubber-coated storage tank inside it. Although the standard model is equipped with a fixed stock, a small number of rifles have a folding stock. Such rifles are made for crews of armored vehicles and paratroopers.

"Type 89 Para" with a folding butt. Right view
It is believed that the rifle is at least as accurate as the Type 64 rifle, that is, they are equal in accuracy. The Type 89 rifle is equipped with a built-in bipod, like its predecessor, to increase accuracy. However, unlike the bipod on the Type 64 rifle, on the Type 89 rifle, the bipods are easily removed because they are attached to the barrel using a spring mechanism and held by a lever lock. In addition, the forend of the “Type 89” is made so that the legs of the bipod fold inside it.

The design of the rifle was directly related to prototypes such as the AR-18 and the Heckler & Koch G3. In addition, since the rifle from the very beginning was designed for the physique of Japanese soldiers, its creators adjusted all the ergonomic and weight characteristics precisely for them.

The complex design and the large number of parts of the Type 64 rifle often became the causes of failures in its operation. Therefore, the number of parts on the new sample has been reduced. Because of this, the cost of a Type 89 rifle has become about half that of a Type 64 rifle. Moreover, if in 1989 it cost 870 yen, then in 000 its price dropped to 2005 yen. Despite this, it is still considered too expensive for mass weapons, since the ideal price, according to the Japanese government, should lie in the range from 340 to 000 yen per copy and no more. 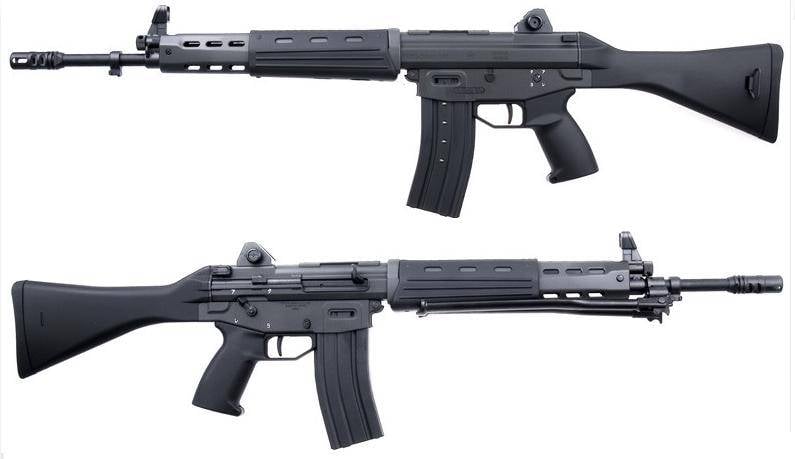 "Type 89". Left and right view
The rifle ammunition for the Type 89 rifle is interchangeable with the 109 × 855 mm SS5,56 / M45 cartridge used by the US and NATO forces. Along with a cartridge of 7,62 × 51 mm, this ensures complete interchangeability with the ammunition stockpiles of the US Army units located in Japan. The only difference is in the marking: since the ammunition designed for the Type 89 rifle is made in Japan, they are stamped with the image of the Self-Defense Forces sakura instead of the typical NATO cross used in SS109 / M855 cartridges. 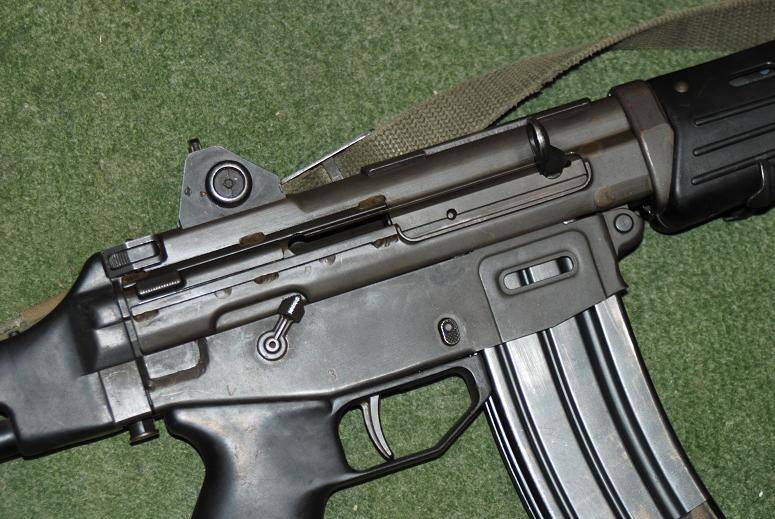 Shutter handle, 4-position fire switch and diopter sight
The rifle has a traditional gas vent mechanism, but the Japanese would not be Japanese if they had at least a little but not modernized it. In this case, they made the front of the piston somewhat narrower than the diameter of the gas cylinder, and even placed it at some distance from the gas outlet. As a result of this innovation, gas energy works in two steps: the initial impulse receives, as usual, the head of the gas piston, but since the "maximum" pressure does not increase in the cylinder immediately, it turns out that it reaches a maximum when the piston is already moving. That is, there is no push, and since there is no push, the rifle mechanism works more smoothly, and this reduces its wear. Such a “small” trifle, but nice!

The Type 89 can use the M16 rifle magazines. However, the store, released specifically for the 89th rifle, has a special pusher that prevents the shutter from closing after all the cartridges in the store are used up. If the M16 series magazine is used, the shutter will close anyway. In Japanese stores, there are four holes that allow you to control the consumption of cartridges. But many people think that this is inconvenient, since the holes allow the sand and all other foreign objects to easily get into the store and cause delays in firing.

It is believed that the bevel of the store’s receiver is inadequate compared to the M16, which is bad, as it increases the time required to reload the rifle in certain combat situations.

Rifle with a magazine from M16
The selector switch is located on the right side of the receiver and has four positions, including fire with the cutoff of three shots.

The bayonet to the rifle can be used as nippers, combining it with the sheath, and the sheath itself, or rather, their tip, can be used as a bottle opener. The M9 American bayonet can also be attached to this Japanese rifle. A rifle grenade Type 06 was developed for the rifle. An American M203 grenade launcher can also be installed on it, but with the appropriate adapter.

A number of long-lasting accessories are also suitable for the rifle, but soldiers should rather buy them, or rather, have the right, for their own money! Even those to whom they are issued must reimburse their value by paying the quartermaster money from their salary.

There were attempts to make a shortened version of this rifle, that is, a “carbine” with a total length of about 800 millimeters, with four Picatinny rails. An aiming system was also developed, which includes a rangefinder and a video camera, which allows you to keep the rifle at a distance from you and nevertheless shoot from it. But so far there is no question of replacing the Type 89 rifle.