Back to the Land of Soviets. Bra for a boy 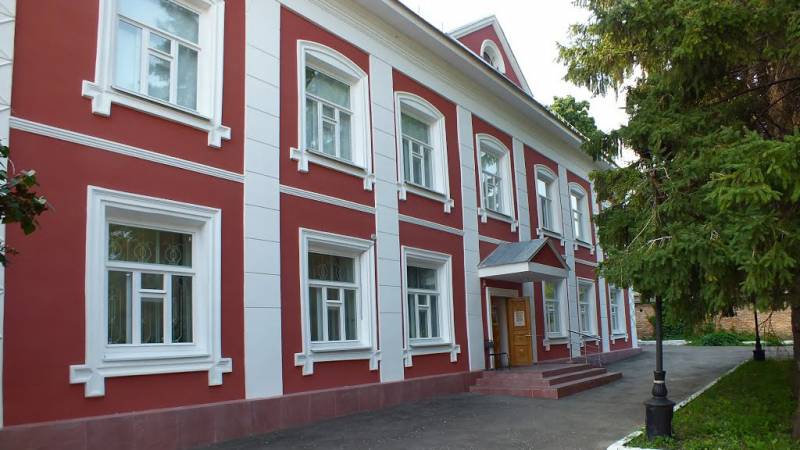 Here it is, the building of the museum of I.N. Ulyanov in Penza. There is a room with very interesting exhibits, which are dedicated to rapidly departing fashion ...

Four-year-old Pavlik quickly jumped out of bed and “dressed himself”, that is, he pulled back a bra with linen buttons and put his bare feet in his shoes.
V. Kataev. Lonely sail whitens

History and documents. We continue the series of publications on the history of the USSR, based on copyright memories. This time the memories will be both “very” old and “not very” at the same time. Reason: the new hall, which opened in the Penza Museum of I.N. Ulyanova and dedicated to fashion at the end of the 19th and only the 20th century. I went there, looked, asked the director for permission to take a picture. So, in fact, this material appeared. 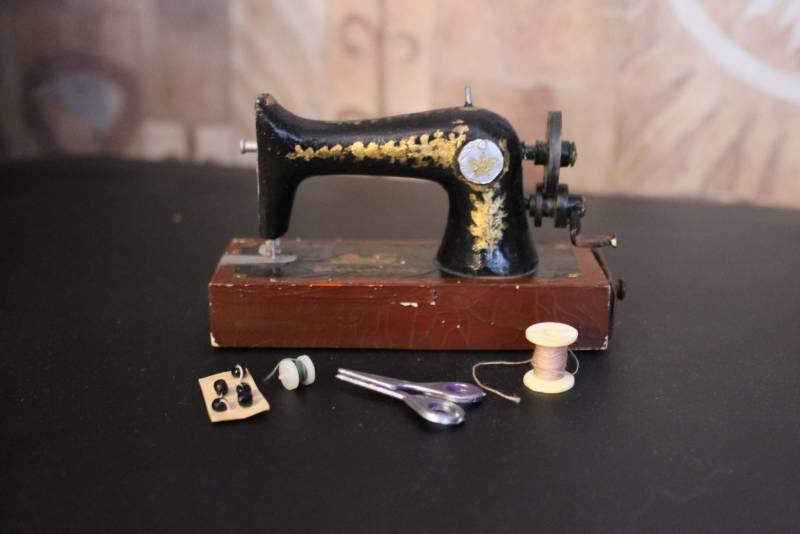 Even in the house there was such a Singer sewing machine. Not foot, manual. It didn’t survive, but I made an exact copy of it on a matchbox for my daughter ...
But let's start with the memories. At first, that is, as I began to remember myself, I did not realize what was happening. Children are like animals, they give - they take, they beat them - they cry, and why, what and how, the kids are not aware. So I did not know why we had such a house: only two rooms and a kitchen, walls that for some reason did not reach the ceiling. A huge stove that needs to be heated with wood and coal, and even cooked on it, and next to it there is a washstand and a sloppy bucket of disgusting appearance, which was required to be poured daily and many times. Water was brought into the house from the street, first grandfather, then mother and grandmother. Grandfather slept at the very door leading to the canopy, grandmother slept in the hall on the sofa, and only my mother and I had a separate small room with a huge wardrobe, two of our beds, a desk and an oval-shaped carved table on one leg , covered with a knitted lace tablecloth, on which in a large pot-bellied glass container a disgusting kind of tea mushroom floated, the "shekals" of which had to be drunk. In the hall there was a round table with a large kerosene lamp, above it, under a yellow lampshade made of fabric - an electric lamp. Between the windows there is a huge pier glass under the ceiling, fan palm trees by the windows, and in the corner there is a black radio plate and Record TV. Well, there’s a dresser with a clock, a bookcase, armchairs, chairs, a buffet ... In a word, you won’t run around. The floor was covered with a huge carpet (the figure shows the palace, but this is wrong). 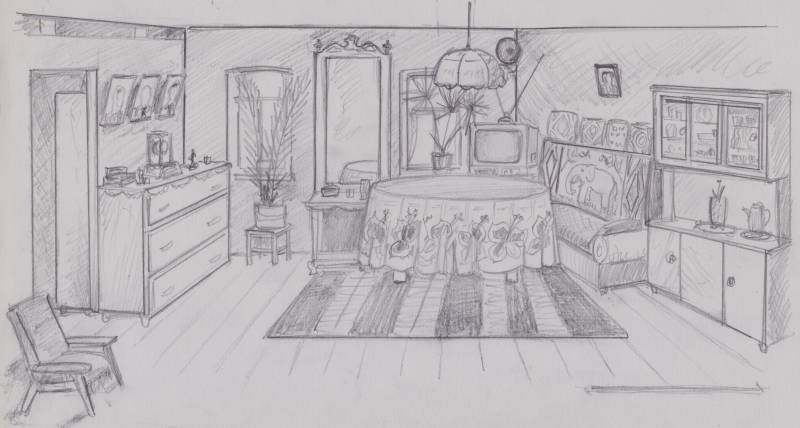 Here the hall looked. Author's drawing
Later I learned that my grandfather during the war was the director of the city administration, that he has two orders - Lenin and the Badge of Honor, but for some reason he sleeps at the door to the very entrance. “But he is alive,” he answered me when asked about “improving housing conditions,” and that was the end of the conversation. It is interesting that the furniture, although of various sizes, was generally very beautiful and of high quality, except for a buffet bought already in my memory. 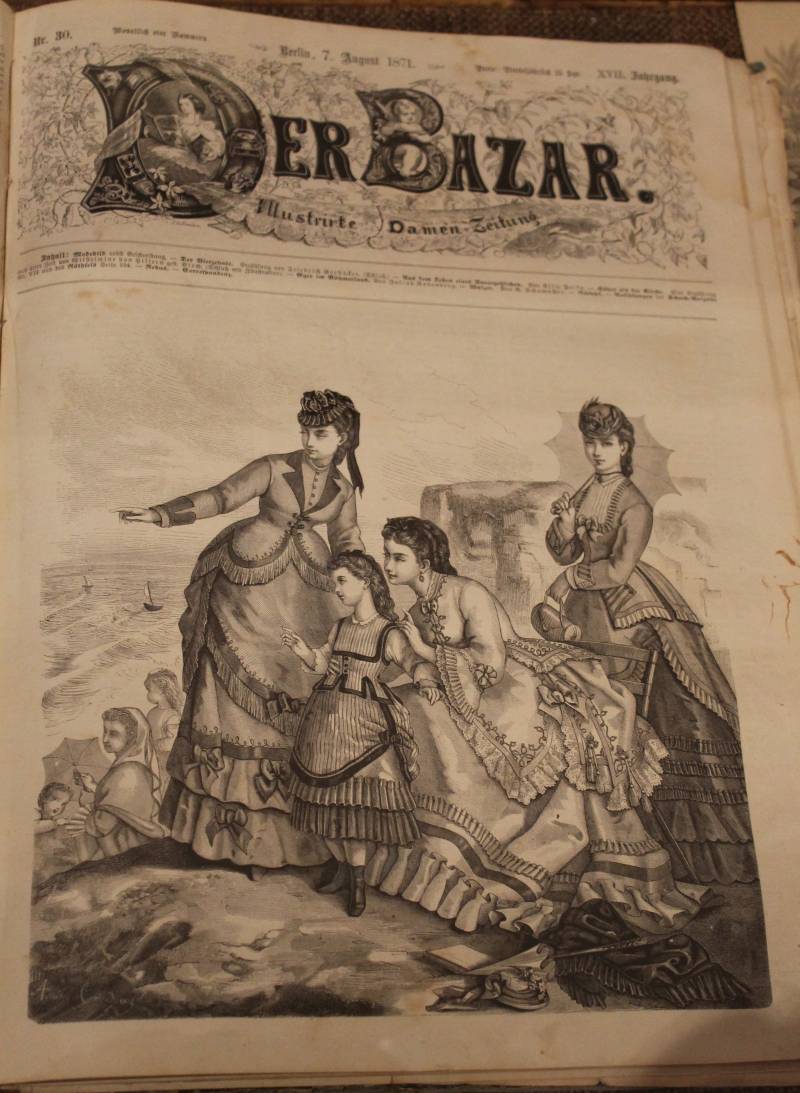 Similar magazines were kept in our attic 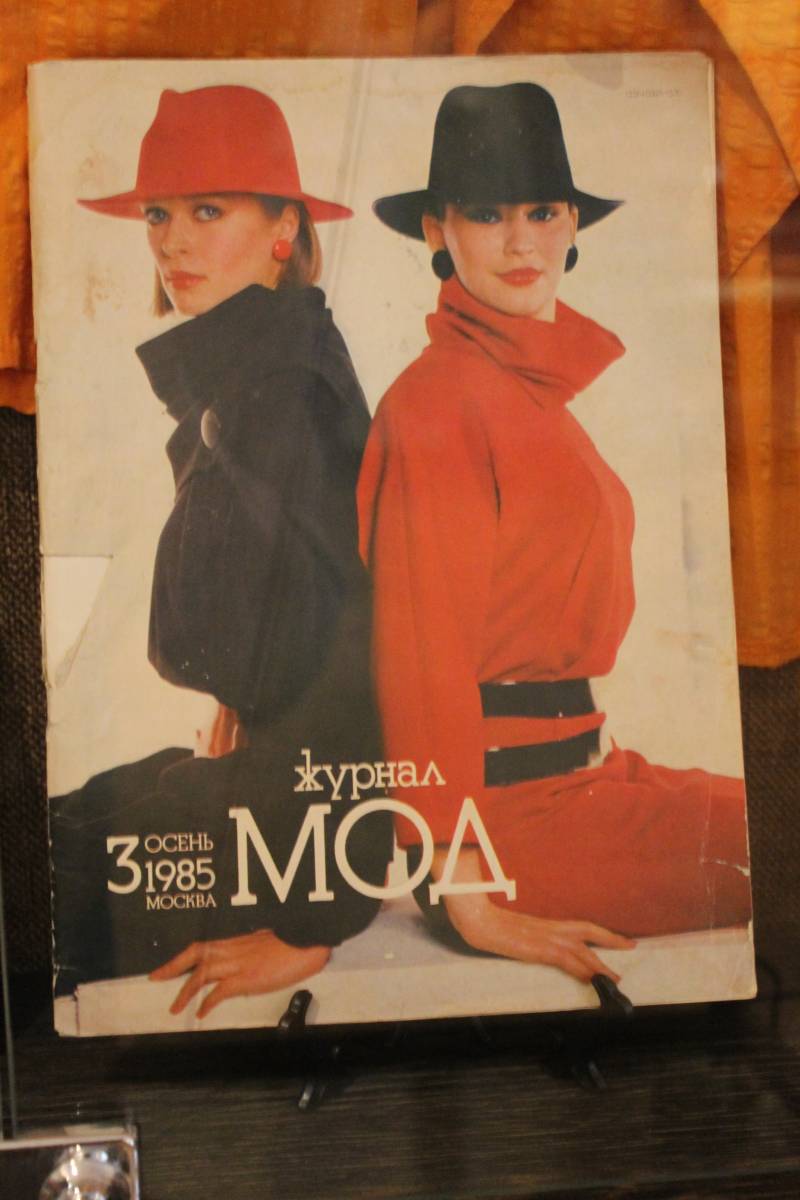 But this is a fashion magazine already in 1985
And among all this, I had to be in the early years, especially when it was impossible to go outside, that is, in autumn, when it is cold and dirty, in winter, when snow and frost, and in spring, when everything melts and is wet. That is, most of the year. After all, we must remember that there was no asphalt on our street then. I had to walk on wooden sidewalks - boards stuffed with transverse logs, and all this squished, slipped, drowned in mud. The yards of the neighboring boys, like mine, were little adapted for games, so little children had to play the role of “prisoners”. 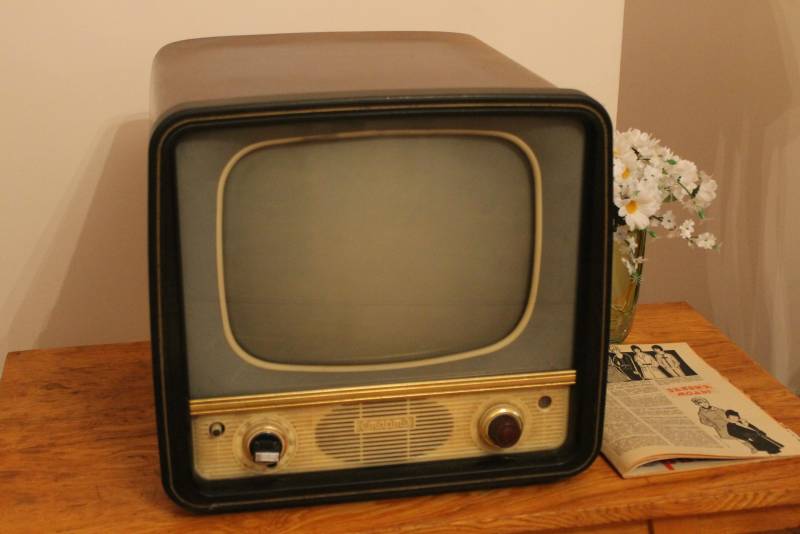 In addition to the “Record”, this “Start” was also produced
Already much later, after reading “The Lone Sail Whitens” by Valentin Kataev and “The Brokeback Bear” by Evgeny Permyak, I was surprised at how the childhood of the heroes of these books is described there and how it looks like my own! The same lamps and rugs on the floor. True, I have a school, they have a gymnasium, but even the uniform, and that was similar to the gymnasium until 1963. And the clothes of young children were just one to one! 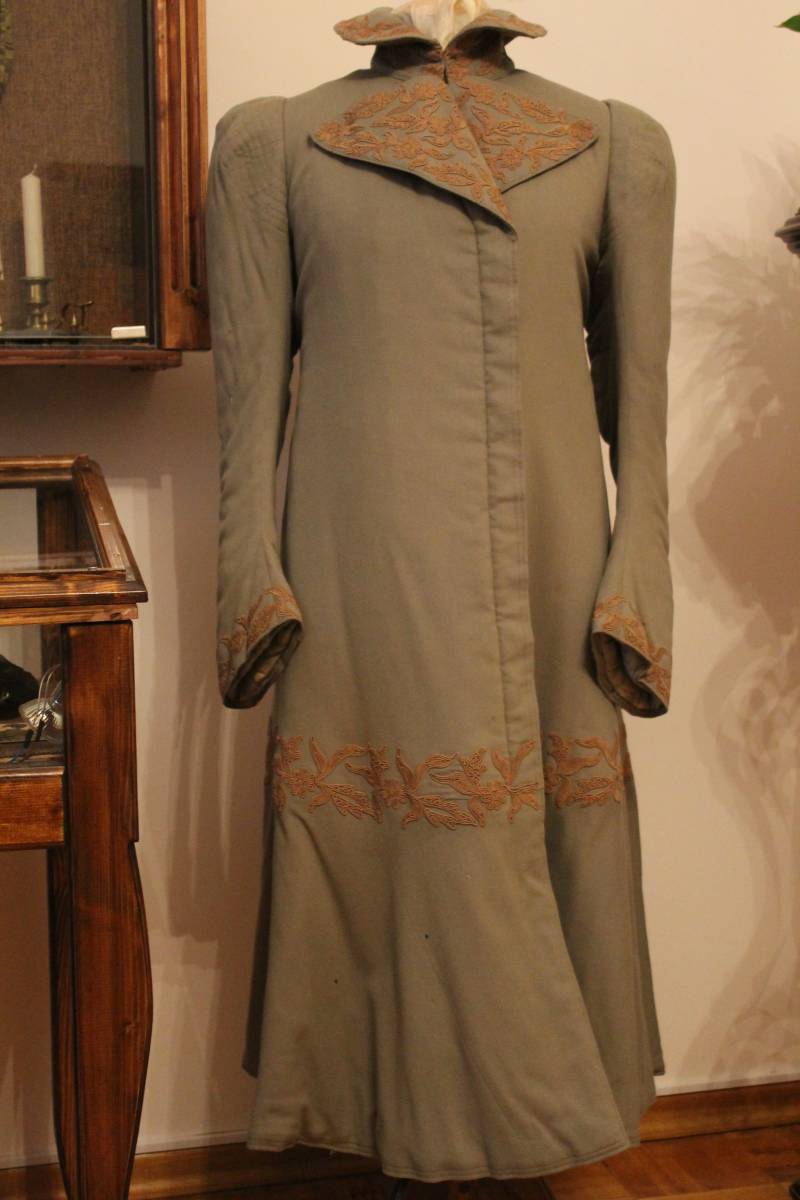 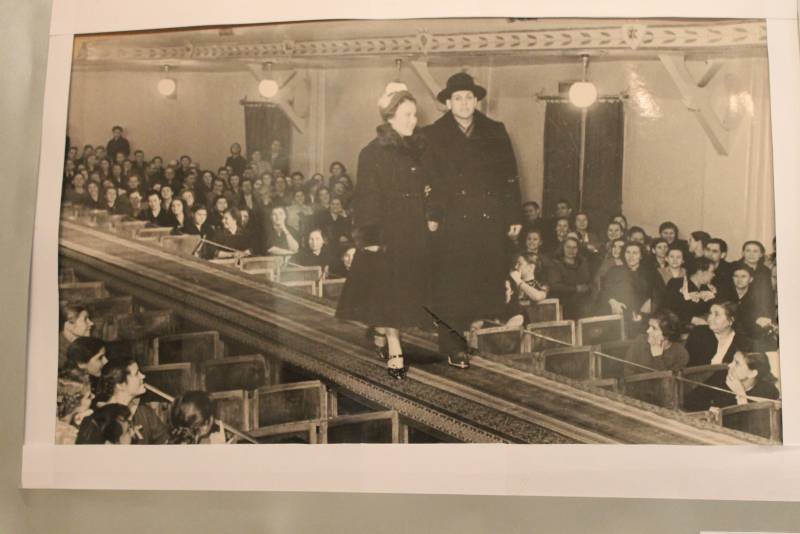 And this is a fashion show in 1957 in Penza in the Palace of Culture. Dzerzhinsky
For example, at the most tender age I was supposed to have long satin shorts in the summer and warm panties in the winter. Mike, and on top of it - well, exactly the same flannel bra as Pavlik’s, but I always tried to wear it with buttons in front. He had two straps, walked at the level of the abdomen and chest, and below him were four harnesses sewn with very tricky stockings. Stockings, brown in a rib, had no gum at the top and, of course, fell off their feet. They were fastened to these fasteners, and the grief was bitter, if suddenly in decent society they were unfastened. The fact is that on a visit to the relatives of the children then they were dressed in short pants such as shorts, again on the help (well, just like in another cult film, “Chuck and Huck”), crossed at the back and straight in front. And the stockings from under them were visible, of course. 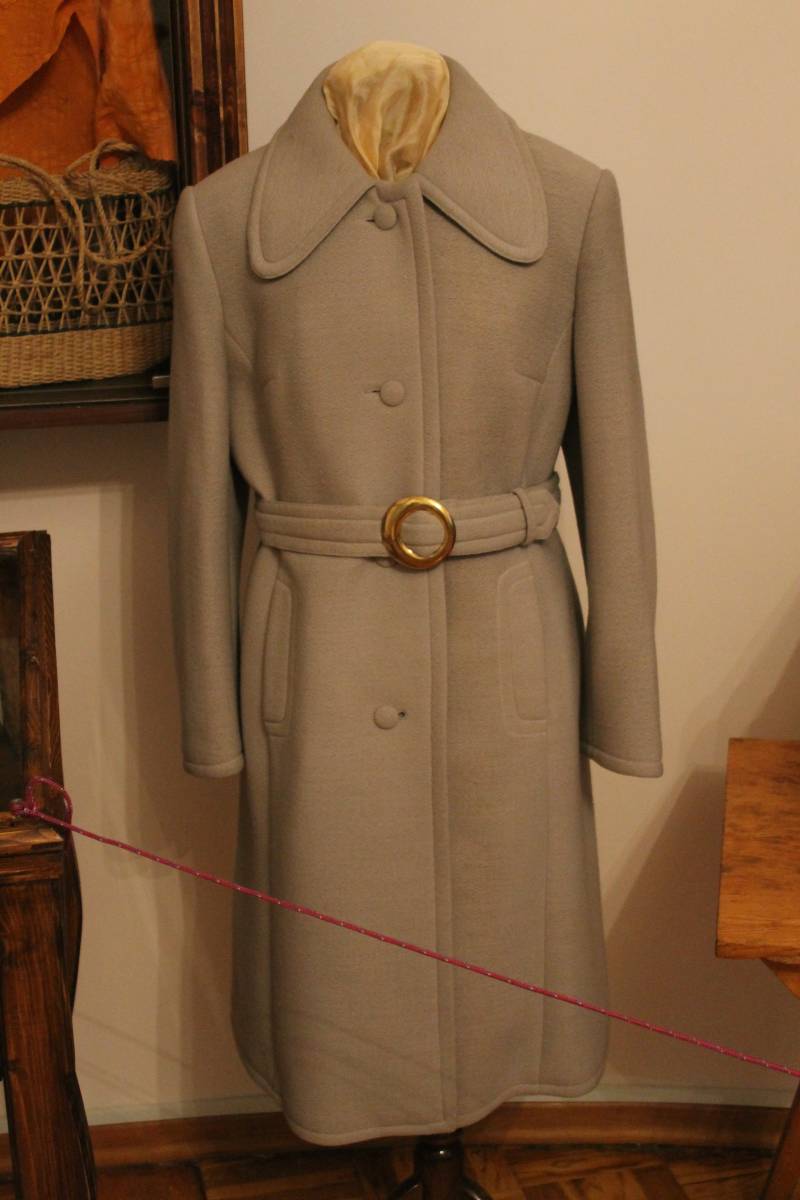 And this is a 1976 light overcoat
Surprisingly, the boys in these shortest panties did not have stockings at least from under them, but for the girls the fashion was simply amazing: short skirts in the mouth, under them multi-colored panties of delicate color shades, and from under them just these very harnesses with fasteners stuck out, and just enough so that the bare skin between the stocking and the skirt was visible! A modern person can admire this strange fashion in the movie First Grader (1948). Especially in the scene where the boy Seryozha comes to visit the "first grader", and a crowd of girls meets him in the hallway. 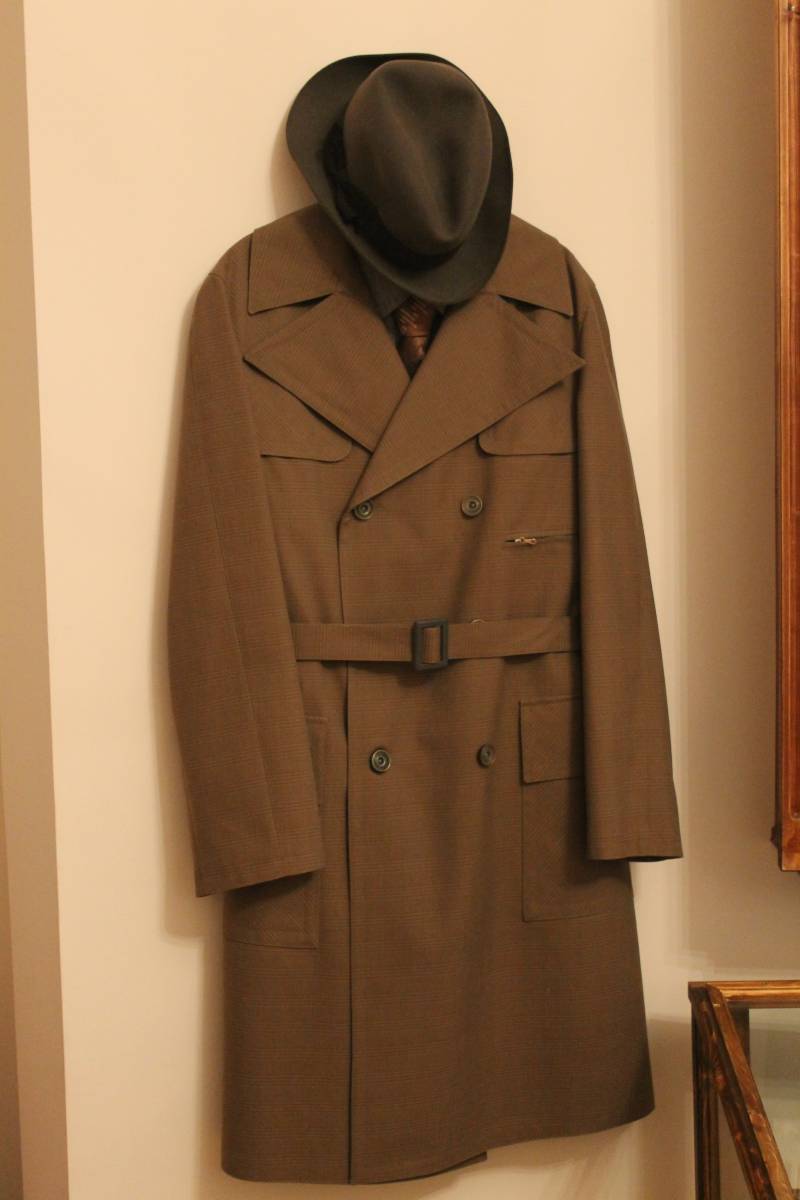 1977 Cloak and Hat. In this I went, only in a light and with a white silk scarf. Like in the movie "Beat First, Freddy!"
However, the leggings sticking out from under the skirts of the girls and bare legs with stockings didn’t cause any “such” thoughts for me, and even for the other boys. It was just that this strip was a tempting target ... for shooting from a finger slingshot from a Hungarian gum! And the best reward to anyone who got there was a loud girlish screech! But it was not necessary to wear stockings short on fasteners! 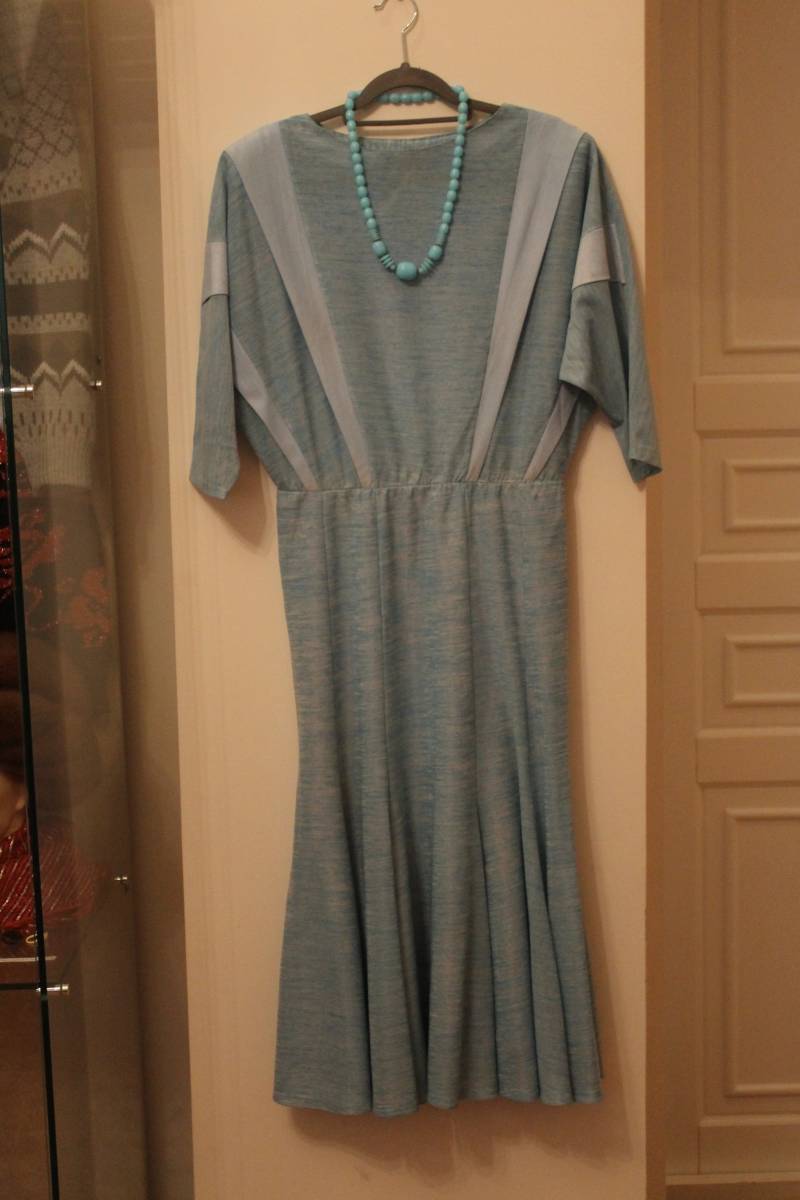 In the USSR there were many woolen dresses, many of which were knitted, and they were knitted in special ateliers to order
The girls also had panties with elastic bands around their legs. The boys were strictly forbidden to wear them ... unwritten street rules. “He has girlish underpants! Beat him!" So then we usually screamed, it was worth noting. Therefore, as I got older, I just demanded that I do not buy this. “But it’s convenient,” my mother told me, “and“ underneath ”(as they said in the late 19th and in the mid-20th century about upper and lower clothes)!” But I was adamant, knowing that if they saw such a thing on me, then I would not be happy. The same attitude, however, already when I was in school, for some reason, existed with respect to pants. They were different, again in pastel colors, and insulated, while in adults they are mostly white and “canvas”. That is, in winter, in the cold, under uniform school trousers, you could put on sports pants. But not pants! As soon as someone on someone saw them in preparation for a physical education lesson (and we then changed clothes right in the classroom), a loud cry rang out right there: Beat him!" Why it was necessary to beat everyone, let’s say, who differed in clothes from others, I couldn’t understand, but that was the norm in our lives.

And how to wear men socks without elastic bands? To do this, we used "garters", also rubber, but with buckles that blinked to fix them on the leg below the knee. And each such “garter” had a harness with a fastener for a sock. By the way, it is precisely about such a men's garter that we are talking about in A. Gaidar’s short story “The Fate of a Drummer” and the movie of the same name. Usually they wore them over the underpants, and this was very inconvenient, since they also sometimes fell, with socks, and shamefully crawled out from the legs. This was immediately called the "garter." Like, watch your toilet! 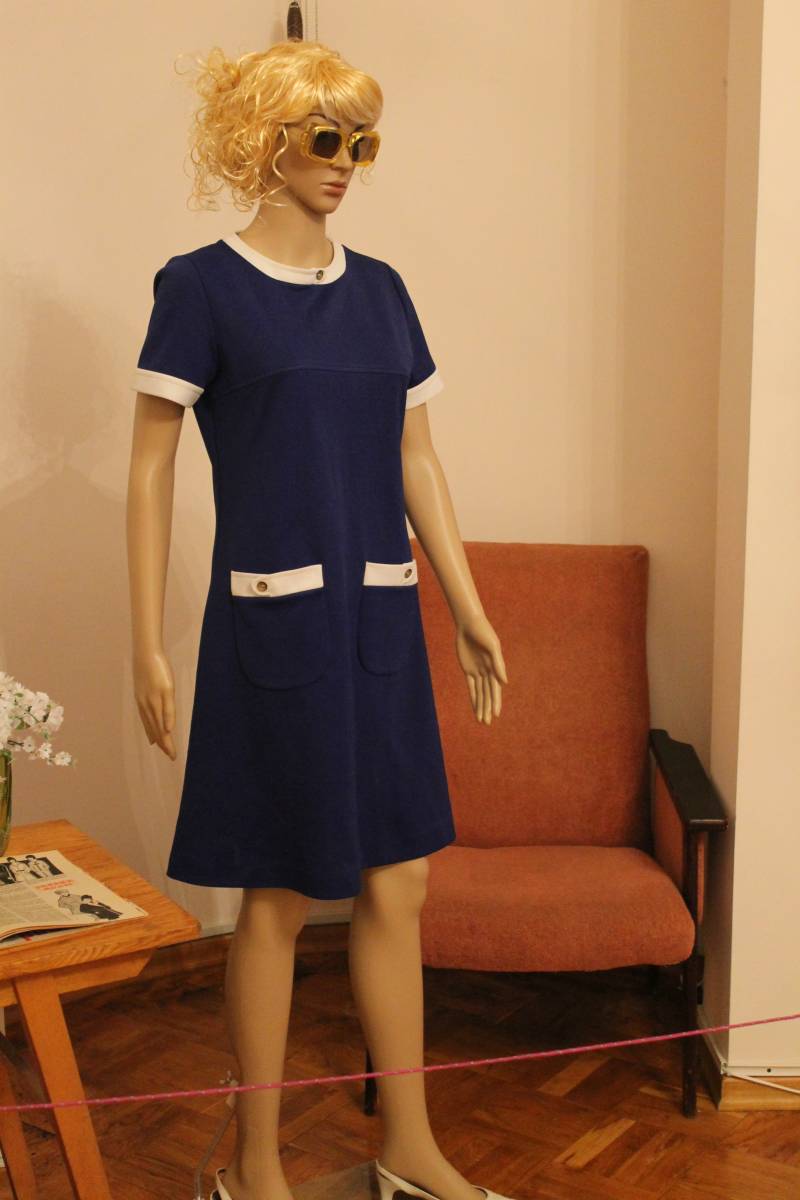 60s fashion ... A little more and miniskirts will appear!
However, only somewhere until the 8th grade, and there we already became much more tolerant and educated. And before that ... Oh, some of us were all savages, by golly! One boy during the rehearsal of the next litmontage, on which our "class" from the 1st to the 4th grade was obsessed, described himself ... and ran to the toilet, leaving behind a drop ... So what? The whole class rushed there behind him, with wild cries: “Hit him, he pissed!” 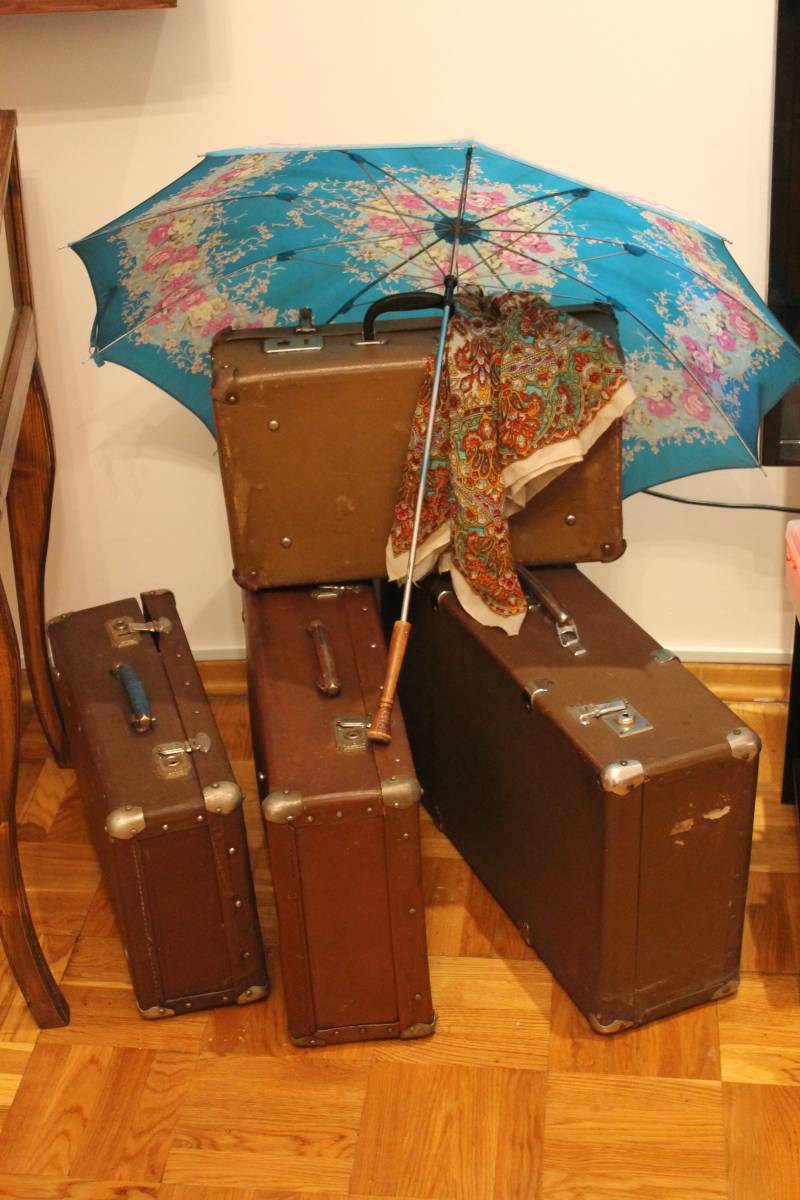 The suitcases were just awful. Fiber, with iron corners. To “hide” everything, they put covers on them. But they were not allowed to wear suitcases in covers abroad, and in 1968 my mother and I had to buy brand new ones for a trip to Bulgaria
It was hard at school for the chubby ones, those who were overweight. (Not like now, as I look. Nobody pays attention to them at school. I asked my granddaughter many times.) But we used to have insulting nicknames: Zhirtrest, Zhiryaga and the like. And at a break they pushed full with shouts: "Squeeze out fat from fat!" Such was the wonderful Soviet upbringing that many today regret so much! 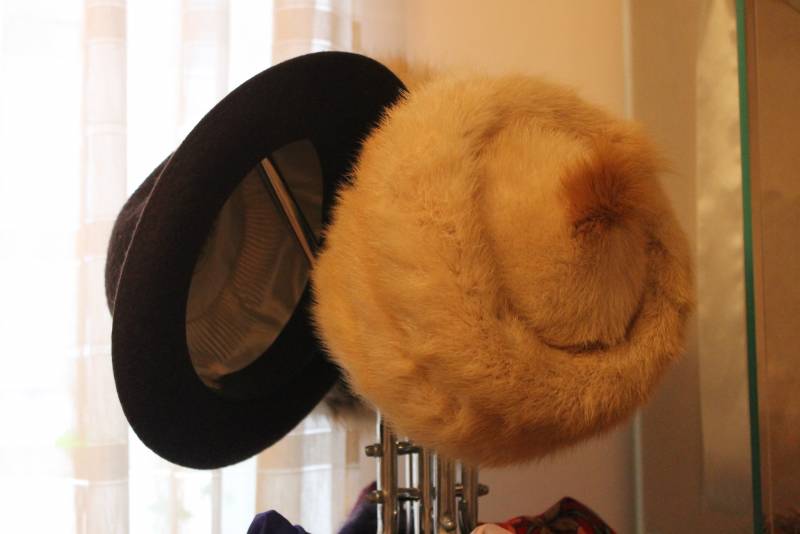 Headwear
Until 1968, children had little clothing. In summer, we ran in T-shirts, underpants and satin bloomers, and in spring and autumn, if it was warm, for example, I was given an old little coat called “three-run three-piece”, a cap (just like the “cap” of Emil from Lönneberg), which I very fond of, and old paid pants. Reason for love: in this I was allowed to wallow on the ground anywhere! For example, we lay down on the embankment of the railway and rolled down a "log". Naturally, with such wild games, any decent clothes were simply contraindicated for children. Personally, when I returned from the street, my appearance was often worse than that of the current homeless person. 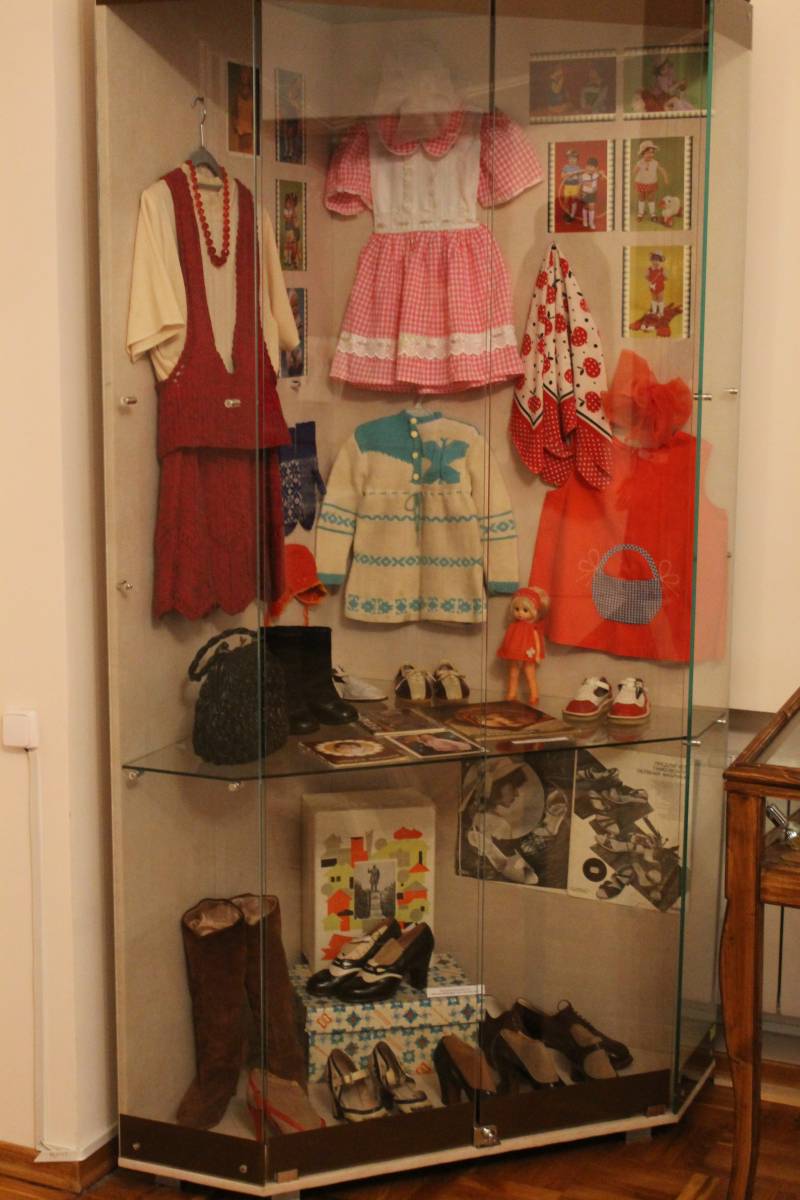 Baby clothes. A lot of knitted things. My wife then also constantly knitted something on my daughter ... By the way, imported suede boots (on the left) at that time cost 125 rubles - a whole salary!
It is interesting again that running in the street in summer was possible only in shorts, and in swimming trunks, which also did not have elastic bands and were tied on two ropes on the sides, in no case. This was called “running naked”, and for this we were punished by the fact that then we were not allowed to go outside! Strange fashion, strange customs ... 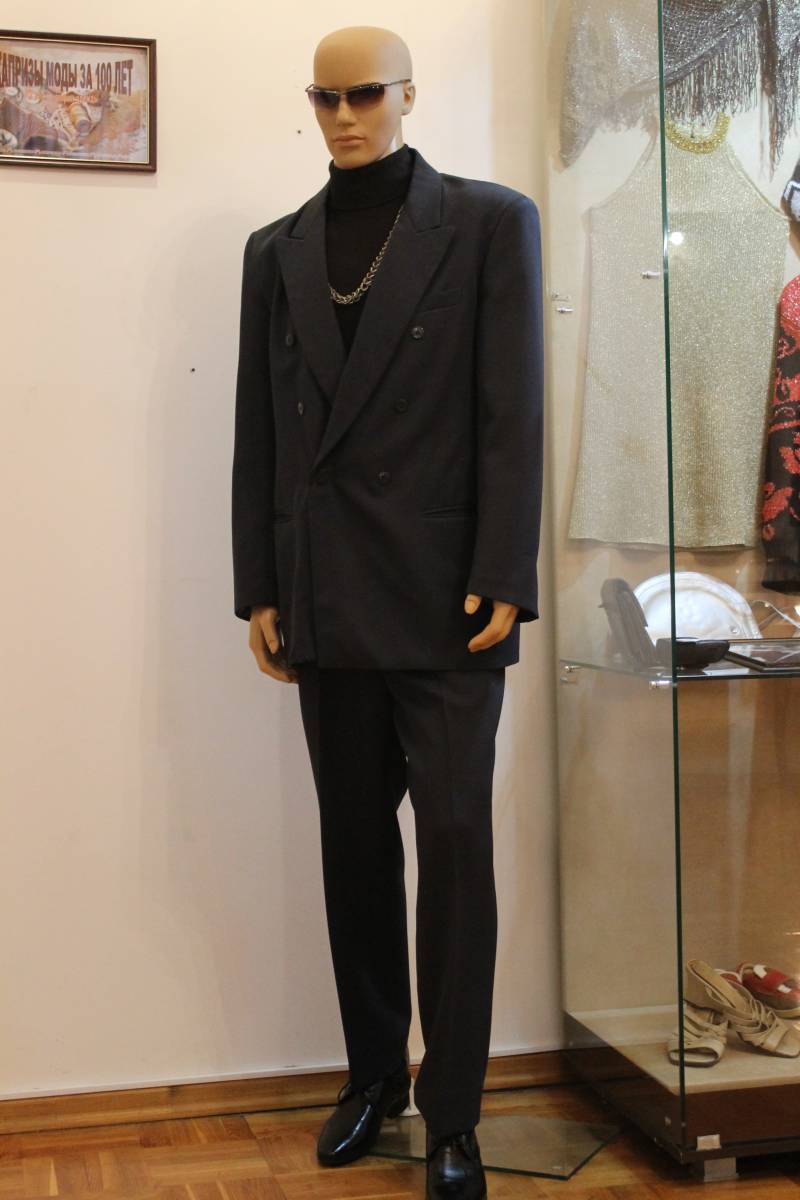 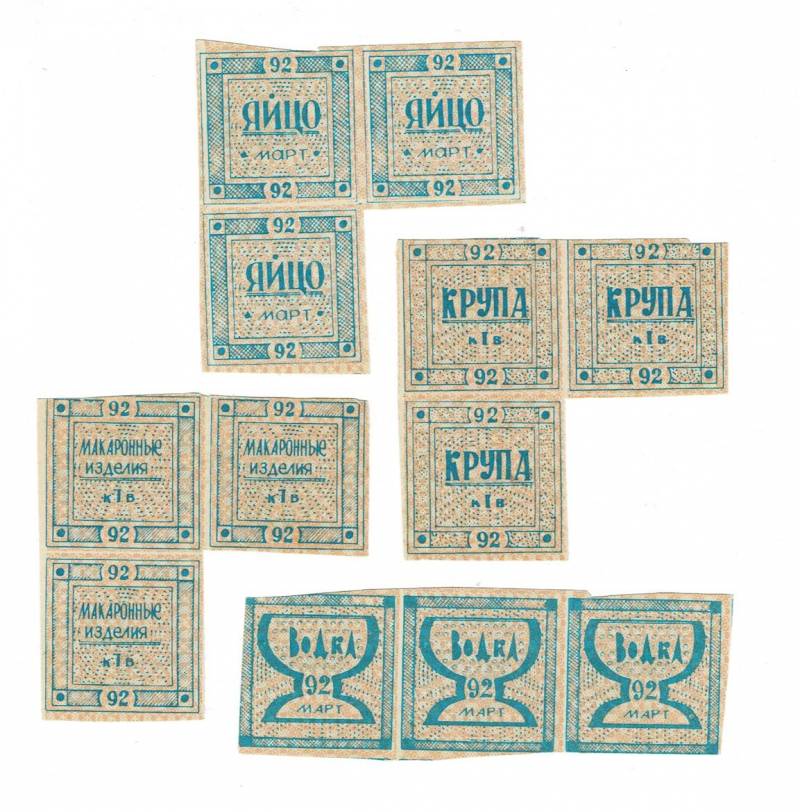 PS The author thanks the administration of the museum, I.N. Ulyanov in Penza for help in organizing photography.