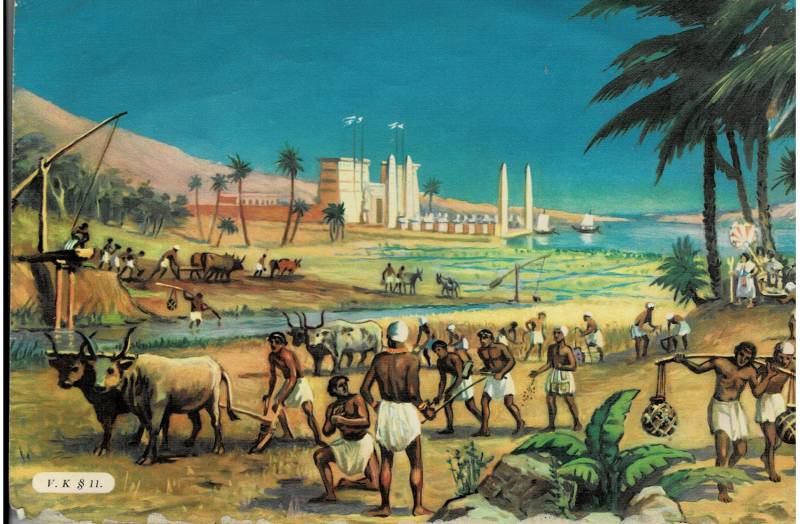 And again, we begin the illustrative series with a picture from a textbook on stories The ancient world for the 5th grade of the old Soviet school. As you can see, the clothes on the Egyptians as a whole are not very clearly drawn. Something white, like a skirt, but not at all what you will see later on genuine Egyptian frescoes, but children don’t need anything else. And so the appearance of the temple, and the nature of the field work - everything was conveyed very carefully. I don’t even dare to guess how much an artist would request today for such an illustration, and most importantly, what would we get in the end ...

... and take off the linen clothes that he put on when entering the sanctuary ...
Leviticus 16:23

Culture of clothes. Today we will get acquainted with the clothes, jewelry and hairstyles of the ancient Egyptians - people who created a unique civilization and paid great attention to their appearance. However, at first it would be appropriate to lead the periodization of ancient Egyptian history, so that later, in the text of the article, this is not distracted.

To begin with, people in Egypt appeared more than 40 thousand years ago, but the first state formation, Pre-Dynastic Ancient Egypt, appeared there about five thousand years BC. This was followed by the era of the Early Kingdom, followed by the Ancient Kingdom, the time of the pharaohs - the builders of the pyramids, the First transitional period (the "Time of Troubles"), the Middle Kingdom and the Second Transitional Period, finally, the New Kingdom and the Third Transitional Period. His further history in connection with our topic is uninteresting, because the Assyrians, Persians, then Alexander the Great, and the Romans and original Egyptian fashion undergo a very strong foreign influence in Egypt. 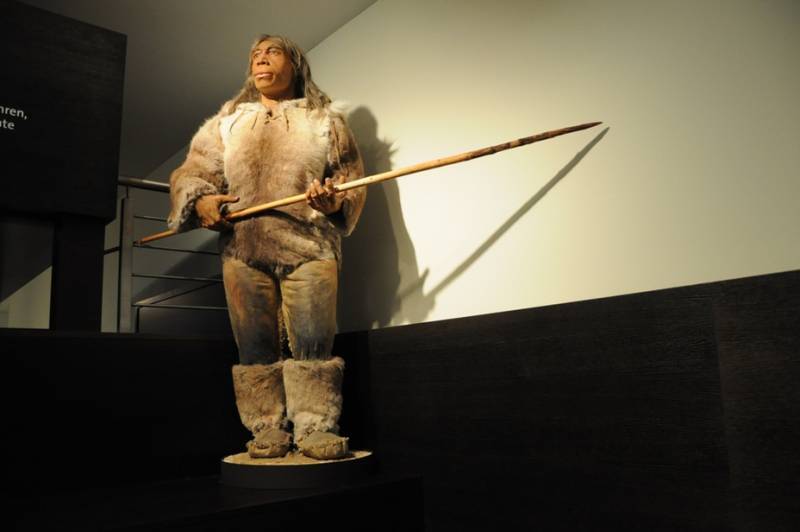 It is clear that the nature of the clothes was associated with the climatic conditions of the places of residence. And, of course, the Paleolithic hunter in fur clothes was different from the exact same hunter who hunted in the Nile Delta. Archaeological Museum, Bonn
And it should be noted that for all these three long epochs and intermediate periods, the clothes of the peasants and the common people were very simple and usually consisted of only one linen apron. During field work, it was often shot. It was believed that all clothes constrain movement, and therefore many preferred to work in what the mother gave birth. 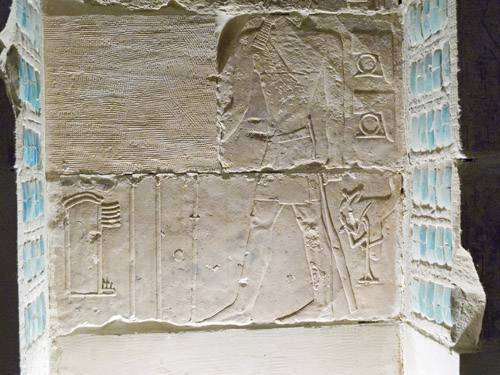 The image on the wall of one of the corridors of the dungeon of the Djoser Pyramid
Noble people in the era of the Old Kingdom tied aprons on their hips with wide sashes. In addition, even then wide collars in a wide variety of materials were in fashion: from colored glass, semiprecious and precious stones to gold. 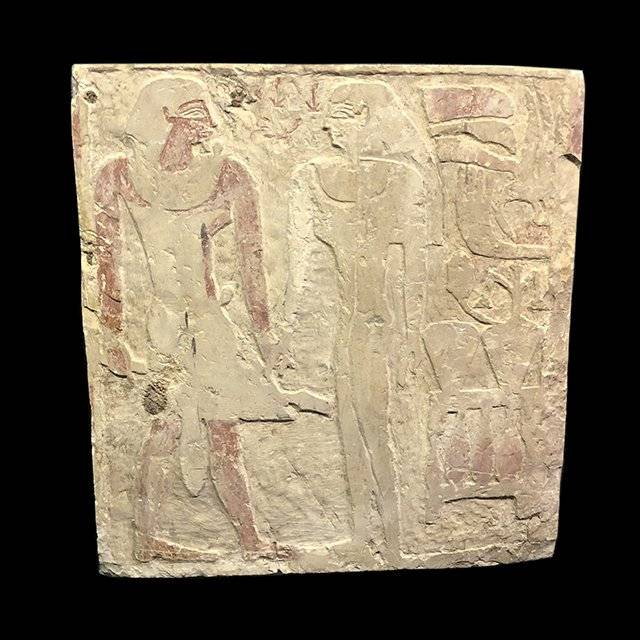 Husband and wife, with a wife called Senet. The first transition period. Cairo museum
The hair on the head was shaved not only by men, but also by women, and wigs were put on a shaved head - short, curly and long with straight strands and parting. A wig made of twisted sheep’s wool was also a headdress and ... a helmet for a warrior, who again wore just an ordinary apron and a shield, covered with cow skin with wool outward. 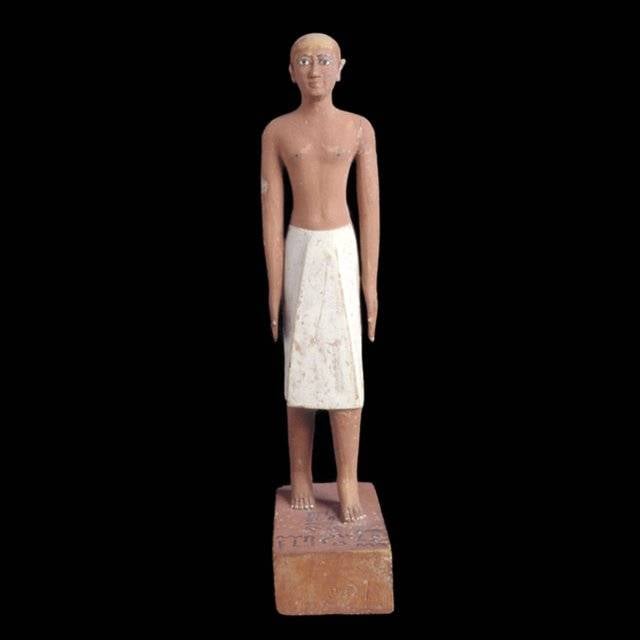 Human figurine. Middle Kingdom Cairo museum
Over time, however, tastes became more sophisticated, and the needs of people more and more extensive. And to the New Kingdom, there was not even a trace of the former primitive simplicity of men's clothing. The apron was replaced by an exquisite suit remotely resembling a long skirt with small pleats. 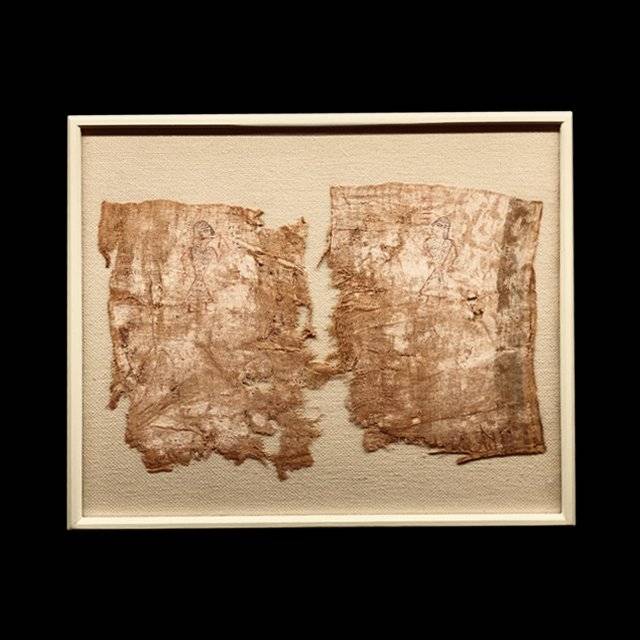 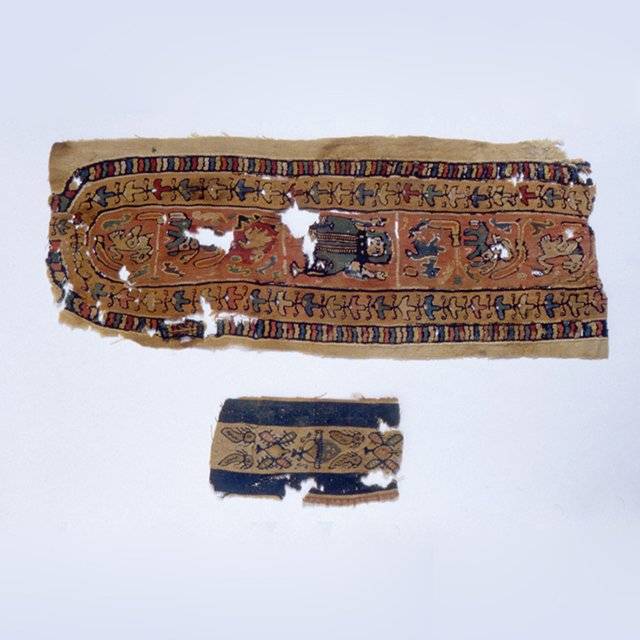 And this is also a rarity - the remains of the Coptic tissue, the heirs of the ancient Egyptians. Cairo museum
From the images that have reached us, you can even trace the changes in the fashion and tastes of the Egyptians. Of course, all of them belonged only to the wealthy strata of the population, and the poor were content with the simplest clothes and did not pursue fashion.

So, in the time of Queen Hatshepsut, a short but wide shirt with a sash comes into use. It became a custom to cover her upper body with her, although until then the Egyptians walked naked to the waist. Under Akhenaten, long pleated aprons come into fashion. They are worn in two pairs at once, with the upper one being shorter so that larger folds of the lower one peeped out from under it. The ends of the belt were to hang in the form of a long bow.

Almost all types of clothes of the New Kingdom are represented on this fresco. Cairo museum
In the future, men's robes became more diverse, although they were based on the same simple apron. Moreover, this clothing was very democratic. After all, the apron was worn by both the last of the peasants and the first of the people, the son of a deity - Pharaoh! But, combining its length and shape, making it smooth, sometimes gathering in folds, then slightly covering the hips, then tightly fitting the legs, then very narrow, then so wide that they could wrap the body three times, the Egyptian tailors altered this very ordinary apron to unrecognizable. So over time, he began to resemble the fashionable ladies' dress of our century, rather than the linen apron of the era of the Old Kingdom. 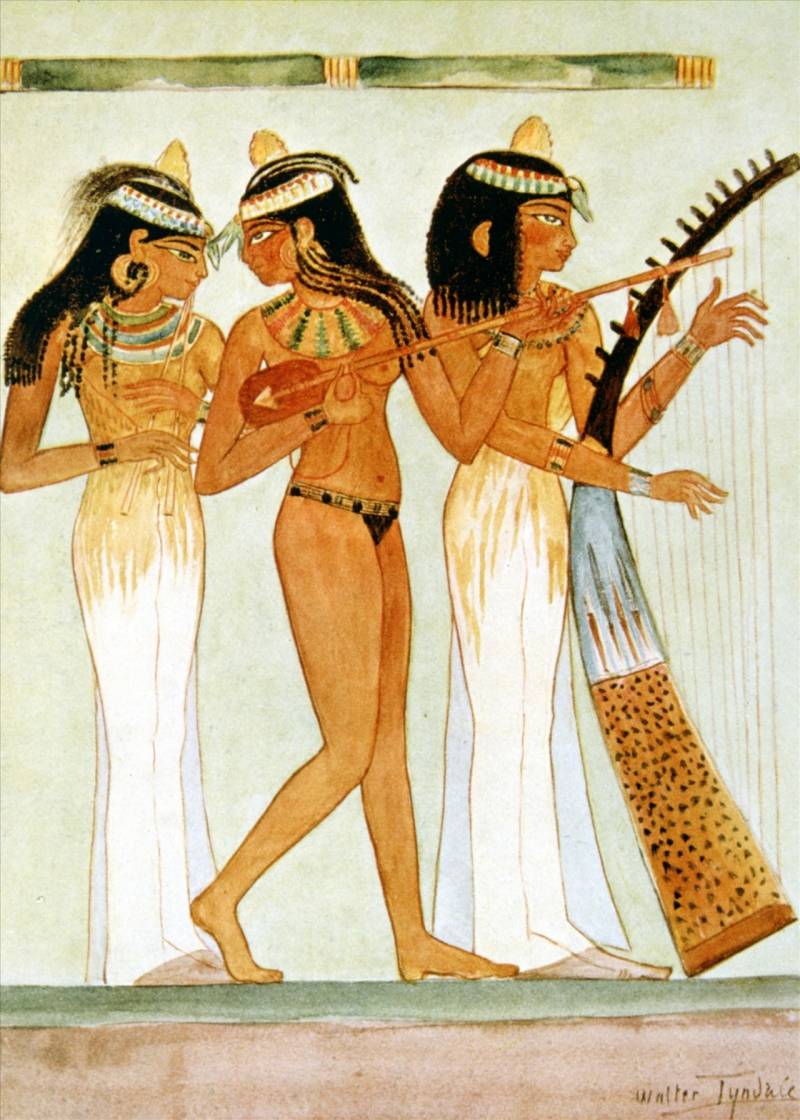 In Egypt, musicians and dancers had their own professional clothing. Reproduction of 1910 from one of the ancient Egyptian frescoes. Cairo museum
It is curious to note that the men's clothing of the ancient Egyptians was much more diverse and sophisticated than women's. You could even say that it was the fashion men who set the tone for the clothes, not the women. In all the images, from the oldest to the XVIII dynasty, we see women in identical, very simple, tight-fitting linen dresses. Fashion designers even argue whether they were cut or knitted. In any case, it was the shirt cut of the women's dress in Egypt that was the main one, the Egyptians did not know any magnificent skirts, much less crinolines. 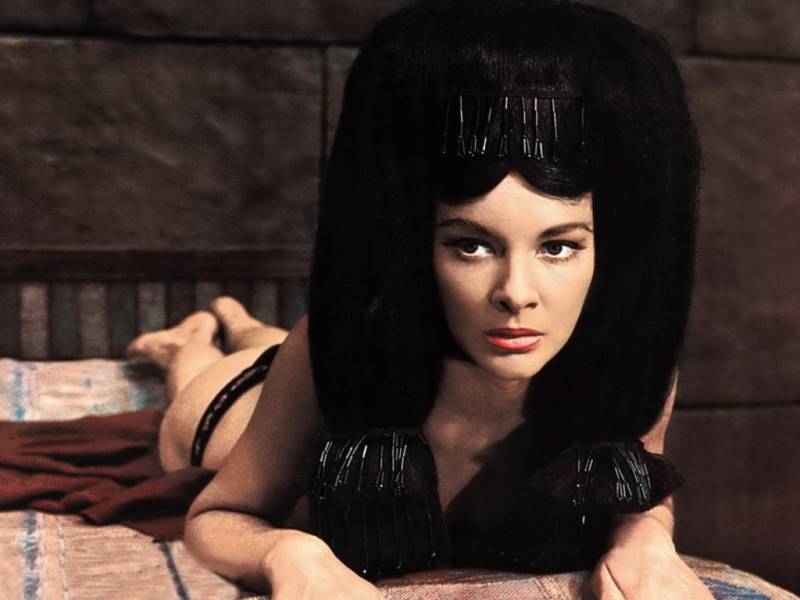 For Egyptian ladies, a wig was very important. Shot from the Polish film "Pharaoh", 1963)
But noble ladies wore long fluffy wigs, curled in curls of horsehair or sheep wool, and adorned themselves with expensive necklaces and bracelets, rings and earrings.

And another shot from the same film. The rake-pharaoh Ramses XIII abandoned his mistress Kama and decided to take up the bride of his close Thutmose named Hebron ... Pay attention to her necklace. Both women and men wore such jewelry in Egypt.
The favorite color of the Egyptians and Egyptians was white, but there were dresses of red, yellow and green. The uniformity of cut and style was partially offset by intricate straps that support the dress. Sometimes they walked in parallel, over both shoulders, sometimes they crossed or diverged at an angle. Fashionistas decorated their dresses with ornaments in the form of vertical or horizontal stripes. The cry of fashion was an ornament made in the form of colorful feathers of a bird or zigzags. 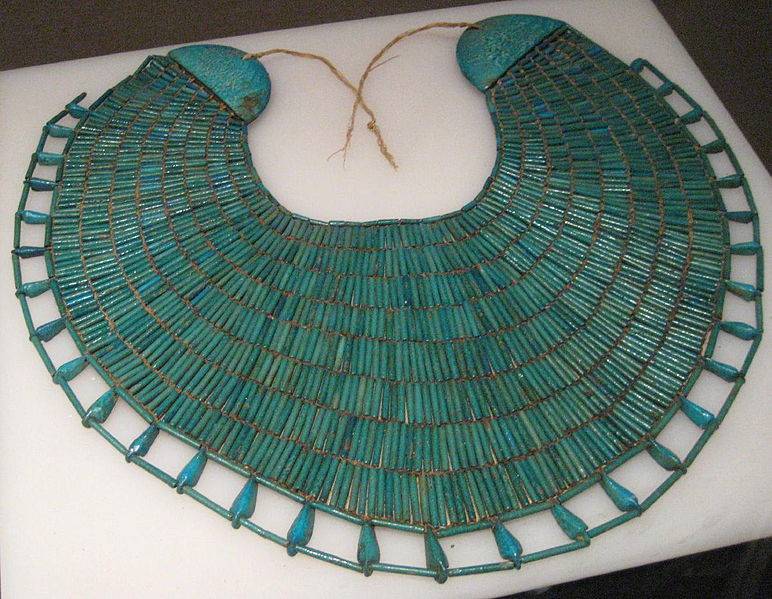 Here is one of them - a lapis lazuli necklace. Metropolitan Museum of Art, New York 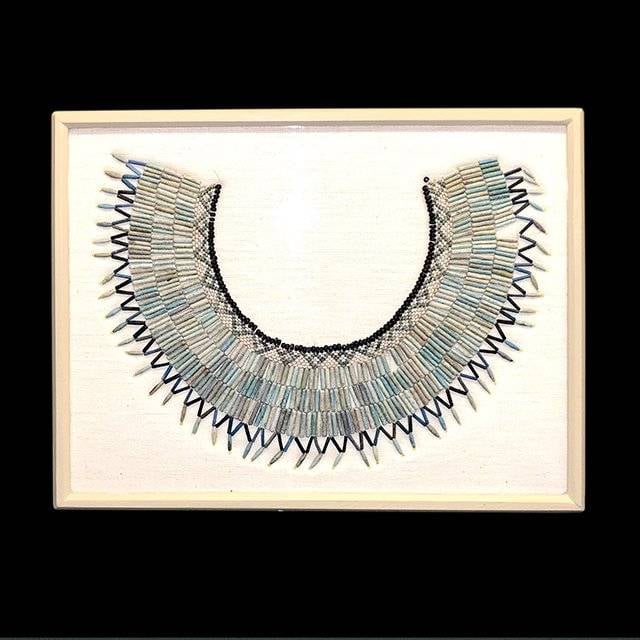 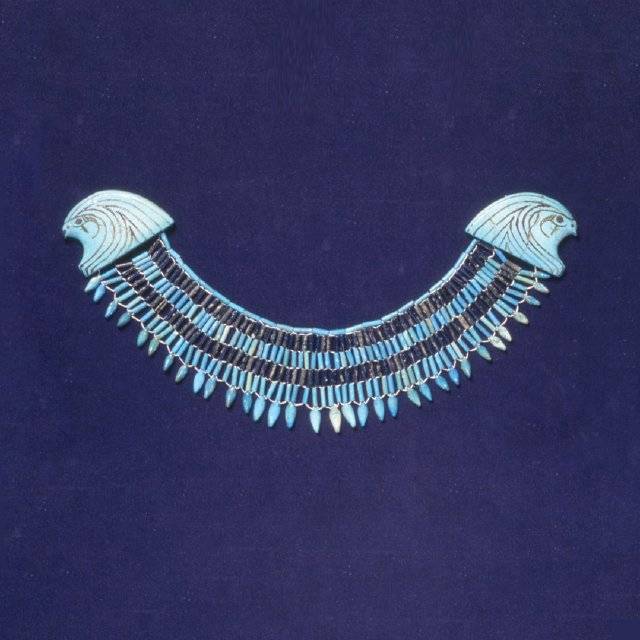 "Collar" of the Third transition period. Cairo museum
The era of the XVIII dynasty, when enormous wealth of conquered countries poured into Egypt, finally put an end to the simplicity and monotony of women's robes. Noble Egyptian ladies are addicted to lush outfits, and fashion becomes, as today, very fleeting, volatile and capricious. In countless images of this era, we see Egyptian fashionistas in beautiful dresses that fall to the floor with invariably bare right shoulder and closed left.

A sharp demarcation of the cut of dresses of noble people and ordinary people belongs to this time. Of course, long and magnificent clothes, restricting movements, were unsuitable for work, and the material for such an outfit took several times more than for an ordinary dress. 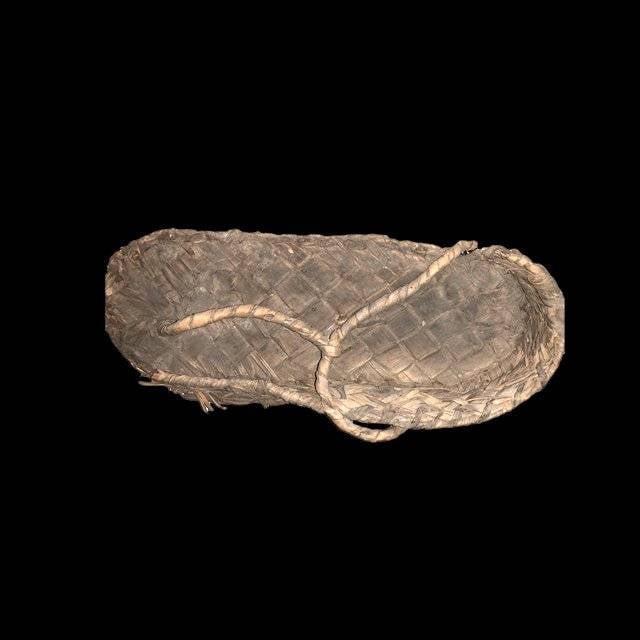 Ordinary sandals. The new kingdom. Cairo museum
The shoes were relatively simple. Both the peasants and the pharaohs. Both men and women wore sandals, which consisted of a leather sole and several straps wrapping around the foot. Subsequently, sandals with bent up socks came into fashion. 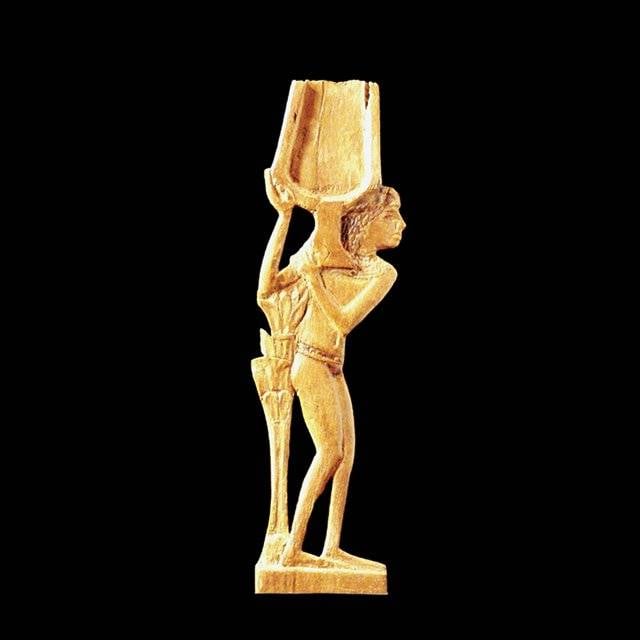 Incense spoon. Cairo museum
The invariable accessory of every rich Egyptian was elegant boxes for blush, vessels with ointments for rubbing, hand mirrors, perfume bottles, spoons for cosmetics. Egyptian jewelers gave all these products elegant forms, decorated them with images of people, animals and birds. 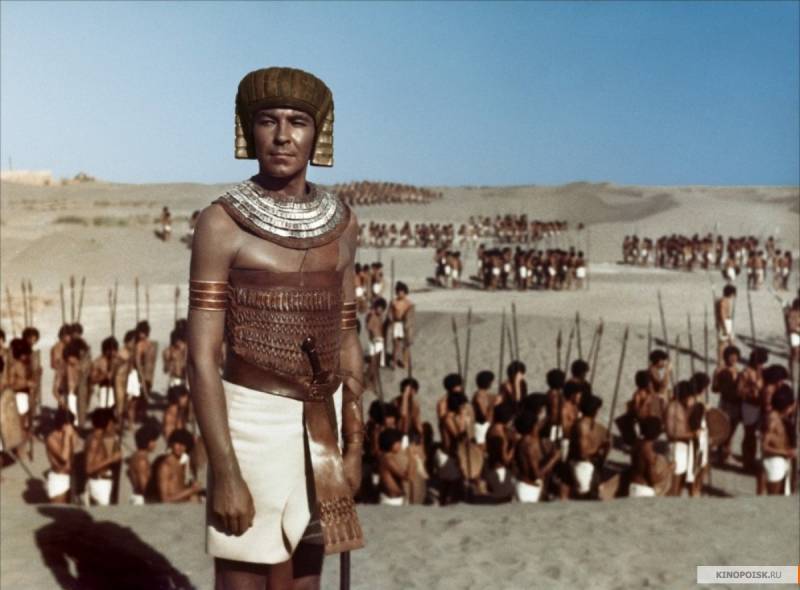 The protective clothing of the warriors of the Ancient, Middle and New Kingdom was very primitive, except that only the pharaohs or the most famous commanders wore metal scaly armor
The custom of looking around the eyes and painting the eyelids with oily paint from grated malachite also goes back to ancient times. In Egypt, both men and women did this, and there was a certain sense in it: sticky, dark paint protected eyes from dust and partially from the too bright African sun. 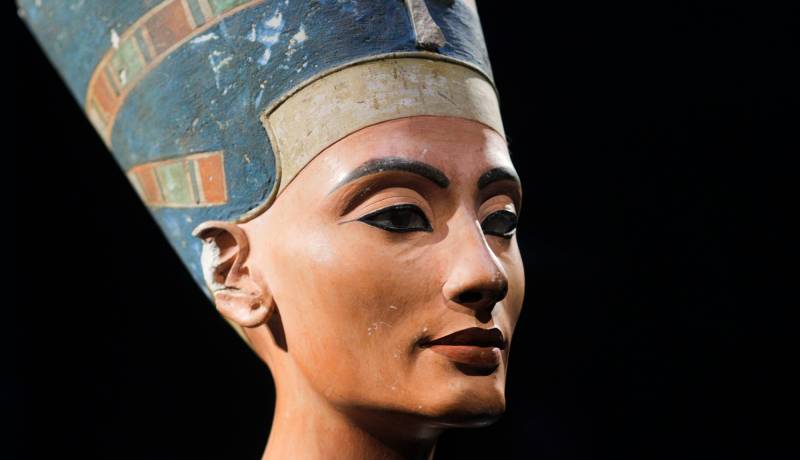 "Beautiful is coming." The legendary bust of Queen Nefertiti of the New Museum in Berlin
An original way that the Egyptians sometimes protected themselves from overheating. They attached to their heads a small fat cone made of a special thick and aromatic composition. As it melted from the sun, fragrant streams flowed from his head, which pleasantly refreshed the body.

Author:
Vyacheslav Shpakovsky
Articles from this series:
Bull skin and wooden slippers: clothes of hunters and warriors of the Stone Age

Ctrl Enter
Noticed a mistake Highlight text and press. Ctrl + Enter
We are
Chernobyl notebook. Part of 3Father told
376 comments
Information
Dear reader, to leave comments on the publication, you must to register.