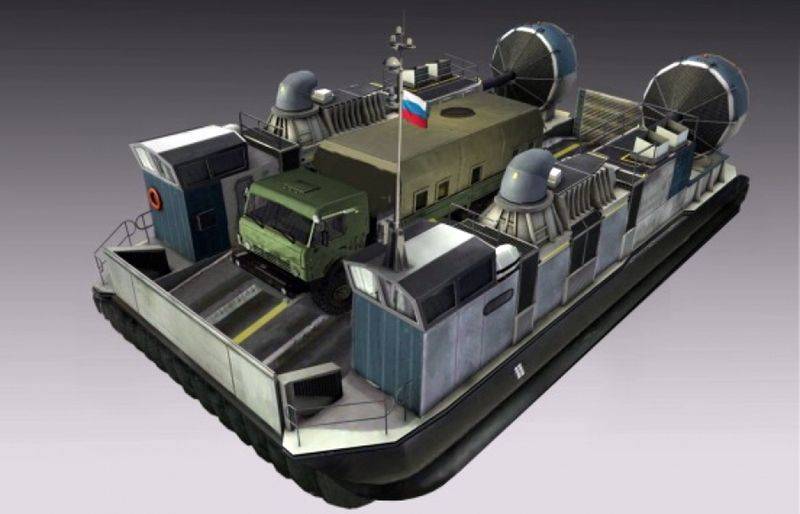 In Rybinsk, the local enterprise Rybinsk Shipyard, which has been part of the Kalashnikov group of companies since 2015, is working on a project for a new hovercraft called Haska 10. The new multifunctional vessel, designed for civilian and military use, was developed jointly with the engineers of the Vympel shipyard, which is also located in Rybinsk. The process of building the first Haska 10 hovercraft (SVP) has already begun.

What is known about the Haska 10 project

March 16, 2020 Dmitry Tarasov, who is the general director of the Kalashnikov group of companies, paid a working visit to the city of Rybinsk in the Yaroslavl Region. Here is the top manager armory the corporation was visited by the Rybinsk Shipyard; it was at this enterprise that a new ship was created under the name Haska 10. The presentation of the new vessel to the general public is planned at the end of August 2020 as part of the work of the Army 2020 international military-technical forum.

In Rybinsk, Dmitry Tarasov met with the managing director of the Vympel shipyard Vadim Sobko and the general director of the Rybinsk shipyard enterprise Sergey Antonov, both companies are now part of the Kalashnikov group of companies. During the meeting, the parties agreed on cooperation in the construction of a new hovercraft. As noted on the official website of the Kalashnikov group of companies, the Vympel Shipyard has already delivered material intended for the production of the central part of the new ship; the ship’s construction work was scheduled to begin before the end of March this year.

According to Sobko, a part of the new SVP hull will be manufactured at the Vympel shipyard, for this the company has trained personnel and all the necessary production capacities. At the same time, work will be carried out jointly with the Rybinsk Shipyard in the framework of establishing cooperation of the local shipbuilding cluster. The joint work of the two enterprises will help accelerate the construction of a multifunctional skeg type hovercraft with flexible skegs (SVPSG) Haska 10 with a maximum payload capacity of 10 tons. 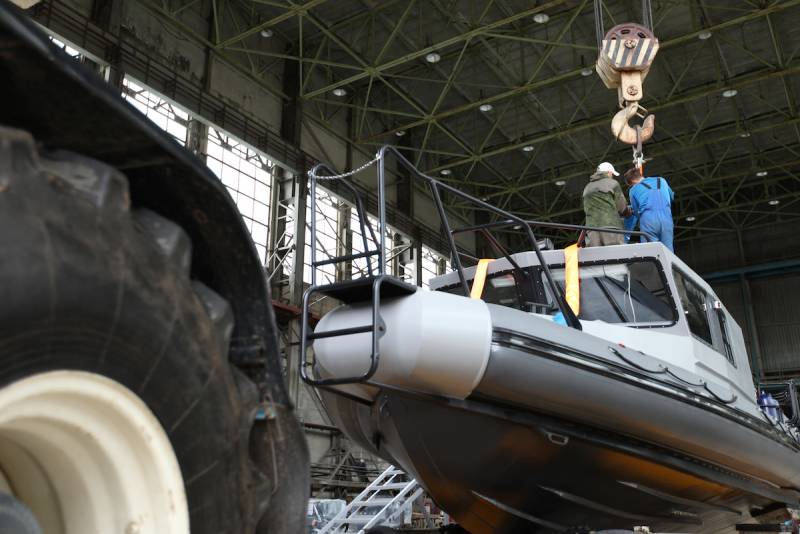 Rybinsk Shipyard
Work on the new vessel is being carried out as part of the state program "Development of shipbuilding and technology for the development of offshore fields for 2013-2030." It is known that the design and development department of the Rybinsk Shipyard enterprise began implementing the Haska 10 project in January 2018, at which time the first renderings of the future ship appeared on the network. The project is positioned as an economical universal transport vessel for military and civilian use. Obviously, the demand for the SVPSG may not only be on the civilian market, but also on the part of Russian law enforcement agencies.

According to the materials already published, it is clear that the ship will be able to take up to ten tons of various cargo on board and will easily accommodate the KamAZ three-axle truck. The design length of Husky 10 is 20,8 meters, width - 12,5 meters, height - 7,4 meters. Full displacement - 35,7 tons, empty - 20 tons. It is assumed that they will equip the hovercraft with two Russian engines developing a maximum power of 800 hp. every. Such a power plant will be enough to provide the ship with a maximum speed of 40 knots (approximately 73 km / h). The crew of the ship will be three people, declared autonomy - 3 days. Cruising range - 400 miles (740 km).

The main feature of the project being implemented in Rybinsk is flexible skegs. Most often, skeg vessels are hovercraft, in which the hull does not completely detach from the surface of the water, and the side fences (skegs) themselves go into the water. To give the whole structure more stability, such fences are most often made rigid. However, the Haska 10 project implemented another technical solution - flexible skegs. Designers believe that this will improve the technical characteristics of the vessel. Such a solution should increase the seaworthiness and maneuverability of the vessel by eliminating spasmodic overcoming of the incident wave or various obstacles.

The general director of the Kalashnikov group of companies Dmitry Tarasov has already called the Haska 10 vessel the most promising product of the corporation for future exports. It is reported that the hovercraft has already managed to interest the partners of the concern from Vietnam, India and Kazakhstan. Promising for the HPSK “Haska 10” is also considered the domestic Russian market. It is planned that the vessels of this project will be in demand in the transport system of remote Russian regions, primarily in the regions of the Arctic, Siberia, and the Far East. Also, ships can be effectively used in the Baltic and on the rivers of the Volga-Kama region. 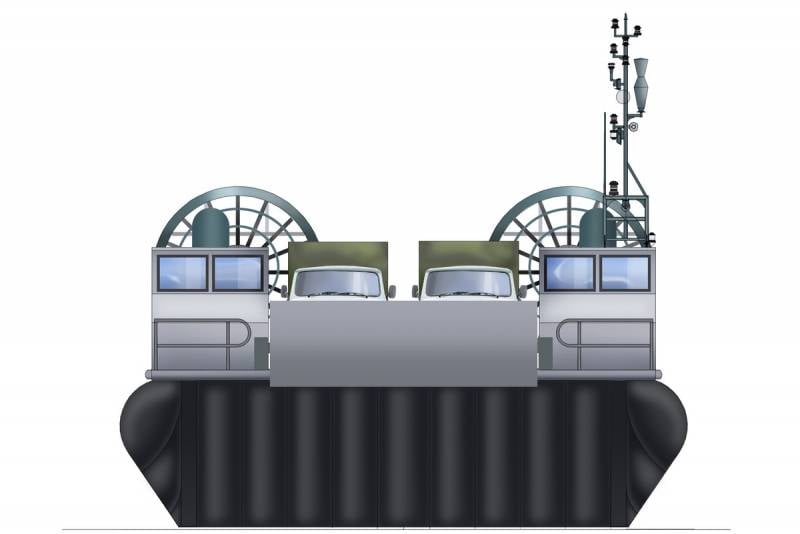 Prospects for the hovercraft market in Russia

Considering the size of the territory of the Russian Federation and the presence of huge remote areas, including those with difficult terrain for conventional vehicles, the development and construction of hovercraft seems justified. However, experts are not sure that civilian versions of hovercraft will have private buyers. Most likely, these will be large state-owned companies or departments.

In 2016, the Hovernetik company, which intends to organize in St. Petersburg the production of SVPs intended primarily for the private consumer, estimated the entire market of Russian amphibious funds for the next decade at 45 billion rubles. At the same time, according to company estimates, in the country there were approximately three thousand hovercraft.

The use of such vessels in Russia is justified, especially to improve the transport accessibility of the regions of Siberia, the Far East and the Arctic zone. Such vessels can be actively used on rivers for the rapid transport of people and goods, as well as in the coastal strip. Vessels can deliver new construction and drilling equipment, construction materials, wheeled and tracked vehicles within the framework of the available load capacity. This fits well with the ongoing state program “Development of shipbuilding and equipment for the development of offshore fields for 2013-2030”. It just so happened that the main wealth of the country, which is represented by natural resources, is concentrated today in inaccessible regions, where there is practically no transport infrastructure, and rivers are replaced by highways. At the same time, hovercraft can be used to deliver goods to remote locations and for passenger traffic. 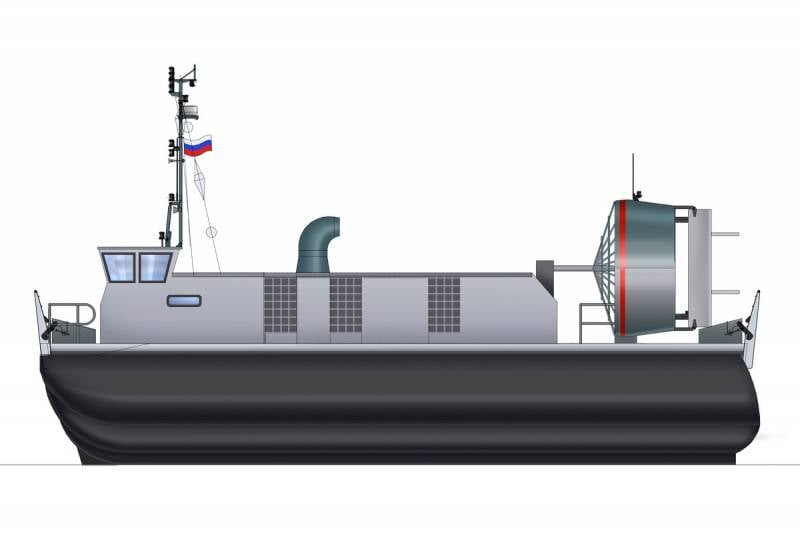 Husky 10
True, the future of the HKSK 10 Haska 10 lies precisely in the plane of government procurement. Most likely, only large state-owned companies, primarily those involved in oil and gas production, will be able to afford such vessels with a carrying capacity of up to 15 tons. It is also possible to purchase them for some departments, for example, the Ministry of Emergencies. At the same time, it is still difficult to believe that non-state companies will be interested in such a proposal. In Russia, private customers of hovercraft, primarily small boats capable of transporting up to a ton of cargo, account for only XNUMX percent of sales. It is no coincidence that many experts believe that in addition to state-owned companies, the Ministry of Defense and the Ministry of Emergencies will remain the main customers of such equipment in Russia for many years to come.

In any case, the demand for such equipment in the near future will be determined by the development of the Far North, the coast and shelf of the Russian Arctic. This is directly related to the industrial development program for the inaccessible northern and eastern regions of Russia, in which huge natural resources and the largest deposits of natural resources are concentrated, all this must be protected. Therefore, in these areas the military presence of Russia is growing and the number of military bases, airfields, border outposts, radar stations and air defense systems, which also need to be equipped with everything necessary from the mainland, is increasing.

Already, it can be assumed that the Haska 10 will become one of the customers of the skeg type hovercraft with flexible skegs (SVPSG) of the Russian Ministry of Defense. Outwardly, the new Russian development resembles a smaller version of the American LCAC hovercraft. Such boats are actively used by amphibious forces of the United States for the transport of marine corps, various equipment, military equipment and military cargo from aboard landing ships to shore. Also, the vessel can be effectively used for humanitarian operations. LCAC's American hovercraft landing boats are heavily used by UDCs. 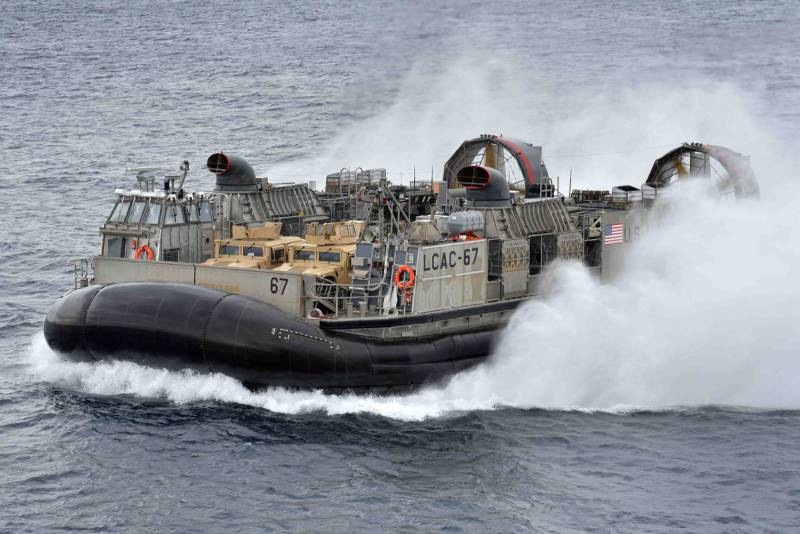 American hovercraft LCAC
It is quite possible that the Haska 10 will also become a similar vessel for future projects of domestic universal landing ships, if there is money left in the Russian budget for their design and construction. True, the capabilities of the Husky 10 will be limited, the ship will only be suitable for transporting armored vehicles (such as the Tiger), unarmored wheeled vehicles, guns, mortars, marines, various military equipment and equipment, which in itself is not so small.

We are in Yandex Zen
Coastal Warships: Modern Approach
"Svetlana". History of creation
50 comments
Information
Dear reader, to leave comments on the publication, you must to register.