India: Modernization of the Su-30MKI will turn the fighter into the basis of the Air Force 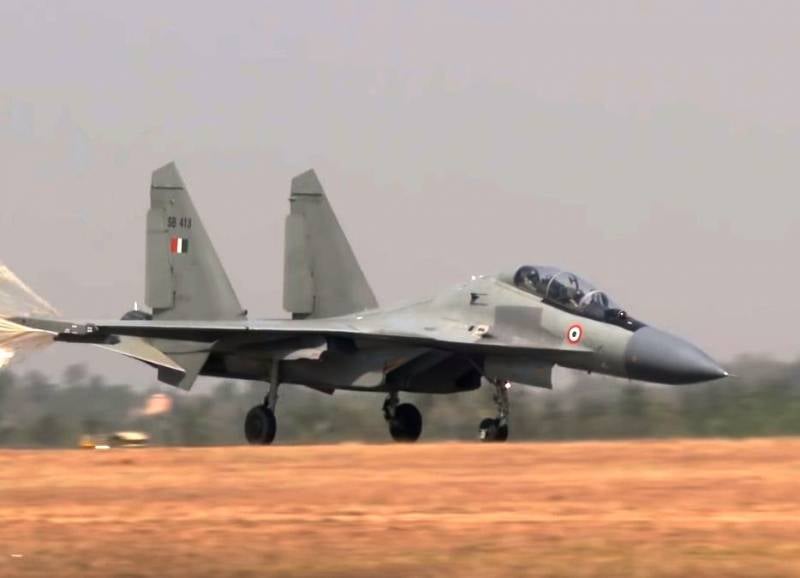 India is rapidly increasing and modernizing its fleet of Su-30MKI multipurpose fighters. Thus, HAL expects further orders from the Indian Air Force to re-equip the Su-30MKI.


Hindustan Aeronautics Limited is one of the largest Indian aircraft manufacturing companies, assembling the Su-30MKI under the license of the Russian United Aircraft Corporation. The total number of Su-30MKIs, which, under an agreement with Russia, were assembled or are being assembled in India - 272 aircraft. Fulfillment of the task of re-equipping fighters should increase their combat power and turn the Su-30MKI into the basis of the Indian Air Force.

Recently, HAL applied to the Indian Ministry of Defense for permission to build 72 Su-30MKI aircraft at its plant in Nashik, Maharashtra. The cost of the order is about $ 5 billion, and one plane costs about $ 70 million.

Now the HAL is awaiting additional orders from the Indian Air Force and is counting on 2020-2021. get expensive contracts again. After all, in 2019-2020. the company had a record turnover of $ 3 billion. There is no doubt that in the foreseeable future, the company will receive orders from the Indian Air Force. After all, the Su-30MKI is one of the main aircraft used in the Indian military aviation.

At present, the Indian Air Force includes 32 Su-30MKI squadrons, while the Air Force command speaks of the need for 42 squadrons to counter the double threats from both Pakistan and China. Each Indian Air Force squadron has 18-20 fighters in its composition, all in all, there are currently 260 Su-30MKI aircraft in Indian aviation.

Not so long ago, a Su-30MKI squadron equipped with Bramos supersonic cruise missiles was deployed in Thanjavur in southern India. This unit is tasked with protecting the interests of India in the Indian Ocean region. In addition, to counter possible threats from Pakistan and China, the Su-30MKI squadrons are deployed in Jodhpur (Rajasthan), Bareili (Uttar Pradesh), Sirs (Haryana), Tezpur (Assam), Chabua (Assam), Pune (Maharashtra) and Halvare (Punjab).

As you can see, the squadrons are deployed in the north-west (states of Punjab, Rajasthan, Haryana) direction - to counter Pakistan, and in the north and north-east directions (Uttar Pradesh and Assam) to counter China. 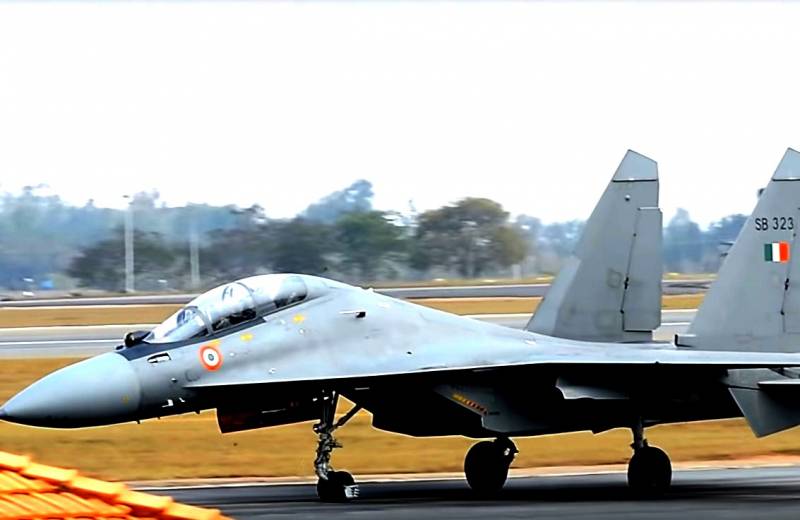 The Su-30MKI aircraft is capable of performing many functions - from air strike battles to strategic bombing. It is suitable for flying in any weather and at any time of the day, can strike on land and at sea, day and night. Now India plans to equip the main aircraft of its Air Force with a multi-mode, hybrid passive with electronic scanning array of the Russian-made Irbis-E radar system.

It is assumed that fighters equipped with Irbis-E radars will be able to exchange data from their sensors. This will significantly increase their situational awareness, which will destroy the enemy invisible fighters. Also, the radar will be resistant to interference created by the enemy’s electronic warfare.

In addition, the Air Force command expects to install an AL-31FS (Saturn) engine on planes, which has more power and a longer service life than the AL-31FP currently in use. The new engine will increase the endurance of aircraft, as well as increase their capabilities in terms of transporting heavy loads and installing additional weapons.

It is planned to equip Su-30MKI aircraft with R-37M missiles, which have a greater range than the R-77 and R-27 variants. The Indian Air Force command believes that these missiles will definitely give the advantage of Indian aviation over Pakistani and Chinese aircraft.

With the help of the Irbis-E system, the Indian Air Force will also receive great opportunities for using the R-37 at ranges of up to 400 km. The new radar will increase the effectiveness of missiles against the radar systems of the airborne early warning and control system.

It is also planned to deploy air-to-air missiles K-77 with a short range of 200 km, but with a missile radar that can detect enemy fighters. In addition, India is continuing negotiations with Russia on the development of a more modern and advanced version of the Bramos missiles, which have great performance in terms of speed and maneuverability. In India, in general, it is believed that hypersonic complexes can be created on the basis of available versions.

Thus, the Su-30MKI aircraft, as is believed in India, will become the basis of the striking power of the Indian Air Force. The Su-30MKI fleet will comprise 260 aircraft already in service, and another 240 aircraft in production.

Finally, the fighter power of the Indian Air Force will be greatly enhanced by the French-made Rafale fighters, which will begin to operate together with the Su-30MKI. Military experts believe that such a combination will be deadly for opponents of the Indian state and will ensure the unambiguous safety of Indian airspace.

Ctrl Enter
Noticed a mistake Highlight text and press. Ctrl + Enter
We are
In India, fear of dismissal after the end of the assembly program Su-30MKIIndicated price is the Tejas Mark I for the Indian Air Force
23 comments
Information
Dear reader, to leave comments on the publication, you must to register.