April 2 2020
14
On the 75th anniversary of the Victory in World War II, the TV channelHistory"Conducts a nationwide campaign-competition" I am proud. " Everyone can take a video and send a video to the contest about why he is proud of his great-grandfather, grandfather or someone close to them who participated in the Great Patriotic War. This is a story of a feat that is stored in every Russian family. You can familiarize yourself with the rules of the contest, as well as send your work on the site lagor.rf


Today we recall one of the key events of the winter of 1945. At this time, the Red Army was already conducting hostilities in Germany. Remained a few months before the fall of the Nazi Reich. What will happen to Europe after the war? The leaders of the allied powers - the United States, Great Britain and the USSR - increasingly thought about this. At this time, in the strictest secrecy, their next meeting was being prepared for half a year. This time in Yalta. It was she who was supposed to decide the future of the post-war world. 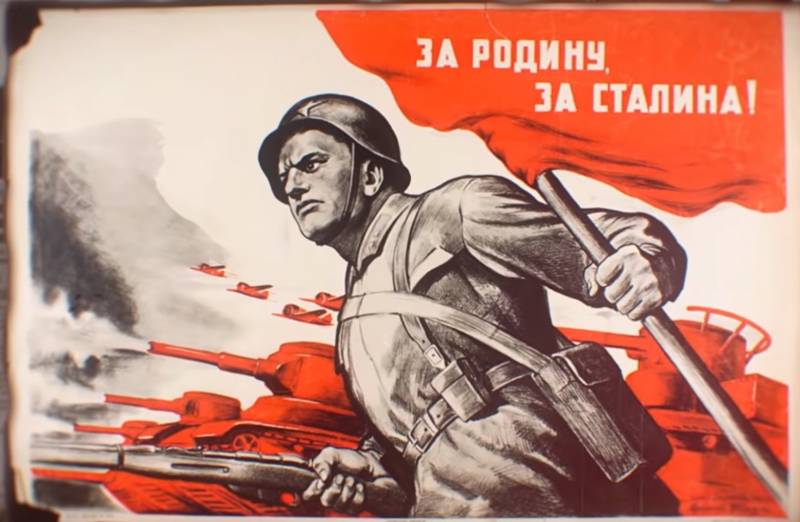 On June 6, 1944, the largest landing operation in world history began. Seven thousand combat and transport ships approached the shores of France occupied by the Germans. British circled the English Channel aviation. The operation, codenamed Neptune, began on the night of June 6th. 156 thousand soldiers landed and 24 thousand paratroopers were abandoned. On earth, the Seventh Wehrmacht army, armed to the teeth, was waiting for them, meeting the military with machine-gun fire. The commander of the 1st American Army, General Bradley, was preparing to give an order to retreat. Only the next day, June 7, a separate group of paratroopers still managed to capture the coastal strip. Thus began the liberation of northern France.

The landing in Normandy was the first stage of the strategic operation Overlord. By the end of July, a deep bridgehead on the coast was captured, and on August 25 Paris was liberated. German troops retreated from northern France and took up defense on Siegfried’s fortified line in Belgium. Here the allies are bogged down in heavy battles. The offensive was stopped for almost 4 months. December 16, 1944 German troops went on the offensive in the Ardennes. Subsequently, he will be called the desperate attack. The Germans threw their last forces into battle, in just a week they broke through the Allied front and pushed them 90 kilometers away. Several American divisions were defeated. The very existence of the Western Front was threatened. At this point, Churchill, stepping over self-esteem, writes a letter to Stalin with a request to expedite the timing of the offensive.

In January 1945, the Red Army liberated most of eastern Poland and stood on the outskirts of Warsaw. There was a regrouping of troops and replenishment of reserves. Further advancement of troops was scheduled for January 20. Having received a telegram from Churchill, Stalin gave the order to launch the offensive a week earlier. The operation to force the Vistula and Oder involved more than two million soldiers. In 20 days, the army covered 500 kilometers. To stop the Russians, Hitler gave the order to urgently transfer several fresh divisions from Ardennes to the east. Two weeks later, they managed to surround 300 thousand German soldiers. So, thanks to the Red Army, the western front was saved.

In London and Washington, they watched with alarm the successes of the Red Army. The Allies were afraid of losing control of Eastern Europe. It was urgent to agree with Stalin on the post-war world. In the summer of 1944, British Prime Minister Winston Churchill and US President Franklin Roosevelt persistently invited Stalin to come to a peace conference. Churchill proposed calling this meeting the code word “Operation Argonaut”.

Meeting place can not be Changed

The leaders of the allied powers arrived in Yalta on February 3, 1945. On this day, the sky over the Crimea was guarded by 160 Soviet fighters. Especially for delegates from the USA, new cars were delivered to the Crimea - an armored Lincoln, two Cadillacs and 20 Chevrolet sedans, which Roosevelt presented to the Soviet Union.

The Crimean peninsula was in German occupation for 865 days. The Nazis destroyed the entire industry of Crimea, cut down old vineyards, plundered and burned most of the museums, libraries and palaces, blew up the oldest Simeiz astronomical observatory in Russia. During the occupation, the Germans exterminated over 200 thousand civilians in Crimea. Many were killed with particular cruelty. In one of the hospitals in Simferopol, the Nazi surgeon Oscar Schulz opened a laboratory where he studied the effects of poisons on living people and removed their internal organs. After the liberation of the city, 10 thousand corpses were found on the territory of this hospital - victims of monstrous experiments. Roosevelt Stalin wanted to show what the Nazis did in the Soviet Union, he really wanted the Americans to see how much the price of victory for our waxes came.

The peace conference in Yalta was kept in strict confidence until the last moment. Journalists were not even allowed into the Crimea, only a few military cameraman were present. Joseph Stalin, together with the Soviet delegation, arrived in Crimea by train three days before the arrival of the Allies. February 4, he first met with leaders of the Allied Powers. At 5 pm, delegations gathered at the negotiating table in the Livadia Palace. Stalin unexpectedly asked Roosevelt to open the conference and be its chairman. Negotiations in Yalta became the only case in world history when the future of Europe and the entire planet depended entirely on only three states - the USSR, the USA and Great Britain.

The conference in Yalta took place 7 days - from February 4 to 11. The first working meeting was held on the morning of February 5. On the agenda was the question of dividing Germany into zones of occupation. The country was supposed to distinguish three zones, the borders of which should correspond to the position of the allied armies. It was a temporary solution to restore order.

The French army was defeated by the Wehrmacht in 1940 in just three weeks. However, Churchill demanded that the French allocate their own occupation zone. Stalin did not mind. The fate of Germany did not bother the Soviet leader. The reparations were much more interesting to him. So called payments for damage caused by the war. The USSR lost a third of national wealth. Enormous funds were needed for restoration, which at that moment was simply not in the country. Churchill accepted Stalin's arguments, but hoped to seize the initiative in the negotiations. Ahead was the main question of the entire conference - the fate of post-war Poland. In the 30s of the 20th century, the Polish Republic was the main ally of Britain in Eastern Europe. In 1939, Poland refused to let parts of the Red Army through its territory to the German border. In September, in just two weeks, the country was occupied by the Wehrmacht. The Polish government fled and soon settled in London. From there, it led the Craiova Army, the largest partisan movement in occupied Poland.

Poland was liberated by the Red Army on the eve of the Yalta meeting - February 3, 1945. By this time, a new provisional government of the Polish Republic was created in the city of Lublin. He was not recognized in the West. The Polish government in exile stated that the Lublin Committee was subordinate to Stalin. Stalin, Churchill and Roosevelt had to decide who would be part of the government of liberated Poland. The speech was held by Winston Churchill. He said that the whole civilized world is looking at Poland and expects that free and democratic elections will be held in it. The British Prime Minister added that he would never compromise the interests of the Poles, because for him it is a matter of honor. In response, Stalin noted that the people who shoot Red Army soldiers in the back cannot again head the Polish state. Intense discussions also flared up around the new state borders of post-war Poland. In negotiations with Stalin, Roosevelt proposed to restore the border along the Curzon line, but at the same time leave Poland Lviv and expand its territory to include land in southern Ukraine. Stalin didn’t and couldn’t take such a generous gesture. He proposed to give part of East Prussia to the Poles, and to return the original Belarusian and Ukrainian lands to the Soviet Union.

Winston Churchill for a long time led a double political game. Four months before Yalta, in October 1944, the British prime minister specially arrived in Moscow to finally solve the Polish question. Churchill agreed to fulfill all the requirements of Stalin regarding Poland, if he allowed him to maintain control over Greece, which connected Britain with its eastern colonies. By February 8, the Yalta talks on Poland had reached an impasse. Franklin Roosevelt decided to speak in private with Stalin. He proposed to compromise - to declare that all non-fascist parties will be able to participate in future elections to the Polish Sejm. Stalin agreed with this formulation. In exchange, the Allies accepted Stalin's proposal for new Polish borders. In the West, this decision was perceived ambiguously. In London and Washington, there were many people who accused Roosevelt of excessive compliance.

Stalin promised Roosevelt to enter the war with Japan 2-3 months after the surrender of Germany. After the war, cooperation between the USSR and the USA was to continue within the framework of a new global structure - the United Nations Organization. The author of this idea, Franklin Roosevelt, proposed to bring together representatives of the largest countries in the world who together can solve the problems of economics, politics, war and peace together. Stalin immediately supported this plan, and Churchill reacted to it with demonstrative indifference. Even within the UN, he did not see any prospects for cooperation with the USSR.

On February 10, leaders of the allied powers gathered in the courtyard of the Livadia Palace. In front of the lenses of the photo and movie cameras, they smiled and shook hands with each other. Stalin managed to defend the interests of the USSR in Eastern Europe and achieve reparations. Roosevelt lived in the hope of an early end to the war and the beginning of a new era of international relations. But Churchill could not achieve all the goals. It was already impossible to limit the influence of the United States and the Soviet Union on world politics.

On April 9, 1945, just two months after Yalta, President Roosevelt died suddenly. His successor was Senator Harry Truman, a tough and self-confident politician, whose worldview was compared by the Americans "with the horizons of a company commander." Almost immediately, Truman turned off all the initiatives of his predecessor, heading for the containment of the Soviet Union. Churchill warmly supported the new American colleague.

On August 6, 1945, the Americans dropped an atomic bomb on Hiroshima. This was the first ever combat use of nuclear weapons. A few months later, in the secret directives of the American special services, 20 Soviet cities were indicated for a possible nuclear attack. The development of nuclear weapons was carried out in the United States throughout the war, but this was carefully hidden from the USSR.

Just two years after Yalta, a confrontation began in the world, which today is called the Cold War. This period lasted more than forty years. During this time, several times our planet could be destroyed during a nuclear war. The ideological confrontation of the two great powers almost erased from our memory the era when Russians and Americans thought together about the future of the world, about the time when the USSR and the USA could make our planet better and safer. Perhaps this is precisely what Franklin Roosevelt was thinking when he left Crimea. After his departure, the last hope for the peaceful existence of peoples also disappeared.

Ctrl Enter
Noticed a mistake Highlight text and press. Ctrl + Enter
We are
RetributionTank "Panther"
14 comments
Information
Dear reader, to leave comments on the publication, you must to register.