Over the mountains of Afghanistan

Our pilots had to fly along long and difficult routes at the very dawn of the formation of the Soviet aviation. Barely young Soviet Russia launched its first truly massive R-1 aircraft (actually a copy of the British De Haviland), when customers were found on it.

Once again, in 1924, internal problems flared up in Afghanistan - the Pashtuns revolted. The king urgently needed to strengthen aviation, and the Afghans bought 6 R-1 biplanes in the USSR to storm the enemy cavalry.

The problem was delivery - it was impossible to dismantle the planes and send them by ground, because it was controlled by the rebellious Pashtuns. But aviation was required immediately. Moscow was interested in keeping the king on the throne and gave the green light to a flight that was difficult and full of dangers.

It was to fly out of Tashkent. The last Soviet settlement on the way was Termez, an Uzbek city on the border with Afghanistan. It was necessary to deliver the R-1 to the capital Kabul, but it was impossible to fly in a straight line - the 6500-meter mountains left no chance for a biplane, which was not designed for 5-kilometer altitudes. As a result, the "Afghan" roundabout took about 450 kilometers - it was also the most difficult.

The best pilots of the Turkestan front were selected for business. The flight was headed by Pyotr Mezheraup - the chief of the air forces of the front, an experienced pilot who knew the conditions of Central Asia.

On September 29, planes took off from Tashkent - 850 kilometers were covered with two landings for refueling without incident. Having slept in Termez, Soviet pilots took off in the early morning of the next day.

Flying between the mountains in the wild, orienting on a map, a compass and rare settlements by the standards of aviation in the mid-20s was a real hell. Everyone understood this, therefore, additional tanks were put on the planes, and two emergency platforms with gasoline were equipped along the way. But all this was not needed - all six R-1s successfully completed the most difficult route, reaching Kabul in less than 4 hours.

Adventures of the "Country of the Soviets"

The TB-1 aircraft created in the USSR became the world's first twin-engine bomber. But it was used not only in military exercises and as a transporter. In the summer and autumn of 1929, this aircraft was to conquer America, and with it half of the globe.

To impress the world, the Russians conceived a grandiose flight of more than 20 thousand kilometers. They decided to fly from Moscow to New York, but not along the shortest route, but, on the contrary, through all of Eurasia, the Pacific Ocean and the USA. It was supposed 23 landings to replenish fuel reserves and other consumables. 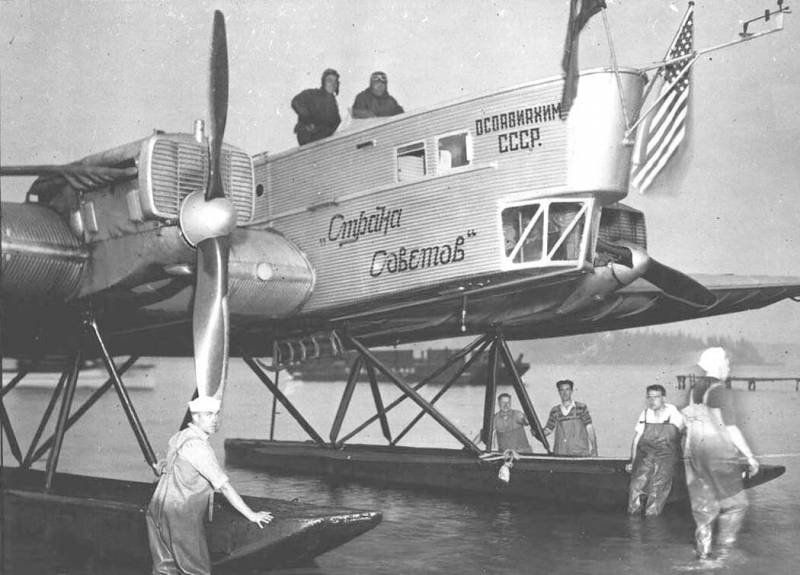 "Country of the Soviets"
Two TB-1s were prepared for the flight - the main and the spare. A proud name was inscribed on board the aircraft: "Land of the Soviets." But the crew of four, headed by the pilot Shestakov, almost failed the whole thing - flying Baikal, the aviators were lost, and, not finding the Chita airfield, they forced to land in the taiga, breaking the plane.

But, since they had already prepared a spare, on August 23, 1929 they went on a second attempt. This time, despite the difficult route, full of fogs and difficulties of orientation, everything went well. September 3, "Country of Soviets" reached Khabarovsk. Then - Nikolaevsk-on-Amur, where the chassis was changed to floats. And - go ahead, conquer the Pacific Ocean.

It was only possible to overcome it by October 13 — that was when the “Land of the Soviets” landed in Seattle. Why so long? They were waiting for the flight weather - it is worth remembering that the twenties were still standing in the yard, and the means of orientation in aviation were not so perfect.

On November 1, 1929, the pilots triumphantly completed their flight, landing in New York.

To the roof of the world

By 1937, humanity was already reaching the North Pole by air. But to bring a group of heavy planes there, put them on ice, unload heavy and bulky equipment, and then fly back in an organized manner - such world aviation did not know yet.

But this was precisely what was to be done in order to carry out a project unprecedented at the time - a scientific polar station on a drifting ice floe. So that the famous “Quartet of Papanin” could usefully spend its 274 days of research, it was necessary to deliver 10 tons of cargo.

It could well be pulled by the hefty four-engine TB-3 bombers. But rushing to the ice headlong was unreasonable. Therefore, a year earlier, in the spring of 1936, they decided to conduct reconnaissance of places for intermediate bases. This was done by 2 R-5 aircraft, led by pilot Vodopyanov. 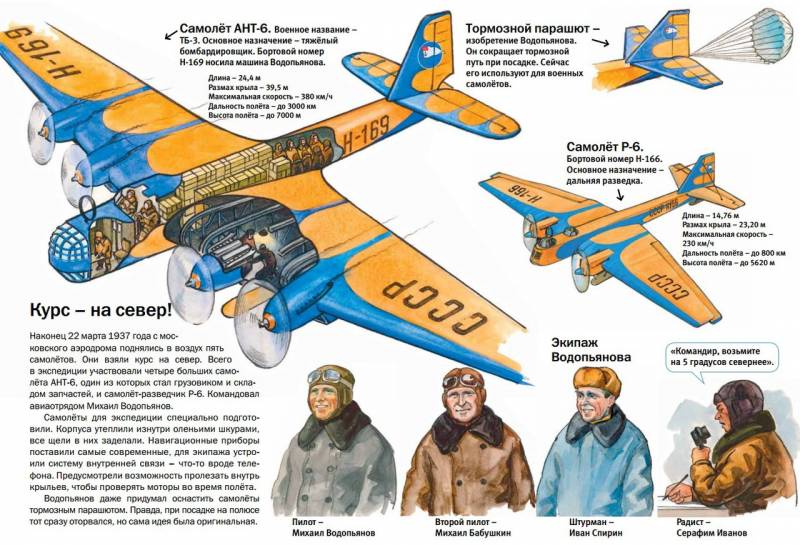 Converted to Arctic conditions TB-3
Having received the results, they began planning an expedition to the Northern Sea Route. Having calculated the volume and nomenclature of goods, having decided on the research program, we began to wait for the optimal time for the start.

In March 1937, 6 aircraft flew to the pole - 4 to the top loaded with TB-3 and reconnaissance R-5 and ANT-7. Due to the expectation of flying weather, the planes reached the pole only at the end of May, and not all at once - the latter arrived in early June.

But it was not important, the main thing is that the flight itself, despite the most difficult conditions, passed without serious losses. Having deployed the tent camp of the Papanin expedition and unloading everything necessary from the planes, the polar pilots flew back to the mainland.

It was possible to fly to America steeper than in 1929 only by doing it non-stop (which was not a novelty in the world) and through the North Pole (but this was already considered an achievement). And with the advent in 1933 of the ANT-25 aircraft created for the range records, this became possible.

True, the first attempt in 1935 ended in a tremendous failure. No, the plane did not crash, but just turned back - a technical defect was discovered. But, firstly, they already managed to trumpet about the upcoming flight, and it turned out ugly. And, secondly, the pilot who headed the flight, Levanevsky quarreled with the designer ANT-25 Tupolev, accusing him of wrecking in the presence of Stalin and refusing to continue to fly on aircraft of his design. 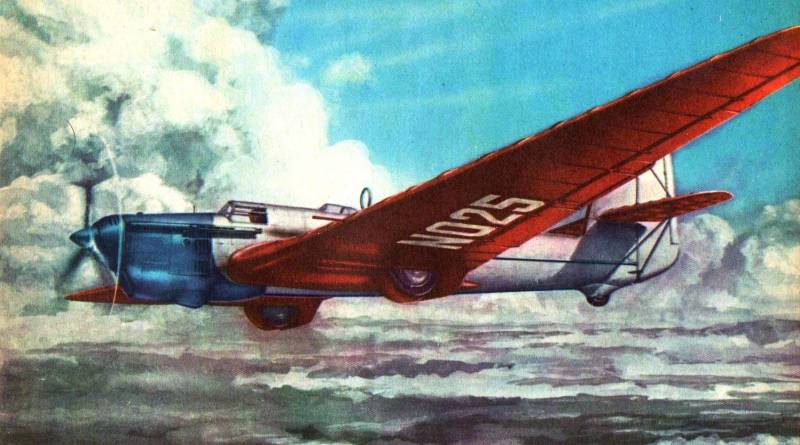 ANT-25
Therefore, when a second attempt was made in July 1936, I had to be careful — not the pole, nor America, nor loud statements. Just a flight from Moscow to the Far East, led by the new first pilot, Valery Chkalov.

The flight ended in success - well, except for the fact that due to bad weather the car had to be planted not in Khabarovsk, as planned, but on the island of Udd in the Gulf of Happiness - hundreds of kilometers from the original version. The landing turned out to be extremely difficult - there were boulders everywhere, but Chkalov managed not to break the car.

As a result, Stalin gave the go-ahead for flying to America through the North Pole.

In the summer of 1937, 25 crews, Chkalov and Gromov, immediately flew to America on the ANT-2. If the first for a successful flight through the entire Union had the honor of becoming the first, then they expected efficiency from Gromov - since he was the one who tested the ANT-25 back in 1933 and knew the car perfectly. Yes, and in general was a rare neat.

And so it happened - Chkalov’s crew flew to America. But not without adventure, almost suffocating at high altitudes from the fact that the oxygen in the cylinders began to end earlier than expected. And the Chkalovites did not reach the initial final point of the route in San Francisco. 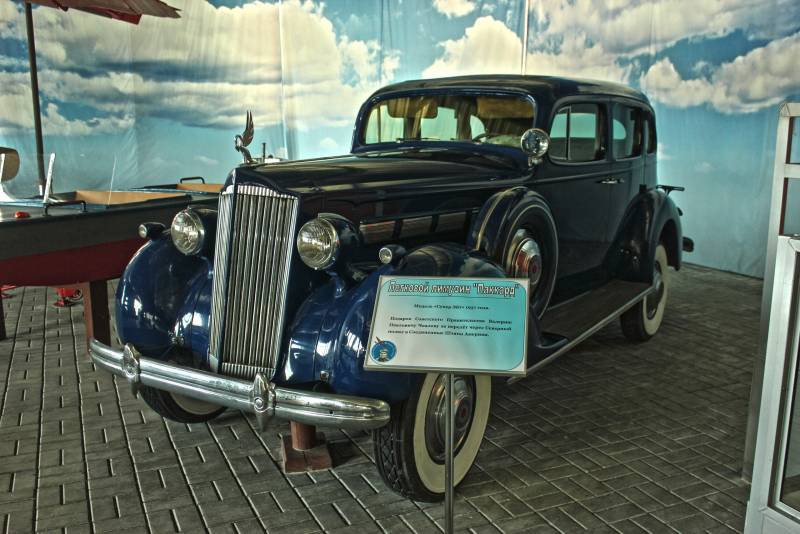 Chkalovsky "Packard", bought in America
But Gromov did everything perfectly - a careful calculation of the route, a good choice of altitudes, knowledge of the aircraft and vast experience as a whole were not in vain. If Chkalov flew 9130 kilometers, then the second ANT-25 jumped over 12 thousand. Gromov crossed the United States from north to south and was ready to fly even to Mexico, but the political task was for the United States, and the ANT-25 sat in California.

Be that as it may, both crews received a well-deserved triumph.

Ctrl Enter
Noticed a mistake Highlight text and press. Ctrl + Enter
We are
Chernobyl notebook. Part of 3Father told
44 comments
Information
Dear reader, to leave comments on the publication, you must to register.