Semyon Tymoshenko: there are no victories without defeats. To the 50th anniversary of the death of Marshal 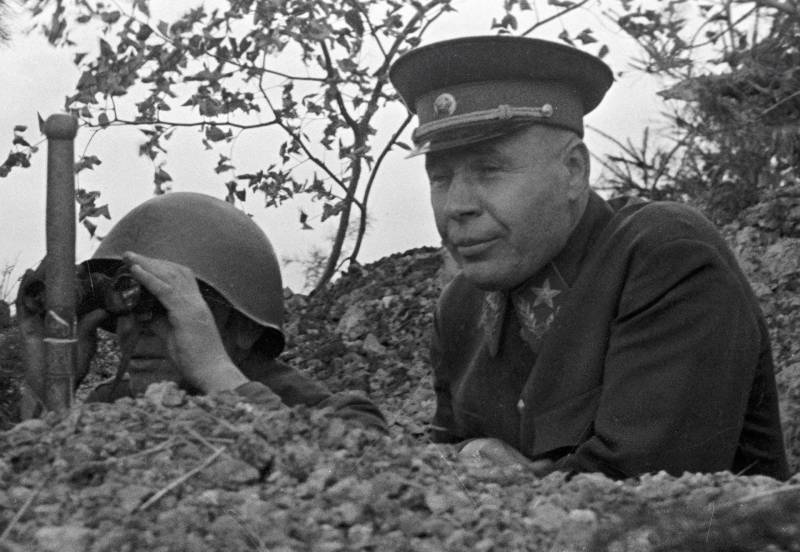 Semyon Konstantinovich Timoshenko, who died 50 years ago, on March 31, 1970, is, on the one hand, as it was customary to say in his time, a “typical representative” of the brilliant cohort of Stalin's Marshals of Victory, and on the other, a figure that has a rather ambiguous interpretation in stories Great Patriotic War. Many researchers of his life’s path, by the way, to this day cannot come to the conclusion whether Tymoshenko should be considered an unconditional “lucky man” or a person who has been plagued by fatal failures for a long time.


The future marshal was born in the Bessarabian province (the territory of the current Odessa region) and was 17 in a row a child in a peasant family. He survived - it’s already luck ... Drafting into the army in 1914. Yesterday’s military laborer’s military career was quite successful. After graduating from a machine gun school, Tymoshenko fought excellently, heroically. Of all the four degrees of soldier George, only the first — the highest — did not manage to get. Surely she would have been rewarded, but the hard hot corporal had pulled to go on the physiognomy of his own company commander, who was mocking at his comrade.

For such things in wartime conditions there could be only one penalty - execution. They sentenced him to it. Saved Semyon Konstantinovich that, taking into account "outstanding feats and merits," the tribunal at the last second softened and sent the shrew not to the wall, but to hard labor. Doubtful “pardon”, but it was January 1917 in the courtyard, and there was nothing left to exist for hard labor with tribunals on Russian soil. Lucky ...

It is clear that after all this, the choice between the red and white camps for the convict freed by the revolution did not stand in principle. Tymoshenko began the civil war, as they say, “from scratch”, as an ordinary Red Guard, and ended it as commander of a cavalry division, holder of three orders of the Red Banner and winner of an honorary revolutionary weapons.

From this, in fact, moment, some of the historians begin to plant natural fiction around the fate of Semyon Konstantinovich - they say that his enchanting career rise and further elevation to the Red Army are solely due to the fact that when participating in the defense of Tsaritsyn, Tymoshenko met with the leader Stalin, who “liked” something. What can I say? Firstly, there were more civilized take-offs and faster, and secondly, it was not about dating that matter, but about the fact that after being wounded on the battlefields about five times, at least Tymoshenko had never abandoned his command or left the system . And he smashed the “whites” more than successfully. It was not without reason that the “Red cavalryman” of the Red Army subsequently called him Budenny, Tukhachevsky.

In the 30s, Tymoshenko "grew" quite intensively, passing all the necessary career steps - the commander of the corps, army, and the Kiev Military District. In 1939, he took an active part in the return of the territories of Western Ukraine and Belarus to the USSR, and a year later, perhaps, the peak moment came in Tymoshenko’s activities, as a commander — the troops of the North-Western Front under his command break through the “insurmountable” Mannerheim Line, bringing the USSR the final victory in the Winter War with Finland. Today, again, some people argue: “right” or “wrong” this operation was carried out, however, Comrade Stalin had no doubts about this. Tymoshenko receives the first Hero Star, becomes Marshal and People's Commissar of Defense of the USSR.

For what deed committed in this post, he definitely should pay tribute to enormous respect, for this is a personal appeal to Joseph Vissarionovich with a report on the need for the speedy release from prison of a number of those who went there "for company" with true conspirators during the investigation of the "military case" Red Army commanders of various ranks. When discussing this point, completely abusive versions often arise that the People’s Commissar decided to do this solely because of “special proximity” to Stalin, and then almost shook with fear, expecting “whether the NKVD black car would approach” . And laughter and sin ...

The leader in such matters did not at all discount on any personal relations. It was possible to convince him only with clear arguments and a firm position. Tymoshenko succeeded. He pulled out many future creators of our Victory, including Konstantin Rokossovsky, because of the "thorn". For this alone, he bowed deeply to him. And Semen Konstantinovich was not afraid in his life of anyone and nothing - this has already been verified more than once ...

The dismissal of Tymoshenko from the post of People’s Commissar of Defense in July 1941, very soon after the start of the Great Patriotic War, some undertake to interpret as a manifestation of what Stalin “laid the blame on him for the unpreparedness of the Red Army” to the start of hostilities. More than doubtful. If so, it would not be reduced one step, but wiped off into powder. It’s just that Joseph Vissarionovich, seeing how events unfold, was forced to lock the entire leadership of the country (including the military) personally, creating the Headquarters of the Supreme High Command. The People's Commissar of Defense in such a situation turned into a figure of not paramount importance. And Tymoshenko was needed by the Supreme at the front.

In 1941, almost all of the activities of Semyon Konstantinovich (as, indeed, the vast majority of domestic military leaders) was reduced to the fulfillment of the simplest order: “Hold on at all costs!” Here he was definitely “lucky” to the fullest - Tymoshenko invariably finds herself in the most difficult sections, in fact, hopeless. Nevertheless, the same battle of Smolensk, even with its terrifying losses, became the guarantee that the Red Army subsequently was able to defend Moscow. It is completely incorrect to hold Tymoshenko responsible for the Kiev catastrophe - he was appointed to command the defense of the city less than a week before his forced surrender and three days later he gave the command to withdraw troops. Another thing is that some of his subordinates did not hurry to fulfill this order, which led to tragic consequences.

However, Tymoshenko managed to get even with the Nazis a couple of months later, having brilliantly carried out the Rostov offensive operation.

Having knocked out the Fritz from Rostov-on-Don, the Red Army won one of its first significant victories in that war. The real, serious defeat of Tymoshenko was the Kharkov operation, which in May 1942 resulted in a real military collapse of the Red Army - with huge losses and strategic losses. This is, perhaps, the most tragic page of the general activity of Semyon Konstantinovich, which remained an eternal pain for him. Nevertheless, even after the incident, they do not repress him, do not deprive him of ranks and the right to command - in 1942, troops led by Tymoshenko took part in the initial stage of the Battle of Stalingrad.

But after this there is a complete "excommunication" of the Marshal from the leadership of any units and formations of the Red Army. The Supreme turns him, in fact, into a controller and coordinator, a representative of the Headquarters on various fronts. With the personal participation of Tymoshenko, many offensive operations are being developed. In any case, he earned his Order of Victory honestly, like all other awards - from St. George's Crosses to the Stars of the Hero.

After the war, the fate of Semyon Konstantinovich also developed quite standardly - the command of a number of military districts, a group of General Inspectors of the Ministry of Defense, leadership of the Soviet Committee of War Veterans. He differs from many of his comrades-in-arms except perhaps by one - the marshal did not leave a single line of memoirs. He said - I’m not going to lie, but they won’t let me write the truth! Given that the proposal to "take up the pen" came to him, most likely, at the time of Khrushchev, we can assume what kind of "truth" they wanted from the marshal. The same Rokossovsky sent such messengers, persuading him to throw mud at Stalin, away. Tymoshenko simply refused to write anything at all. The same thing.

You can try to determine for a long time and meticulously: what was more in the fate of Semyon Konstantinovich - ups or downs, successes or failures ... In any case, his heroic life path indicates that there are no victories without defeats, and most importantly in soldier’s fate - this is not a calculation of the relations between them, but loyalty to the homeland and oath.

Ctrl Enter
Noticed a mistake Highlight text and press. Ctrl + Enter
We are
Twice Hero of the Soviet Union Semyon Tymoshenko115 marks the birth of the great Russian commander Georgy Zhukov
146 comments
Information
Dear reader, to leave comments on the publication, you must to register.