Why "Sea Launch" relocated to Slavyanka: about the reasons and prospects 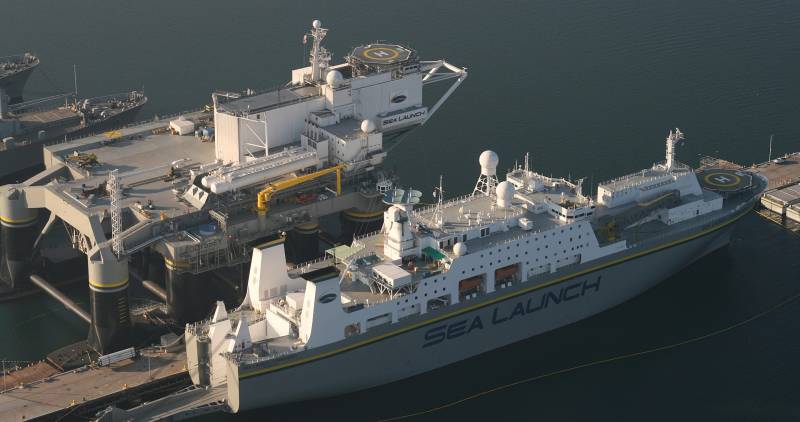 Even people far from space know that the zone of the most favorable conditions for launching rockets is at the equator. It is there that you can maximize the payload of the rockets, the mass of the payload sent into orbit. I will not delve into the physical components that give such an effect, simply because this is the level of knowledge of high school.

The birth of the Sea Launch project is primarily associated with plans to deploy a wide network of commercial satellites in space. At the end of the century was the very peak of this boom. Naturally, scientists have proposed a solution to this problem. It was necessary to create a floating space-rocket complex, allowing missiles to be launched directly from the equatorial waters of the Pacific Ocean.

The project was officially launched in 1995. The founders of the new enterprise were several leading rocket and space industry companies in the world: the American company Boeing, the Russian RSC Energia, the Ukrainian Design Bureau Yuzhnoye and PO Yuzhmash, and the Norwegian shipbuilding company Kvaerner. Upon registration, the project was called Sea Launch.

The project was implemented by March 1998. It was by this time that a special Base port in the USA (Long Beach, California), a mobile launch platform “ODYSSEY” and an assembly and command ship “SEA LAUNCH COMMANDER” were built. Many have already forgotten that the project was successful. The first launch took place in March 1999 with the help of the Zenit launch vehicle.

Until 2014, more than 30 successful launches were made from the floating platform. Over 150000 kilograms of payload were sent into orbit. Moreover, they launched not only light, but also heavy spacecraft.

Among other things, the project allowed to work out the whole complex of preparatory and launch work, the necessary operations with spacecraft, the delivery of vehicles, tests, launch. However, in 2014, in connection with the events in Ukraine, the project was stopped. I do not want to discuss the reasons for this stop today. I think it’s enough to say that politics killed the project.

Ultimately, after two years of downtime and negotiations with potential buyers, the complex was sold to the S7 group of companies for almost $ 150 million. It should be noted that during the negotiations, especially in the material part of the transaction, S7 made many concessions to the Americans and Ukrainians. However, the new division of the company, S7 Space, hoped that it could resume launches in 2018. By the way, the headquarters of S7 Space was built again at the Base Port in Long Beach.

The new owner of Sea Launch tried to restore the complex. But by 2018, it became clear that the Zenit rocket, which was counted on in the S7, will no longer be produced. Ukrainian enterprises are unable to restore production. And the Americans were not eager to continue the project. The sanctions imposed against the Russian Federation by the president of the USA practically made sense the continuation of work. It was then that the decision was made to relocate the platform and command ship to Russia.

However, the S7 Space press service officially announced this only in December 2019. This is due to bureaucratic delays in the United States. For relocation, the appropriate permission of the US authorities was necessary. This permission was received in December 2019.

In principle, people who are interested in the fate of Sea Launch, getting permission was not a surprise. Above, I wrote about some features of the contract for the purchase of a complex in the material sphere. So, in October 2019, work on the dismantling of American and Ukrainian equipment was carried out on the platform and command ship. Yuzhmash’s Boeing information and communications equipment and launch equipment for the Zenit rocket were removed and placed in warehouses in Long Beach, that is, in the home port of the complex.

After all the adventures, after a long struggle for their own property, S7 Space still delivered the complex to Russia. On March 30, 2020, the Hong Kong transport ship Xin Guang Hua with the Odyssey launch platform of the Sea Launch launch site project arrived at the raid of the Slavyanka port in Primorye (80 km south of Vladivostok). Today, March 31, the ship will be removed from the raid and taken to the Slavyansk Shipyard. The command ship SEA LAUNCH COMMANDER is already in Slavyanka.

Knowing the capabilities of the Slavic ship repair plant, it is very likely to predict a fairly quick return of the complex to operation. Shipbuilders will need one to two years to fully modernize their ships. Everything will depend on the components that these vessels need. Simply put, we need a new information and communication system (Russian, to replace the American) and equipment for launching missiles.

What rockets will the Sea Launch launch?

Nobody forbids us to argue and express our opinion. But this lesson is useless: nothing depends on public opinion on such issues. Specialists decide. Here we turn to the experts.

So, the press service of the Progress Rocket and Space Center:

At present, the specialists of our company are discussing with S7 Space the tactical and technical requirements for the launch vehicle to ensure launches from the Sea Launch space-rocket complex and the timing of the main stages of work.
In my opinion, this is enough for conclusions. RCC "Progress" will develop a missile specifically for the Sea Launch complex. Accordingly, new equipment for launching missiles will be developed. On what basis new rockets will be designed is unknown. And it is unknown even to the designers themselves. Only after receiving the technical specifications will it be possible to seriously talk about it ...

In general, the Sea Launch complex will live. The relevance and profitability of this project is undeniable. The company Ilona Mask is using it perfectly today. But the importance of space for business in the process of developing new technologies will also grow. So, the business project is promising.

Ctrl Enter
Noticed a mistake Highlight text and press. Ctrl + Enter
We are
Situational analysis of the death of the MH17 flight (Malaysian Boeing 777), made on the basis of engineering analysis from 15.08.2014Results of the week. “In our cooperative, the board is always agreed”
62 comments
Information
Dear reader, to leave comments on the publication, you must to register.