Yuri Bondarev. In memory of the great Russian man and writer 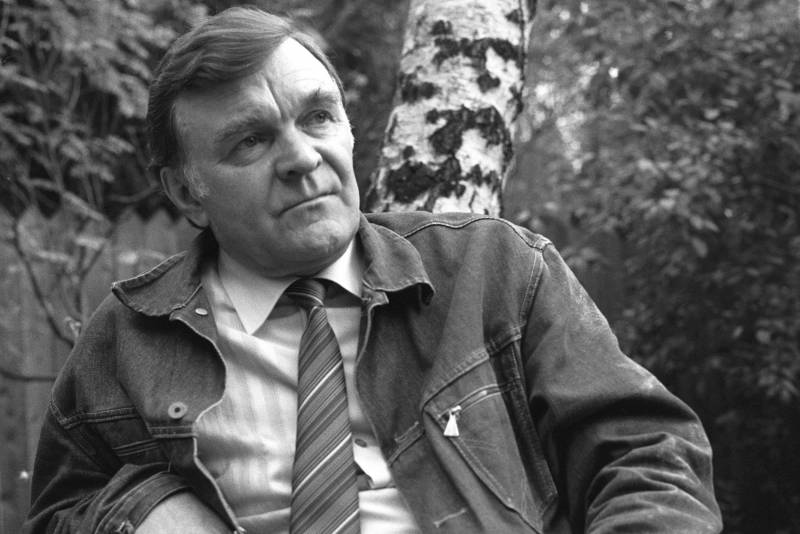 On March 29, at the 97th year of his life, the great Soviet and Russian writer and war veteran Yuri Vasilievich Bondarev. A man who fought with the Nazis near Stalingrad, on the Dnieper, liberated Small Russia, Poland and Czechoslovakia.


A writer and patriot who was not afraid to condemn the Gorbachev “catastrophe” and then the Yeltsin-Putin era, which he called timelessness, time without great ideas, morality, conscience and kindness.

"Our freedom is the freedom to spit in our past, present and future, in holy, untouchable, pure."
But at the same time, the great Russian man did not lose faith in the future of Russia and our people, until the very last he kept hope for the revival of the state.

Yuri Vasilievich was born March 15, 1924 in Orsk, Orenburg province. In the early 30s, his parents moved to Moscow. He studied at high school, the Komsomol member in the summer of 1941 built fortifications near Smolensk. In 1942, after finishing the 10th grade, he entered the 2nd Berdichev Infantry School (evacuated to Aktyubinsk). Already in the fall, cadets of this school were sent to Stalingrad. Yuri Bondarev was credited with the mortar crew commander of the 308th regiment of the 98th rifle division.

In the battles near Kotelnikovsky he was wounded. After the cure, he was appointed gun commander in the 89th Rifle Regiment of the 23rd Rifle Division of the Voronezh Front. He participated in the battle for the Dnieper, in the liberation of Kiev and the western part of Little Russia, fought in Poland and Czechoslovakia. He was wounded, awarded two medals "For Courage". He studied at the Chkalovsky artillery school, recognized as limited fit for service and was demobilized for injuries in the rank of junior lieutenant.

After the war he entered the Literary Institute. A. M. Gorky, where he studied under the leadership of Konstantin Paustovsky. War and "trench truth" became the basis of his work. In the late 40s came the first stories of Bondarev. Since 1951 - a member of the Union of Writers of the USSR. He became famous after the novel “The Battalions Ask for Fire” (1957), the novels “Silence” (1962), “Two” (1964) and “Hot Snow” (1969). Films based on the writer's works were made legendary: “Hot Snow” (1972) and “Battalions Ask for Fire” (1985). Yuri Vasilievich became one of the authors of the script of a large-scale and powerful epic film “Liberation” in its spirit.

Bondarev opposed the anti-Soviet activities of Solzhenitsyn and Sakharov. In the summer of 1988, he publicly condemned Gorbachev’s “perestroika” and criticized the media during the “glasnost” period, which poured dirt on the Soviet past and present. On July 23, 1991, a front-line writer put his signature on “The Word to the People,” an address by prominent Soviet cultural figures, patriotic statesmen to Gorbachev and Yeltsin.

The authors called for saving the homeland, stopping the collapse of Russia-USSR.

"Word to the people" has become prophetic:

“Motherland, our country, a great state, given to us for saving history, nature, glorious ancestors, perishes, breaks, plunges into darkness and non-existence. And this death occurs with our silence, connivance and consent. ... What happened to us, brothers? Why are crafty and imposing rulers, clever and cunning apostates, greedy and wealthy money-grubbers, mocking us, mocking our beliefs, taking advantage of our naivety, seized power, squandered wealth, robbed people of their houses, factories and lands, cut the country into pieces, quarrel are we being fooled, weaned from the past, removed from the future - doomed to miserable living in slavery and submission to omnipotent neighbors? ... Brothers, we wake up late, we notice trouble late, when our house is already burning from four angles, when we have to extinguish it not with water, but with our tears and blood. ... Let us unite to stop the chain reaction of the disastrous collapse of the state, economy, and personality; to help strengthen Soviet power, turn it into a truly popular power, and not into a feeder for the hungry nouveau riche, ready to sell everything and everything for their insatiable appetites; in order to prevent the fire of ethnic hatred and civil war from raging. ”
Unfortunately, these words are in many respects quite consonant with the present time, when the entire planet, and with it Russia, is again plunging into global turmoil. A new collapse of the state, economy and personality is brewing. The Russian state has been turned into a “feeding trough for the hungry nouveau riche”, and “sly and tremendous rulers, clever and cunning apostates, greedy and wealthy money-grubbers ... dissolve wealth ... cut the country into pieces, quarrel us and fool us, excommunicate us, remove us from the future ...”

Ten years later, in August 2001, the newspaper Sovetskaya Rossiya published an appeal “Stop the“ reform of death! ” It was also signed by Bondarev. The appeal criticized liberal reforms, called for dropping the "burden of Yeltsinism", striking the mafia and oligarchy, removing such figures as Gref and Kudrin from the economy, etc. Unfortunately, almost 20 years of Putin's "stability" have passed, and and now there. Only oligarchs became "socially responsible businessmen." Russia, as before, is the semi-colonial periphery of the capitalist world, with a culture dependent on the West, economy, finance, domestic and foreign policy.

The authorities tried to soften the stubborn war veteran. In 1994, on the occasion of his 70th birthday, Yuri Vasilyevich wanted to present the Order of Friendship of Peoples. However, the great Russian writer writer refused to accept the award from the then president. He sent a telegram to Yeltsin, and said that "this will not help the good consent and friendship of the peoples of our great country." They tried to forget the inconvenient and incorruptible Russian writer, the person who was telling the truth. His titanic figure overshadowed all dwarf politicians and "stars".

In 2014, Yuri Bondarev supported the reunification of Russia with the Crimea, he hoped, like many millions of Russians, that the process of rebirth of Russia had begun. However, he continued to note that liberal-democratic “reforms” killed thousands of enterprises and production, agriculture and the countryside. That young people have no future, and they are looking abroad. He talked about the destruction of the Russian language, the decline of morality, the victory of base passions and the "golden calf." Hence - unprincipled, vulgarity and cynicism. About the imaginary "stars", promoted by the media, which only corrupt the people. On the destruction of the Russian school. He noted that all forces should be devoted to the revival of the Russian countryside, agriculture, the people's health depends on this.

Yuri Vasilievich until the last day kept hope. He believed in the victory of justice, kindness and love. In our new victory, for which high goals are needed. We were left by a real national writer who combined the highest human qualities and the simplicity of an ordinary Russian peasant, intelligence and imperialism, collegiality and a desire for freedom.

We are in Yandex Zen
Nikolay Lebedev. Thunderstorm Romanian 1st Panzer Division
Thank you for being born!
23 comments
Information
Dear reader, to leave comments on the publication, you must to register.