Will the military air defense of the Armed Forces of Russia strengthen the meeting with the brainchild of the CF (L) 35 concept? No easy paths foreseen 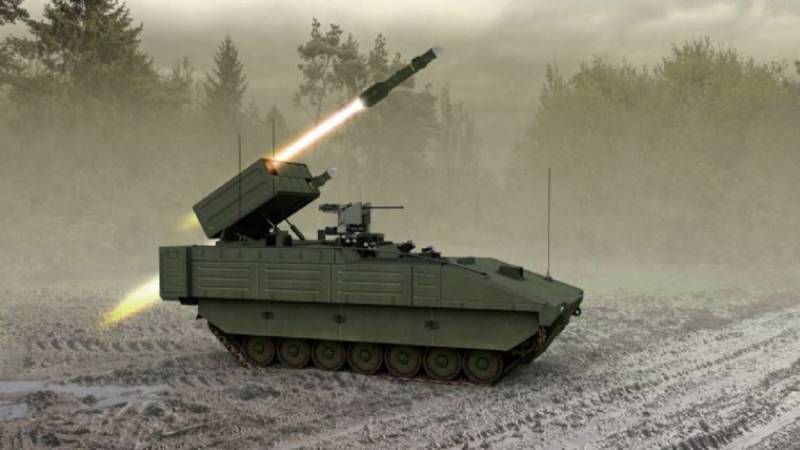 The tactical and technical task announced two weeks earlier by the headquarters of the British military-industrial division “MBDA Missile Systems” for the design of a promising multi-purpose tactical surface-to-surface missile system based on multi-purpose SDs of the JAGM / Brimstone family once again puts expert communities under the military-industrial complex, the defense department and command of the NE of Russia, the dilemma is difficult: either take the path of least resistance by equipping a certain number of pieces of equipment in mechanized units with active defense complexes of the Arena-M and Drozd types, or focus on giving motorized rifle regiments and tank brigades of a significant number of promising and more expensive means of military air defense, capable of repulsing massive missile attacks by the enemy with the simultaneous use of dozens of air attack weapons.

On the one hand, taking into account the principle of layered construction of anti-ballistic / anti-projectile "umbrellas" over armored units, according to which long-range lines are blocked by short-range, medium and long-range self-propelled air defense systems, and the near lines - by KAZs, it is not difficult to conclude that that both methods of increasing the survival of armored vehicles indicated in the first paragraph are technically and tactically justified, which means that they must be immediately embodied in hardware. Moreover, the pre-production and serial prototypes of the missile systems developed by the MBDA Missile Systems specialists within the framework of the Conceptual Force (Land) 2035 missile system can boast the presence of an inclined transport and launch module with 10 guides for the Hellfire / JAGM / family anti-tank / multi-purpose missiles Brimstone 2 ", because of which they will be able to carry out volley launches of these missiles, now and then" overloading "the target channel PFAR-radar guidance of military air defense systems" Tor-M1V / 2U ".

On the other hand, it is not necessary to talk about the significant contribution of the Arena-M and Drozd active defense systems to the formation of insurmountable anti-ballistic / anti-projectile barriers around heavy armored vehicles, since the elevation range of the radar guidance of these active defense systems (KAZ) varies in range from -6 to 20 degrees and does not cover the range of approach of JAGM / Brimstone missiles capable of attacking targets in a dive mode at angles of more than 50 degrees. In this situation, the whole range of tasks for detecting, tracking "on the aisle" and the final interception of attacking "Brimstones" will be assigned exclusively to the combat crew of military air defense systems, the most effective of which are Tor-M2U self-propelled air defense systems and advanced anti-aircraft artillery systems 2C38 “Derivation-Air Defense”.

Having passed the stage of deep modernization of the "equipment" of the Tor-M2U air defense system, they will be able to counter the following trump cards to the advanced British multi-purpose missile systems. Firstly, the ammunition extended from 8 to 16 anti-aircraft guided missiles, which will noticeably reduce the intensity of its "drying out" during the reflection of a massive strike by the Brimstones with the Thor battery. Secondly, the integration into the ammunition of the promising 9M338K missile defense interceptors (RZV-MD), which are equipped with inertial navigation systems with higher-performance missile systems, as well as more accurate radio fuses, which provide more accurate initiation of the warhead directly at the moment of maximum rapprochement with the intercepted missile , which greatly increases the likelihood of damage to its critical components (guidance and control systems) even during the first launch.

Differing in effective reflective surface (EOC) of the order of 0,05-0,1 sq. m, low flight speed (about 1,3-1,5M) and the inability to perform anti-aircraft maneuvers, Brimstone / -2 missiles will be easily detected by Torov-M2U radar detectors at a distance of 7-10 km and “captured” centimeter PFAR guidance radars (with the possibility of immediate shelling of RZV-MD missiles) at a distance of 6-9 km.

Meanwhile, the use of a radio command guidance system in the weapon control system of the Tor-M2U air defense missile defense system limits the target channel of the complex to four simultaneously intercepted means of an air attack by the enemy, which is fraught with a breakthrough of the "missile" umbrella in the event of a massive use of the Brimstones, especially during a hypothetical confrontation in conditions difficult terrain, where promising British missile systems can "sneak up" to units covered by "Torah" at distances 4-5 km. Given the 1-kilometer “dead zone”, only 2-second “windows” (taking into account the reaction time of the fire control system) will be left at the disposal of combat calculations of the Tor-M3U air defense missile systems to intercept the “swarm” from the Brimstone missiles launched suddenly which will obviously not be enough to fully repel the attack, even with the battery of the Tor-M2U complexes.

Correct the situation in this case can only be a program for the comprehensive modernization of 9M338K missiles, which consists in equipping them with active radar seekers (similar to the British CAMM- / ER Land Ceptor systems), which completely eliminates the dependence on continuous illumination with a 4-channel guidance radar and dramatically increase the number of simultaneously fired targets from 4 to 8 or more. As for the “processing” of targets that burst into the “dead zone” of “Torov-M2U”, the promising 57-mm anti-aircraft artillery systems “Derivation-Air Defense”, whose guided artillery shells are capable of intercepting a wide range of small-sized ones, will perfectly cope with this task aerial objects literally immediately after leaving the AU-220M gun’s channel, providing the complex with a “dead zone” of several hundred meters.

We are in Yandex Zen
British light multipurpose missile LMM (Lightweight Multirole Missile)
Brimstone missile against Iranian speedboats
60 comments
Information
Dear reader, to leave comments on the publication, you must to register.