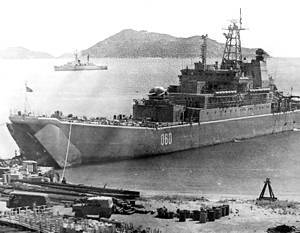 The Russian Navy has expressed its intention to return to its former base in Vietnam, which should temper the geopolitical appetites of neighboring China

The Main Committee of the Russian Navy proposes to resume the work of the military base in the port of Cam Ranh (Vietnam), a source in the Russian admiralty said on Wednesday. Experts believe that such statements are addressed, first of all, to Beijing, which shows an increased interest in traditionally Russian zones of influence.

“The Main Committee completed the work on documents that justified and calculated the need to restore the support point (E & P) to provide Russian ships in the Asia-Pacific region,” a source in the Russian admiralty told Interfax-AVN. According to him, “if a political decision is made, the Navy is ready to restore the base’s work within three years.”

However, no reports of political negotiations between Moscow and Hanoi regarding the base in recent years have appeared. In 2003, Vietnam negotiated the lease of the base to the United States, but they ended without success, and currently the base is used only by the Vietnamese themselves.

Observers do not rule out that the announcements of a possible return of Russian ships to Cam Ranh were not accidentally sounded just a few days after public warnings by the commander-in-chief of the Navy, Admiral Vladimir Vysotsky, who announced growing competition from China, who, according to the admiral, is showing increasing interest in traditional Russian zones influence in a region like the Arctic.

It is possible that the prospect of the Russians returning to the “southern underbelly” of China itself, in its own zone of historical influence, is designed to cool slightly the bold plans of the strategists in Beijing. The fact that China has been rapidly increasing its navy in recent years and sending its ships and submarines to those remote regions where they have never been before has already been known.

“PMTO in Cam Ranh is needed to support Russian warships that regularly fight sea piracy in the Pacific and Indian oceans,” a representative from the General Staff explained to the agency.

A representative of the admiralty recalled that Moscow and Hanoi signed an agreement on May 2, 1979 for a period of 25 years, to use Kamrani as the base of the Soviet Navy, and then 922 Pacific Special Purpose Naval Forces fleet. According to the document, the port allowed the simultaneous presence of 10 surface ships, 8 submarines with a naval base and 6 auxiliary vessels of the Navy.

The PMTC in Cam Ranh, located in 2500 miles from Vladivostok, solved the tasks of logistical support and technical support for the 17 ships of the Pacific Fleet squadron, rest of crews performing combat missions in the Pacific and Indian oceans. The storage capacity of petroleum products was 7 thousand tons. An anti-submarine and rocket armament base and a technical-operational unit were deployed in Kamran. The task of protecting and defending military facilities was provided by naval infantry units.

The 17 squadron's area of ​​responsibility included the South Pacific and the entire Indian Ocean.

After upgrading the infrastructure produced in 1980's, Cam Ranh became the largest foreign military base of the USSR. Soviet warships making ocean voyages (including to the Indian Ocean and the Persian Gulf zone) refueled here, replenished food and water supplies, and were repaired.

At the end of the 1980-x began the reduction of the Soviet military presence at the base. By the beginning of the 1990-x, only a squadron of variable composition (around 10 airplanes) remains at the airfield; most of the berthing fleet and port facilities are being converted to permanent use by the Vietnamese side. Due to lack of funding, the base is gradually declining.

In 1995, a catastrophe happened here: on December 12, three Su-27 fighters from the Russian Knights squadron, returning to Russia from an air show in Malaysia, were killed during an approach to landing. The cause of the tragedy was quickly found out: the radar equipment, which the fighters were supposed to lead for landing, did not work on the base.

In 1998, Hanoi publicly reminded Moscow that the lease of the base expires in 2004. In 2000, the Russian Navy command officially promised to more intensively use a logistics support point. The Headquarters of the Navy said that "this is due to the resumption of active operations of ships in the Pacific and Indian oceans," and promised that "in the near future 500 thousand rubles will go to urgent repair works." However, a year later, in May of 2001, there were reports that Russia was not renewing the lease agreement.

24 July 2001, Russian Defense Minister Sergei Ivanov, said that Russia "must leave Kamrani." 2 May 2002 was signed on the transfer of the former Russian military base to the Vietnamese government.

“The PMTC in Kamrani previously played a key role in ensuring the activities of the Navy. Today, this point would be very useful for supporting warships that fight sea piracy in the Indian and Pacific Ocean, ”Kravchenko told Interfax-AVN on Wednesday.

# {small_popular} According to Kravchenko, "without a system of bases of dispersal, the full provision of the Navy ships in the far-sea zone is problematic." “Surface ships and submarines of the Navy need repairs, resupply and crew rest when performing a wide range of tasks in the World Ocean. If Russia still considers itself a maritime power, the restoration and creation of basing points like Camrani is inevitable, ”the admiral emphasized.

In turn, the chairman of the subcommittee on military-technical cooperation of the State Duma, Mikhail Nenashev, told Interfax-AVN that “renting a naval base in Kamrani will ultimately cost Russia less than providing regular warships in the ocean zone with the help of auxiliary vessels, tankers and ships'.

In addition, according to him, “restoring the base in Cam Ranh will serve to strengthen and develop cooperation with Vietnam and the countries of the Asia-Pacific region not only in the military, but also in many other areas of activity.”