Tulunbek Khanum. The only hansh of the Golden Horde 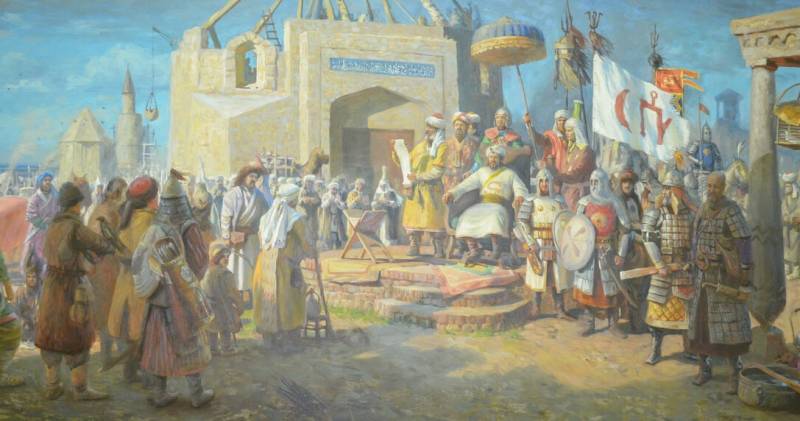 Since 1359, the Horde enters into a period of internal strife. Khans and impostors succeed each other with astonishing speed. And the departure of the previous one was invariably accompanied by a bloody massacre. Naturally, against the backdrop of this discord and turmoil, numerous areas (uluses) of the once united empire increasingly declare their independence. This period entered the Russian history called the Great Jam. This bloody time became a springboard for the exaltation of an unprecedented ruler - Hanshi Tulunbek-khanum, whose whole life is shrouded in myths and riddles.

Who are you, the mysterious hansha?

A variety of disputes among historians still go on about the personality of Tulunbek. A stumbling block is even its origin. It is believed that Tulunbek was the daughter of Khan Berdibek. Berdibek was a Genghiside, i.e. a descendant of Genghis Khan. It was his death during the ascension to the throne of the impostor, the "Khan" of Kulp, that laid the foundation for the feud in the Horde.

Proponents of this version believe that only Tulunbek’s belonging to the genus of Genghisides became the reason for Mamai’s marriage to Tulunbek. Mamai, as you know, was an unusually powerful and ambitious person, holding the posts of Temnik (Tumenbashi - a military leader, personally reporting to the khan) and beclarbek (managing the administration of the khan, actually the second person in the Horde). But he could not become a khan because of his origin, so he decided to rule through the puppet - the weak Abdullah Khan, the son of Uzbek Khan, whom he saved. Abdullah Khan became the head of only half of all the possessions of the Horde, because Mamai could not take control of the entire Horde.

However, despite the colossal power, Mamai understood that during the period of civil strife it would be inexpensive, so he decided to reinforce his status with a successful marriage. In addition, candidates for the throne, both Genghisides and non-Genghisides, were more than enough. However, Tulunbek herself, judging by the opinion of some historians, was more than not bad by herself and made a strong impression on men. 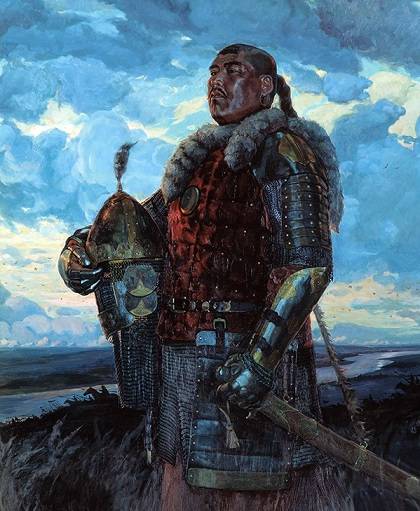 Mom
One way or another, but, relying on the Tulunbek pedigree and his own talent as an intriguer and military leader, Mamai continued to strengthen his power, trying to control the whole empire. In this light, the interpretation of the name Tulunbek-khanum looks very ironic. So, Tulunbek means “the perfect ruler”, and the prefix “khanum” speaks of her title as hanshi.

In 1367, Mamai once again captured the Golden Horde capital Sarai, hoping to put an end to the clutter through his puppet. But already next year a new uprising broke out against Abdullah Khan, i.e. Mom, in the Crimea. Mamai was forced to leave the capital.

As expected, Abdullah Khan almost immediately lost power. And for a whole year, the capital of the powerful Golden Horde walked on the hands of both completely legitimate and simple impostor applicants. Only in 1369, Mamai, who returned from Crimea, recaptured Sarai and returned his protege to the throne. But as luck would have it, Abdullah Khan was not only a weak-willed person, but also could not boast of good health. The nominal ruler of the Golden Horde, which some authors later vaguely called the Mamaev Horde, died in 1370.

Coins of Tulunbek Khanum
The enterprising and powerful Mamaia again faced the question: whom to take to the throne. Of course, Abdullah Khan had offspring in the form of the 8-year-old son of Muhammad Bulak. However, was it reasonable to trust even a nominal power to a young child if even his 30-year-old father could not hold it. And here Tulunbek entered the historical arena again. Having weighed all the pros and cons, Mamai decided nevertheless to elevate Bulak to the throne of the Horde, but with minor status changes.

Both around the origin of Tulunbek, and around its official rank, there is heated debate. On the one hand, Bulak became khan, and Tulunbek from the Genghisids clan became regent. However, researchers were aware of the existence of copper coins minted on behalf of Tulunbek Khanum under the name of pools. At the same time, the pools were minted not only in Sarai, but also in the Ulus of Mohshi, which was once the temporary residence of the Uzbek Khan himself, one of the last fully legitimate rulers of the Golden Horde. Such an honor could not be rendered to a simple regent, which means that the opinion that Tulunbek was just a khan was not only justified, but also materially confirmed.

One way or another, but around 1371, after several military campaigns to strengthen power, Mamai finally declared Bulak khan. Tulunbek again appeared at the margins of world politics, but retained its status, because the pools with her image went throughout the Horde and beyond.

For several years, the name Tulunbek completely disappears from history. The Great Jamming continued. Good luck began to change Mamaia. In 1372, Urus Khan, the owner of the Sardarya ulus, knocked out a protege of Mamay Bulak from Sarai. Bulak fled to Mamai in the Crimea. Having gathered strength, Mamai only in 1375 returned the throne to Bulak, but not for long. The once omnipotent temnik quarreled with Moscow, sowed strife in its own ranks and did not make out a powerful enemy from the east - Tokhtamysh. 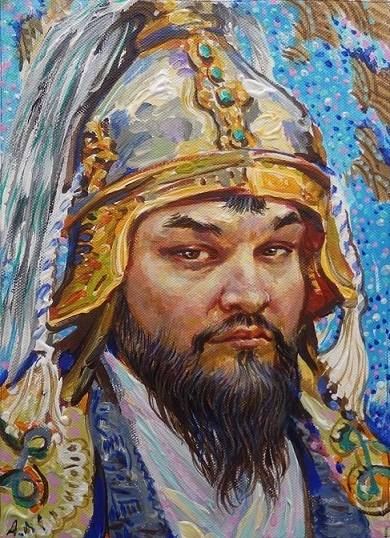 Tokhtamysh
Having suffered a defeat on the Kulikovo field, where the formal khan Bulak was also supposedly killed, Mamai rushed to gather a new army. But at the same time, in 1380, Tokhtamysh, cracking down on the eastern part of the Horde, headed west, hoping to become a khan of the Golden Horde. In the same year, Tokhtamysh defeated Mamai, who was betrayed by his own military leaders.

The reward to the winner went to all the “wives” of Mamai, including Tulunbek, whom the new khan took as his wife. Apparently, Tokhtamysh regarded Tulunbek as a very valuable trophy. In addition, this trophy was of khan's blood, so it could in the future strengthen its legitimacy in order to stop the clutter. And he succeeded. Tokhtamysh restored the Golden Horde.

However, in 1386, Tokhtamysh executed Tulunbek. However, many historians indicate that the execution was a retribution for participation (or suspicion of participation) in the conspiracy. One way or another, but the only woman who flew to the unattainable Golden Horde heights, was deleted from the list of living.

Due to the fact that only tiny grains of mentions in the annals and the Golden Horde pools remained in history about Tulunbek, which automatically spoke about the extraordinary significance of this woman in the history of the Horde, there are a great many versions of who was hiding under this name. The above is only average. 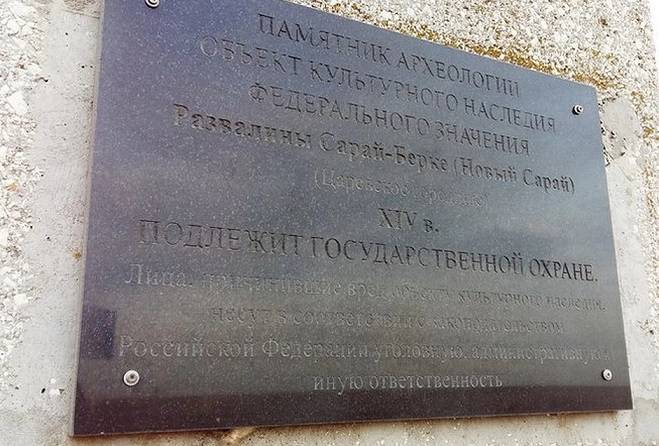 A small tablet on the site of the wasteland where once was the capital of the empire
So, according to one version, Tulunbek was the daughter of an influential Bey from the Yashlau clan (clan prince of the Turkic tribe Yashlau) Hadzhibek. And she was not Mamaia’s wife at all. On the contrary, Tulunbek won the heart of Tokhtamysh, who showered his wife with all kinds of gifts and did not think to kill her. Over the years with her beloved spouse, she gave him seven children, including the eldest - Jalal ad-Din-khan.

Another version even says that Tulunbek was ... a man, and the trouble is in spelling and reading the name of the new khan. In this light, Tulunbek becomes another protege of Mamai.

But the most romantic version represents Tulunbek in the form of a true warrior. In this version, the Genghis Tidulek Khanum was the wife of Khan Aziz-sheikh (the Genghisid who ruled in the Horde from 1365 to 1367). When the dear spouse was killed by the conspirators, she managed to survive. Moreover, having gathered strength and allies, the brave Hansha not only punished the impostors and conspirators, but also ascended the throne. And her three-year rule was peaceful and calm, until the next applicant killed the Hansha.

Apparently, the “jam” with the versions will continue much longer than the historical civil strife of the Golden Horde continued ...

We are in Yandex Zen
Murders in Russia and in the Golden Horde: how they looked
Battle of Kulikovo - the day of Russian glory and the collapse of Mamaia
17 comments
Information
Dear reader, to leave comments on the publication, you must to register.