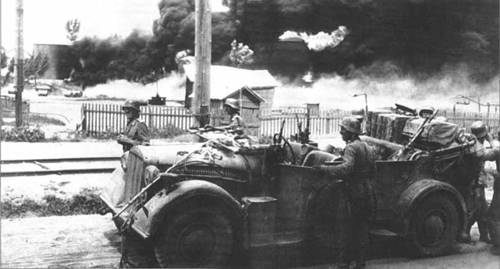 German units on the background of a burning tank farm in Krasnodar. 1942 year

On a hot day on August 9, 1942, our troops left Krasnodar in a hurry and retreated beyond the Kuban, towards the foothills of the Hot Key. The construction of the defensive fortifications of the city did not have time to finish when the German motorized units broke through the front and advanced to the outskirts of the city. Over Krasnodar, high in the sky, covering the sun, clouds of black smoke rose from the burning tank farm. The distorted remains of the blown up railway bridge over the Kuban River pounded angrily on the supports nearby. The city elevator was burning with grain that did not reach the enemy. The city froze in suspense.

It so happened that my parents at that time remained in Krasnodar, unable to evacuate. They saw everything with their own eyes, experienced those events that forever engraved in their childhood memory.

To convey the full picture of what is happening, I supplemented their stories with known facts. 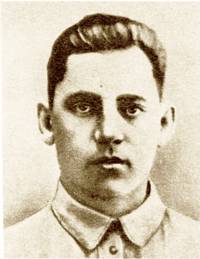 The 56th army, which included the 1195th mixed artillery regiment of the reserve of the High Command, in which the Red Army soldier Stepan Dmitrievich Perederi fought, restrained the enemy’s summer offensive near Rostov-on-Don. In July 1942, the army moved south, where it participated in defensive battles near Krasnodar. Motorized units of the enemy were moving along the heels of our retreating units, trying to catch up, surround and destroy the main forces of the Red Army. The construction of urban defensive fortifications did not have time to complete. To avoid unnecessary losses, a difficult decision was made to leave the regional center. But they also didn’t have time to transport everyone to the Kuban. The Germans sought to cut off the retreating units, capturing the Yablonovsky bridge and the Pashkovskaya crossing, in order to cross the Kuban on the move and defeat the retreating army.

“The battle for Krasnodar began in the morning. The rearguards of the 56th Army, skillfully operating in gardens and city blocks, fought for time gain. They needed to ensure the withdrawal of columns of Soviet troops along bridges beyond the Kuban. Large warehouses of military property, food and fuel were taken out or set on fire. On August XNUMX, German radio announced: “Today, Krasnodar was captured by our troops ...” But this was only half true. The eastern suburbs of Pashkovskaya were still stubbornly defended by the Soviet units. Numerous Soviet columns continued to cross the bridge across the bridge. ” 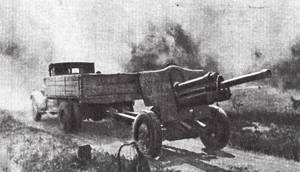 My father, Viktor Ivanovich Kantemirov, recalled how he saw on the street on the morning of August 9 that two army trucks ZIS-5 were moving from the north-western outskirts towards the center of Krasnodar. The first car, with the military in the back, drove on, and the second, with a 45 mm anti-tank gun attached to it from behind, stopped at the intersection of the former Lugovoi Street and the Barracks Lane. The tall and broad-shouldered driver unhooked the gun and began to unload shells from the body. This Red Army soldier was a 33-year-old tractor driver from the village of Ivanovskaya Stepan Dmitrievich Perederiy. Several other local big-eyed boys appeared immediately and began to help carry boxes with shells and hastily equip a firing position. Together with my father were his peers, 14-15-year-old boys Nikolai Koval, Fedor Sychev, Alexander Repalov.

Soon the sound of approaching technology was heard. Quickly thanking the boys for their help, Stepan strictly ordered them to go home, and drove the first shell into the cannon. But where is it, the guys just managed to take cover nearby in the trench, when a shot crashed. They did not think to run away. From their shelter the boys did not see the whole picture of the battle. As they later wrote in various articles, that there was an armored car, motorcyclists with machine guns and Tanks. Although both my father and Nikolai Koval talked about two German tanks. The gun hit direct fire, and the first shot hit German technology. The gunner fired non-stop, his "forty-five" could produce up to 20 rounds per minute. Armor-piercing shells gave way to high-explosive fragmentation, according to infantry. The machine gun was also used. The Germans were stunned to run into such a furious rebuff. They could not know that only one man was fighting against them.

In moments of calm the boys brought shells. It is believed that an unequal battle lasted more than three hours, but for the boys the time seemed to stop. And when tanks appeared on the street, a deadly duel began. Stepan managed to knock out one tank, but his gun was damaged in return shots. The gunner was thrown back by the explosion - shell-shocked. Then he jumped into the car and was already leaving when he was overtaken by a shot from the second tank. My father saw a dead gunner fall to the ground from a broken cab of a stopped truck with a bloodied wound in his side. The Germans, astounded by the courage of our fighter, allowed local women to pick him up and bury him. A letter was found in his pocket to his wife, who remained in Ivanovo with three children:

“Masha, don’t worry. I am alive and well, victory will still be ours, a kiss for me children. "
At the place where Stepan Perederiy was buried, there was a tablet on which someone had drawn with a chemical pencil: "Here lies a Russian soldier from Ivanovka." After the war, it was possible to establish the name of the hero and rebury him in his native village of Ivanovo.

For this feat, Stepan Dmitrievich Perederi was awarded posthumously the Order of the Red Banner. 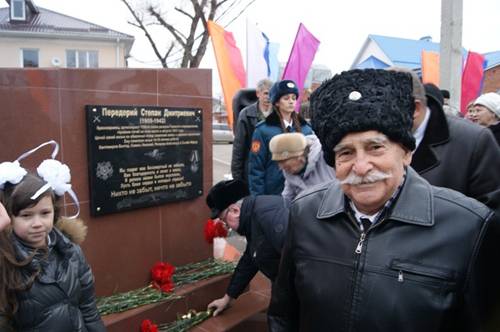 My father near the monument to Stepan Perederey, installed at the battlefield

The occupation of Krasnodar

During the German occupation of Krasnodar, my father and local guys obtained important information about the location of German technology in the city for the Krasnodar underground. Using their intelligence data, our night bombers inflicted airstrikes. And in the afternoon he, lying on the roof of the barn, watched numerous air battles that took place in the sky above the city. Then he dreamed of becoming a pilot in order to take revenge on the fascists who ruled in the city. At the Dynamo city stadium, surrounded by a barbed wire fence, they held our prisoners. Father said that the German soldiers passing along their street looked with interest at the wooden gates of their house along Artilleriyskaya Street. At the gate, with the help of a magnifying glass, he burned the Aurora cruiser the previous summer. 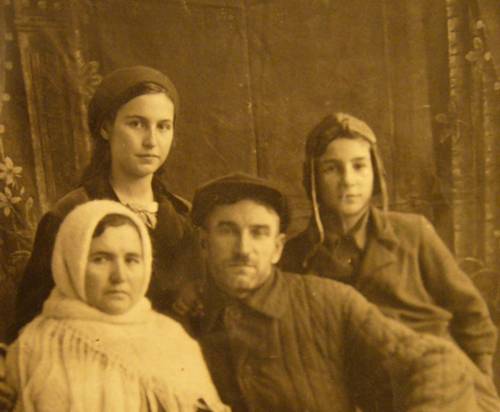 Kantemirov family. My grandfather served as a nurse in the 36th Red Banner Plastun Regiment, part of the 18th Army. After the hospital (a wound to his lower leg) he arrived home for a visit. Victor in the helmet of a pilot stands behind him. 1943
My mother, Inna Ivanovna, was also in Krasnodar at that time. Grandfather went to the front, and grandmother remained in the city occupied by the Nazis alone with three daughters. Mom was then three years old, the older sister Alla was eleven, and the younger sister Elea was only a year old. A Romanian officer settled in their house, and he “graciously permitted” his grandmother to dig a dugout in the yard with his children and live there. Mom was then in the hospital when one of the staff warned her grandmother to be taken away from there urgently. In the morning, a "gas chamber" drove up to the hospital and took all the patients to the outskirts of the city, where their bodies were thrown into a deep ditch beyond Chistyakovskaya Grove and buried. Under the guise of a regular bus with simulated windows in these "death machines", exhaust fumes poisoned people in a closed box. If mom stayed in the hospital, do not write me these lines ... 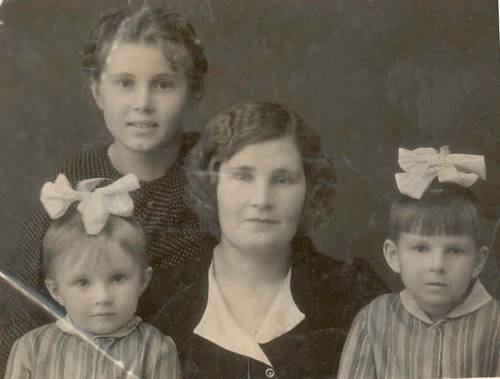 Podgorny family from left to right: little Elvira, Alla (behind), their mother Nadezhda Nikolaevna and my mother Inna. 1945
The occupation lasted nine months, until the Red Army entered the city again. A terrible find on the outskirts of the city was discovered after the liberation of the city from the Nazis. And my mother told me how during the war they were robbed, stealing all grocery cards with things. As a grandmother walked from the city on foot for 40 kilometers to neighboring villages and exchanged the remaining things for food.

Father told how as a boy he collected his own collection of live ammunition and could identify the type of ammunition and the country of origin from the marking. Not only Germany, but also Romania, Italy, and almost all of Europe supplied the Nazis with ammunition. Together with the same boys, at his own peril and risk, he dismantled some mines with a clockwork abandoned by the Germans. We agreed so that if the mechanism suddenly starts, then you need to have time to throw a mine over an earthen mound. Desperate games with death were not just fun. The guys handed over the removed mechanism to the watchmakers for parts that paid them something. While their fathers fought, the sons procured food for their family.

In 1944, his father turned 17 years old, and he went from Krasnodar to the Western Front to catch up with the advancing units of the Red Army, but this is another история. 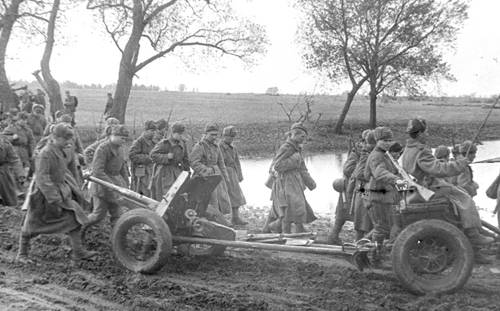 Forty-gun on the battle march 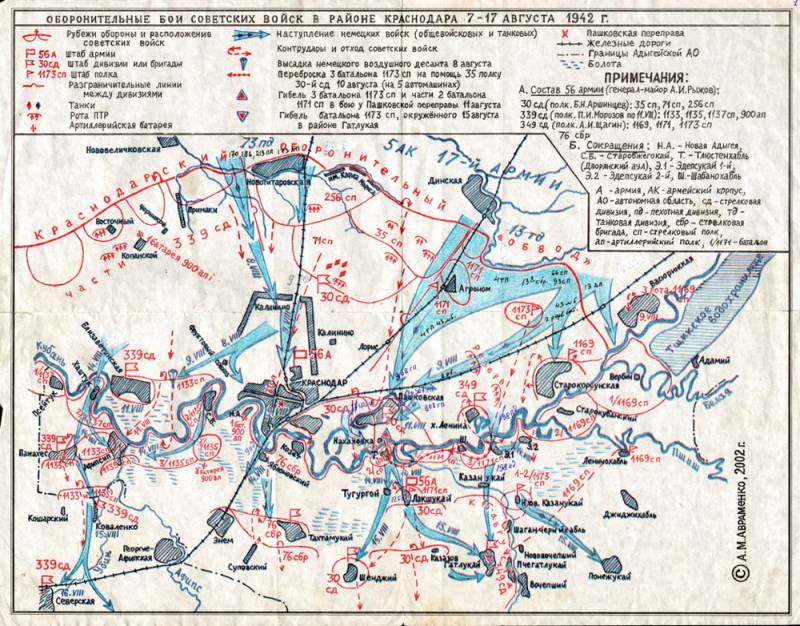 Map of the fighting in August 1942

And some more archive photos: 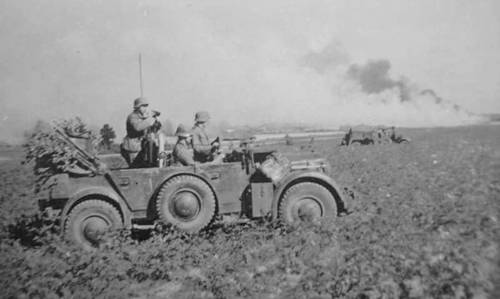 German mechanized units in the fields near Krasnodar. 1942 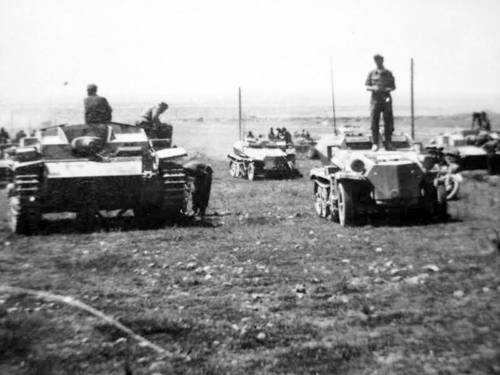 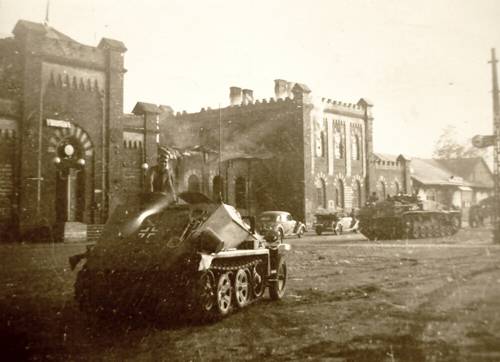 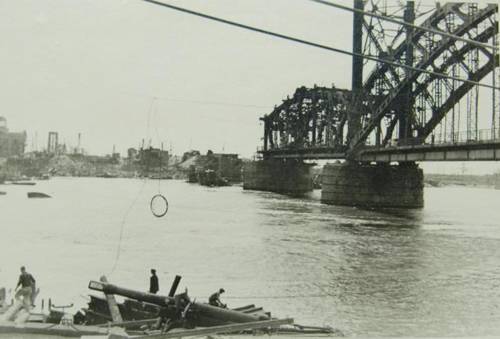 The blown up Yablonovsky railway bridge across the Kuban river 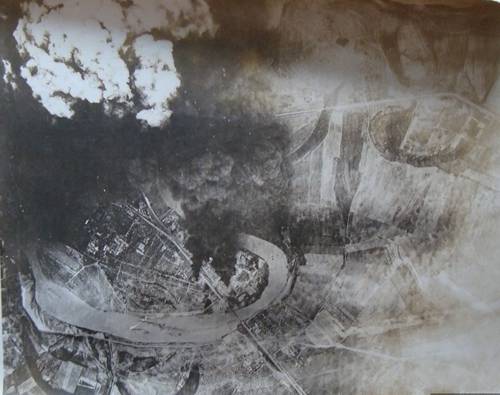 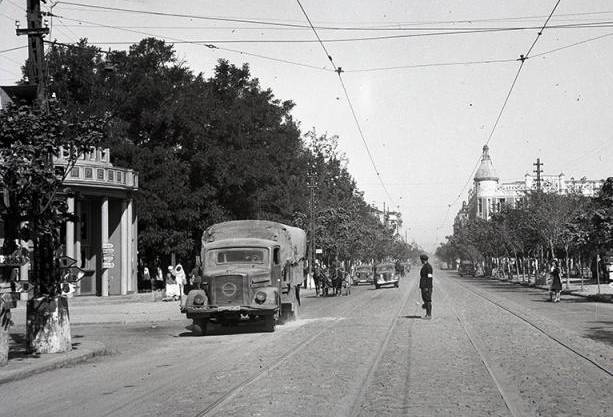 The Germans on the street Krasnaya. Center of Krasnodar. 1942 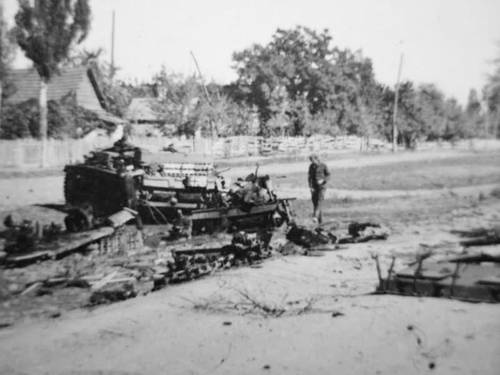 Damaged German tank on the outskirts of Krasnodar

We are in Yandex Zen
"Cauldrons" of 1941. What happened
Thank you for being born!
62 comments
Information
Dear reader, to leave comments on the publication, you must to register.