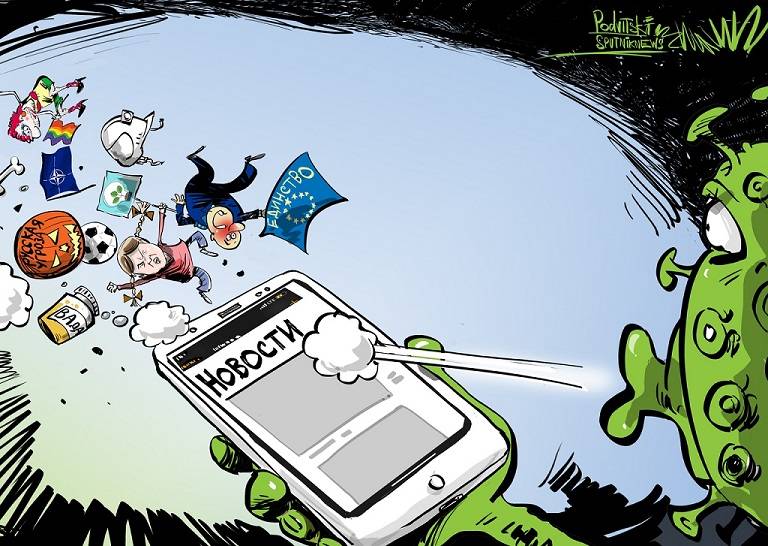 In the first half of the 14th century, “black death” swept Europe. Sinking in prejudice and ignorance, the "cradle of enlightenment" quickly found the culprits. Either witches and sorcerers burned with a blue flame, then black cats got it. Quite a bit and Jews. When, in the 1320s, one of the Jews allegedly found a letter in Anjou proving a conspiracy against Christians, a monstrous wave of lynching of Jews swept from German lands to Gibraltar, then the looters stole their property. In some regions, the authorities quite officially decided to exterminate the Jews as a kind of prevention against the plague.

During the plague of the 1770s that came to the capital of our country from the Northern Black Sea Region during the Russo-Turkish War, a riot broke out. The Moscow archbishop Ambrose, perfectly aware of the danger, forbade prayers at the Bogolyubsky icon of the Mother of God, which was considered healing. Ambrose even began to collect donations for the treatment of patients. But the crazed crowd beat the archbishop to death.

It would seem a long time ago and not true. But, looking at the behavior of mankind, it’s even more ridiculous to ask a question: what conclusions will humanity draw? In general, none other than the monstrous in scope vanity. Brave new world of the end stories Fukuyama arrived, and then suddenly such an unexpected natural (natural?) Gift in the form of a coronavirus. And it began ...

In Europe, due to hysteria in the media, a real hunt for medical masks has begun. In Poland, a batch of 23 thousand medical masks intended for doctors in the Lazio region in Italy was blocked. While trying to remove bureaucratic obstacles, the Italians accused the Poles of stealing a medical load, which is also difficult to call humanitarian, since it was fully paid by Italy.

A little later, after the sad Czech and Polish experience, the Italian authorities, importing medical masks, decided to bring them through the port of Rotterdam. However, when the cargo arrived in Rotterdam and the German distributor unloaded it for delivery to Italy, the Berlin authorities requisitioned it. 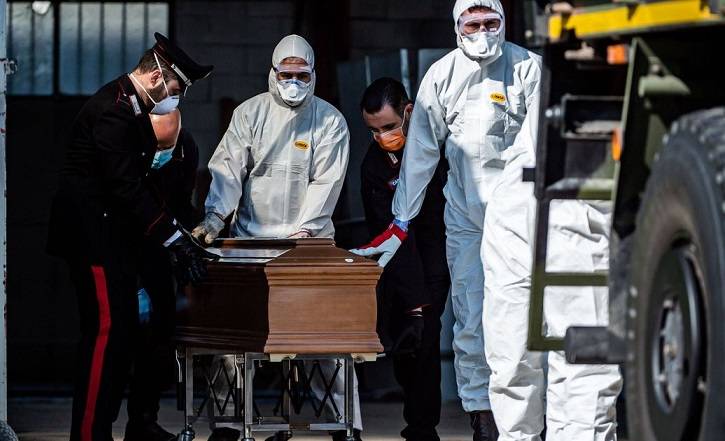 As you know, in French Guiana is the Kourou Cosmodrome, which is jointly operated by the European Space Agency and the French National Center for Space Research, with all the necessary infrastructure. So, from this very infrastructure, or rather, from a warehouse, unknown people managed to steal 40 thousand medical masks. The regimen of the object did not affect the theft process.

Keep up with Western trends and the United States. So, if someone can order medicines or remedies from abroad, then most likely the “cradle” of the sanctity of private property and the open free market will withdraw your purchase immediately upon arrival in the country. 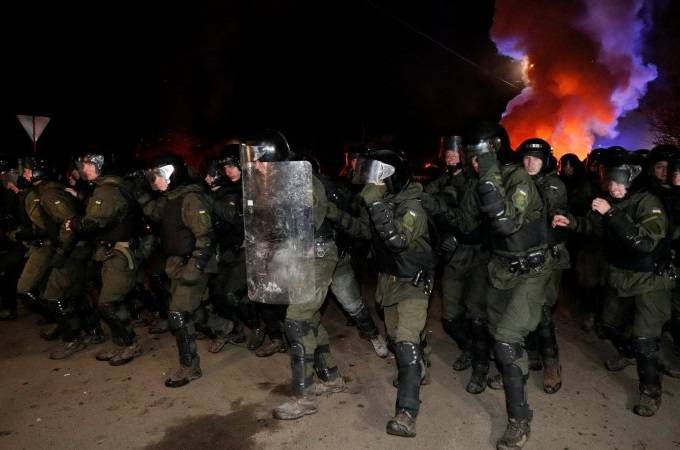 New Sanjars were just a drill
But our Ukrainian neighbors went farthest than all, for whom the shameful “burn the witch” style incident in Novy Sanzhary was apparently just a training. Harassing people who are suspected of being infected, hunting for drugs, fighting in public transport is just the backdrop for much wilder things. So, in the Ternopil region, the body of a 68-year-old man who died from coronavirus was packed by doctors in garbage bags and thrown into the street. Details were later told by the daughter of the deceased Anna Polischuk, who was stunned by the ongoing horror. According to her, the doctors, having thrown the lifeless out onto the street, closed the doors of the hospital, and relatives without protective equipment had to carry the man in the bag to the car and even drag him along the ground.

"The crown, the crown!" - children shouted and threw stones

But all the savagery from the West is somewhat refined. No "good old" bonfires, street battles, at least not yet. But the so-called developing countries have gone disproportionately further. Petty theft and speculation, of course, are included in their “menu”, but the citizens of these countries did not have time to swim in the fat of a magnificent life.

After the coronavirus hit India, the Indians launched a real persecution of tourists, including from Russia, who were in the country. Tourists, these "cash cows", suddenly turned into objects of universal hatred. Tourists are thrown out of hotels, the local population, having seen foreigners, reacts extremely aggressively, and the authorities are in no hurry to stop these actions. And in some regions of the country, the authorities not only condone this, but issue official instructions to expel tourists from hotels. 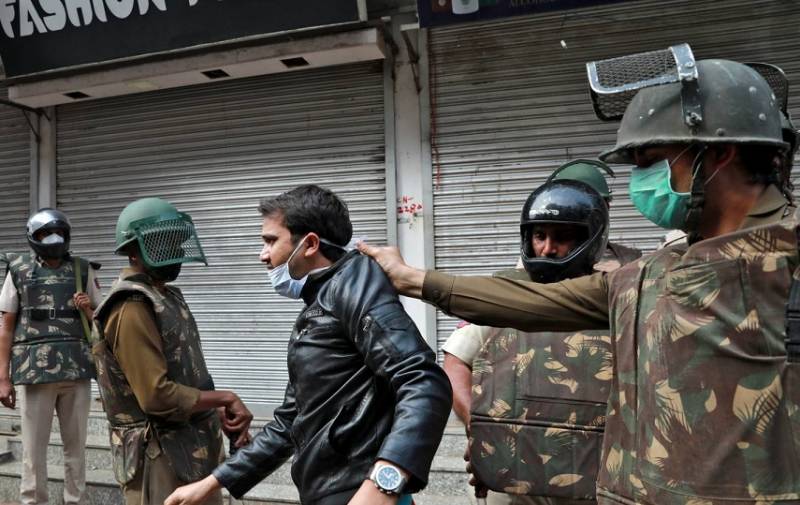 Restoring India
Cases have become more frequent when, with a cry of “crown, crown”, Indian citizens spat on foreigners or threw stones and sticks at them. At the same time, the country is completely closed. Trains, buses and even taxis are suspended. Indian states cover internal borders. On the streets of some Indian cities, the police and voluntary “vigilantes” restore order, so there have been cases of attacks by law enforcement officers on “whites” who tried to purchase food or escape from a closed country.

It comes to ridiculous tragicomic situations. So, some tourists who decided to gather ancient refined wisdom in India, as it is now fashionable among a specific public with a pierced nose and a half body tattoo, were blocked in ashrams - the abode of thinkers and philosophers. The Indian sages, judging no less wisely, declared to their “disciples” that if they went out into the street, they would not be allowed back. And this means that, at the risk of not getting to the airport, the "enlightened" will be without housing, because almost all hotels are closed. 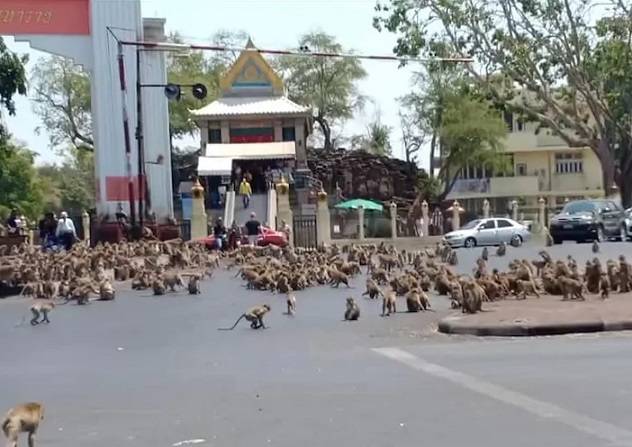 Hungry primates in Thailand attack humans
In Thailand, which has been a tourist Mecca for many years, the coronavirus also forced the authorities to impose strict quarantine. Closed cafes, restaurants, numerous clubs, shopping centers, etc. But the shapeless herds of infantile tourists, sweetly nurturing their own selfishness, continue to come together to once again arrange a feast during the plague on picturesque beaches. The local police decided without a second thought to disperse such gatherings with batons. Not too happy and local residents and, oddly enough, primates, which tourists fed. Now macaques literally attack passers-by, demanding feeding. What’s more wild about this is hard to say ...

When did people start running wild?

It would seem that the outbreak of aggressive inadequacy, theft and selfish betrayal of the former "brothers in the free world" lies entirely in panic because of the coronavirus fed by the media. But this is only one side of the coin, so to speak, too superficial judgment. One outbreak, for all its magnitude and the press feed, could not lead to such individualization of both countries and individual regions, as well as specific individuals.

There is a lasting impression that at some civilizational moment we simply turned somewhere in the wrong direction. In order to build up a desperate race for the consumption of goods and services, mankind was able to convince the holiness and inviolability of the right to eternal hedonism and gluttony at the highest level. Kilotons and terabytes of advertising convinced individuals that they were worthy, and that was certainly all for them.

Society in this design lost all meaning and even importance for an individual engaged in constant consumption of the final product. Moreover, individuals, considering themselves strong and independent, began this very society quietly, and sometimes loudly, to hate and despise. Such a social formation as the state, which was absolutely obliged to free individuals to the grave plaque by all, was especially plagued.

The author does not have all kinds of sympathies for tourists greedy for pleasure, who, despite such a difficult time, rushed for the cordon, buying up cheap last-minute tours. Especially for those tourists who, under the guise of knowing the culture and "wisdom" of other countries, just mess with their ego, following fashion and isolating themselves from a short and non-progressive, in their opinion, society. And the point is not even the lack of personal responsibility, but in egoism. After all, they did not even think about the danger they might pose to society upon their return. And why do they need it. Indeed, these progressive individuals despise society.

And so the countries are closing. And the infantile howl of people who realized themselves to be citizens and part of society so in time for themselves, announced the information field. The paradox is that society cannot turn its back on such people, because this will lead to its own devaluation. But to draw the proper conclusions about the depravity of educating people in such a parasitic consumer approach to life itself is not only possible, but it was necessary yesterday. And all this concerns not only tourists, but also those who only yesterday made money on them, those who now speculate with masks, those who are engaged in information and political speculation ...

In this light, there has been no civilizational leap since the Middle Ages. The realization of this, however, is dug in by large-scale advertising actions, when politicians, after the next terrorist attack, took up their hands and sang: “We are the world” or “We are not afraid”.

We are in Yandex Zen
Martyrs of the 21st Century
List of destroyed the largest and most high-tech enterprises
180 comments
Information
Dear reader, to leave comments on the publication, you must to register.