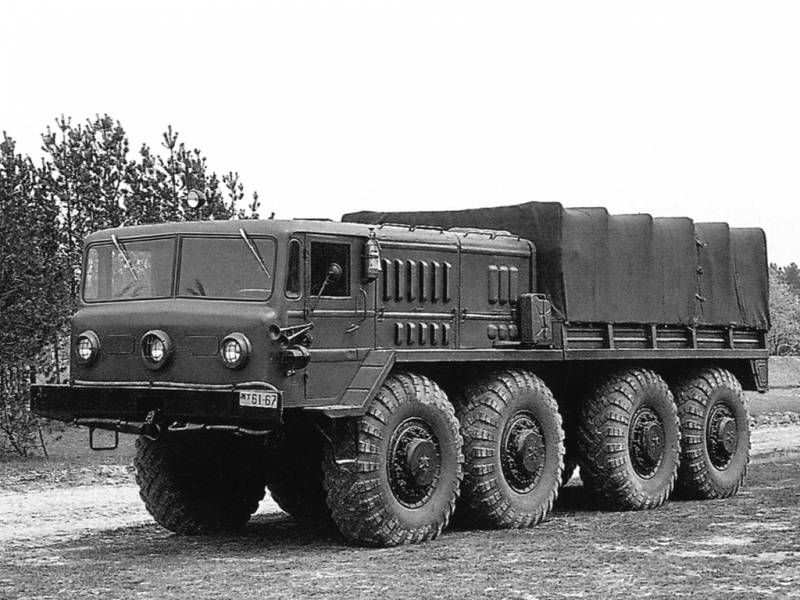 MAZ-535A during the tests. Pay attention to the central infrared lamp, designed to work in the dark with active night vision devices. On this basis, the car was called the Cyclops. Source: trucksplanet.com

Currently, as you know, the Minsk Automobile Plant is not engaged in the development of heavy small-scale equipment. For a very long time this line was given to the Minsk Wheel Tractor Plant (MZKT). But initially it was precisely at MAZ that the decree of the Council of Ministers of the USSR of June 25, 1954 “On the creation of production capacities and on providing the USSR Ministry of Defense with artillery tractors” came. Initially, the army needed precisely wheeled artillery tractors. It was later that Minsk heroes mastered the profession of missile carriers and tank carriers. A month later, on July 23, 1954, secret order No. 15cc was issued on the creation of a special unit of the special design bureau SKB-1. It is this bureau in the future that will become the main one for the birth of the modern Minsk Wheel Tractor Plant. Boris L. Shaposhnik, an experienced automobile designer who managed to work as a chief designer at ZIS (since 1938) and at UAZ (since 1942), becomes the head of the new department. At the time of his appointment, Shaposhnik was working on projects for the Mazovsk 25-ton dump truck and 140-horsepower tractor. 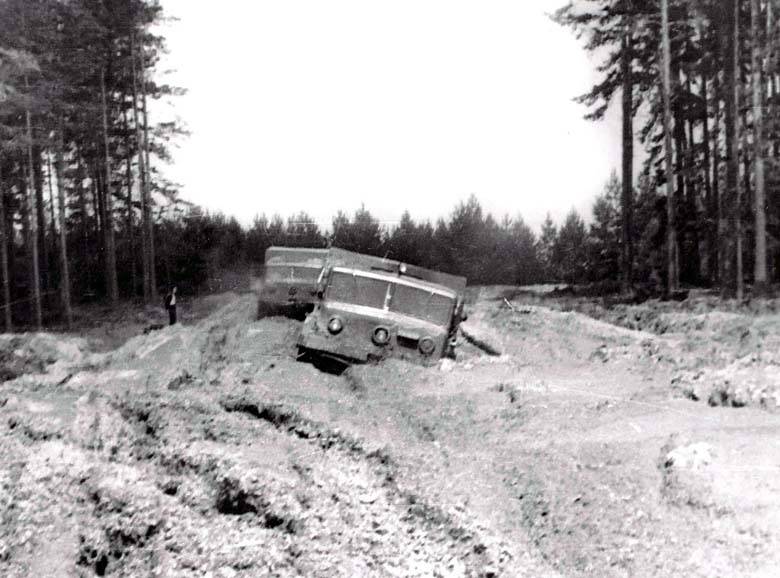 MAZ-535 in trials. Source: trucksplanet.com
It is worth mentioning separately that in 1954 the Minsk Automobile Plant was the youngest enterprise in the industry: an order to organize car assembly production appeared on August 9, 1944. And after only 10 years, the factory workers are already given a serious order for strategic equipment. At the same time, SKB-1 received as a task from the main customer not only the development of a four-axle all-wheel drive vehicle, but also the gamut of semitrailers and trailers for its own designed equipment.

MAZ-535 was not the firstborn of SKB-1. Engineers under the leadership of Boris Shaposhnik pre-stuffed their hand on a single-axle tractor MAZ-529 and a biaxial MAZ-528. And after that, MAZ-535 ballast tractors appeared for towing systems weighing up to 10 tons and MAZ-536 for towing 15-ton trailers and semi-trailers. The latter had the status of an experienced one and was made in a single copy. The program of the 536th machine was subsequently transferred to OKR to develop the MAZ-537 truck tractor and the MAZ-5447 semi-trailer for transportation tanks.

One of the few photographs of the MAZ-536, the only instance of an experimental machine that has become the prototype of the MAZ-537 series. Source: trucksplanet.com
The MAZ-535, designed as a heavy artillery tractor with an 8x8 formula, was for its time a truly revolutionary machine, far ahead of serial western equipment. Unique was the transmission of its own design, which included a comprehensive one-stage torque converter, a planetary three-speed gearbox, a two-stage transfer case, interaxle and sprocket self-locking differentials and planetary wheel gears. In total, the car had 16 driveshafts. 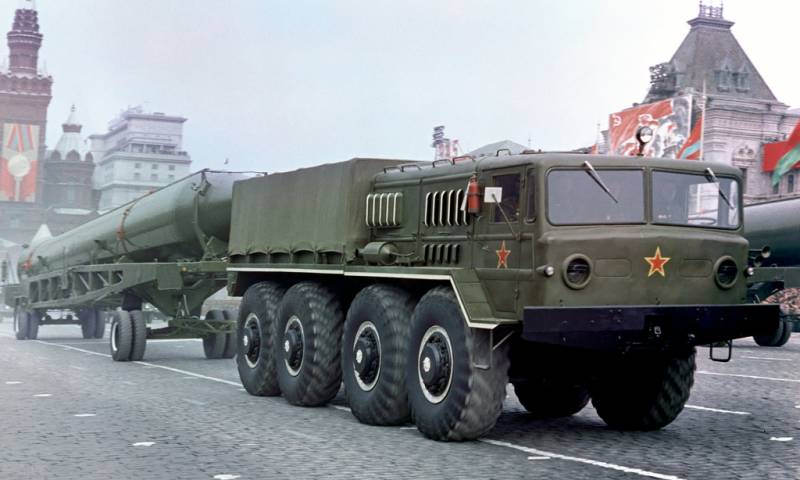 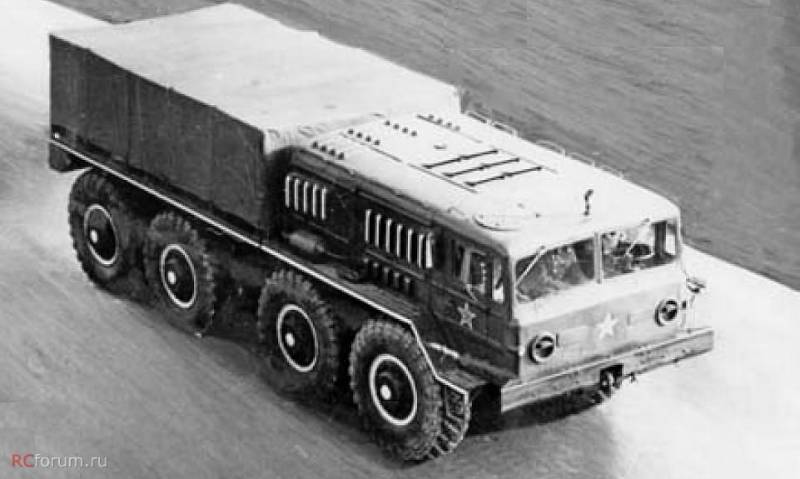 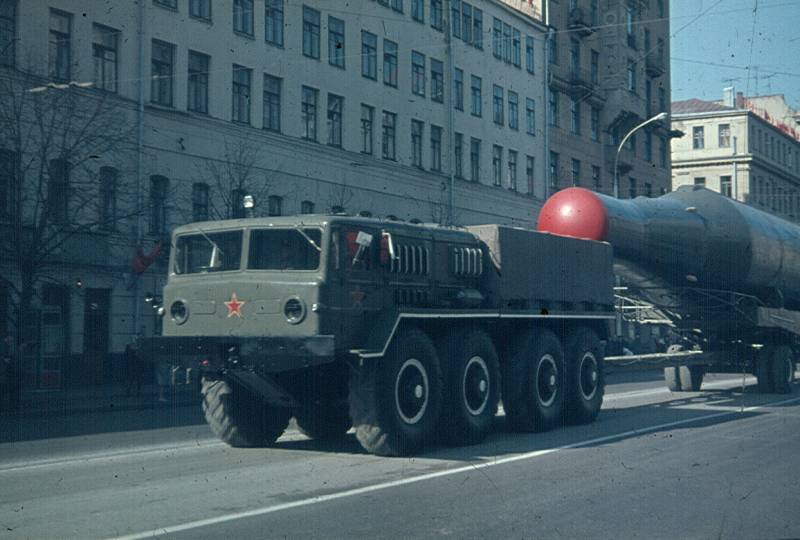 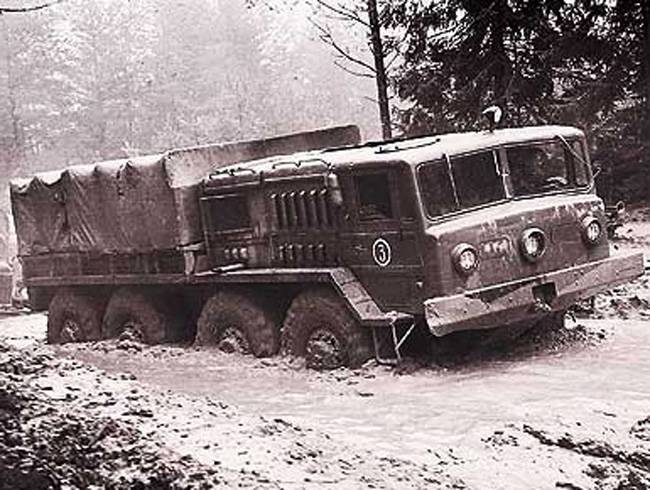 Artillery ballast tractors MAZ-535 (535A). Source: trucksplanet.com
The torque converter is the main highlight of the ballast tractor. It provides a smooth change in torque depending on road conditions without interrupting the power flow to the wheels, as well as allowing smoothing out impacts on the motor. A central differential (more precisely, it would be called an interbody) differential with a forced lock was built into the transfer case. The power plant of the machine is a V-shaped 12-cylinder diesel D-12-375 from the Transmash Barnaul plant with a capacity of 375 hp and a working volume of 38,88 liters. Naturally, such a large diesel engine at that time in the USSR could have one origin - from the legendary tank V-2. The remaining units of the Belarusian hero were also advanced: the front two-axle suspensions were independent, the lever-torsion brackets with hydraulic shock absorbers (the rear two axles were with dependent balancing springless suspension), the two front axles controlled with a hydraulic booster. When version 535A appeared, one of its innovations was the independent suspension of all wheels. Initially, MAZ-535 received all single-wheel wheels, chamber tires with a dimension of 18.00-24 and, of course, with a centralized pressure control system from 0,7 to 2,0 kgf / cm3. The central crane of the swap system was located in the cab, and on the outside on the frame there were individual wheeled cranes to disconnect damaged tires from the main system. The MAZ-535 frame had an original trough shape with built-in spars. It should be noted that similar developments in heavy wheeled vehicles were carried out in the Design Bureau of the Likhachev Plant, but Minsk cars were distinguished by a more thoughtful design. Why? Unlike the four-axle ZiL-135 (it appeared a bit later than the 535th machine) in Minsk, a diesel engine and a hydromechanical automatic machine were installed on the tractor, which saved the machine from the difficulties with setting up a twin-engine transmission. 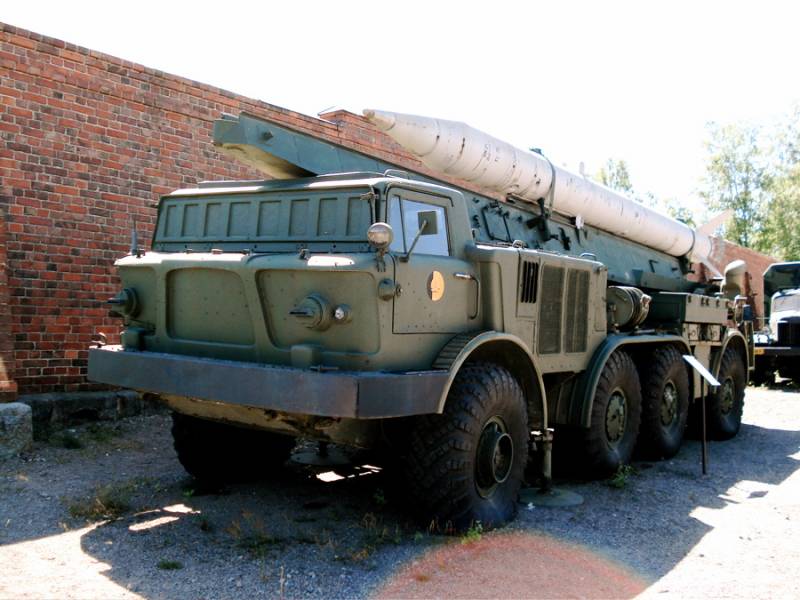 ZIL-135 - the opposite to MAZ concept car. Source: wikipedia.org
The MAZ-535 did not have an abstruse system with steered front and rear wheels, which Muscovites put on the 135th car. This, of course, allowed the four-axis ZIL to unfold almost in place, and also created only four tracks when turning on snow, but it required a complex system of long steering rods running through the entire body. In general, in the case of ZIL-135 and MAZ-535, an interesting contrast was revealed between typical representatives of two independent schools for the design of heavy equipment, headed by V. A. Grachev and B. L. Shaposhnik, respectively. Moscow chose the idea of ​​onboard transmissions and the power plant of their two ZIL-375 engines with a capacity of 180 liters. with. Each through a five-speed transmission brought four wheels of his side. With such a design, Grachev allowed himself to abandon differentials, their locking mechanisms, additional gearboxes and a transfer case, which somewhat increased the overall efficiency of the truck. In addition, the number of driveshafts in ZIL-135 was only eight, in contrast to the Mazovian 16 pieces. The general simplification of the ZIL design also made it possible to seriously lighten the eight-wheeled vehicle. However, in the end, the concept laid down in the MAZ-535 is still alive, but the Zilov developments have sunk into oblivion.

Of course, they could not create such a complex car from scratch in Minsk: at that time in the Soviet Union there was not even an initial experience in designing such high-tech wheeled vehicles. Despite the fact that in Minsk they never spoke and never talk about foreign prototypes, certain borrowings in the work of SKB-1 engineers did exist.

It is clear that at MAZ they studied the heavy four-axle Schwerer Panzerspähwagen Sd.Kfz.234 ARK (from the German Achtradkraftwagen - an eight-wheeled vehicle) developed by the Büssing-NAG - after all, it was the world's first 8x8 armored personnel carrier.

Yevgeny Kochnev in the book "Secret Cars of the Soviet Army" writes that Minskers took the idea of ​​installing a 12-cylinder diesel engine from a German car. On the Sd.Kfz.234 there was a Tatra-103 engine with a displacement of 14,8 liters and a capacity of 210 liters. with. In addition, by analogy with the Germans, MAZ-535 installed self-locking differentials and individual independent suspensions.

If we talk about the layout decisions of the Minsk hero, then overseas influence is clearly visible here. In the early 50s, the T57 and T-58 vehicles, which are artillery tractors of 10 and 15 tons, appeared in the Detroit Arsenal. These were 8x8 prototypes with a cabin with a flat front panel, three frontal headlights and a soft top, taken forward to a short front overhang of the frame. The engine compartment was located behind the cab over four front steered wheels. Doesn’t resemble anything? In the USA, these machines, together with the XM194E3 heavy truck tractor, remained in the category of experimental designs, without having any effect on the American automobile industry. But in the USSR they served as prototypes for a unique family of strategic vehicles. By the way, the Detroit arsenal itself, with its design, production and testing facilities, largely served as a prototype of a similar domestic facility - the 21st Research Institute of the USSR Ministry of Defense. 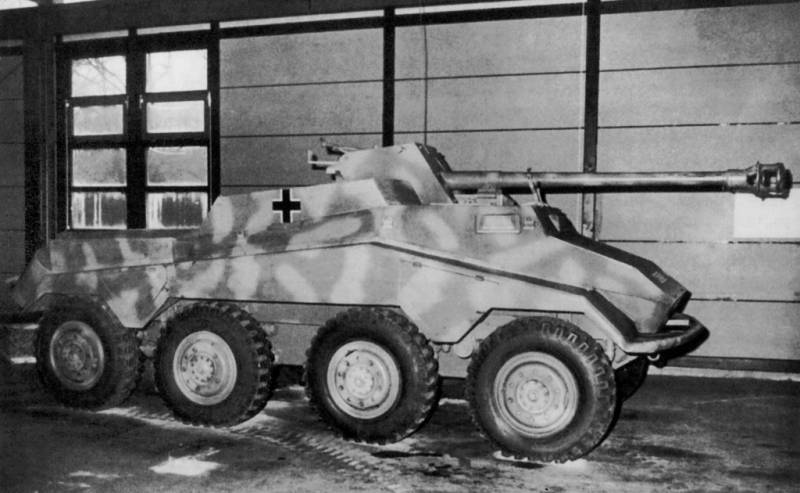 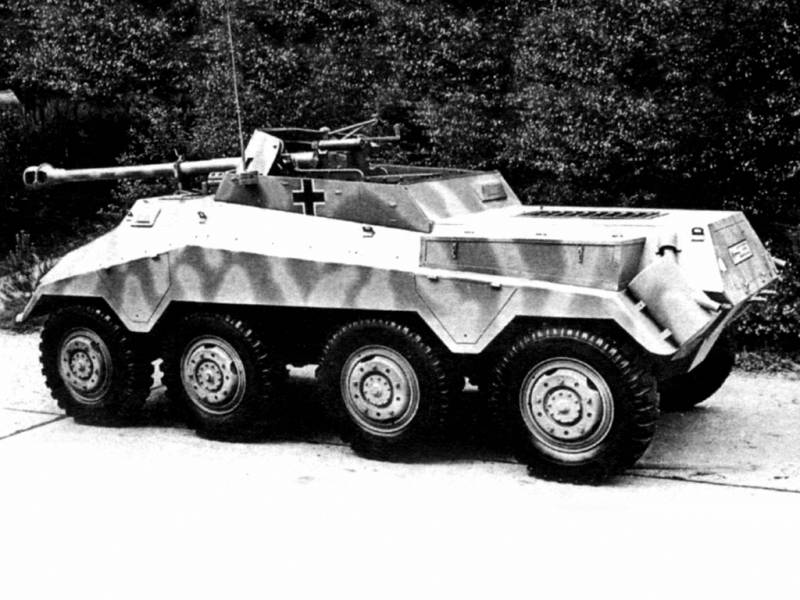 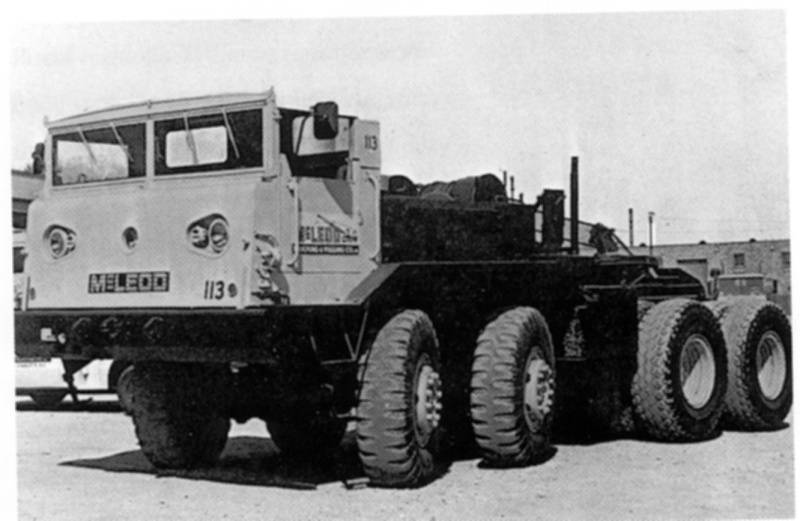 XM194E3 8x8 heavy truck tractor from the Detroit Arsenal with a 530-horsepower V8 engine. 1954 year. Source: autowp.ru
Be that as it may, the technical история any state to the limit is full of examples of creative rethinking of foreign experience, which saves time and resources. And it was precisely this that was acutely lacking for a country that had not yet recovered from the consequences of World War II. The very fact of the development and development of such a high-tech product as the MAZ-535 tractor can already be classified as heroic. 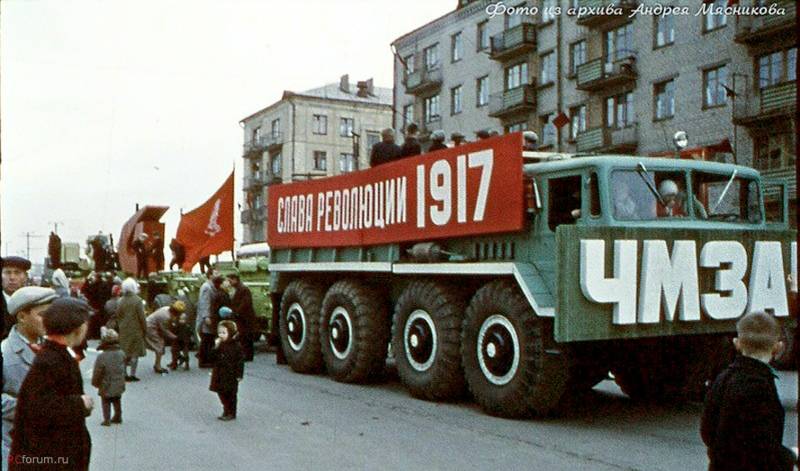 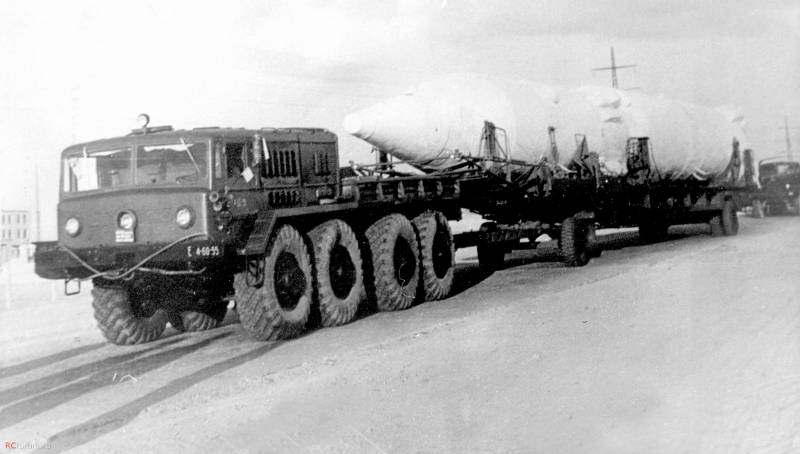 Source: trucksplanet.com
You can find out how MAZ-535 was an unusual machine not only for ordinary people, but also for testers in the book “50 years on the march”, dedicated to the anniversary of the institute in Bronnitsy near Moscow. Now it is the 21st Research and Test Institute of the Main Armored Directorate of the Ministry of Defense of the Russian Federation mentioned above. The test driver recalls on the pages of the anniversary edition:

“Multiaxial heavy vehicles of the Minsk Automobile Plant passed through our 13th department. The first machine was a four-axle chassis MAZ-535. At first it was scary to sit down for him. Huge sizes, powerful engine. And also unusual management. Still: there is no clutch pedal, there is no gear shift lever either. There are only gas pedals and brakes. “I gradually got used to it, and over time it became easier to drive Minsk tractors than machines with a clutch pedal and gear levers.”
To be continued ...