Tons against fighting qualities. Russian Navy against the backdrop of the largest fleets 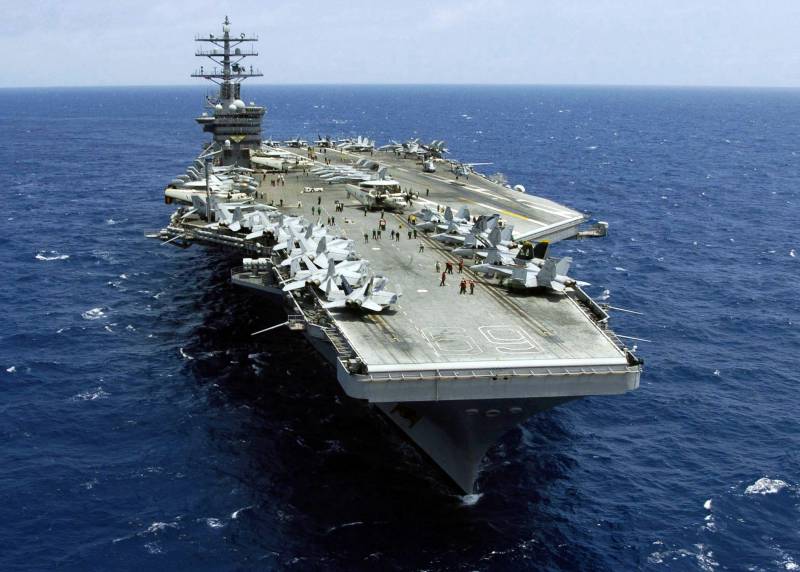 The program for building new ships and upgrading existing ones is paying off. To date, the Russian Navy is again one of the largest and most powerful on the planet. At the same time, it differs in a number of parameters from the Navy of other developed states, which determines the differences in combat potential and capabilities.

Last year, the American organization Center for International Maritime Security (CIMSEC) published interesting statistics on the largest naval forces in the world. The fleets of Russia, China and the USA were in the "top 3". It turned out that they all differ markedly both in the number of pennants and in other indicators.

The leader in quantitative terms is the PLA Navy. They include 624 combat units. In second place was Russia with 360 ships, submarines and boats. The US Navy slightly lags behind it - 333 pennants. Thus, we are talking about quantitative parity between Russia and the United States, however, both countries in this regard almost lose twice the PRC. 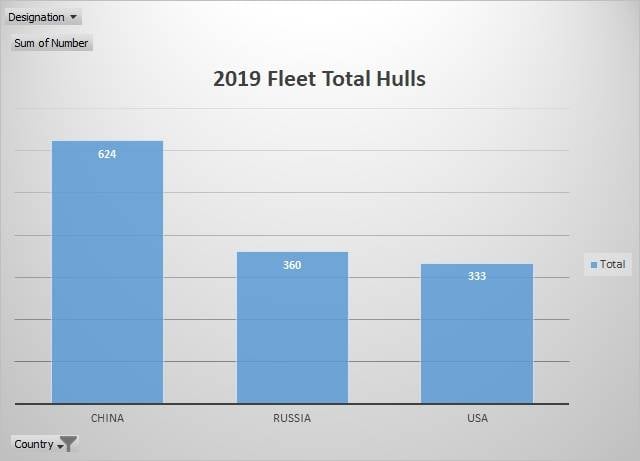 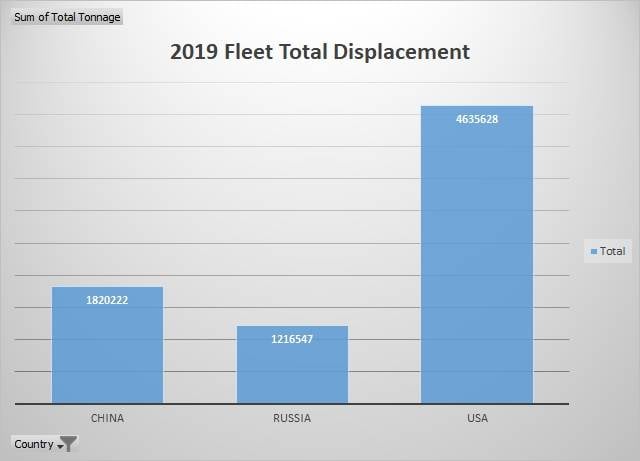 The total number and total displacement of the three fleets of the world according to Center for International Maritime Security
However, the calculation of the payroll does not reveal a lot of questions. CIMSEC also compared the total displacement of warships. In the first place were the United States with 4,6 million tons. They are followed by China and its 1,82 million tons. The Russian Navy closed the top three - 1,2 million tons. This demonstrates serious differences in the structure of the combat structure and ship classes.

It’s easy to calculate that the average unit fleet The United States has a displacement of 13,9 thousand tons, for Russia this figure is almost 3,8 thousand tons, and for the PRC almost reaches 3 thousand tons. These figures even better reveal the features of military shipbuilding and the structure of the fleets of the three countries.

The general and average indicators demonstrate the general features of the development of the fleets of the three countries and the difference in ship composition. In general, it is a matter of the fact that Russia and China in their current development plans give preference to smaller ships, while the United States operates and builds much larger combat units. 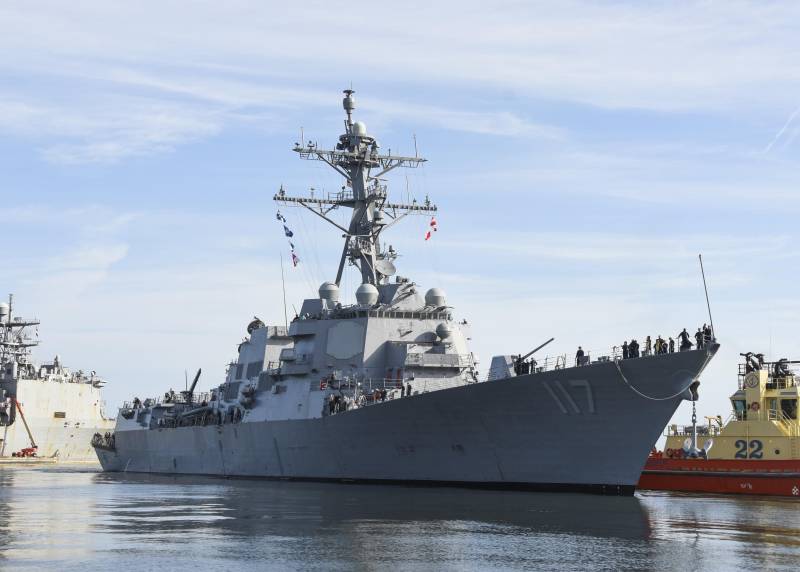 USS Paul Ignatius (DDG-117) destroyer type Arleigh Burke Flight IIA. US Navy Photos
The most significant contribution to the total displacement of the US Navy is made by 11 aircraft carriers - more than 1 million tons. At the same time, they are the basis of the fleet’s striking power and ship groups are built around them. For comparison, the only Russian aircraft carrier “Admiral Kuznetsov” has a total displacement of less than 60 thousand tons, and all this affects the overall performance of the Navy.

The Russian Navy cannot boast of a close number of ships of the first rank. There is only one Peter the Great heavy nuclear missile cruiser with a displacement of 25,8 thousand tons, three missile cruisers, pr. 1164 (11,4 thousand tons), etc. It is a small number of large surface warships that causes serious differences in the total displacement. Unfortunately, it also affects the combat capabilities of the fleet.

The situation is better in the submarine fleet. 10 strategic missile carriers with a total displacement of 10-25 thousand tons and dozens of ships of other classes with less high characteristics - up to the "small" diesel-electric Varshavyanka (3,95 thousand tons) are serving. 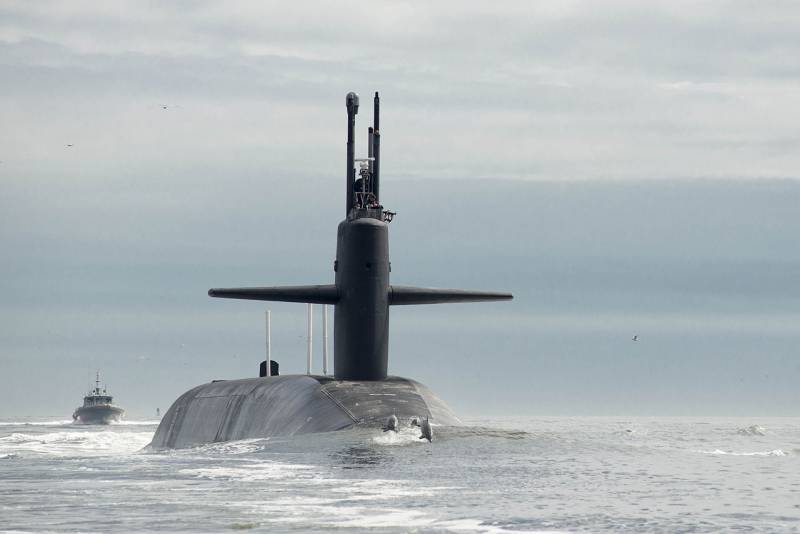 SSBN USS Tennessee (SSBN-734) type Ohio. US Navy Photos
The basis of the combat strength of the Russian Navy in terms of quantity now is small missile ships, corvettes and frigates of several projects. Almost 40 pennants of a modern building are part of all fleets. Despite the small displacement, such ships can effectively solve tasks of shock and defensive nature. They are supplemented by 23 missile boats of an older construction.

It is necessary to take into account the presence of a sufficiently large landing fleet. In total, there are almost 50 large and small landing ships and boats. An important component of the Navy is artillery ships and boats, various minesweepers, anti-sabotage boats, etc.

The situation in the PLA Navy is broadly similar to the Russian one. However, at present, China is able to ensure the mass construction of ships of certain classes, including destroyers. Larger ships, such as aircraft carriers, are also being built, but require considerable effort.

The lead destroyer pr. 055 "Nanyachan". Photo Cjdby.net
Since the beginning of the decade, 11 destroyers of the 052D type were built and handed over to the fleet. Work is underway on the construction of serial ships "055", and the lead one recently began service. There is some experience in the construction of aircraft carriers of large displacement. Nevertheless, while China is losing the United States in some indicators of a quantitative and qualitative nature.

Knowing the approximate plans of the military departments of leading countries, it is not difficult to predict the further development of the current situation. Obviously, certain changes in abundance or displacement will take place, but a cardinal fracture is not yet expected. However, China may again surprise with its labor successes.

The United States in the medium term plans to increase the combat strength by several dozen ships. It is proposed to do this due to surface and submarines of existing classes. Orders for additional units will appear, and the life of existing ones will be extended.

Russian shipbuilding plans will significantly affect overall performance only in the distant future. The construction of aircraft carriers has again been postponed, but this year two UDCs (25-28 thousand tons) will be laid. It is possible to launch the construction of smaller ships of other ranks and classes. 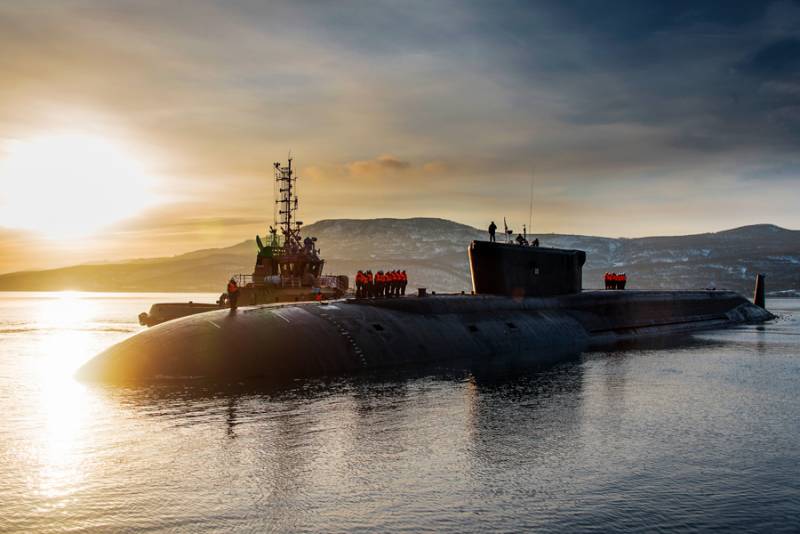 RPKSN "Alexander Nevsky" pr. 955. Photo by the Ministry of Defense of the Russian Federation / mil.ru
The serial construction of several frigates, corvettes and RTOs continues. Work is also underway on new submarines of the main classes. The replenishment of the fleet is expected due to new landing ships and boats, minesweepers, etc. The construction of new ships is already ahead of the process of decommissioning old ones. There are also positive trends in the modernization of ships. Due to this, the total number of combat personnel will grow. Together with it, the total displacement will also grow.

However, even under favorable circumstances, the Russian Navy will still lag behind foreign leaders in some respects. The PRC has come too far in terms of the number of pennants, and the United States with a large margin is leading in total displacement.

It should be noted that the fighting qualities of a ship have not been determined only by its displacement for a long time, and the fleet's potential depends not only on the number of pennants. There are many other factors that can affect combat efficiency and compensate for the lag in table numbers. 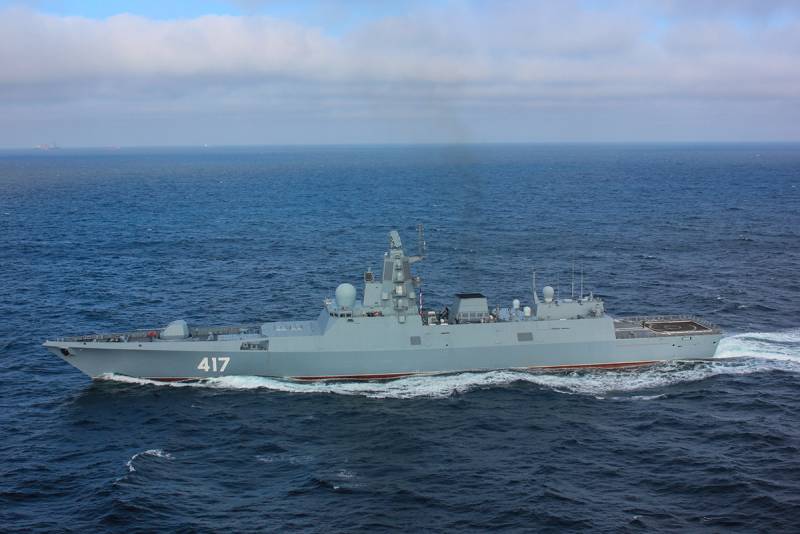 "Admiral Gorshkov" - frigate pr. 22350. Photo by the Ministry of Defense of the Russian Federation / mil.ru
For example, the U.S. Navy has 11 aircraft carriers - not the largest group. However, it is sufficient to work around the world and perform a wide range of combat missions. Even one aircraft carrier with a ship group is a serious force and threat, which is very difficult to counter.

You can also recall the Russian small missile ships, pr. 21631 "Buyan-M" and pr. 22800 "Karakurt". With a displacement of not more than 850-950 tons, they carry eight Caliber or Onyx missiles each and are capable of hitting targets at outstanding ranges. In addition, the appearance of new types of weapons that are compatible with launchers of RTOs is expected. Similar weapons are received by new submarines of several types, thanks to which they also become an effective and formidable fleet tool.

It should be remembered that plans for the development of the fleet are determined by several factors. These are the capabilities of the state, its military strategy and plans related to it. Thus, the United States intends to maintain and maintain the status of the main force in the oceans, for which they require a large number of high-ranking ships. A developed economy and industry can provide a solution to such problems. The situation is similar in China, due to some restrictions, he has so far focused on small and medium-sized ships. 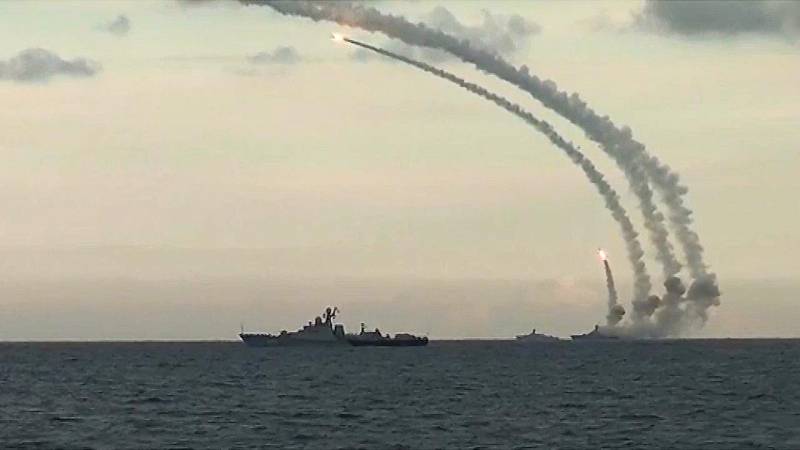 The use of Caliber missiles with small missile ships, pr. 21361 Buyan-M, of the Caspian flotilla, 2015. Photo by the Ministry of Defense of the Russian Federation / mil.ru
The state of the Russian Navy at the moment allows you to protect the country's maritime borders and display a flag in some parts of the World Ocean. A full-fledged presence in remote regions is still a problem and requires further development of the fleet. Due to objective restrictions, industry is not yet able to massively build large ships like the United States or China.

Current plans, formed taking into account the available capabilities and limitations, provide for the construction of submarines of all main classes, as well as ships of rank 2 and 3. Larger projects are already being developed, and their implementation will begin in the foreseeable future.

Thus, now and in the coming years, the Russian Navy will not be a world leader in terms of the number of combat personnel or the total displacement of ships. However, he is quite capable of building up his potential within the framework of the available opportunities and expanding the circle of tasks to be solved. The Navy soberly assesses the situation and prudently relies on quality and efficiency, which depend only to a limited extent on tons and units.

Ctrl Enter
Noticed a mistake Highlight text and press. Ctrl + Enter
We are
USS Abraham Lincoln (CVN-72) aircraft carrier underwent repairs and upgradesAbout the future of underwater robotics
127 comments
Information
Dear reader, to leave comments on the publication, you must to register.