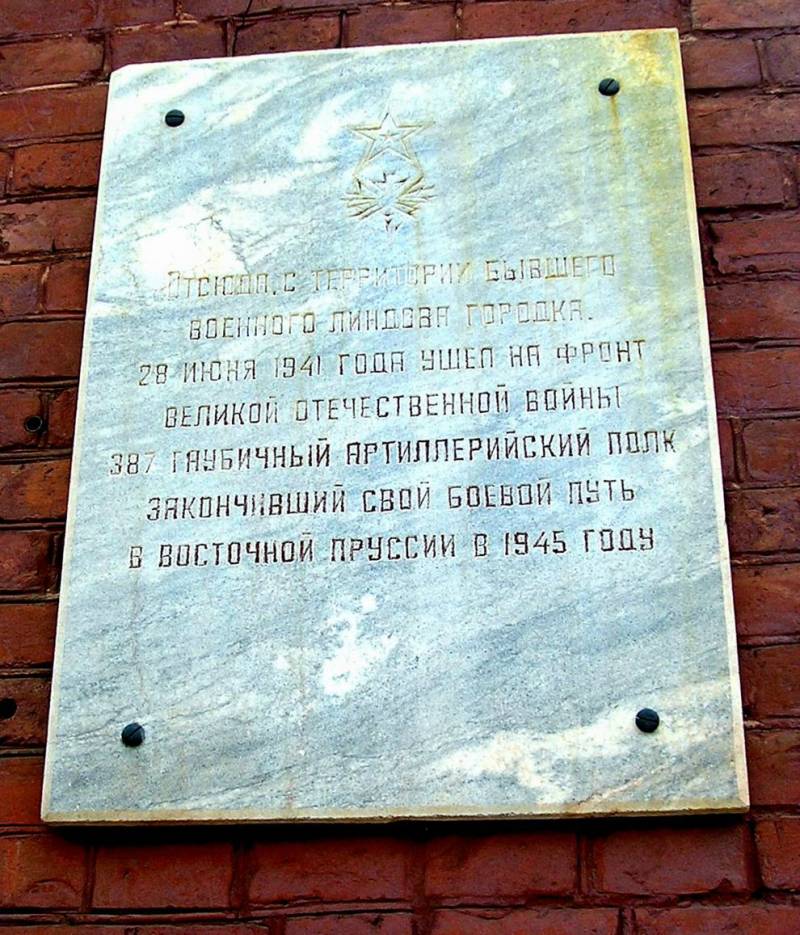 - Mother wrote, was in the war?

- No, I stayed at the headquarters there, as a clerk.
From the movie "Brother"

Could my grandfather Sergei Egorovich have suggested that by the age of 28, when he has work, family, first child, a new test will fall on his lot? After all, it seems that the dispossession of the family in the late 20s and the hungry 30s in the Volga began to be forgotten.

June 22, 1941 the war began. The words of the younger brother Vasily, who served in the 92nd border regiment of the NKVD, who guarded the state border at a site of 215 km along the San river of Przemyshl, became clear. In a letter from his brother, which came a week before the start of the war, there were incomprehensible words until June 22: “Soon” B ”.”

On June 24, Sergey’s grandfather was called up to mobilize in the Red Army, 387 PAP RGK. The peaceful profession of a tractor driver, a farmer came in handy in the war.

On July 20, 1940, by order of the People’s Commissar of Defense, the 387th gun artillery regiment of the RGK was formed in Kuibyshev. It consisted of 4 fire divisions and an AIR division. The regiment was equipped with 1st year Red Army soldiers from various artillery units of the Volga Military District (3rd and 36th LAP, 64th GAP, 248th GAP and others) and new conscripts who arrived mainly from the regions of the Ukrainian SSR, TASSR and Volga Region. Command cadres were also sent from artillery units of PRIVO and arrived from artillery schools. The personnel of the regiment by age consisted of fighters and junior commanders 1919-1921. birth and from people 1913-17. p., used to this deferrals (teachers, students). The regiment was multinational - there were up to 18 nationalities. The regiment commander is Mironov Evgeny Andreevich.

Until June 28, the regiment was mobilized according to the state of wartime and the same day went to the front.

12.07.1941/21/14.07.1941, the regiment took military order on the left bank of the Dnieper in front of the city of Rogachev. The city at that time was in the hands of the Germans. The troops of the 63st Army had the task of driving the Germans out of Rogachev. On the morning of July 20.07.1941, 15, the regiment entered the battle for the first time, supporting the advance of 15 SK. The city was taken. By July 60, 7, the enemy was driven back from Rogachev for 3 km. Fire inflicted great damage on the manpower and equipment of the enemy: 3 armored vehicles were destroyed, up to 22 vehicles, XNUMX NP were destroyed, XNUMX headquarters were destroyed, XNUMX infantry battalions were scattered and defeated, XNUMX artillery and mortar batteries were crushed.

August 1941, the regiment fought in the 13th Army. Making a systematic departure, our units at numerous lines counterattacked the enemy. The regiment on August 28.08.1941, 3, consisting of three divisions, was surrounded in the district of Zapadenki, Pogarsky district, Bryansk region. The 13rd division at that time was already on the eastern bank of the river. Desna supported the defending units of the 100th Army. For two days, the regiment conducted heavy defensive battles surrounded by superior enemy forces, as a result of which up to 15 soldiers and officers were destroyed, one tank and an armored car were destroyed. Shells ran out. The enemy furiously pressed on. The material part had to be destroyed. The personnel organizedly left the encirclement in the district XNUMX km north of Novgorod-Seversky. 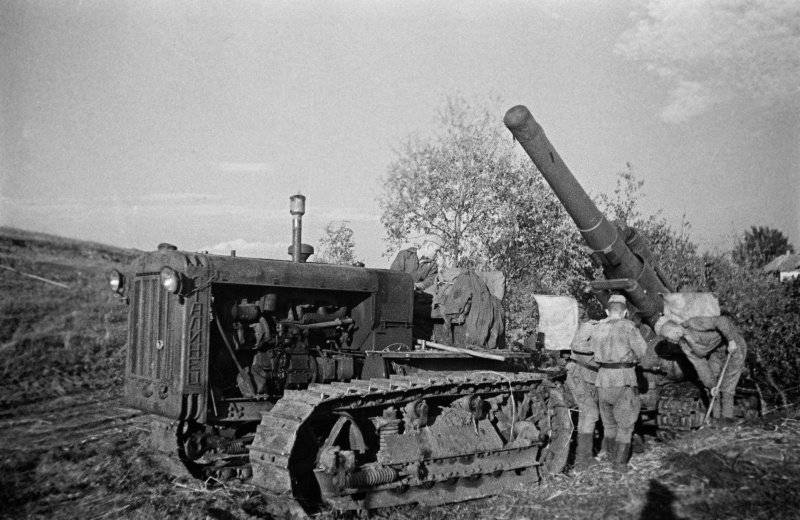 06.10.1941/13/200 the regiment as part of the XNUMXth army was in the rear of the enemy. The Germans were already approaching Kursk and Orel. By order of the Headquarters of the High Command, the regiment in the army was to march XNUMX km behind the enemy’s rear with the task of destroying the enemy’s communications, disrupting communications, destroying his manpower and equipment and connecting with his units. The personnel, performing the task, showed exceptional courage and heroism. Not enough ammo, food. In the conditions of autumn slush and the onset of cold weather, the enemy delivered significant blows.

09.10.41, in the village of Negino, Suzemsky district, a garrison of up to 100 soldiers and officers was defeated.

On the night of October 14.10.41, 200, the regiment suddenly attacked the enemy garrison in the regional center of Khomutovka, where the headquarters of the German division was located. As a result of the attack, up to 150 soldiers and officers were killed and wounded, 7 vehicles, 60 guns with tractors were destroyed and up to XNUMX saddled horses were captured.

Each settlement had to be fought with.

In the vicinity of the village of Teplovka, the regiment connected with the remnants of 6 SD. As a result of the attack, which went into hand-to-hand combat, the calculations of four 75-mm guns were destroyed, two armored vehicles, 40 vehicles, up to 70 cyclists were destroyed, and an ammunition depot was burned.

17.10.1941/6/XNUMX, the regiment, along with XNUMX SD, approached the farm Semenovsky. On the way stood a long column of the enemy, consisting of tanks, cars and artillery. The attack was preparing for the night. It was necessary to make a huge effort to break the enemy standing in front. At night, the column was attacked, the encirclement ring was broken.

Massively began to award medals and orders during the war, mainly since 1943. Firstly, they retreated, although there were enough feats during the retreat, they died, and secondly, there was a lot of confusion and confusion. All the more valuable were the awards for soldiers received during the first years of the war.

From the award sheet of Sergey Egorovich

On October 18, the regiment and 6 SD reached the front line of our defense on the Swap River and connected with their units. Holding back the enemy, the regiment was moving east, in the direction of the city of Livny. Arriving in Livny, the regiment was sent to Vereshchagino, Molotov region for reformation, where it was from 02.12.1941/05.03.1942/XNUMX. March XNUMX, XNUMX

Ahead were still long, hot miles of war.

In March 1942, Sergei Yegorovich, as part of a regiment, arrived on the North-Western Front and participated in battles in the Demyansk area.

In December, the 1942 regiment was turned to the formation of the 76 st separate cannon artillery brigade. 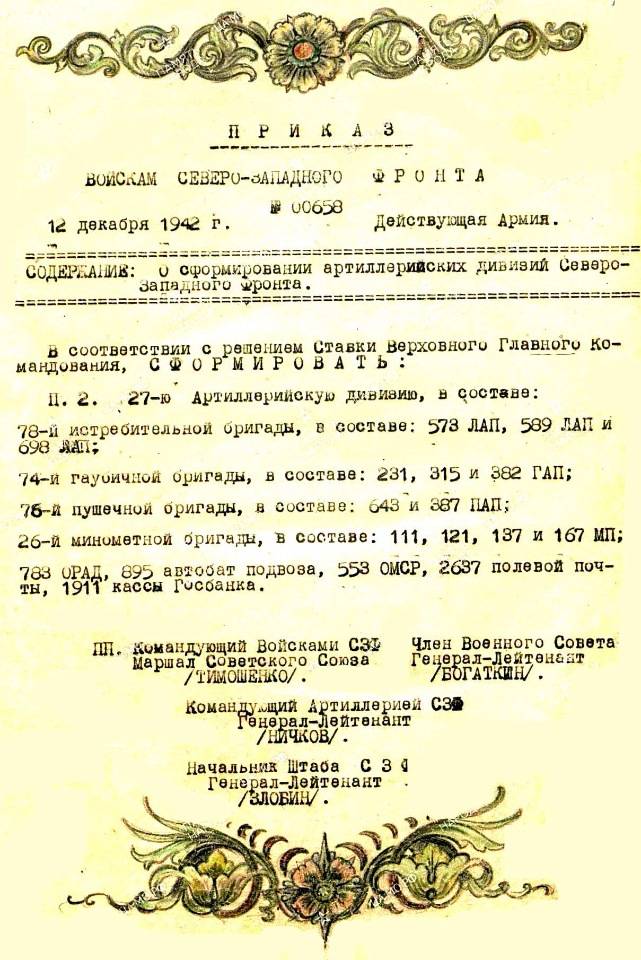 He participated in defensive and offensive battles for the liberation of the city of Staraya Russa and the Starorussky district of the Novgorod region.

In December 1943, he fought in the Nevel region. In January-June 1944 he fought on the Idrinsky, Novosokolnichesky and Pustoshsky directions. In the summer and autumn of 1944, it liberated Latvia, and met the victory in the spring of 1945 in Courland.

During the war, Sergei Yegorovich was awarded the Order of the Red Star, medals "For Military Merit" and "For the Victory over Germany in the Great Patriotic War of 1941-1945."

The younger brother Vasily died in captivity on 17.10.1941/XNUMX/XNUMX. Place of burial: Rivne.

As a guard colonel, he participated in the Berlin operation as commander of the artillery of the 69th Army.

Thank you very much to our grandparents for the peaceful sky above your head!

Eternal memory to those who are no longer with us, and long happy years of life to war veterans! 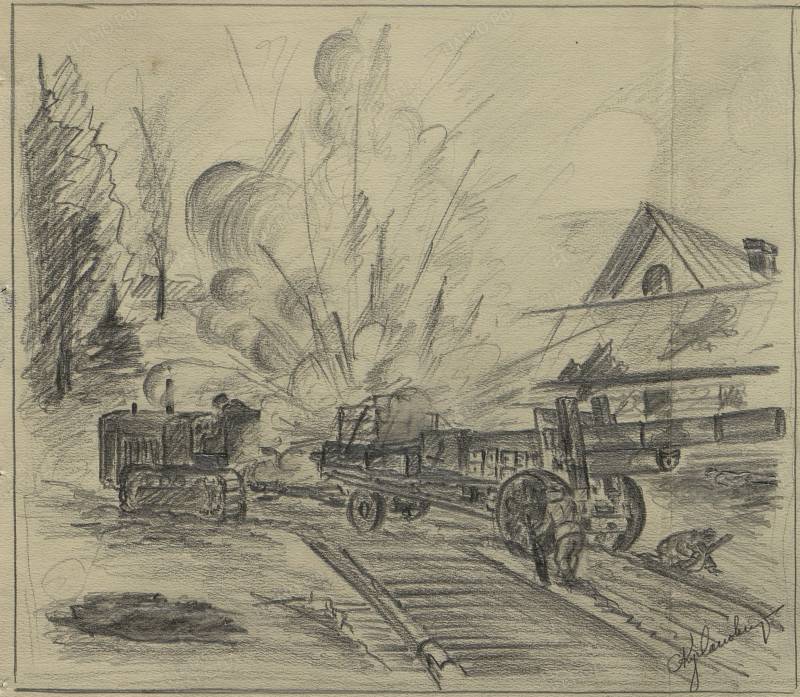 We are in Yandex Zen
Nikolay Lebedev. Thunderstorm Romanian 1st Panzer Division
Thank you for being born!
58 comments
Information
Dear reader, to leave comments on the publication, you must to register.