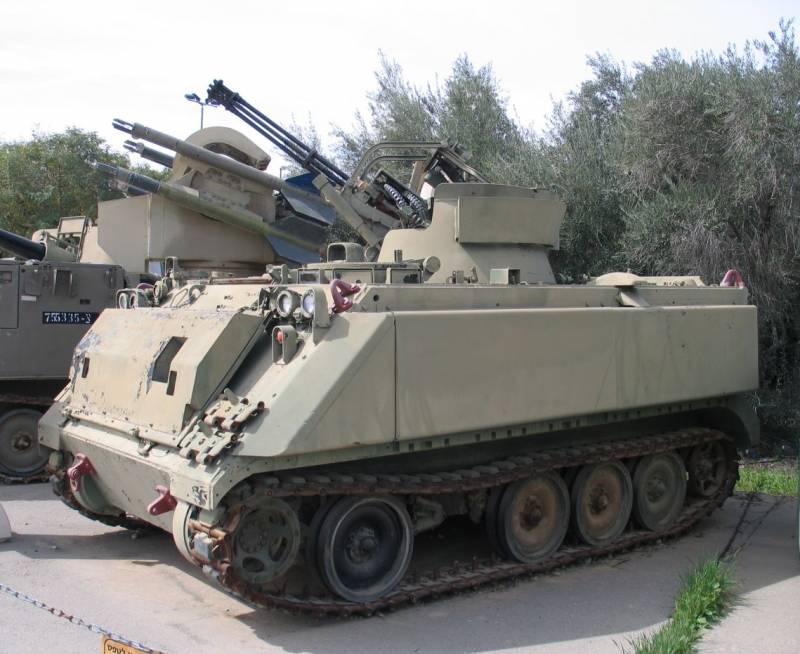 ZSU "Howet", the American M163 in service with the IDF. Wikimedia Commons Photos

Israel is known for its thrifty attitude to military equipment. Outdated samples undergo modernization, which allows you to keep them in service and get the desired results. In the nineties, similar processes were observed in the field of military air defense. The obsolete anti-aircraft self-propelled guns “Howet” were modernized according to the “Mahbet” project. The resulting combat vehicles favorably with the base models.

In the late sixties, the U.S. Army received the latest M163 Vulcan Air Defense System ZSU, made on the M113 BTR chassis and armed with a 20 mm M61 cannon. Soon, such equipment was exported and entered service with third countries. One of the customers of the M163 was Israel. In AOI self-propelled gun appeared in the very beginning of the eighties and received the designation "Howet."

ZSU "Howet" used in all wars and operations since the beginning of the eighties. They were actively used in battles both for their intended purpose and to support the ground forces. On the account of the combat crews, a lot of destroyed targets, including one downed enemy plane. The last combat episodes with the participation of the "Howets" relate to the two thousandth year.

In the early nineties, the United States decided to write off the M163 ZSU due to the final obsolescence and inconsistency with modern requirements. AOI did not take an example from foreign colleagues and kept the Howet in service. At the same time, it became clear that in order to continue the service, this equipment needs to be deeply modernized. 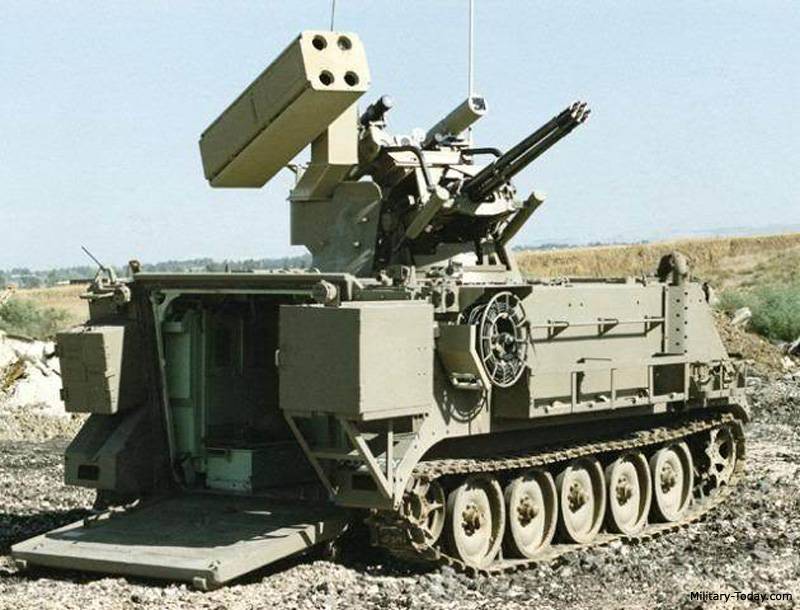 Missile-cannon complex "Mahbet". Photo Military-today.com
The update was supposed to affect the complex of weapons and controls. The terms of reference for the new project required equipping the ZSU with modern optical search tools, a new fire control system, etc. The 20-mm six-barrel gun was proposed to be supplemented with guided missiles. The resulting anti-aircraft missile-gun complex could continue to serve for a long time.

The development of the Khoveta modernization began no later than 1993. Israeli Aircraft Industries (IAI) received an order for the work. She had to find all the necessary units and integrate them into the design of the existing machine without its cardinal restructuring. The modernized ZSU received the name "Mahbet" ("Bat" or "Racket").

When developing a new project, the design of the carrier machine was almost completely preserved. Only a few changes were introduced related to the installation of certain devices. They did the same with the turret and the artillery system - however, in their case, the volume of innovations was greater.

On the tower, above the swinging artillery unit, a whole set of new devices appeared. Blocks of optoelectronic equipment with a day and night channel, as well as a laser range finder, were mounted at the installation. The radar range finder, standard for the M163 / Howet, was deleted.

Developed a new OMS with advanced features. Its main element was the central control unit based on the Intel 486DX / 33 processor. It was made in the form of a secure remote laptop with a monitor, controls, etc. The MSA is interfaced with a satellite navigation system and other devices. There were means of communication capable of receiving target designation. ZSU "Mahbet" were supposed to work in conjunction with the search radar of various types. 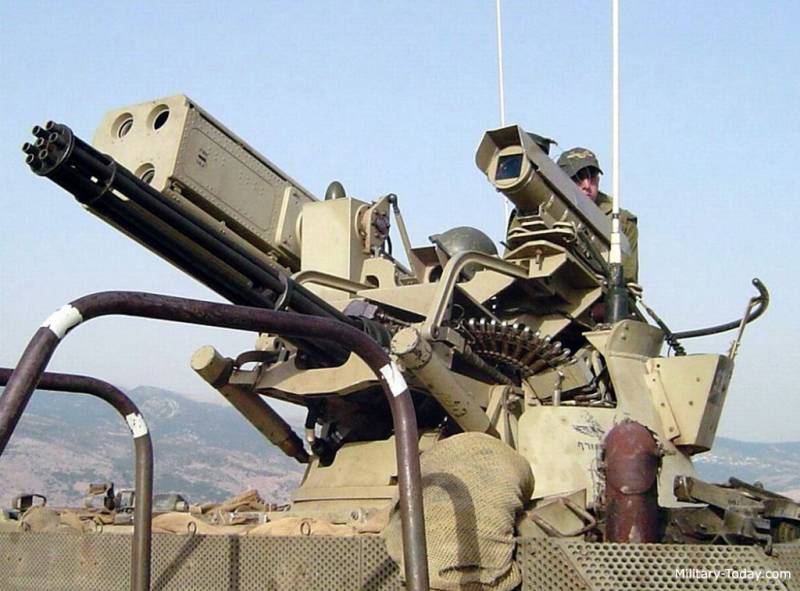 Updated tower close-up. Photo Military-today.com
A new recorder included a video recorder. With its help, it was proposed to record the signal from optical means - for further analysis and analysis of the actions of the crew and the enemy.

The existing gun was supplemented with guided missiles. To the right of the tower appeared a bracket for a launcher for four FIM-92 Stinger missiles. The installation was made mobile, with vertical aiming along with the gun. It was alleged that the appearance of missiles allows attacking several targets at the same time, while the ZHV “Howet” could work only one at a time.

The rearrangement of the internal compartments led to a reduction in the ammunition load of the gun from 2100 to 1800 shells. Missile ammunition - 8 units. Half were transported on the launcher, the rest were located inside the hull. The unit was recharged manually.

The deep modernization of on-board equipment and weapons had a significant impact on the performance characteristics. Dimensions and weight, as well as running characteristics, have not changed. At the same time, the presence of missiles allowed to increase the range and altitude of target destruction. Modern SLA has increased the efficiency of observation and search for targets with their subsequent shelling.

From test to service

The prototype SAM system "Mahbet" was performed on the basis of the serial machine "Howet." Tests of this machine took place in 1997 and did not take much time. The chassis was not modified and therefore did not need to be checked. The tests affected only a new complex of electronic equipment and weapons. 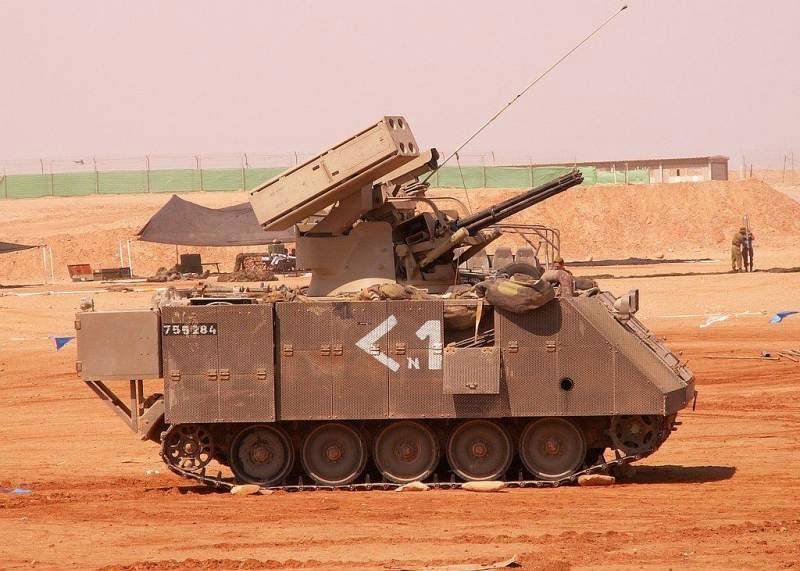 "Mahbeth" with additional reservation. Photo Bukvoed.livejournal.com
The tests did not reveal any serious problems, and IAI received an order for a serial modernization of equipment. Already in 1997, the army was given the first divisional self-propelled guns. The development of equipment by the troops was proceeding at a rapid pace, and at the beginning of 1998 the first division of the ground forces reached combat readiness. During the same year, the equipment of the next division was modernized.

As of the end of the nineties in the Air Force and ground forces of the IDF there were no more than 130-150 ZSU “Howet”. According to the plans of that time, all of them had to undergo repairs and modernization to the state of "Mahbet". In addition, the new project was supposed to be launched on the international market and receive profitable contracts.

However, such plans were only partially implemented. According to The Military Balance, at present, air defense units from the ground forces are armed with only 20 modernized Machbet vehicles. The Air Force continues to operate the old Howet ZSU in an amount of more than 100 units. Thus, the update received only a small fraction of the total number of vehicles. On the other hand, the fleet of equipment of one of the branches of the armed forces underwent a complete modernization.

Plans to enter the international market have not been realized. Foreign operators of the M163 did not want to carry out modernization on the Israeli project. The reasons for this were various factors of a technical, economic and political nature.

At the turn of the nineties and two thousandths, another round of the Arab-Israeli conflict began, and the recently adopted Mahbet air defense missile system went into battle for the first time. Such equipment has been repeatedly involved in combat missions in all operations of the beginning of the two thousandths. 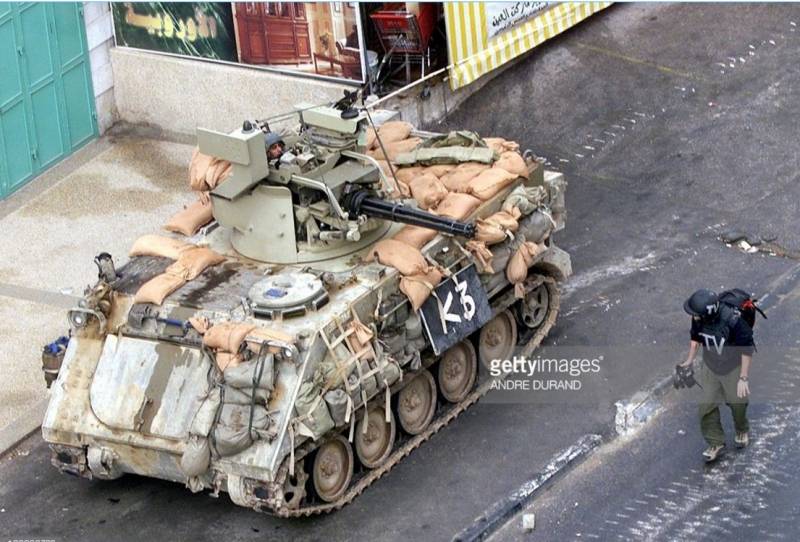 Anti-aircraft self-propelled guns during Operation Khomat Magen, 2002. Missile launcher was removed from the vehicle. Photo Bukvoed.livejournal.com
In those events, the IDF had to deal only with the land enemy, and therefore anti-aircraft self-propelled guns served as rapid-fire fire support systems. As the well-known photographs show, due to the absence of an air enemy, missile launchers were removed from the air defense missile systems, which improved the visibility a bit.

After that, the combat qualities of the air defense system were determined by the M61 cannon and modern SLA. Such a complex has proven to be an effective means to combat ground targets. With its help, it was possible to hit any structures, fortifications and enemy equipment. However, the IDF then did not fight with a well-equipped and trained army.

According to known data, in 2006, the Israeli ground forces carried out a large-scale restructuring of their air defense, as a result of which a lot of units were transferred to new equipment. ZSU and ZRPK recognized insufficiently effective, however, significant quantities of such military vehicles are still in operation.

How long the service of the remaining self-propelled guns "Howet" and "Mahbet" will last is unknown. The practical value of such a technique is ambiguous and generally not related to tasks in the context of air defense. In addition, there are several congenital deficiencies that adversely affect combat capabilities and overall potential.

It can be assumed that over the next few years, the IDF, known for its frugality, will retain the existing two types of anti-aircraft self-propelled guns, and the decommissioning will only affect equipment with a developed resource or unacceptable damage. “Howet” and “Mahbet” can be used in the battles of the future, but in the long run they will definitely be decommissioned due to complete moral and physical obsolescence.