LDNR. Prisoners of war: without the right to life 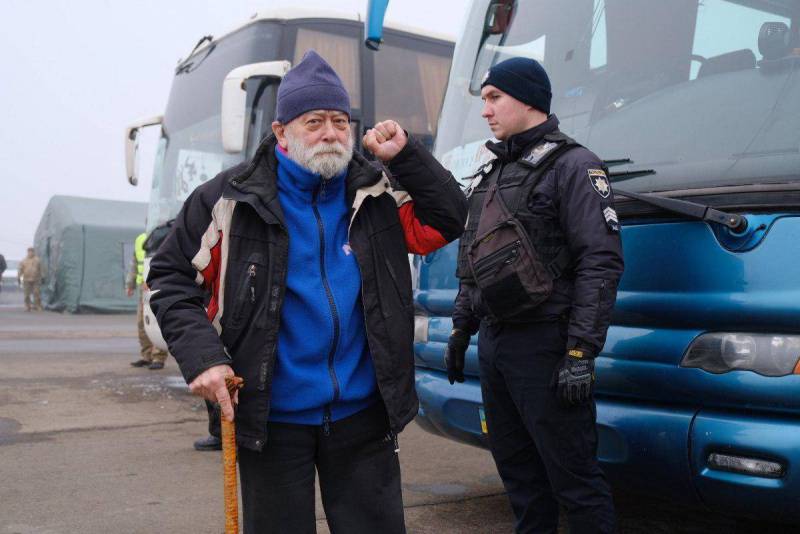 Unfortunately, the not-too-pleasant experience of exchanging prisoners of war in 2017 did not arouse the desire of the LDNR authorities to reconsider their approach to the process of returning to normal life the people who went through Ukrainian prisons and dungeons of the Security Service of Ukraine. Moreover, in 2020 everything looks even more sad, and the results speak for themselves. Despite the increased security, the two released, Daria Mastikasheva and Rafael Lusvargi, fled the hospital. Mastikashev managed to be detained at the border, but Lusvargi was like that ...

All the well-known and affectionate media prisoners of war have long gone home or settled in Russia, but a significant number of those released from captivity are still in dormitories, stuck between heaven and earth. Moreover, in Lugansk, 14 people continue to be in the hospital for unknown reasons, and they are not there for the sake of treatment. It would seem that if there are complaints against them on the part of law enforcement agencies (such precedents happen, alas, with every exchange), the past months should have been enough to decide on their future fate. Nevertheless, no one explains anything to people who have not truly freed, but simply changed the regime of imprisonment.

From the first days after the exchange in Lugansk and Donetsk they categorically stated that there was enough for the liberated and that they did not need any help. Fortunately, the volunteers and simply indifferent people, taught by the experience of the previous exchange, did not believe in these overly optimistic statements and immediately started collecting funds, products, hygiene items and clothing. In the early days, it was extremely difficult to transfer the collected assistance, but in the end, the authorities still allowed to distribute it among those in need. Of course, there was no question of any “full security” - even volunteers bought the SIM cards of the local operator for ex-prisoners of war. Many urgently needed clothes and hygiene items, and hospital nutrition, dietary and, to put it mildly, low-calorie, was clearly insufficient to restore the body after prison.

At the moment, dozens of those released are still in dormitories - temporary accommodation centers. Many survive solely thanks to the help of volunteers and various benefactors. The “lifting” issued in January (10 thousand rubles in the LPR and 20 thousand in the DPR) have long been spent, and the rations that the Red Cross brings once every few weeks are enough just to survive.

The worst part is that many simply cannot go to work, since they have no documents. The process of obtaining republican passports lasted for months and, most likely, as in 2018, it will take at least six months.

Unfortunately, the sad experience of the past exchange did not go in vain. Many recent prisoners of war have lost all documents in a Ukrainian prison, but all that the republic can offer is an address certificate, which is not a full-fledged basis for obtaining a local passport and for which you can neither get a job, nor even get married. Adults, independent people, a significant part of whom are for the first time in LDNR, are forced to sit aimlessly week after week in the hostel, surviving thanks to the help of caring volunteers.

Those who managed to keep a Ukrainian or Russian passport are a little better: they may well get a job to somehow improve their lives (there is more than enough work in the republics now, even with a small salary). Nevertheless, the issue of obtaining a republican passport is also important for them, however, the authorities and the migration service continue to play some strange games ...

In the DPR, the situation is further complicated by the inability to obtain a prisoner of war certificate. Previously, it was issued at the Ministry of Defense, which was disbanded in 2018, but now it turned out that no one in the Corps is ready to take care of this issue, print a few dozen pieces of paper on the printer and print it.

This is surprising, but with people who went through the horrors of captivity, a psychologist did not work a day. Even now, when they have already passed the MGB test and are getting used to a completely new environment, there is no psychological support. Recall, the last time such a practice ended in the fact that several ex-prisoners of war, instead of assimilating in the republics, washed down the bitter and ended up very poorly. Alas, this experience taught no one. As well as other troubles that accompanied the last exchange.

To admit, the feeling is growing that people who are returning from the underworld of Ukrainian prisons for Lugansk and Donetsk are more of a burden than a joy. It is sad, because among them are not only loyal to the Russian world and patriots, but also proven fighters, competent specialists, and sometimes elderly people who need additional help and guardianship.

It is likely that the next exchange will need to involve as much as possible the public, charitable organizations, and preferably the Russian media, which, unlike the republican ones, are not obliged to talk only about positive things. Because officials, oddly enough, do not show willingness and desire to learn from their own mistakes.

Ctrl Enter
Noticed a mistake Highlight text and press. Ctrl + Enter
We are
Situational analysis of the death of the MH17 flight (Malaysian Boeing 777), made on the basis of engineering analysis from 15.08.2014Results of the week. “In our cooperative, the board is always agreed”
11 comments
Information
Dear reader, to leave comments on the publication, you must to register.