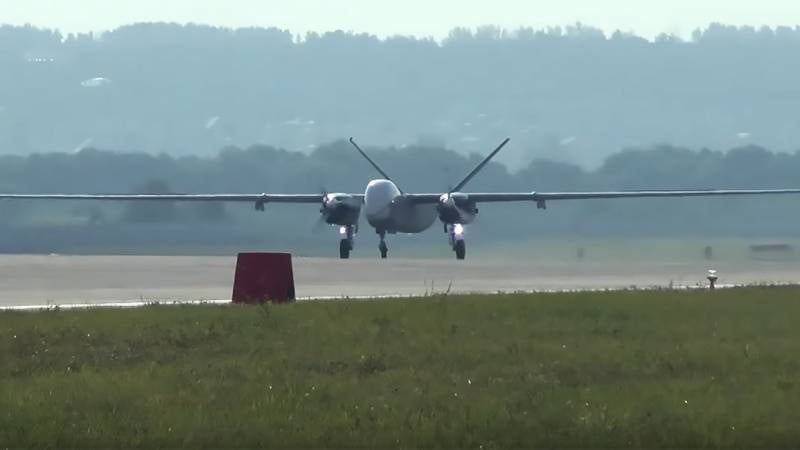 Altius is a heavy Russian long-range drone with a maximum combat load of more than a ton. The UAV made its first flight in August 2019. In February 2020, the official website of the Russian Ministry of Defense announced that the final version of the drone was called Altius-RU. The deployment of the production of a heavy reconnaissance and strike drone is planned to be carried out at the facilities of the Ural Civil Plant aviation, which is currently engaged in development work on this topic.

Altius will teach you how to think

Soon in the arsenal of the Russian Aerospace Forces there will be a new heavy reconnaissance and strike drone Altius, which will receive elements of artificial intelligence (AI). The UAV will be able to operate autonomously without the participation of an operator, as well as independently interact with the promising fifth-generation Russian fighter Su-57. It is reported that a new reconnaissance-strike drone will be able to independently lay a route to a target or a given patrol area without a human operator, bypassing a potential enemy’s air defense zones, and also detect and attack important ground targets: missile launchers, communication centers, and headquarters. An apparatus with similar capabilities is not yet at the disposal of the Russian Aerospace Forces. According to experts, the new drone will become truly universal weapons.

According to the newspaper "News" referring to its own sources in the military-industrial complex, the country has already begun work on the creation of an updated version of the heavy reconnaissance and strike drone Altius-RU. The new drone will receive elements of the AI ​​system, and it will be possible to remotely control the device from the board of the Su-57 fighter. It is reported that all the necessary equipment that the UAV will give its “brains” will be installed on the device until the end of 2020, after which the period of technical testing of the new product will begin.

It is assumed that the elements of artificial intelligence will give the device new opportunities, including the ability to attack ground targets on its own. Having received the coordinates of the target, the UAV using its on-board computer will be able to draw up an algorithm for finding the optimal route to the target of the attack, and also calculate the most suitable point for dropping bombs. The drone will be able to do all this without the help of an operator, while the combat drone will receive all the information from the headquarters in real time on the air situation and the location of the enemy’s air defense facilities and build its flight, processing the incoming information. Having completed the combat mission, a heavy drone will be able to return to the base in automatic mode along the safest route or return to the patrol zone and continue to solve reconnaissance missions. 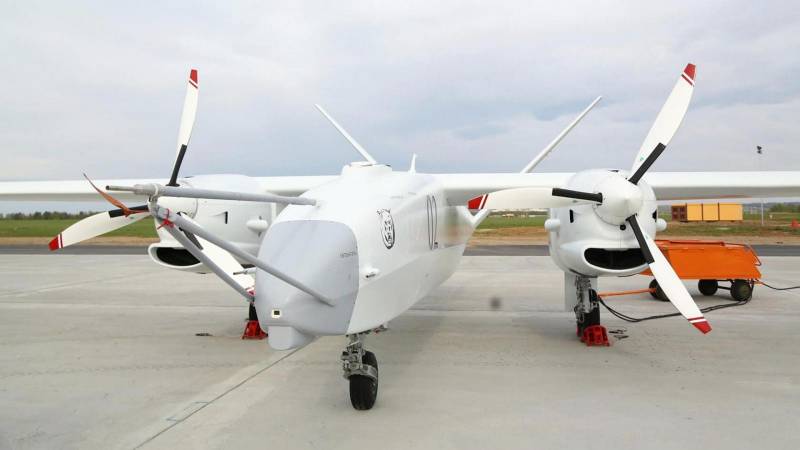 It is worth noting that currently military drones at all stages of the flight are trying to control operators working from the ground. The AI ​​elements installed on Altius should help reduce the load on the operators of unmanned systems, which is especially important for long flights and long patrols. For a large reconnaissance and striking apparatus, this is especially true, since such a UAV is able to be in the sky for more than a day.

Using a drone in conjunction with a modern fifth-generation fighter is also a very important function. In September 2019, the Russian Ministry of Defense for the first time demonstrated an example of such interaction involving the Su-57 and the 20-ton strike drone S-70 Okhotnik, which is currently the largest such aircraft in our country. The Altius UAV will also be equipped with the same opportunity to interact with a manned aircraft. Experts note that thanks to the instruments at his disposal, the pilot will be able to find targets and transmit their coordinates on board the UAV via a secure communication line. After receiving information from the pilot, the drone will be able to proceed with the combat mission in an independent mode without the participation of the operator.

Russian experts note that modern Russian drones, which include "Outpost" and "Altius", are already comparable in their characteristics to their Western counterparts. For example, according to its characteristics, Altius can compete in the global arms market with the American MQ-9 Reaper UAV (Reaper). Moreover, the use of drones in the armies of all countries in the future will only increase. Unmanned aerial vehicles are already showing themselves excellently in reconnaissance missions, allowing them to discover important targets that they can hit on their own. The development, construction and widespread use of reconnaissance and strike drones will help in the long run to save human lives, saving people from unnecessary risk.

Technical capabilities of the Altius-RU drone 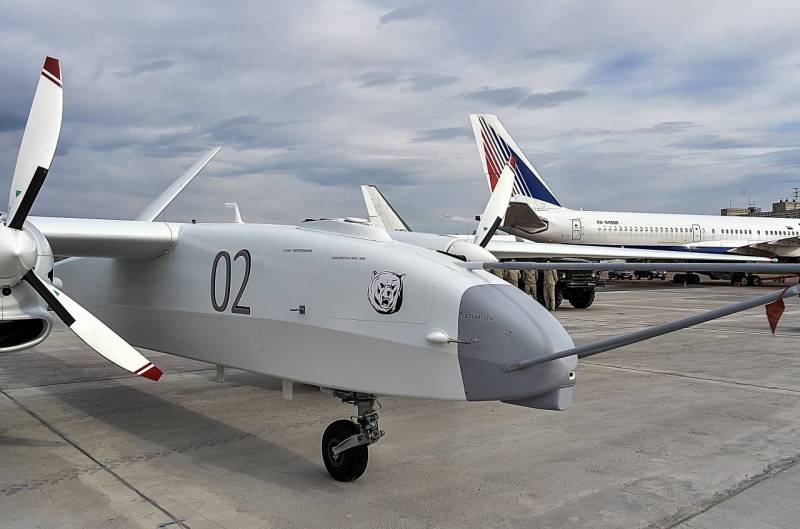 However, today not all the technical data of the drone are still known. For example, in February 2018, the official website of the Ministry of Defense of the Russian Federation reported that the Altius heavy UAV could carry up to two tons of combat load. But today in the press, including on the Zvezda’s thematic website of the Ministry of Defense, more and more often you can find other data on the payload of the device - up to 1000 kg.

The new Russian unmanned aerial vehicle Altius is built according to the classical aerodynamic design with a highly located wing of a large scope and a V-tail. It is known that Altius was built with the wide use of composite structural materials. The power plant of the apparatus is represented by two turboprop engines located on the wing consoles, the engines drive two pulling screws. Apparently, we are talking about VK-800C engines developed at the Klimov Design Bureau. This engine is designed for installation on light aircraft and helicopters (VK-800V version) and produces a take-off power of 800 hp. The approximate wing span of the UAV is up to 30 meters, length - about 12 meters, take-off weight - more than six tons.

In 2019, the UZGA plant introduced a revised version of the unmanned vehicle, which received a satellite communications system. Using such a system, the Altius UAV flight range is limited only by the fuel supply on board. According to experts, the emergence of such a system allows reconnaissance and strike drone to conduct reconnaissance and attack targets at a distance of hundreds or thousands of kilometers from their home base. It is known that Altius can be in the sky from 24 to 48 hours, and its maximum flight range should be 10 kilometers. At the same time, the apparatus will be able to conduct reconnaissance from a height of 000 thousand meters.

The device’s features also include its equipment with the SP-2 inertial navigation system, which should reduce the possibility of detecting the device in the air, providing the UAV with additional resistance to induced interference and operation in the conditions of electronic countermeasures from the enemy. It is assumed that as an armament the drone will be able to carry Grom-2 planning bombs with a total mass of 598 kg (warhead weight of 480 kg) and a launch range of 10-50 km or Grom-1 guided missiles with a launch mass of 594 kg (warhead weight 315 kg) with a launch range of up to 120 km. This assumption was put forward by Izvestia journalists. 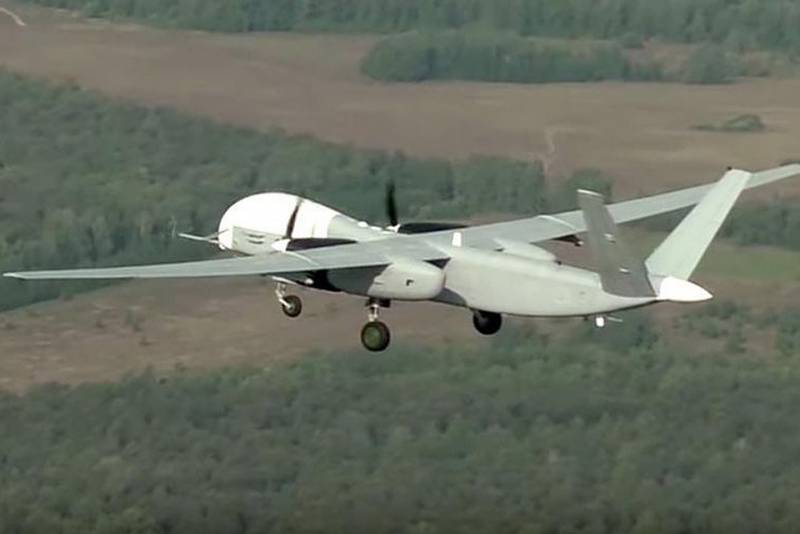 Altius has been created for nine years

Altius is classified as heavy drones; it is one of the three large shock drones currently being developed in Russia. At the same time, Altius is an apparatus of a very complex fate. Work on it began back in 2011, but nine years later the device was still not put into mass production, and the entire process of its development was accompanied by various problems and a scandal, the echo of which has been walking around Kazan so far.

Initially (in 2011), an order to develop a heavy unmanned vehicle weighing up to five tons was issued to specialists of JSC Simonov Research and Development Bureau in Kazan. The work was carried out jointly with Transas from St. Petersburg. The first public demonstration of the model of the future drone took place in February 2013. At that time, the drone was called "Altair".

Then the project suffered two blows at once. The first is the sanctions introduced against Russia in 2014, which left the device without German diesel aircraft engines, which it was planned to equip all drones. Information about the start of flight tests of experimental samples appeared only in 2016, and in 2017 it became known that the Simonov Design Bureau is experiencing a shortage of funds for the completion of the project and continued work.

This was followed by a second blow. An immortal Russian plot has come into play. In April 2018, the court arrested the Director General of OKB. Simonov Alexander Gomzin, whom the investigation suspected of embezzlement of 900 million rubles allocated for the development of a heavy drone. This история not over yet. At the same time Design Bureau them. Simonova is in danger of bankruptcy, and at the end of 2019 the Moscow Arbitration Court accepted the lawsuit of the Russian Ministry of Defense against the former developer of the Altius UAV - JSC NPO Experimental Design Bureau (OKB) named after Simonov "totaling 643,8 million rubles. 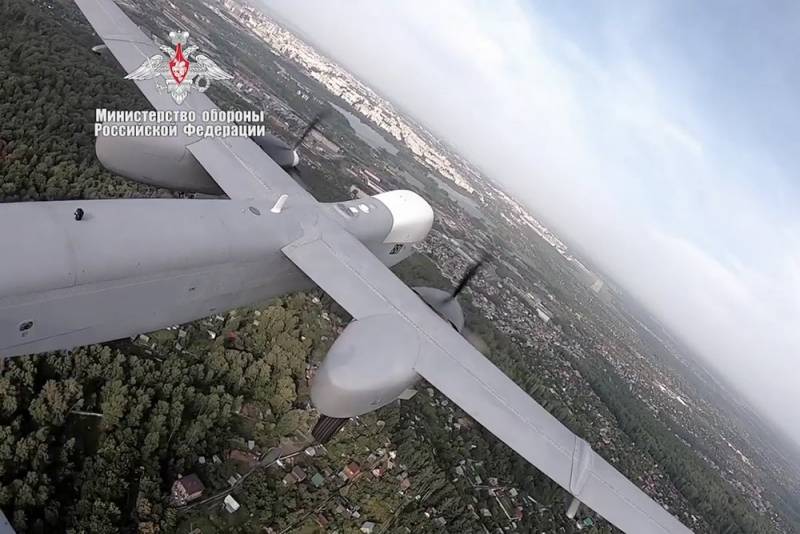 Against the backdrop of the scandal and the ongoing trial, the development of a new drone was moved from Kazan to Yekaterinburg. In December 2018, during a visit to Kazan, Alexei Krivoruchko, who is the Deputy Minister of Defense of the Russian Federation in charge of the logistics of the armed forces, said that work on the heavy drone was transferred to a new contractor. Which was the Ural Civil Aviation Plant (UZGA), which mastered the serial assembly of the Forpost drone, as well as its localized and modernized version of Forpost-R.

In December 2019, the Russian Ministry of Defense signed a new contract with UZGA JSC for the development of design and experimental work on the Altius-RU unmanned aerial vehicle. This is the final version of the UAV, to which the military and developers came up with the results of all tests of prototypes of a heavy drone already released. It is reported that this version will combine all the requirements of the military and the latest Russian achievements in the field of creating unmanned aircraft. This version should become the main one for the deployment of mass production and deliveries to the Armed Forces of the Russian Federation. It is planned that it is Altius-RU that will enter service not only with the Russian Air Force, but also with the Russian Navy.

We are in Yandex Zen
The present and future of unmanned aircraft. Part of 1
An-12 in Afghanistan
88 comments
Information
Dear reader, to leave comments on the publication, you must to register.