Case 2020: a socialist weekend in a capitalist state 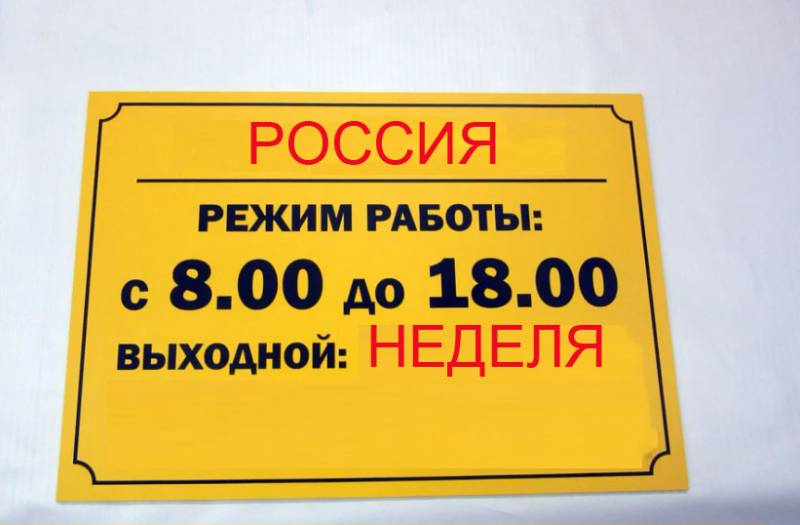 In today's address by the head of state, which was dedicated to the situation with coronavirus in Russia and the world, words were expressed that a Saturday was announced as a non-working week in Russia on Saturday, March 28. Moreover, such a measure, apparently, should be regarded as a measure to counter the spread of the disease. Not taking into account the fact that non-working time is in many respects different from the time spent under strict quarantine, it is proposed to discuss what “non-working week” is in general in a market economy.


It should be recalled that the state rushed to a market economy during the collapse of the Soviet Union and continues to solve this problem today. In addition, it should be noted that in a market economy, the state itself is estranged from influencing economic leverage so as not to be accused of “command-administrative system” and “state regulation of the liberal sector”.

In such circumstances, a strange situation is indicated: if the state has unambiguously decided on the course towards building capitalism and the thesis “there is no return to socialism,” then to whom and how can the state “bestow” non-working time? Representatives of any business, including microenterprises for sharpening can openers or baking biscuits, of course, would gladly accept the message: a weekend with wages. But who, under the conditions of the mentioned construction of capitalism, will this grinder with a baker pay this salary? State? A grinder and a baker hardly believe this, as do thousands of other people who know what private business is. Those who are still more do not believe the owner a grinding workshop or the same FE "baking" - you can’t release employees without payment, there is a responsibility, including human ... Release with payment? - but where to get the payment later, if it needs to be earned by the production of goods, but there is no one to earn. And in the grinding workshop there is no own oil well ...

Strangeness, incident: the state is trying to operate with socialist slogans, previously proclaiming the mentioned impossibility to return to the socialist model. The case when you need to either "put on your underpants" or "remove the cross", but again tried to combine ...

The state is positioning itself socially by all means, but it’s better not to position it, but to be one.

Well, for compatriots who still have the opportunity to relax for a week, we must be glad.

Ctrl Enter
Noticed a mistake Highlight text and press. Ctrl + Enter
We are
About Stalin and KhrushchevWhat you didn't want to know about England
340 comments
Information
Dear reader, to leave comments on the publication, you must to register.