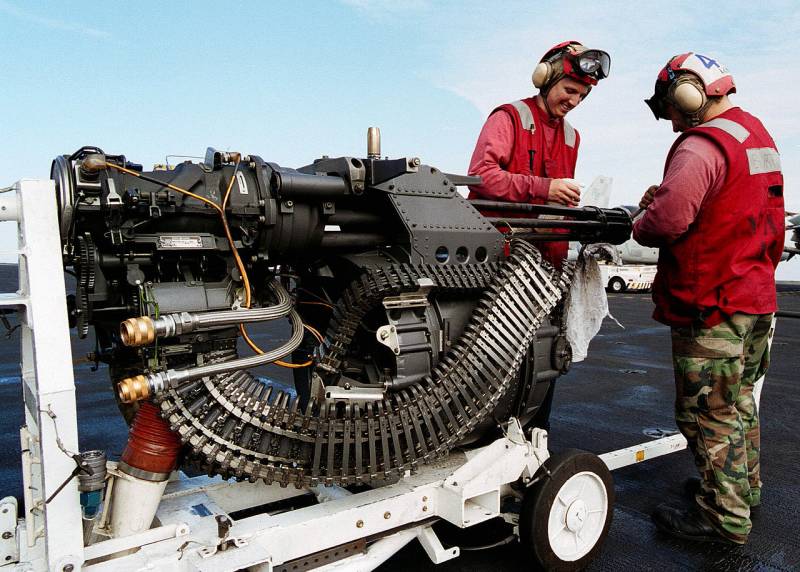 In 1959, the U.S. Air Force received the latest automatic gun M61 Vulcan. Soon, her improved version of the M61A1 appeared, so far becoming the main example of its class. After several decades, another modernization took place, the result of which was the product M61A2, again noticeably different from its predecessors.

The M61A1 automatic gun was installed on all 4-generation American fighters. It is carried by F-15, F-16 and F-18 aircraft of various modifications. However, the prospects for such weapons in the context of the further development of tactical aviation turned out to be foggy. The ATF program, during which the future 5th generation F-22A Raptor fighter was developed in the nineties, presented new requirements.

In terms of combat qualities, the M61A1 met the requirements of the ATF program, but its other features did not fit into them. First of all, there were claims to the mass. The artillery system "Volcano" assembly weighed approx. 250 pounds (112 kg), which exceeded the limits of the new project. There were also some other complaints.

It was decided to develop a new gun under the designation M61A2. Weight should be reduced by 25% - to 200 pounds (approx. 90 kg). The fighting qualities needed to be maintained at the same level. In its design, the M61A2 should not be different from the M61A1, which made it possible to ensure compatibility with existing and promising aircraft. 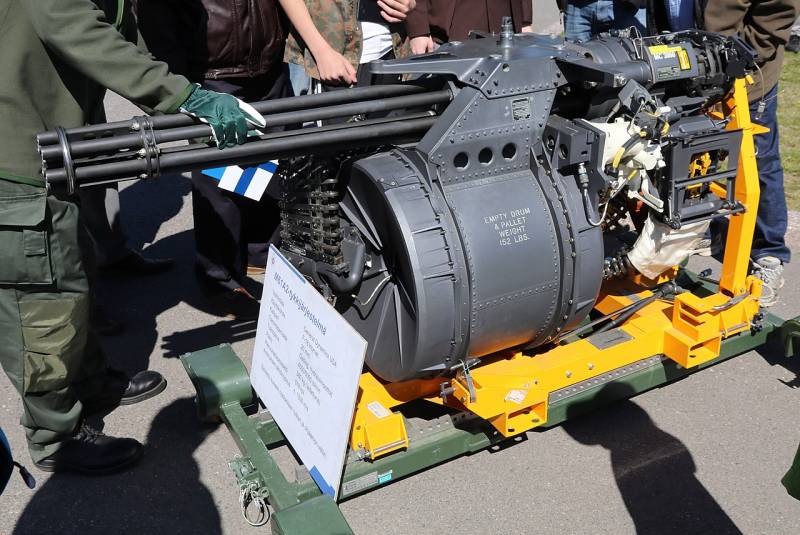 The M61A2 project provided for the preservation of the existing architecture, operating principles and other design features of the existing M61A1 gun. It was proposed to reduce the weight by reworking individual components and assemblies, replacing materials, etc. Such changes affected both the gun itself and the drum-based ammunition system.

The mass of the gun itself was reduced due to a significant alteration of the barrel unit. The regular shafts were replaced with products from another alloy and with a smaller wall thickness. The length of the trunks remained the same - 1827 mm, the cutting has not changed. Due to new materials, the resource of the barrel unit has grown to 250 thousand shots. Other characteristics have also changed.

Significant changes were made to the storage and supply system for shells. The mass of metal parts was replaced with plastic counterparts, with the exception of only elements experiencing heavy loads. Some of these parts were made of lighter alloys. Drives and some other units have not been finalized. Drum capacity - from 412 shells 20x102 mm, depending on the type of carrier aircraft.

According to the results of such processing, the mass of the artillery system in the assembly was reduced to 202 pounds - approx. 92 kg The body of the gun is approx. 32 kg, for ammunition - less than 60 kg. 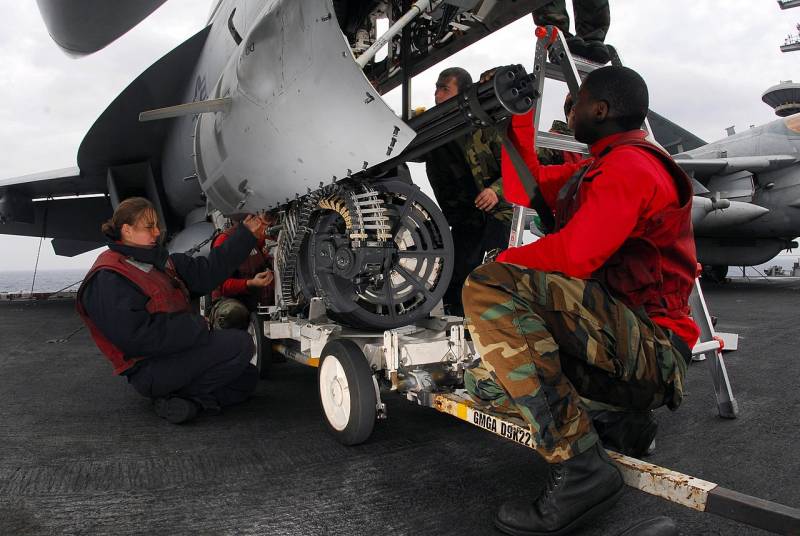 In the process of dismantling the M61A2 gun from the F / A-18E / F fighter
Reducing the mass of the barrel unit allowed to increase the speed of rotation when firing. Thanks to this, the technical rate of fire increased to 6600 rds / min. The standard control system, as in the previous version, allows you to set the rate of fire from 4000 rds / min. to maximum values.

The production of lightweight guns M61A2 started in the late nineties, and soon the US armed forces received the first aircraft with such weapons. The first carrier of the gun was supposed to be the Lockheed Martin F-22A Raptor fighter, developed for the Air Force. Later it was decided to integrate it into the armament complex of the new Boeing F / A-18E / F Super Hornet aircraft for Navy carrier-based aircraft.

It was the F / A-18E / F that became the first aircraft with the M61A2 on board to begin service. This was facilitated by the complexity of developing a 5th generation fighter, which caused a delay in the work. The promising Super Hornet completed testing in 2000, and in September 2001 the first squadron on such aircraft reached its initial operational readiness. Together with the aircraft, a modernized cannon entered this stage.

To date, more than 600 F / A-18E / F fighters with M61A2 automatic guns have been built. Serial guns were manufactured by GD Ordnance and Tactical Systems through several consecutive orders. The Navy ordered from dozens to hundreds of new products at a time. Most of the guns and their carriers remained in the United States. A number of fighters were sold to Australia and Kuwait. 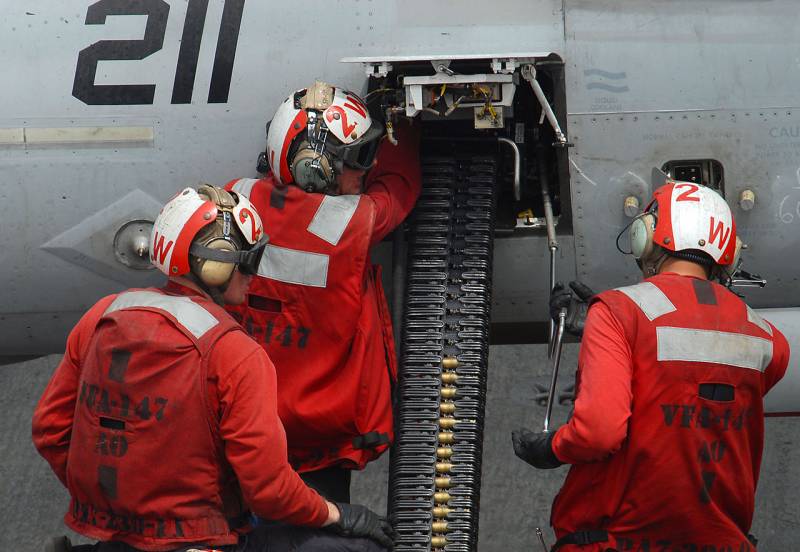 Ammunition loading
The contractor is currently manufacturing cannons under a contract from August 2019. The U.S. Department of Defense has ordered 66 M61A2s worth more than $ 20 million. 34 guns are intended for US Navy aircraft. The rest is planned to be transferred to Kuwait for installation on its F / A-18E / F. Work and delivery will last until 2023 inclusive.

In the first half of the two thousandth, the tests of the F-22A fighter were completed and mass production began. The new aircraft, as originally planned, were equipped with M61A2 guns. The first squadron equipped with such equipment reached its initial operational readiness in December 2005.

Serial production of the F-22A continued until 2011. A total of 8 prototypes and 187 combat vehicles were built. To equip such fleet less than 200 M61A2 guns were required, and a certain supply of guns and separate units for them was also needed.

At its core, the M61A2 cannon is a modified version of the previous M61A1, corresponding to the special requirements of some aircraft projects. In this case, it was a question of only two promising aircraft, which affected the further progress of work and the observed results.

To date, according to various sources, no more than 1000-1200 M61A2 guns have been manufactured - this amount was enough to equip two models of fighters and create a stock of stocks. Production continues, but orders remain small, and new shipments include only dozens of guns. 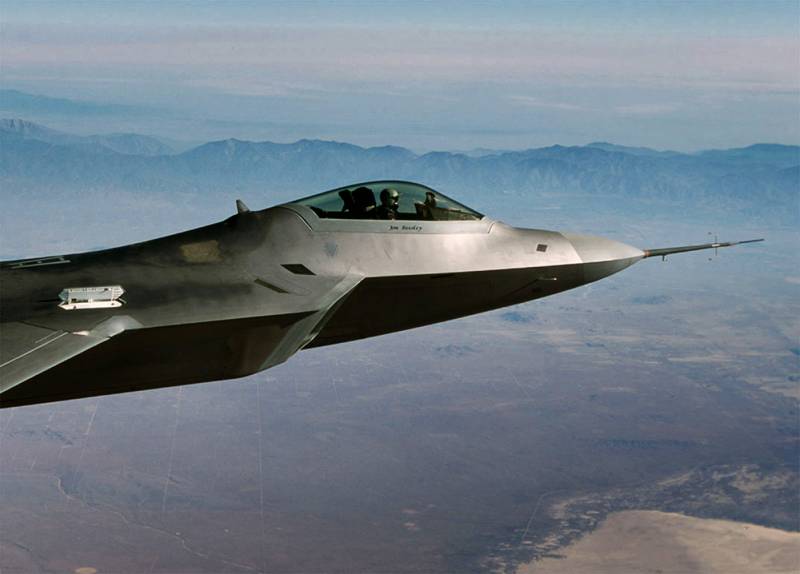 F-22A fires. To reduce visibility, the gun port is equipped with a movable cover (white element on the center section surface)
The future of the M61A2 in the context of production is directly related to the construction of F / A-18E / F carrier-based fighter aircraft. As long as such aircraft go off the assembly line, GD Ordnance and Tactical Systems can count on new orders. The production of F-22A fighters has long been curtailed, and the next F-35 received a gun of a different model.

However, in the context of operation, everything looks much more optimistic. In the United States and other countries, several thousand aircraft with cannons of the Vulcan family serve. Basically, these are the older "heavy" M61A1; the number of active "lungs" M61A2 barely exceeds 800 units. However, the equipment is in operation and will remain in service for a long time. It is unlikely that during this period the command will consider rearmament and replacement of artillery.

What will happen in the future is unknown. The Pentagon discusses the creation of new tactical aircraft, and from time to time various data are published on this light. The problem of airborne guns remains unsolved. However, it cannot be ruled out that in the future, the M61A2 will find a new carrier.

In general, the M20A61 2 mm automatic gun is an original solution to the urgent problem associated with the development of aviation technology. In connection with the advent of a new generation of fighters, requirements for airborne guns increased, and the industry responded by processing the existing design. However, there was no need for the mass introduction of such weapons, which led to the curious results now being observed.

Ctrl Enter
Noticed a mistake Highlight text and press. Ctrl + Enter
We are
South African UAB and CD family "Raptor" for the operators "Mirage" and "Gripenov": Argentina "in transit"Strategic bomber "Avro Vulcan" (England)
72 comments
Information
Dear reader, to leave comments on the publication, you must to register.