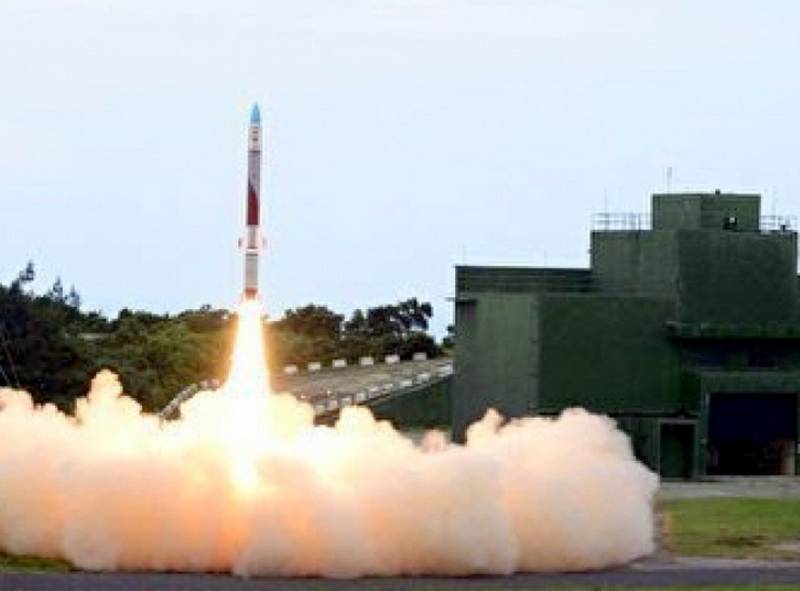 Yunfeng rocket launch is the only known photo of this kind

Since its inception, the Republic of China (Taiwan) has been wary of attacks from the People's Republic of China and has been constantly modernizing its armed forces. One of the last steps in this direction was the adoption of the new Yun Feng cruise missile. This product has been developed since at least two thousand years, and in 2019, after many years of waiting, it entered service.

The Yunfeng project (Cloud Peak) was officially announced for the first time in 2012, but work began long before that. According to some estimates, the development of a new rocket weapons became a direct result of the so-called The third crisis in the Taiwan Strait (1995-96). However, the work encountered certain difficulties, and the desired results were obtained only at the end of the tenth years.

The missile was created by the Zhongshan Institute of Science and Technology, the leading scientific and design organization of the Ministry of National Defense. The work was carried out in an atmosphere of strict secrecy. Also taken measures to conspire events. For example, flight tests of Yun Feng products were conducted “under cover” of testing a Hsiung Feng III rocket, already known to a potential enemy.

According to reports from past years, the Yunfeng missile was supposed to go into service in 2014-15, but this did not happen. Moreover, in 2016, there were reports in the Taiwanese and foreign media about a possible termination of the project. It was assumed that such a decision Taipei wants to show Beijing its peacefulness. However, the Taiwan Ministry of Defense soon denied such reports and indicated continued work.

In early 2018, there were reports of further development of the Yun Feng rocket. As part of the project with the Qilin code, it was proposed to modernize the product and increase the flight range. It was also planned to study the issue of using the Yunfeng product as a launch vehicle for small spacecraft. The cost of the Qilin project was estimated at 12,4 billion Taiwan dollars (approx. 390 million US dollars).

In August 2019, the Ministry of National Defense announced the launch of the production and operation of new weapons. For the army, 10 self-propelled launchers and 20 Yun Feng cruise missiles were ordered. Work on the Qilin project is also ongoing. The first tests of the modernized missile are scheduled for 2021.

According to known data, the Yun Feng product is a supersonic cruise missile (in some sources it is mistakenly referred to as a ballistic) vertical launch missile capable of hitting ground targets at ranges up to 1500 km. In the near future, it is expected to create new modifications of such weapons with enhanced characteristics and fundamentally new capabilities.

The missile is built in a cylindrical body with a revitalizing head fairing (probably discharged when the main engine starts). The wing is folding; the tail set of rudders at start is in the unfolded position. The missile is equipped with guidance systems of an unknown type. Dimensions and starting weight of the product are unknown.

Yun Feng is equipped with a solid propellant rocket engine, providing the descent from the launcher, the rise to a given height and acceleration to the required speed. Upon reaching the specified parameters, a ramjet marching engine is switched on. With its help, the rocket develops a speed of the order of 1000 m / s.

Starting and marching engines consistently provide a rise to a considerable height, where the main part of the trajectory lies. In the target area, the rocket begins to decline. Such a flight profile can reduce losses in air resistance and in a certain way increase range. In the existing configuration, this parameter reaches 1500 km.

To hit targets, an armor-piercing high-explosive warhead weighing 225 kg is used. This type of warhead is characteristic of anti-ship missiles, but nothing is known about such capabilities of the Yun Feng product.

Yunfeng is launched from a ground-based launcher. Initial plans included the deployment of fixed installations in the mountainous parts of Taiwan, but they were later canceled. Modeling of combat situations showed that such objects are at great risk and can be quickly destroyed by the enemy. In this regard, the missile system was made mobile. 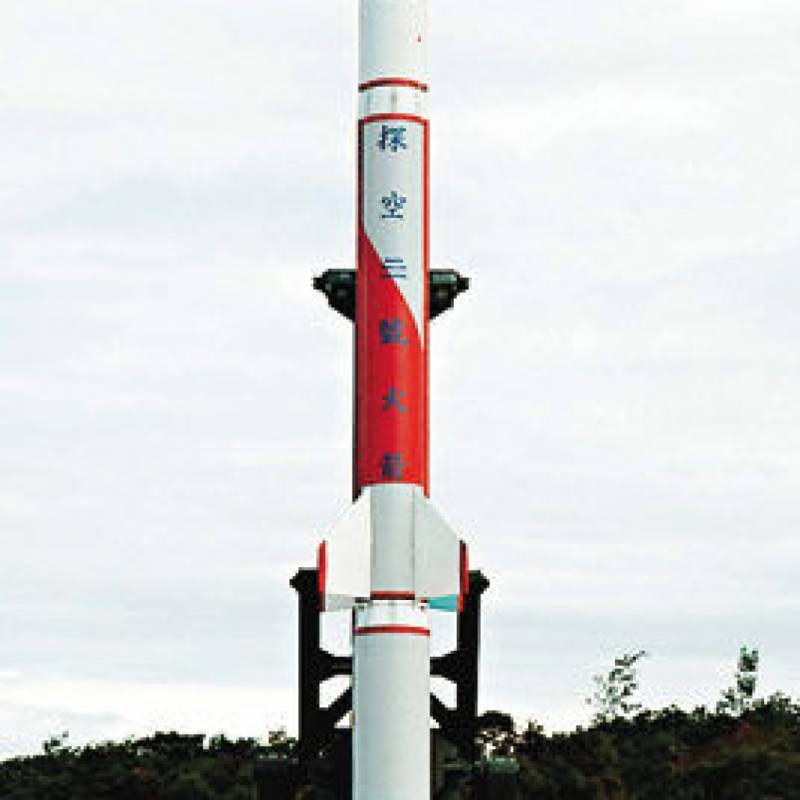 Part of the body of the product, the junction of the rocket and the starting engine is visible
It is reported that the launcher for Yun Feng is being built on the basis of a five-axis special chassis and carries only one missile. Also, probably, the complex includes other cars for various purposes. It is assumed that the placement of the complex’s assets on self-propelled chassis will increase mobility and reduce the risks of an enemy’s strike.

For several years, work has been ongoing on the Qilin project, which has two main goals. The first is the improvement of the power plant to improve the flight performance of the rocket. After this modernization, Yunfeng is expected to be able to hit targets at ranges up to 2000 km.

Upgraded weapons can also become a launch vehicle. In this configuration, a cruise missile will have to deliver cargoes weighing 50-200 kg into low Earth orbits up to a height of 500 km. Obviously, obtaining such capabilities is directly related to the increase in flight performance, which is the main goal of the current project.

Last summer, the Taiwan Ministry of Defense announced the launch of the production of new weapons. An order has been placed for 10 mobile launchers (possibly together with other means of the missile system) and 20 first-party Yunfeng missiles. According to foreign media reports, a new order is planned or already implemented. In total, in the foreseeable future, the army wants to get 50 missiles of a new type.

In its current form, the Yun Feng complex is a very interesting strike system with fairly broad combat capabilities. Open data suggests that the new Taiwan missile could be a serious threat to mainland China in the event of a conflict. However, the full potential of such a threat cannot yet be realized.

The range of the Yunfeng product in the basic version is 1500 km. This means that such missiles, depending on the launch point, are capable of hitting targets in China at a depth of about 800-1000 from the coastline of the Taiwan Strait. The mass of military objects of the PRC, including of strategic importance.

Mobile execution of the complex makes it difficult to detect and timely defeat by the forces of one or another military branch. A cruise missile is capable of speeds of approx. 1 km / s, which becomes a serious challenge for enemy air defense. The 225-kg warhead is capable of hitting various ground targets that do not have special protection.

In the foreseeable future, the appearance of a modernized missile with a range of up to 2000 km is expected, which will become a new challenge for China. Even Beijing, with understandable strategic risks, can fall into the coverage area of ​​such a product.

However, the new Taiwan missile should not be overestimated. Its real potential is seriously limited by quantity. So far, only 10 launchers have been ordered, which is not enough for a massive strike against all the main goals of a potential enemy. In addition, the question of the breakthrough of air defense of mainland China remains open. The PLA has developed defense means that can timely detect and hit all launched missiles.

Taiwan is seriously afraid of possible aggression from the PRC and is preparing its armed forces for an open conflict. One of the methods for building up military power is to create new types of weapons, such as the Yun Feng cruise missile. Duty of such complexes will begin in the near future and is expected to have a beneficial effect on the country's overall defense capability.

For a number of objective reasons, the Yunfeng complexes will not become a “miracle weapon” capable of alone preventing possible aggression or delivering a powerful retaliatory strike and ending the war. Nevertheless, in this case, the project is of great interest - like other independent development of Taiwan in the field of rocket technology.

Ctrl Enter
Noticed a mistake Highlight text and press. Ctrl + Enter
We are
The global crisis and the “yellow threat” led to the arms race of the countries of the Asia-Pacific Region. Part of 3Memo to mercenaries in Africa
5 comments
Information
Dear reader, to leave comments on the publication, you must to register.