Plague, typhoid, malaria and cholera: allies of death in the Caucasian wars 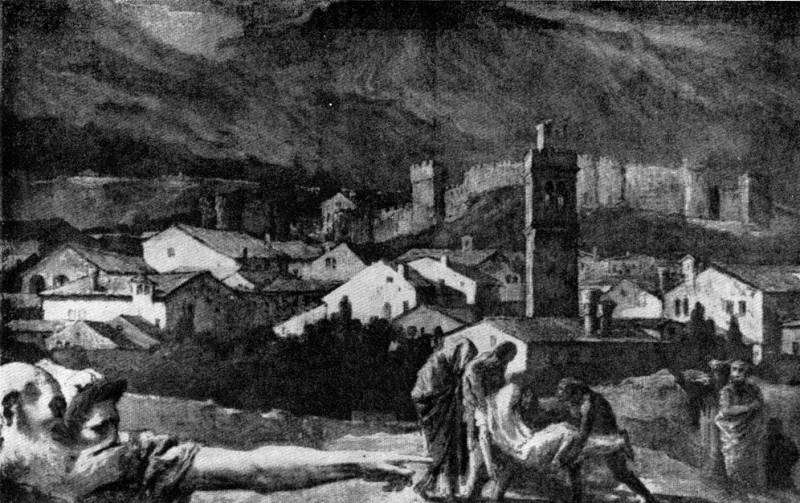 These days, when the mysterious coronavirus is raging almost all over the world, and especially in the information field, many experts are asked many questions. What are the causes of the pandemic? Are we exaggerating the danger of the virus? Why has Europe found itself in such a difficult situation, despite decades of victorious comments on the level of medicine, pharmaceuticals and social security? And all this is crowned with the ridiculous phrase “the world will never be the same”, although the world is always the same.


But the main question is only what internal (currently imperceptible) processes are taking place in the world. And with what losses all geopolitical players will come out of the viral hype. And since история Since this is a policy that has been overturned into the past, some events related to epidemics that have already taken place should be recorded. It is difficult to find a more colorful place in terms of population than the Caucasus, as well as a more politically open region.

A plague on all your mountains

The Caucasus is extremely specific climatically and epidemiologically. Once, Emperor Nicholas II himself planned to build a summer residence in Abrau, but he had to abandon this idea because of the “hectic climate”, which was destructive for the children of the sovereign. In fact, the epidemiological situation in the Caucasus in past centuries was extremely difficult. Plague and cholera, typhoid fever and various types of fever (including malaria), etc., raged here. But, of course, the greatest changes both in the composition of the population and in the political map were made by “black death”.

There were three plague pandemics on the planet. The first, Justinian's plague, raged in the middle of the 6th century throughout the entire Mediterranean. A second plague pandemic raged in Europe in the mid-14th century. The last time the "black death", born in China, wiped people off the face of the earth already at the beginning of the second half of the 19th century. At the same time, sporadic plague epidemics between pandemics regularly shook the Caucasus. 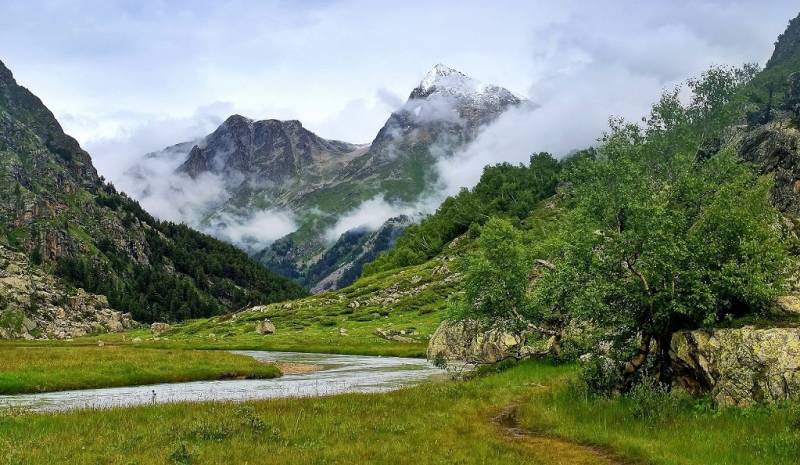 In 1706, 1760, 1770 and 1790, a series of plague epidemics swept through the Caucasus, mowing the inhabitants of villages and villages in the valleys of the Kuban, Teberda, Jalankol and Cherek. Many settlements after the epidemic were no longer recovering, so in almost every region of the Caucasus you can find gloomy legends about the "black village", from which no one left the world. Deadly, but localized epidemics were raging in large populated areas. For example, plague outbreaks swept through Mozdok in 1772, 1798, 1801, and 1807. The plague epidemic of the 1816-1817s struck a vast area of ​​the modern Stavropol Territory, the Karachay-Cherkess and Kabardino-Balkarian republics. At the same time, outbreaks were regularly recorded in individual villages and cities, even such as Kizlyar and Derbent.

Currently, there are five relatively active foci of plague in the territory of the North Caucasus: the Central Caucasian highland, Tersko-Sunzhensky, Dagestan plain-foothill, the Caspian sandy and the East Caucasian highland. All these foci are different in activity and morbidity of the infection.

The war and her friend are an epidemic

It is noteworthy that the outbreaks of epidemics were both the result of the intensification of hostilities and the reason for the start of these same hostilities. So, Lieutenant General and Director of the Military Topographic Depot Ivan Fedorovich Blaramberg believed that several successive plague outbreaks in the North Caucasus in 1736-1737 were a direct result of the Russian-Turkish war of 1735-1739, when the Turks actively cooperated with some peoples of the Caucasus. That is why quite reasonable suspicions arose periodically that the Turks deliberately introduced the disease into territories close to the Russian Empire, because the epidemic could easily spread to Cossack villages.

Another dope for the plague epidemic was the Russo-Turkish War of 1768-1774. Then the epidemic swept not only the Caucasus and Moldova, but also reached Moscow, where a real plague riot broke out. 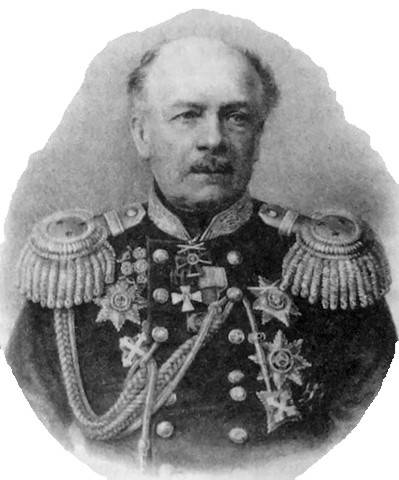 Ivan Fedorovich Blaramberg
But a major epidemic that swept over the Caucasus in 1790, itself became a dope to intensify hostilities. The contradictions between tfokotlya accumulated over many years (peasant farmers, one of the most powerless and poor castes of the Circassian society) of the Abadzekhs and Shapsugs and their own aristocracy after the plague broke out only intensified. The peasants, having experienced the impact of the epidemic, could no longer tolerate the hardships of extorting the nobility.

As a result, the Circassian aristocracy was expelled from the territory of the Abadzekhs and Shapsugs by the Tfokotli, depriving them of land and property. At the same time, the Bjedugs (Bjeduhs), neighbors of the Abadzekhs and Shapsugs, remained faithful to the ancient customs and their princes, preserving the feudal system. Moreover, the Bjedug aristocracy was hospitable to the emigration of the Shapsug and Abadzekh nobility to their lands. A new war was brewing, the apogee of which was the Battle of Bziyuk.

At times, epidemics in alliance with the war completely erased from the historical and cultural scene the once viable sub-ethnic groups occupying fertile soils. Thus, the Khegayks and even Zhaneevites, who during their heyday could put up to 10 thousand soldiers, including cavalry, were finally weakened and completely assimilated by the neighboring peoples.

It is generally accepted that the periodic epidemics that destroyed the population of the North Caucasus became "allies" of Russian troops in the fight against hostile mountaineers. But this conclusion does not hold water. Firstly, the interaction between the Russians and the Highlanders was always extremely close and far from always hostile, so the outbreak of any disease from one side or another responded as a disaster for everyone.

Secondly, even during active hostilities, the plague fettered the movement of Russian troops. For example, General Alexei Alexandrovich Velyaminov, conducting long bloody campaigns for laying the roads of the empire, was sometimes forced to abandon the traditional purchase of provisions from the local population and forages near plagued villages due to the plague. This slowed down the troops and claimed many soldiers and officers. And if the infection penetrated into the ranks of the troops, then the troops burdened with a swollen infirmary would even go on the defensive or were forced to retreat. 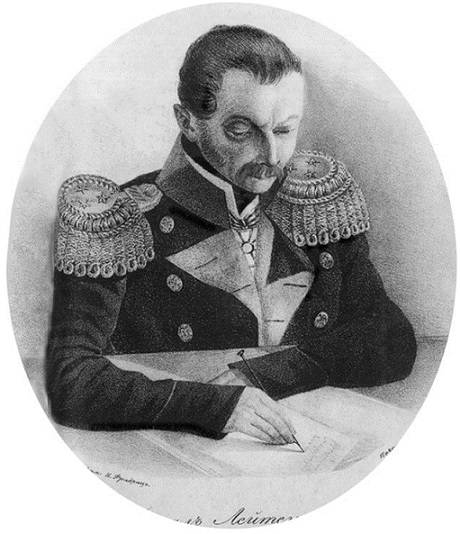 Alexey Alexandrovich Velyaminov
Thirdly, the systematic fight against deadly diseases in the Caucasus began precisely with the arrival of Russian troops. In 1810, in connection with the constant outbreaks of plague epidemics throughout the Caucasian cordon line from Taman to the Caspian coast, a network of "quarantine yards" extended in the Kizlyar region. Their duties included not only not letting the disease pass through the borders of the empire, but also introducing quarantine between ethnic groups of the local population. So, at the beginning of the 19th century it was the “quarantine yards” that had to forcefully separate the Abaza villages, infected with the “ulcer,” from the Nogai auls.

So, if the plague was someone's ally in the Caucasian War, then only death itself.

Not one plague alone

However, the plague was by no means the only scourge of the Caucasus. The most diverse types of fevers and intestinal infections mowed down the ranks of both Russians and highlanders. Numerous floodplains, rivers with swampy shores and standing reservoirs filled the air with clouds of malaria mosquitoes and miasms. More than half of all patients in the hospital suffered from malaria in the Caucasus. The main methods of combating “swamp fever” were improving the nutrition of personnel, strict observance of sanitary and hygienic standards and quarantine measures. Sometimes it was impossible to physically observe all this, so the basis of salvation was often the only medicine - quinine (powder from the quinine tree), which was added to decoctions or wine.

Such intestinal infections as typhoid fever or dysentery were not inferior to their positions, although cholera was also found. Sometimes outbreaks occurred due to the fault of the fighters themselves. For example, after a long half-starved raid on Old Shemakha (now Azerbaijan) in 1830, the “Tengins” (fighters of the Tenginsky regiment), famous for their stamina, pounced on fruits, which the region was rich in, and water from irrigation canals. As a result, in less than five months, due to typhoid fever, the regiment lost five hundred people. 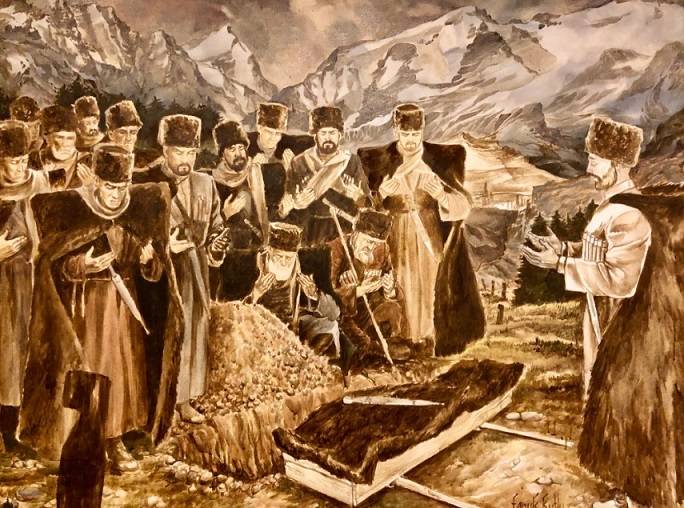 Major General Augustus Wilhelm von Merklin recalled how, after the capture of the village of Dargo, as a result of the famous Dargin campaign, soldiers, exhausted by battle and starving, pounced on unripe corn and water of not even the first freshness. As a result, "the infirmary was very full."

All this led to terrible consequences. The doctors who themselves quickly fell victim to infections were in short supply, and the functions of paramedics fell on everyone who could stand on their feet. Healthy fighters, however, were forced to take on all the duties of the sick, so they sometimes simply did not have time to comply with hygiene requirements and soon, of course, replenished the company in the infirmary.

Discipline and quarantine: all recipes are as old as the world

Hygiene and quarantine measures on paper are amorphous and vague. In practice, everything was more complicated and tougher. For example, the salvation for the already mentioned Tenginsky regiment was the appearance in its ranks of Lieutenant Colonel Tikhon Tikhonovich Lisanevich. This officer, limping due to injury, was already a Caucasian veteran by the age of forty, and with extraordinary energy took up an attempt to stop the epidemic of "Lankaran" fever and cholera, which rages both among the "Tengins" and throughout the Caucasus of the 1830s. Separately, it is worth noting that Lisanevich had to act in the complete absence of experienced doctors due to their shortage in the entire region.

What did a professional military man do without medical skills almost two hundred years ago? To begin with, he broke up an infirmary separately from the rest of the garrison, which was immediately taken under strict guard of guard from all directions. It was forbidden to consume any raw vegetables or fruits. The infirmary was kept perfectly clean. If the patient's pulse was weakening and the temperature dropped, then he was immediately put in a hot bath, and then rubbed with cloth towels and vodka with vinegar. At the same time, only a special team could communicate with patients, whose clothes were immediately sent to boiling water. 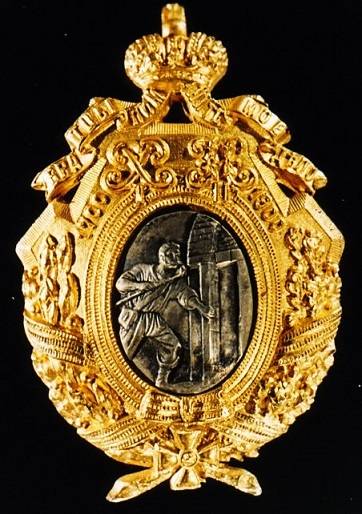 Breastplate of the Tenginsky regiment. The feat of Arkhip Osipov is depicted in the center
Every five minutes, patients were given a tincture of half a teaspoon of soda, a tablespoon of lemon juice or vinegar and boiled water. A healthy garrison, in the morning before going to work, was supposed to have hot meals, regardless of the desire of the eater, and a portion of vodka infused with various medicinal herbs. Separately, a special order was issued for all officers in the regiment of Tikhon Tikhonovich, who read:

"To reassure the lower ranks so that they are not afraid of this disease, because fear is more effective in this case to the disease."

The result of Lisanevich’s inhuman efforts was the salvation of over 50% of the sick garrison in the complete absence of medical personnel and bringing the regiment into a combat-ready state. Almost two hundred years have passed since then.

We are in Yandex Zen
Chernobyl notebook. Part of 3
The hunt for the Blackbird
8 comments
Information
Dear reader, to leave comments on the publication, you must to register.