Ukrainian Ochakov may become the operational base of the US Navy 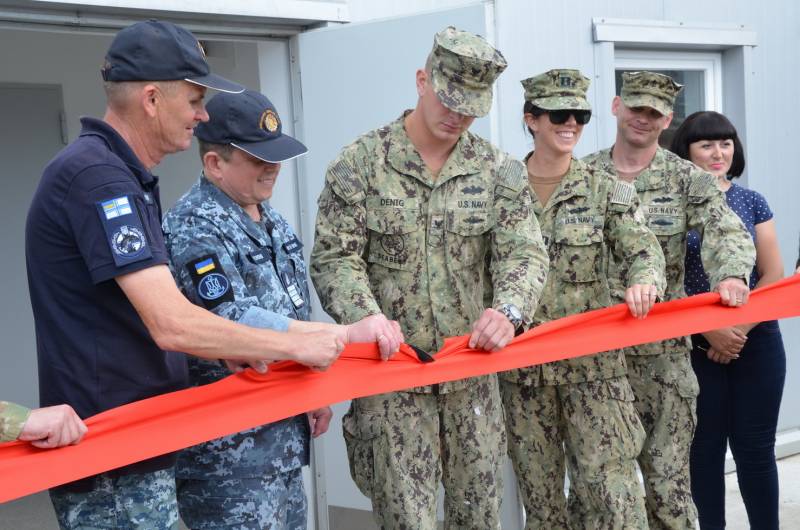 Apparently caused a lot of noise in the domestic media by the US military, the construction of the base of the Navy of the Armed Forces of Ukraine in the city of Ochakov, Nikolaev region, apparently, was basically completed. However, the question remains - for what purpose was it conducted and for solving exactly what tasks are the overseas “partners” and “non-downstream” curators going to use this facility?


The boisterous activity that the military of the first mobile construction battalion of the United States Marine Corps (NMCB 1), the so-called Seabees (Sea Bees), developed in a small Ukrainian town, was not pure charity. The guys from the Pentagon are not like that, to engage their own subordinates in such a distance from the United States without at the same time pursuing some far-reaching plans.

So, even the “reconstruction of the facilities necessary for the full implementation of the Sea Breeze series exercises, in which the United States military has always taken part, is hardly an exhaustive explanation of the need for the naval builders suffered in Ochakov. As a matter of fact, the main, apparently, stage of work there was completed last summer. The Americans completed and commissioned the Ukrainian side the main object - the building of the operations center, and finishing work was already underway at the boat maintenance facility. What's next?

But then, apparently, the fun began. Lieutenant Spencer Bull, an officer in the subsea construction division involved in the project, said that activities in Ochakovo would continue. At the same time, he clarified with military frankness that his team of divers would not only work to strengthen existing piers, but also, much more interestingly, “draw up a map of the seabed to make sure that large ships could moor there.” Also, the Americans intended to find and map out a suitable place for the construction of the "planned by the project" floating dock.

These moments somehow very successfully coincided with the statement made by the then Minister of Defense of Ukraine Stepan Poltorak. The general said with great pride that from now on, "ships of the Navy of the North Atlantic Alliance will permanently call at the ports of Ukraine." According to him, the corresponding agreement was reached during the meeting at NATO headquarters in Brussels, in the format "Ukraine and the Alliance’s defense ministers." Therefore, what do we have in the end?

Initially, the impression was that all the fuss was being done in order to create an inconspicuous base for special operations of American "fur seals", the 73rd naval center of special operations of the Ukrainian Navy deployed in the same Ochakovo (combat swimmers) could well be a cover for their activities on foreign territory . However, now we can talk about the prospect of a wider range of military presence fleet USA in Ukraine. Most likely, since we were talking about “big ships”, over time, a full-fledged operational base for him could be created in Ochakovo.

Given the distance to the coast of Crimea, which is less than 100 kilometers, it is very promising both tactically and strategically.

By the way, in favor of this assumption there is a mention that after the completion of work in Ochakovo itself, the Americans intended to carry out the construction of dormitories in Nikolaev. Allegedly for the military personnel of the Ukrainian Navy. However, this version raises deep doubts. Rather, we are talking about preparing places for the deployment of their own military, in case they come to the "non-winter" in large enough quantities.

All this taken together indicates that, at least in the middle-end of last year, the Pentagon had very specific plans for the Ukrainian direction. And since they began to invest their own resources and resources in their implementation, it would be naive to assume that these plans would be easily abandoned - even in the current difficult circumstances.

We are in Yandex Zen
Situational analysis of the death of the MH17 flight (Malaysian Boeing 777), made on the basis of engineering analysis from 15.08.2014
Strangulation: the context, conduct and consequences of the American naval blockade of China
64 comments
Information
Dear reader, to leave comments on the publication, you must to register.