Russian Arctic: the new life of the Northern Sea Route 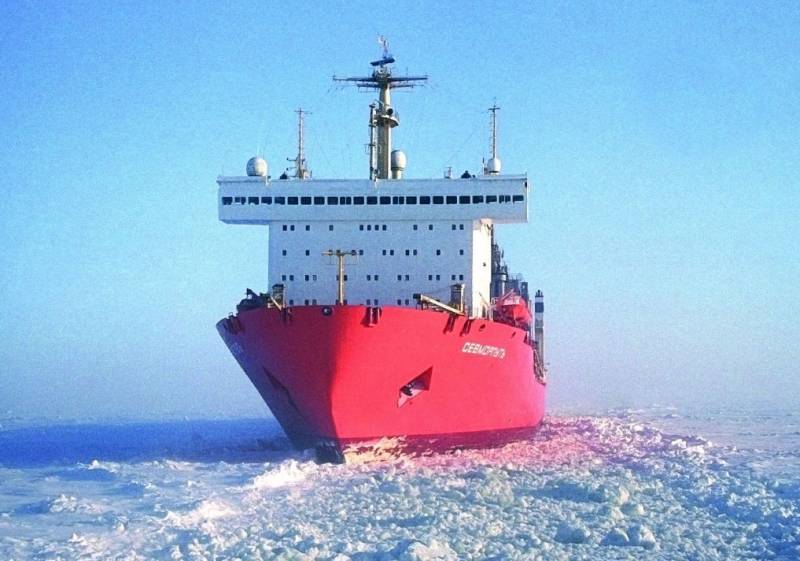 At the end of last year, the Russian government approved a plan for the development of the infrastructure of the Northern Sea Route (NSR) until 2035. The document was prepared in the development of the President’s Address to the Federal Assembly, in which Vladimir Putin determined the immediate prospects for the NSR - by 2024, increase freight traffic to 80 million tons.

For the development of the Russian Arctic

This is a very ambitious goal. The volume declared by the president is ten times more than the speed of the NSR in Soviet times (6,6 million tons). True, then it was achieved mainly due to the so-called northern delivery, when fuel, food, industrial and construction materials were delivered to the Arctic ports for residents of the region.

Now the tasks are of a completely different order. Putin formulated them like this: to ensure "the development of the Russian Arctic, the regions of the Far East" and make the Northern Sea Route "a truly global, competitive transport artery."

This is already being implemented. For example, the Soviet-era traffic volume was exceeded back in 2016. Last year, the Northern Sea Route cargo turnover reached 31,5 million tons. As the directors of the NSR specified, the growth to the level of 2018 amounted to 10,4 million tons. It is mainly provided by an increase in the shipment of liquefied natural gas from the port of Sabetta. It handled 20,5 million tons of cargo.

The second largest (7,7 million tons) was the Arctic Gate at the Kamenny Cape. He started working in 2016 and then shipped 4,5 million tons of Novy Port brand new oil from the Novoportovskoye oil and gas condensate field. Since then, terminal shipping has increased by more than 70%.

The third place in turnover was taken by the port in Dudinka with 1,5 million tons of cargo. 37 transit flights added another 697,2 thousand tons to the SPM asset - an increase of 2018% by 41,9.

As you can see, the most active work is going on in the western sector of the Northern Sea Route, where they are developing the shelf and the Gazprom, Novatek, Lukoil, Rosneft, and Rosshelf fields closest to the ports. They give the main increase in cargo turnover.

The western sector of the Arctic (from Murmansk to Dudinka) is now working year-round. It is served by icebreakers of Rosatomflot. Since 2006, Norilsk Nickel has delivered its cargoes and socially significant cargoes to residents of the Norilsk industrial region on its own Arctic vessels (six units fleet) the highest ice class ARC-7, which do not require icebreaking support.

Oil and gas workers provided themselves with vessels of the reinforced ice class, although in difficult Arctic winter conditions they could not do without the help of icebreakers. The eastern sector of the Arctic (from Dudinka to Chukotka) is used mainly in the summer months of navigation. Diesel icebreakers of the Far Eastern Shipping Company work there.

This is precisely the weak link of the NSR, which impedes year-round transit cargo transportation. Meanwhile, the advantages of their delivery from East Asia to Europe via the northern route are obvious. For example, from Vladivostok, through the Suez Canal to St. Petersburg, you need to go almost 13000 nautical miles, and along the northern seas - 7600 miles.

The entire northern route can work fully only with the support of powerful atomic icebreakers. Three of them, project 22220, are now being built in St. Petersburg at the Baltic Plant. They are able to overcome ice up to 2,8 m, make a channel more than 30 m wide, work in the seas and riverbeds.

Only now the construction of these icebreakers has tightened up. The main one, the Arctic, came out last December with a two-year delay. In February, he had an accident in the propeller shaft electric motor. Now the transfer of the icebreaker to the customer has again moved forward, according to some reports - for a year.

Be that as it may, in the next three years, new nuclear powered ships will leave for the Arctic. But they will not solve the pressing problems. Firstly, the new icebreakers will partially replace the retiring ones and will be concentrated in the currently active Western sector of the NSR. Secondly, even these powerful nuclear powered ships do not provide passage in the ice of modern transit container ships that require a channel with a width of more than 40 meters.

In Russia, an icebreaker of such a project is being developed under the code "Leader". It will be twice as powerful as those under construction today (a nuclear power plant of 120 MW versus 60 megawatts in the new Arctic), break four-meter ice and go at a speed of 12 knots through a two-meter one. The design width of the nuclear-powered ship is 46 meters.

In accordance with the plan approved by the government, the first “Leader” is to enter the Arctic seas in December 2027. By that time, four new Arctic-type icebreakers will be operating at the NSR. Two more “leaders” will be built in 2030 and 2032.

These are long-range plans. In the next four years, 16 rescue and 13 hydrographic vessels will be made for the Northern Sea Route. A highly elliptical hydrometeorological satellite system “Arktika-M” has been deployed and will ensure uninterrupted communication along the entire northern route.

In the future, the Arctic constellation will comprise four Arktika-M satellites, three each - Resource-PM and Condor-FKA. Based on them, automatic identification of objects in the water areas of the NSR and a remote sensing system will operate.

In addition, a new helicopter model will be developed for new and existing icebreakers. They will also make a ramp aircraft capable of taking up to 10 tons of cargo, cover distances of up to four thousand kilometers, and land in ice and unpaved airfields in Arctic conditions.

There are other activities in the plan. They will allow to increase by 2035 the transportation of goods through the NSR to 160 million tons. Most of this volume will be provided by companies that are developing deposits in the Far North today. All this is the new life of the Northern Sea Route.

In order for it to take place, until 2024 about 900 billion rubles will be allocated for the development of the Northern Sea Route. A third of these funds will come from the federal budget. The remaining amount will be invested by Rosatom, subsoil users (Novatek, Rosneft and others) and private investors.

We are in Yandex Zen
Northern Sea Route. World transport future or grand projecting?
It's time to stop the assassination of the Russian Arctic
25 comments
Information
Dear reader, to leave comments on the publication, you must to register.