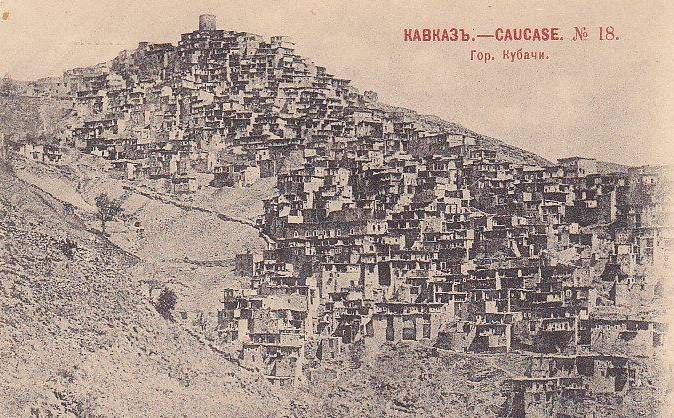 The ancient village of Kubachi gained fame as the cradle of the most skilled gunsmiths and jewelers. Kubachi daggers, sabers, yatagans, chain mail and various jewelry adorn the collections of the most famous museums of the world: the Louvre Museum in France, the Metropolitan Museum of Art in New York, the Victoria and Albert Museum in London, the Hermitage in St. Petersburg, the All-Russian Museum of Decorative and Applied Folk Art and the State Historical Museum in Moscow. According to numerous legends and traditions, Kubachinsky weapon belonged to Prince Mstislav, son of Vladimir Monomakh, and Alexander Nevsky. There are fantastic theories. According to one of them, the helmet of Alexander the Great himself has Kubachin roots.


Kubachi himself is notable for a battle tower, which is a unique creation of the fortification architecture of the Caucasus. It is completely unlike the solid Ossetian residential and battle towers; it is far from the sophisticated Vainakh towers. The unusual appearance of the Kubachi tower is associated with another cultural influence that Kubachi experienced for its ancient history.

However, no less mysteries are hidden in themselves and Kubachintsy. According to one version, the Kubachins are not just one of the branches of the Dargins with their own dialect, but the real European aliens from Genoa or France. This version is based on the fact that Laks and Lezgins called the Kubachins Prang Kapoor, i.e., Franks. And references to certain Franks or Genoese in the mountains near Kubachi are found by authors such as ethnographer Colonel Johann Gustav Gerber, traveler Jan Potocki and academician Johann Anton Guldenstedt. However, modern scholars studying tombstones decorated with carved eagles and dragons tend to believe that Kubachi has Middle Eastern roots.

In the distant VI century, the state with the mystical name Zirichgeran began to develop on the territory of modern Kubachi. The state was governed by a council of selected elders. According to other sources, the early Zirichgeran (translated from Persian as “chain mail” or “armored”) had his own king or ruler. At the same time, Kubachi was the capital at that time. A little later, the state is isolated as a free society, which creates a council. 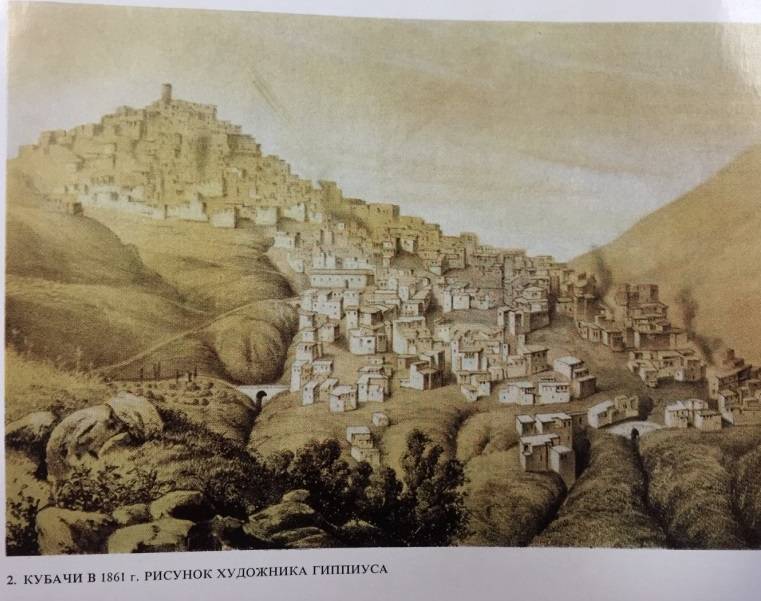 The council was directly subordinate to the military organization (squad) of Batirte, consisting of unmarried young people. They were engaged in wrestling, throwing stones, distance running, horse racing, archery, cold steel exercises and paramilitary dances of Askaila. The squad consisted of 7 units of 40 people each. It is noteworthy that the members of Batirte lived separately from the Kubachintsy in battle towers. The duties of the soldiers included a guard service, protecting the village from external attacks, robbery and robbery. Often, Batyrte fought with residents of neighboring villages in order to protect the forest and grazing lands, cattle and herds of horses belonging to the Kubachi.

Given the many civil wars, Batirte fought with neighboring villages and just for the sake of influence. At the same time, the geographical location of Zirichgeran, lost in the mountains at an altitude of more than 1600 meters, played a significant defensive role. Despite the fact that Zirichgeran periodically became dependent on neighboring feudal microstates like the Kaitag Ussmii, the capital remained formally independent. Even during the Arab expansion into the lands of Dagestan, the warlord Mervan ibn Muhammad, the caliph from the Umayyad dynasty, having seized Tabaristan, Tuman, Shindan and other possessions, decided to sign a peace treaty with Zirichgeran, and not risk an army in the mountains, fighting against a real weapons spring.

Kubachi daggers Kama
The relative independence of the ancient state can be traced in the religions practiced in Kubachi. In Zirichgeran, one could meet Muslims, Christians, Jews, and even followers of Zoroastrianism. And just the spread of the last religion determined the unique architecture of the Kubachi battle tower.

Above the ancient village of Kubachi, a battle tower rises with its own name - Akayla kala, which served as the home for one of the Batirte warrior squads. From the height of the tower offers stunning views of all the surroundings of the village. The tower is located in such a way that the Batirte fighters could see in advance a possible enemy, from whatever side he tries to approach Kubachi. The Kubachin Tower is just a small echo of those powerful fortifications that once encircled the ancient village. Many centuries ago, the whole of Kubachi was hidden by the thick walls of masonry.

A distinctive feature of Akayla kala is its similarity to the Zoroastrian towers of silence - dahme, which served as funeral structures in religious rites of Zoroastrianism, widespread in Iran. Since Zirichgeran had deep and dense trade relations with various countries and entire civilizations, it can be quite assumed that during these relations the people of Zirichgeran were culturally enriched. 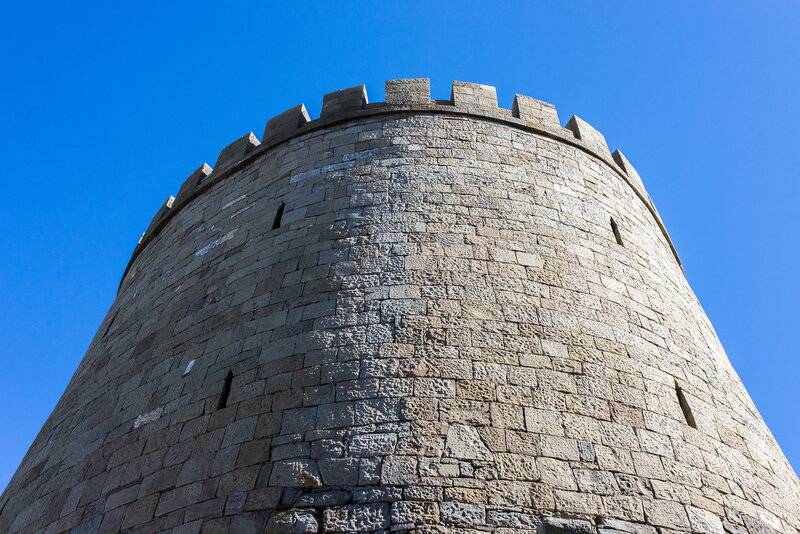 Tower in Kubachi
The Kubachin Tower is built of large, specially hewn stones with shell masonry with an internal backing of torn stone and earth. The height of the structure is about 16 meters, and the diameter is 20 meters. The wall thickness at the entrance reaches 1,45 m. There is a problem with the dating of the tower. Some believe that the construction of Akayla kala began in the XNUMXth century, while others, emphasizing the Zoroastrian architectural features, believe that the tower was erected in the XNUMXth century, since Islamic expansion could hardly leave such architectural traces.

The tower was rebuilt several times, but initially it had five floors above the ground and two underground floors. On the top floor, the Batyrte warriors trained and served. Two floors were allocated directly under the living quarters. Two more floors served as a pantry for food supplies and a Zeichhaus. One of the underground floors was a kind of guardhouse. This is due to the extremely harsh traditions of Batirte. For example, among the warriors the “union of the unmarried” or the “male union” was spread. Members of this almost sectarian movement devoted themselves entirely to military service, but when the flesh gained the upper hand, the warrior was sent to serve his sentence.

In general, legends still circulate about the severity of Batirte's rules. For example, they were allowed to appear in the village exclusively under the cover of twilight. According to one legend, once a mother recognized in one of the warriors her son with an open hand and dared to call him by name. The next day they sent her a severed hand of her son, so that she would not knock him off the right military path. 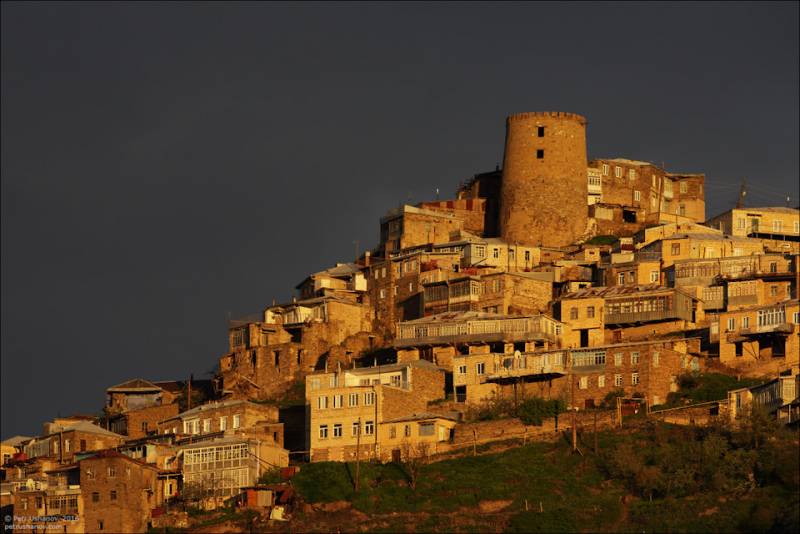 Despite the strictly organized military structure of Batirte and the craft power of Zirichheran, this tiny mountainous state could not forever be on the edge of the bloody winds of history. The strongest Islamic-Arab expansion, which was forced and violent in nature, by the 1467th century also affected this unique world. In XNUMX, the name Zirikhgeran first disappears and the Turkic name Kubachi appears, which, in essence, is the equivalent of the words “chain mail masters” or “chain mail”.

Save at all costs

Nowadays, Kubachi, despite the unfading weapons of fame, is a very modest village with a population of less than 3000 people. Not the best times are going through the unique Akaila kala tower, which, fortunately, continues to dominate the area. 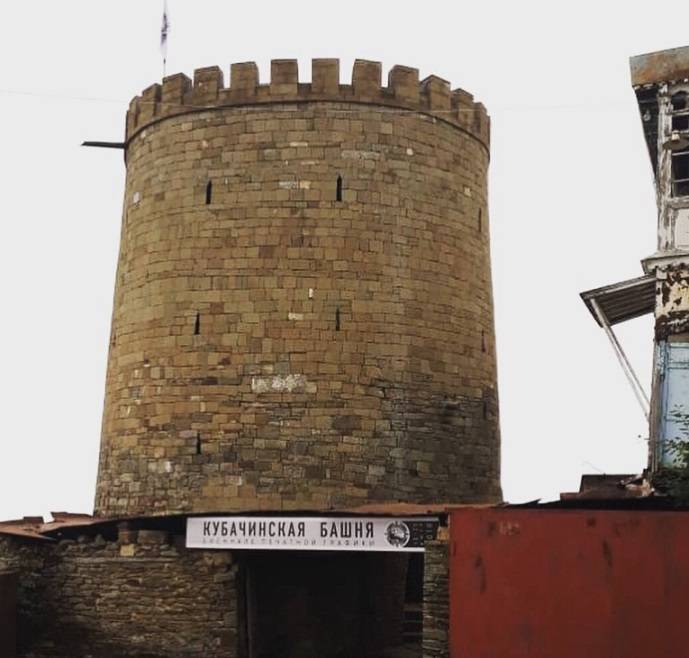 In the mid-XNUMXth century, the tower was rebuilt into a residential building, because its combat functionality lost its meaning. Part of the upper floors was demolished, although at the beginning of the XNUMXth century the third floor was rebuilt. However, the unique historical masonry underwent significant changes, almost completely losing its original face. At the beginning of the XXI century, the tower was completely empty and began to collapse under mountain winds and snowfalls.

In 2009, with the support of the Ministry of Culture of Dagestan and the youth of Kubachi, the tower was restored as close to the original as possible. A unique museum was opened inside the tower, recreating the surroundings of an old Kubachin house. However, this is extremely small, since the ancient Kubachi needs to conduct fundamental ethnographic and archaeological research by a whole group of scientists so that there are fewer white spots in history.

Ctrl Enter
Noticed a mistake Highlight text and press. Ctrl + Enter
We are
What do Russian helmets with Arabic inscriptions prove?The most expensive helmets. Part Eight The Armory of the Moscow Kremlin in all its glory
11 comments
Information
Dear reader, to leave comments on the publication, you must to register.