The myth of the Aurora volley in the Winter Palace 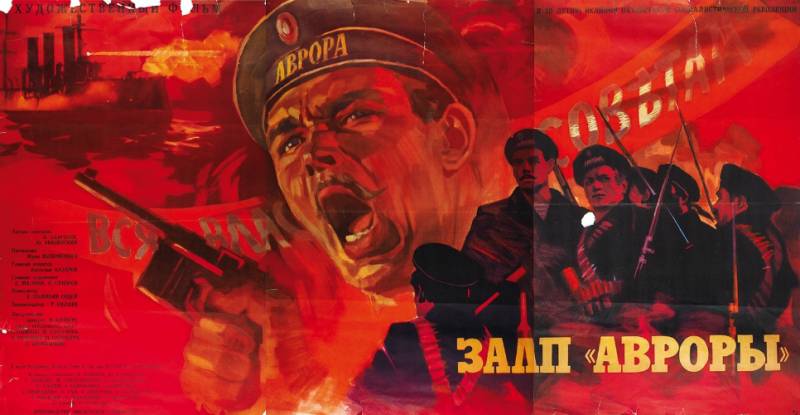 The myth of the Aurora salvo was born immediately after the storming of the Winter Palace. However, on October 25, 1917, shooting at the palace was not carried out by a cruiser, but by the guns of the Peter and Paul Fortress.

On October 25, 1917, at approximately 21:40 minutes, the Aurora fired one blank signal shot. However, almost immediately after the storming of the Winter Palace, a myth was born about the salvo of a ship. Such information began to appear in the press and literature. The American journalist and writer John Reid, a witness of the October Revolution, noted in his book “Ten Days That Shook the World” (published in 1919): “The sidewalk under our feet was covered with stucco collapsing from the palace ledge, where two shells from Aurora hit ". The bombing did not cause other damage. "

The later version that the legendary cruiser hit the palace with live ammunition became generally accepted. In the Short Course stories VKP (b) "of 1938 noted:" The cruiser Aurora, with the thunder of its guns aimed at the Winter Palace, heralded on October 25 the beginning of a new era - the era of the Great Socialist Revolution. ” Performances were staged about this event. In 1965, the film Aurora Volley was released. Aleksey Tolstoy wrote in his novel “Walking through the agony”: “The Winter Palace was empty, pierced through the roof by a shell from Aurora.

Before the October Revolution, the Bolsheviks dominated the cruiser Aurora. Sailors of the Baltic fleet became one of the main shock forces of the revolution. Therefore, the cruiser team took part in the armed uprising in Petrograd. On the afternoon of October 25, 1917, the head of the field headquarters of the rebellious Antonov-Ovseyenko instructed the crew to give a couple of blank shots from a 6-inch gun. Also, part of the crew went ashore to participate in patrolling the city. An appeal written by V. I. Lenin “To the citizens of Russia!” Was transmitted by radio from the ship. At about 21:40 p.m. gunner Yevgeny Ognev from a six-inch fired one signal shot. It is believed that he became the signal for the storming of the Winter Palace.

In the following days, information began to appear in newspapers that the ship was firing shells at the palace. These messages were immediately denied by the Aurora team. So, on October 27, 1917, the Pravda newspaper received a letter from the crew of the ship. It protested the allegations that cast a “stain of shame on the cruiser’s team," which allegedly killed civilians. It was noted that if the warship fired live ammunition, "the fire from the guns would not leave a stone on the stone of not only the Winter Palace, but also the streets adjacent to it." The team confirmed that a single blank shot of a 6-inch gun was fired, which was a signal for all vessels standing on the Neva.

In addition, many researchers of the storming of the Winter Palace noted that the Aurora simply could not shoot at this object. Firstly, due to the location of the ship, he could not conduct effective fire. Secondly, before the revolutionary events on the cruiser began overhaul and removed all the ammunition.

It is worth noting that the defense of the Winter Palace was unsatisfactory. In the garrison before the assault, a small handful of cadets and invalids, St. George cavaliers, part of the 1st Petrograd women's death battalion remained. At the same time, part of the garrison dispersed and fled before the assault: Cossacks, part of the cadets, artillerymen and armored detachment. Also, the command generally did not organize the defense of the building, the supply of the garrison. Countless corridors of the palace and passages were not guarded, the military did not even have a floor plan. Therefore, the battle was generally stupid shooting, from which only a few people died.

In the end, the Bolsheviks simply discovered places where there was no protection at all and entered the building without resistance. After wandering for some time along the corridors of the palace, the Antonov-Ovseenko detachment reached the Malachite Hall in the early morning of the 26th. Hearing voices in the next room, the Red Army opened the door to the Small Dining Room. There were the ministers of the Provisional Government, who moved here from the Malachite Hall. They were arrested.

Earlier, at about 23 p.m., the Winter Palace was fired from the guns of the Peter and Paul Fortress. 35 shots were fired, and only two barely hooked the building. Obviously, the gunners did not want to shoot at the palace itself and intentionally shot over the building. As a result, most of the shells fell on the Palace Embankment, several glasses in the Winter Palace were shattered.

Interestingly, a hospital was opened in the Winter Palace itself in 1915. For the wounded, they decided to divert the ceremonial halls facing the Neva: the Nikolaev Hall with the Military Gallery, Avan Hall, Field Marshalsky and Stamp. As a result, eight of the largest and most beautiful ceremonial halls of the second floor were converted into hospital wards. In October, the grand opening of the hospital for 1 people took place. He was named after the heir to the throne, Tsarevich Alexei Nikolaevich. In the Nikolaev Hall there were located those affected in the head, neck, chest and spine; in the Armorial Hall - with wounds in the abdominal cavity and thigh, etc. Also, doctors’ rooms, a reception room, a pharmacy, bathrooms, etc. were placed on the ground floor. The hospital was equipped with the latest science and technology of the time. On October 27–28, 1917, the hospital of the Winter Palace was closed, patients were distributed among other hospitals in the capital.

We are in Yandex Zen
American red idealist
Russo-Japanese War 1904-1905's. State of the Russian fleet. Bad luck and missed opportunities
97 comments
Information
Dear reader, to leave comments on the publication, you must to register.