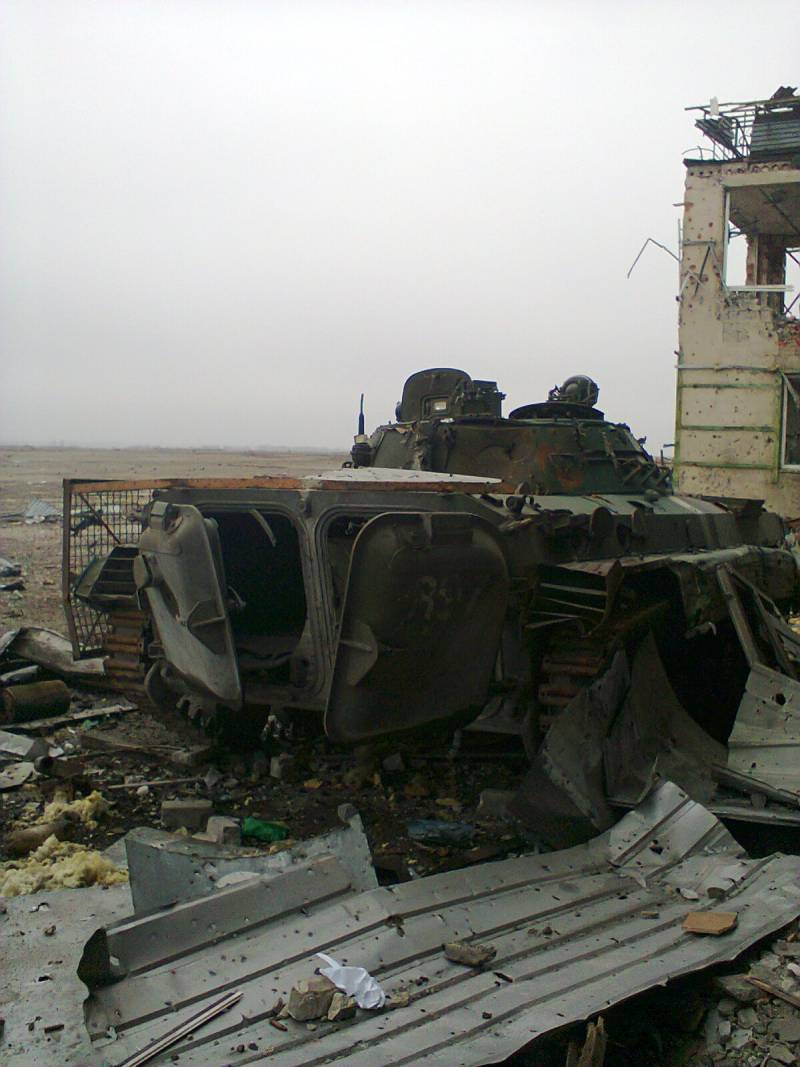 According to the official data of the Ukrainian General Staff, this year 41 Ukrainian soldiers died at the front in Donbass. Given Kiev’s penchant for myth-making, the figure seems clearly underestimated, as well as Ukraine’s declared LDNR losses, which, according to the Ukrainian military, have long exceeded one hundred. In any case, the losses are clearly growing: according to the Air Force in 2018, 110 military personnel of the Armed Forces went to the other world.

Collisions on the demarcation line (including in the places of the recent withdrawal of forces and assets) are serious, with the active use of armored vehicles, artillery and mortars banned by Minsk calibers, drones and anti-tank systems. Recently, ATGMs and LNG have been used most often - both sides are hunting for enemy trucks, and the APU has traditionally not disdained to destroy “water carriers” and ambulances.

Civilian casualties are also rising. In March alone, 10 people became victims of shelling of the Ukrainian Armed Forces in LDNR, one victim died. Losses among the civilian population on the side controlled by Ukraine are unknown, however, judging by the lack of appropriate News in the Ukrainian media, the people's police work much more responsibly and accurately.

Among the "guard patriots" it is generally accepted that after the signing of the second Minsk agreements, the armed forces of the unrecognized republics turned into whipping boys who could only suffer losses and receive sensitive blows from the enemy. Insanity sometimes reaches such an extent that even journalists who actively communicate with representatives of the Corps begin to spread such fables - in early March, in connection with such slander, a journalist of one of the Russian publications lost her accreditation.

Actually, of course, the LNR armed forces can and do love, but they do it wisely, trying not to advertise violation of the agreements for which the OSCE and various international organizations ask, for some reason, only from the republics - and never from Ukraine. Yes, it happens that the decision to use large calibers is made locally by the commanders or even the soldiers themselves, for which the command then strictly (and not always rightly) requests them. War is war - it happens that fighters get naughty and can even take advantage of a thunderstorm and peals of thunder to send fiery greetings to the APU (it was possible to observe such fun).

As for the stupid things about cartridges for machine guns that go to the bill, maybe this kind of madness is happening in some separate, exemplary units, but in general, the very idea of ​​calculating ammunition for a rifle weapons It looks unlikely.

Life on the Verge

The escalation of hostilities after the comedian Vladimir Zelensky came to power in Ukraine, who turned out to be a worthy successor to Poroshenko’s policy, led to a logical result: the command increasingly gives orders for a symmetrical artillery response and counter-battery operation. Moreover, the preventive work to prevent the construction of APU strongholds in the gray zone has finally become noticeable (Poroshenko’s notorious strategy of “toad jumping” is to capture the “neutral” and approach the trenches of the LDNR fighters, get on the teeth and “jump off”). Apparently, in Donetsk and Lugansk a decision was made to clearly show the enemy that not only Kiev can raise rates.

It is not known how the epic with the spread of coronavirus will end (there is still not a single case in LDNR; the border with the Russian Federation has been reopened), and how it will affect the situation at the front, but so far there are no significant changes in the situation. So far, the number of shellings has slightly decreased, but this is most likely a temporary phenomenon. It is likely that in the near future, increasing anarchy in Ukraine will lead to an escalation of hostilities: having lost the last constraining factors, the Ukrainian Armed Forces units at the forefront can go into all the hardships.

Given the fatigue of the corps command from provocations of the Armed Forces and the growing activity of the people's police units, it is logical to assume that the further aggravation game from the Ukrainian side will result in a fierce local conflict, and possibly a full-scale massacre. In fact, just one push is not enough to implement such a scenario; some provocation or antics of the Ukrainian side. It seems a little more - and the comedian president will play out ... However, it may also be that the spread of the coronavirus will distract the attention of Ukrainians from the Donbass. It is likely that the further development of the situation will become more or less obvious in April.