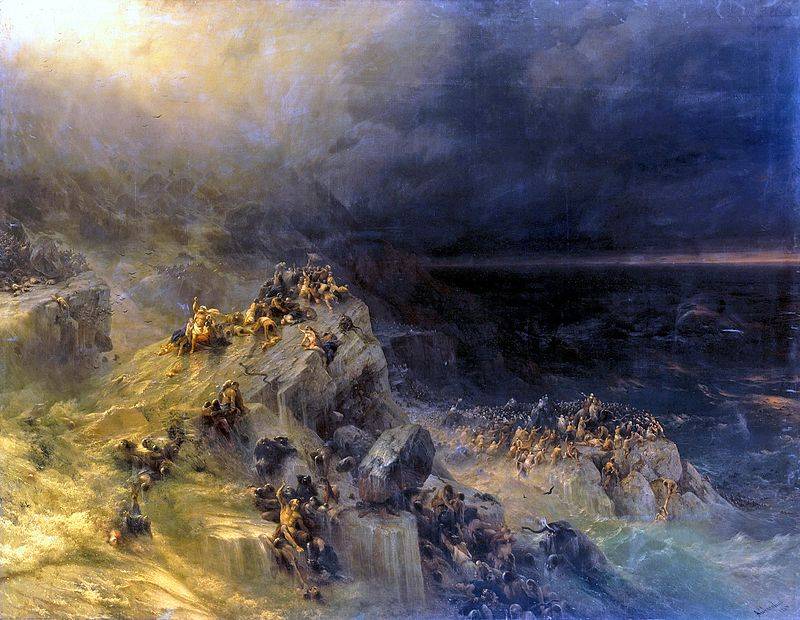 To make it clear to you, in vain we do not argue so that
Think of the terrible, about the global flood.
Incredible rain all flooded then.
People are not ruining beer, people are ruining water.
Song from the comedy film "It Can't Be." Words by Leonid Derbenev

Historical science against pseudoscience. That's the good thing about working at VO? The fact that there are many people who are interested in learning something new and, perhaps, most importantly, the level of their intelligence allows them to correctly evaluate it. That is, in order to ask the right question, you need to know half the answer, and readers of VO basically know it. But it is clear that they are interested in the details. Here, for example, the topic of the global flood that surfaced recently when discussing an article on ancient Russian chronicles. And this topic, by the way, is the most military one. After all, any “drowning” of the land leads to its deficit, and deficit is the surest way to war. Therefore, it is not surprising that a number of our regular correspondents spoke in favor of publishing a series of materials about the Flood. And if the people want, he will certainly get it, at least my opinion is this: he must get it! And we will begin this cycle not from biblical stories, although they are very, very interesting, but from what science has discovered today and what is an undeniable scientific fact. That is, we will devote our first story to Doggerland and Sturegg! 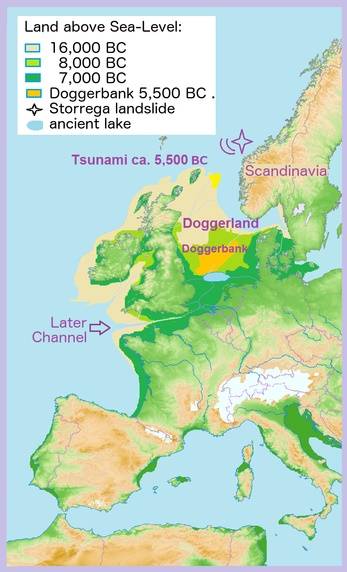 Doggerland Map. The Sturegg district is marked with a cross.
And it was so what happened on our planet The Great Glaciation. It lasted a long time, the glacier either advancing or retreating, but the main thing for us will not be the periodization of this event, but only the fact that people already lived in Europe at that time. Well, already in our time it was known that in the very center of the North Sea there is a sandbank, which is called Dogger Bank and which became famous for the fact that during the First World War a battle of English and German battle cruisers took place near it. Bank as a bank - you never know them in the world. However, it happened that in 1931 the Kolinda fishing trawler caught a piece of peat there, and in it a prehistoric deer horn, which was clearly processed and was nothing more than a harpoon tip 220 mm long. Then, the remains of a mammoth and a lion were lifted from the bottom, and, most importantly, prehistoric tools and weapons. Then, 16 km from the coast of Zealand, a fragment of a Neanderthal skull, about 40 years old, was lifted from the bottom of the sea. 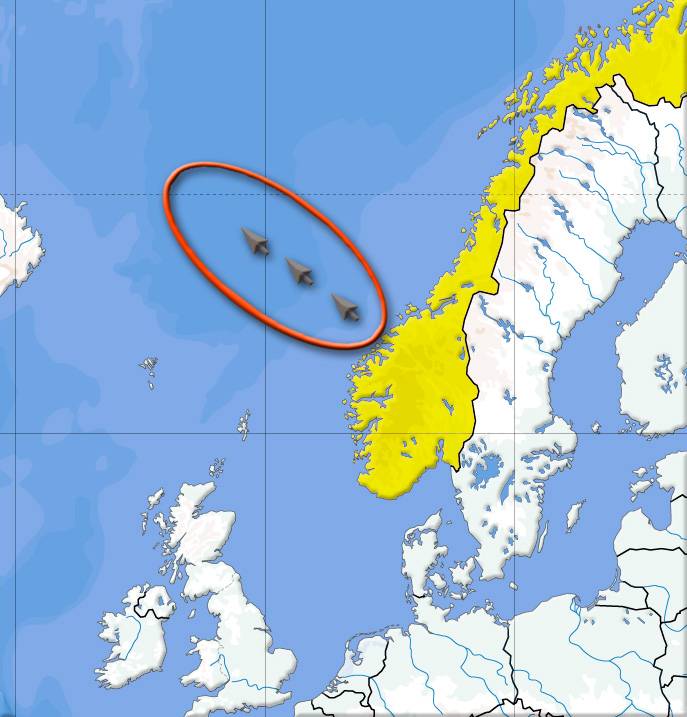 Area of ​​three successive landslides of Sturegg
It was obvious that under the water lies the land that used to be land, but which was then covered by water. It was obvious that it occupied the entire southern part of the North Sea and connected Britain with Denmark. Archaeologist Briony Coles gave this sushi array the name Doggerland. It gradually became clear that Doggerland was inhabited by people in the Mesolithic era, and it was rich in flora and fauna.

About 10 thousand years ago, when both the North Sea and almost the entire territory of the British Isles were hidden under a layer of ice, the sea water level was 120 meters lower than the current one. There was no English Channel, and the entire bottom of the North Sea was a tundra zone. But then the glacier began to melt, and the level of the oceans began to rise gradually. By 8000 BC e. Doggerland was a flat area formed by the sediment of the Rhine, and its coastline was replete with lagoons, swamps and beaches. It is believed that in the Mesolithic era, these lands in Europe were a real paradise in terms of bird hunting and coastal fishing. 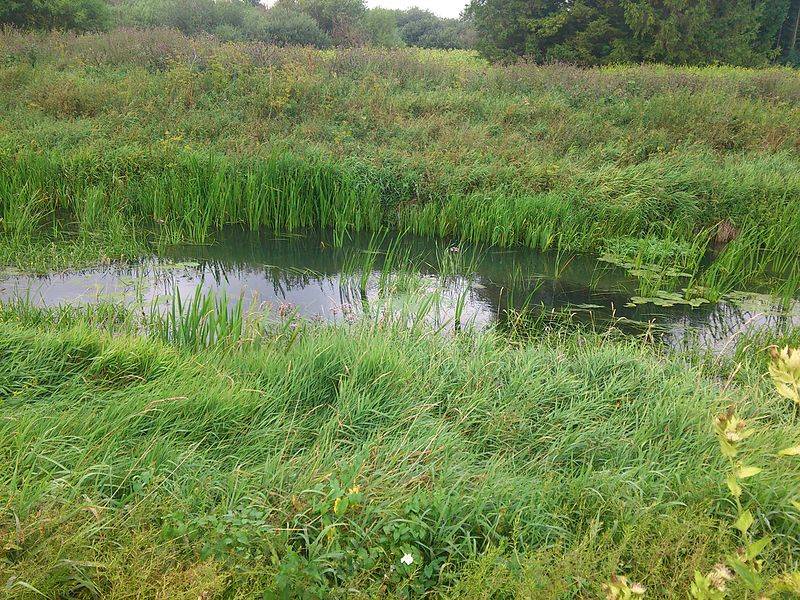 Perhaps this was the landscape of ancient Doggerland
It was about the same as in modern Holland. A mass of birds nested in the reeds, and there were a lot of fish in streams, rivers and lakes. In addition, the sea near the coast was also shallow, and there were many fish in it too. Moreover, the fish are large, otherwise the bone harpoon would not have raised the sea from the bottom. It is possible that local residents built pile dwellings and lived in large pile villages, perfectly protected by swamps and lakes from the invasion of any enemies. Moreover, since this was the Mesolithic era, they already knew the bow and arrows, which means they could fight at a distance and ... beat the bird flying. That is, this place for a primitive man was very convenient in all respects. A convenient place is never empty; it is not without reason that the remains of a human skull are found here. 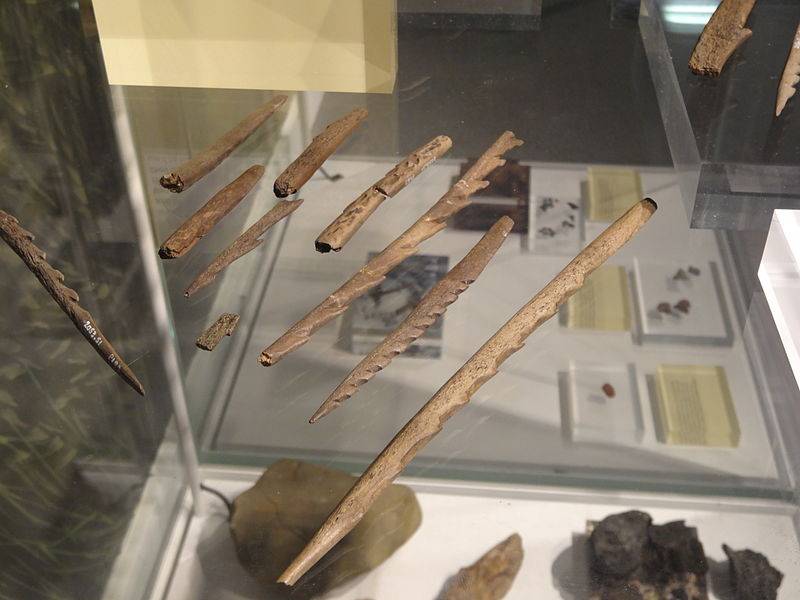 A collection of Mesolithic spearheads and harpoons from the earliest known postglacial settlement in England. Yorkshire Museum
For a long time, it was believed that the rise in sea level caused by the melting of glaciers occurred gradually. First, the sea cut off prehistoric Britain from Europe (about 6500 BC). Then Doggerland flooded, but in its place until 5000 BC. e. the island was preserved. 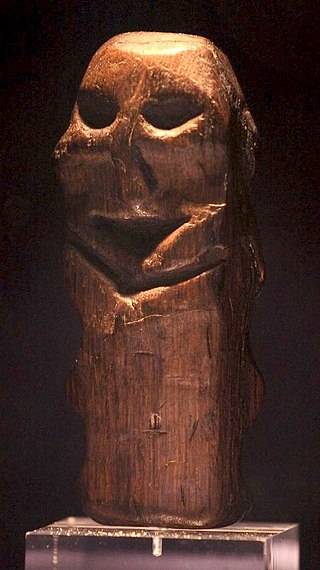 6500-year-old oak statue found in Willemstad (Netherlands). State Museum of Antiquities, Leiden
However, evidence has recently been found that Doggerland's flooding was sudden. That it was flooded by a giant tsunami about 8200 years ago (6200 BC), and it was caused by a landslide of underwater soil off the coast of Norway, which was called Sturegga. After this catastrophe, Britain finally separated from the continent. And besides, local cooling began, caused by the influx of cold water from glaciers melted in Norway.

Seismology data helped to find out what the relief of the seabed in these places was, and they, in turn, were received by oil producers. It turned out that Sturegga (ancient Norwegian. Storegga, that is, literally translated as "big edge") was not one, but represented three successive landslides. It is believed that Sturegga is one of the largest disasters in the history of mankind. 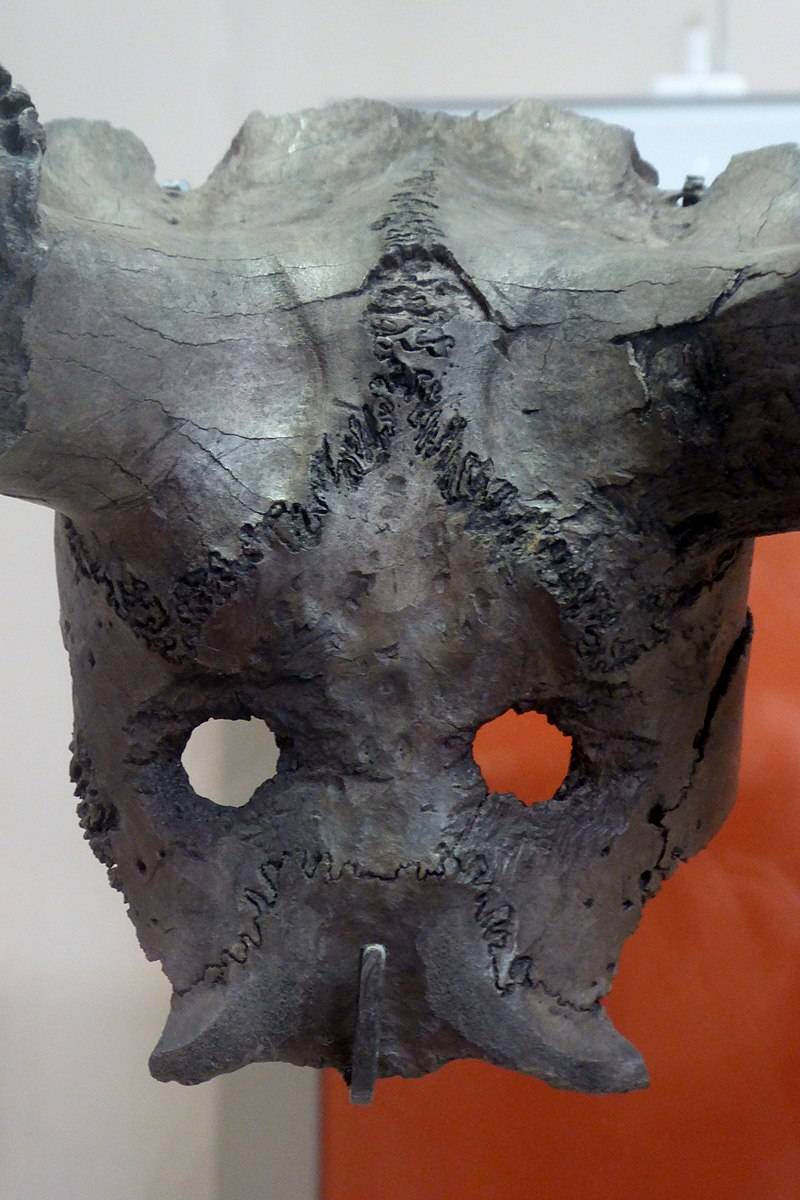 Ritual mask of a deer skull. British museum
But where did the “material” come from for these landslides? It was brought by streams and rivers from a melting glacier. For several millennia, river sediments were deposited on the edge of the Norwegian continental shelf and there were more and more of them. And then there was an underwater earthquake, and all this huge mass of silt and sand came into motion and crawled down a steep slope further into the ocean. A landslide captured along the length of about 290 km of the coast, and the volume of displaced was approximately 3500 cubic meters. km, which is a lot, because with such a quantity of rock it would be completely possible to cover the whole of Iceland with a layer 34 meters thick. 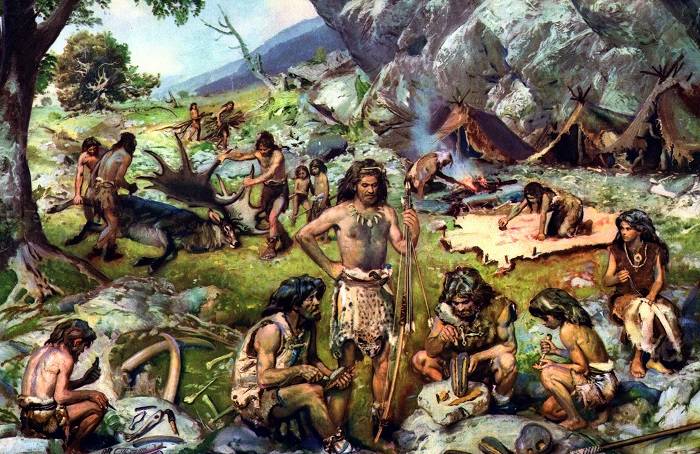 Mesolithic Parking Lot
A radiocarbon analysis of plant remains found under the sediments of this tsunami showed that the last of a series of these landslides occurred around 6100 BC. e. Moreover, in Scotland, the sea penetrated a distance of 80 km from the coast, and traces of it were found at an altitude of 4 meters above the level of the highest modern tides. Fortunately for us, a repetition of such a catastrophe is impossible. Rather, it can happen, but only after the end of a new ice age and the accumulation of another portion of flush rock at the bottom of the Norwegian shelf. 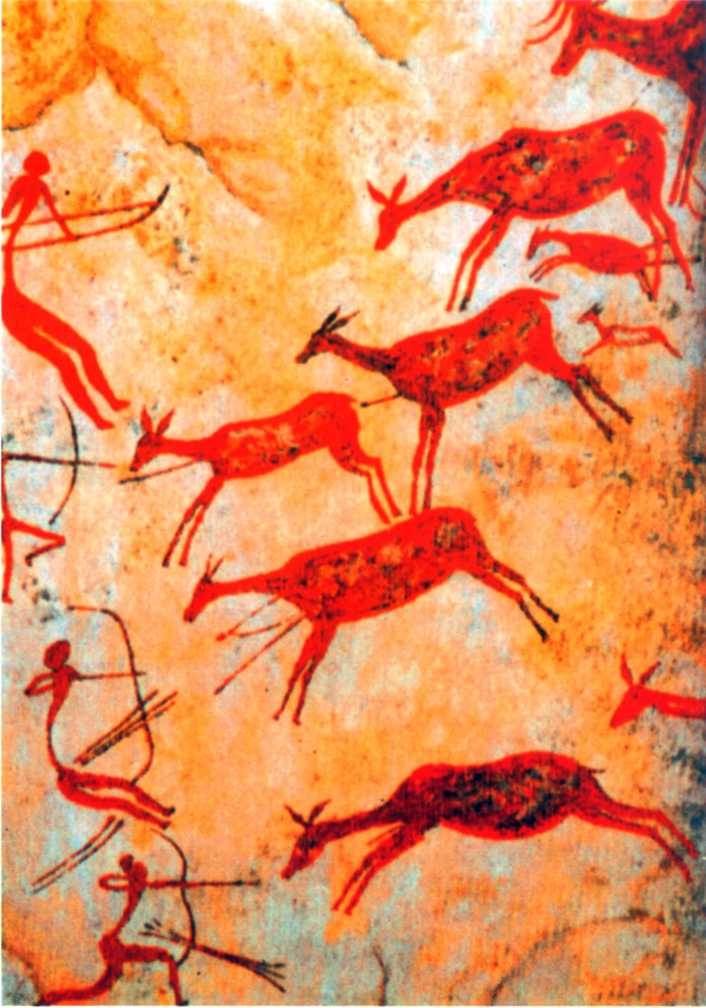 Hunting scene on a cave image of the Mesolithic era. Spain
Now let's look at the art of the people of the Mesolithic era known to us. The painting of this time became more abstract. If in the Paleolithic era 80% of the images are animals, and 20% - of a person, now the main part falls on people, moreover, not one specific person is depicted, but a community. Hunting scenes are very popular when a lot of people drive a lot of animals, scenes of mass dances and rites. In Valltorta Gorge, researchers found, for example, a whole gallery of picturesque compositions with scenes of deer, wild boar and ram hunting. There were also images of the first battles of people with people (that is, the war has now become an object of art), as well as a unique drawing depicting execution (in the center of it is a man pierced by arrows, and around are people with bows in their hands: the real St. Sebastian! ) True, there is no such detailing as before. But the movement, the plot appears in the drawings, which means that the human brain has developed to the level of abstract thinking and has become capable of generalizing objects and phenomena. Without a doubt, this kind of thinking should have affected the language level. That is, oral folk art, legends, tales and tales appeared, passed from mouth to mouth. 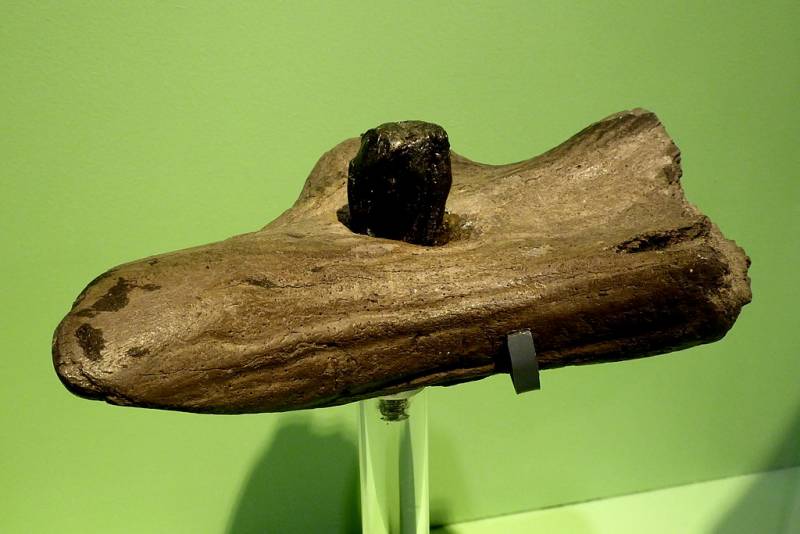 An elk horn instrument made about 11 years ago. Museum of Archeology and Anthropology, University of Cambridge
And here comes the conclusion: such a massive catastrophe as the flooding of Doggerland’s vast expanse simply could not help but find its reflection in people's memory. After all, not everyone died there, who survived, and then painted (or perhaps even painted!) Their adventures to those people who were not affected by the cataclysm. 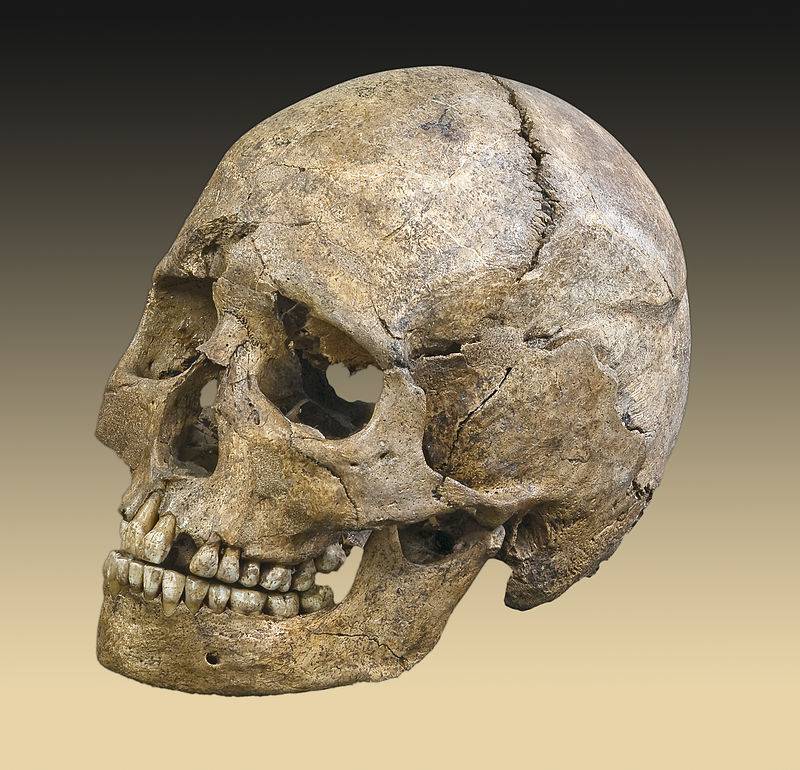 Skull of the Tevitsky burial. A woman from 25 to 35 years old died a violent death from numerous fractures of the skull and bone damage associated with arrows. Mesolithic (from 6740 to 5680 BC). Tevets (Morbihan, Brittany, France). Toulouse Museum
Well, as an epilogue, let's read the end of the novel by A. Belyaev “The Last Man from Atlantis” - you can’t say better than him: 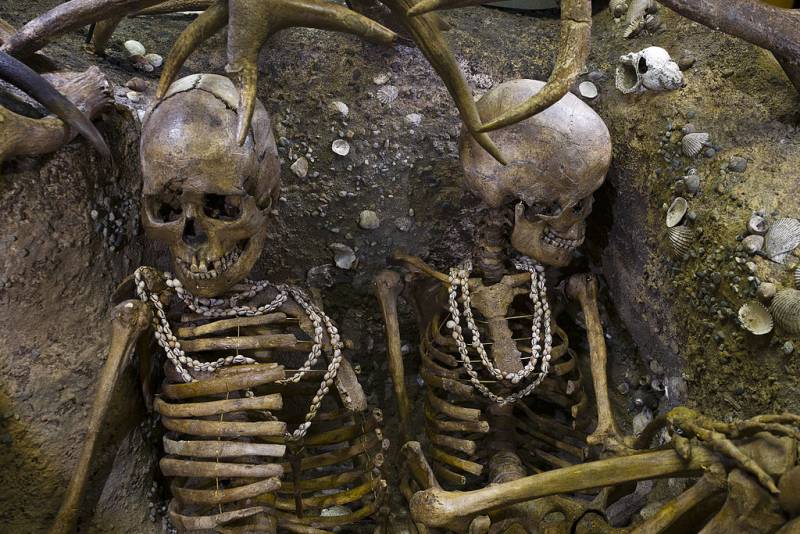 Tevitsky burial. Mesolithic (from 6740 to 5680 BC). Tevets (Morbihan, Brittany, France). Toulouse Museum. Pay attention to the beads. Very elegant, right?
"... People listened to these stories with the exciting curiosity of the children, passed on to each other, added and decorated these stories from themselves, cherished them like a sacred tradition."

Ctrl Enter
Noticed a mistake Highlight text and press. Ctrl + Enter
We are
Chernobyl notebook. Part of 3Father told
212 comments
Information
Dear reader, to leave comments on the publication, you must to register.