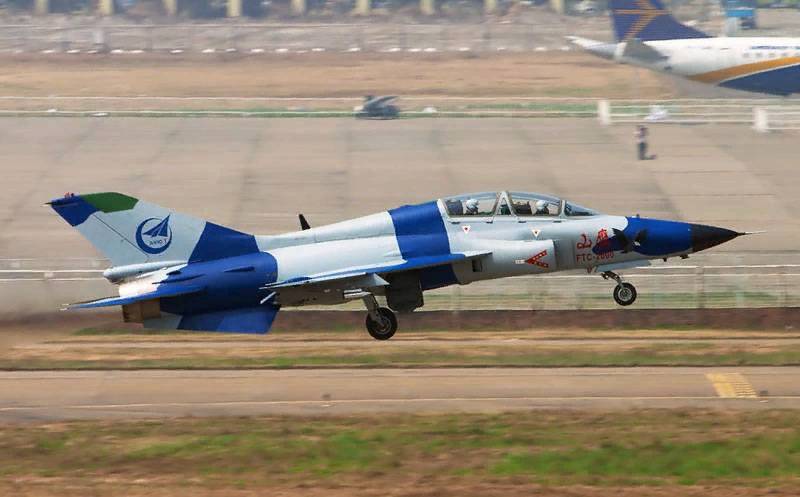 At a time when the armies of NATO countries, in fear of the coronavirus, are shutting down at bases and in the barracks, hurriedly canceling all the exercises that had been planned earlier, the Chinese comrades are quite in time to fight the pandemic in parallel and continue to work to strengthen the country's defense capabilities. An example of this is the last news regarding the Chinese training aircraft JL-9 Mountain Eagle.


Recall that the TCB JL-9 / JJ-7B under the name "Mountain Eagle" was adopted by the PLA back in 2011. The development of the aircraft itself began in 2001 by Guizhou Aircraft Manufactory and Nanchang Aircraft Manufactory. The main tasks set for the developers were the creation of a training aircraft, modern, but at the same time inexpensive, suitable for training pilots for 3rd generation fighters.

The last point also suggested a reduction in the training time for pilots amid an improvement in the quality of such. Earlier, the training of Chinese pilots included several phases and degrees, and due to the banal lack of finances, aviation technique of one type. To achieve the level of a 3rd generation fighter pilot, a person needed to master six types of different aircraft. But even with all the stages of training on the right number of machines, the efficiency in modern conditions was quite low, because the pilots who were trained on old equipment lacked the qualifications to control modern aircraft modifications, for example, such as J-7G / H and J- 8H / F.

The first flight of the JL-9 prototype was carried out in 2003, the official presentation was held in Zhuhai at the air show in 2006. The developers assured that the goals set for them during the development of the aircraft were fully achieved. Training at JL-9 significantly reduces the gap between initial and vocational training. Well, the financial component is respected. Unlike similar foreign-made aircraft, the cost of which starts at $ 10 million, the Mountain Eagle costs China only 8,5 million. The cost of a JL-9 flight hour is also quite low.

Nevertheless, one more problem, which is extremely important for the Celestial Empire, striving at any cost to create a worthy counterbalance to the aircraft carrier strike groups of the Americans, remained. Despite the commissioning of the second aircraft carrier by the PLA, the training of pilots who were supposed to service the aircraft deployed on them was carried out using the same “ground” JL-9, capable of taking off exclusively on ground airports and landing on them. It is clear that the quality of training in this case caused some doubt. But now, it seems, this issue has been resolved.

A few days ago, the development company JL-9 Guizhou published images in which the Mountain Eagle is already landing on an aircraft carrier. She also expressed her desire to “win a new victory” by presenting the Chinese Navy with a marine version of the “Mountain Eagle”. Adapting to work in the new realities, now, probably, the Sea Eagle, has undergone modifications in the form of an increase in the area and contours, and, naturally, a hook appeared for landing on the deck. At the same time, prudent developers left the chassis unchanged, which will allow the aircraft to be operated from ground airfields.

Due to the specifics of flying from an aircraft carrier, most likely, the JL-9 will require some serious improvements, including the airframe and engine, but, as the events of recent months have shown, the Chinese comrades are able to solve tasks much more global and serious, to say nothing of such trifles ...

Ctrl Enter
Noticed a mistake Highlight text and press. Ctrl + Enter
We are
The 20 rating of the largest arms deals, decisions on which were made in 2012Yuri Drozdov: Russia prepared the role of the sacrificial calf
25 comments
Information
Dear reader, to leave comments on the publication, you must to register.