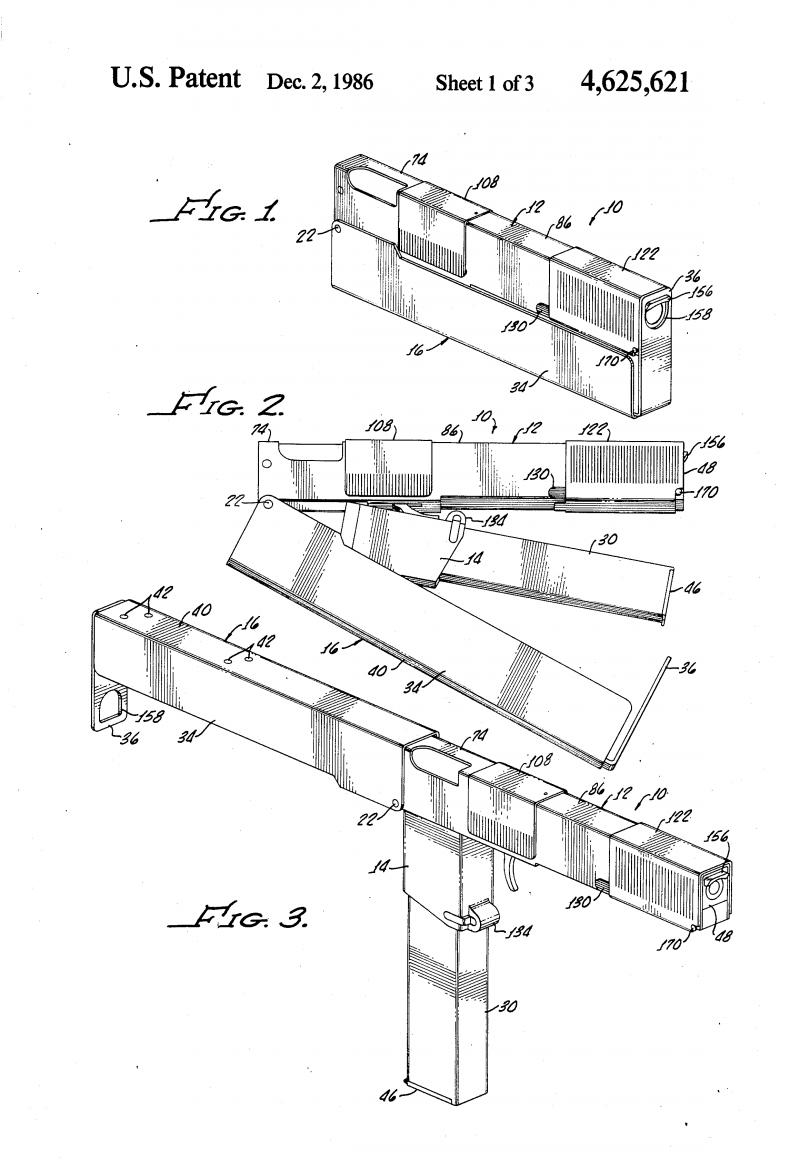 It is worth highlighting the production of trunks, which currently occupies several buildings with a total area of ​​2,2 thousand square meters. m. ARES is proud of the lathe, which is capable of processing blanks for shafts with a diameter of up to 27 ”(68,58 cm) and a length of up to 244” (6,2 meters).

From the company's developments, the author remembered the experimental product ARES FMG: a submachine gun for hidden carrying, which folds in half. The author, Francis Warin, developed it because in the early 1980s, cases of abduction of high-ranking officials and executives of large companies became more frequent in South America. It is generally accepted that the author conceived the ARES FMG software as "a personal weapon for the self-defense of businessmen." Later, similar weapons were developed in Russia (PP-90) and in the USA (Magpul FMG-9).

In 1986, the company introduced the ARES LMG 1 light machine gun, which is a development of the 1963 Stoner system, to the market. Therefore, the new modification is often called the Stoner 86. The barrel, as on the previous model, is quick-detachable. The machine gun is equipped with a tubular fixed butt and folding bipod. Combined type of ammunition: carried out either by a ribbon of 200 rounds (main), or by stores of 30 rounds (reserve). It is difficult to say whether Eugene Stoner spied a solution with combined power supply for the Soviet post-war development RP-46 machine gun (tape + disk). 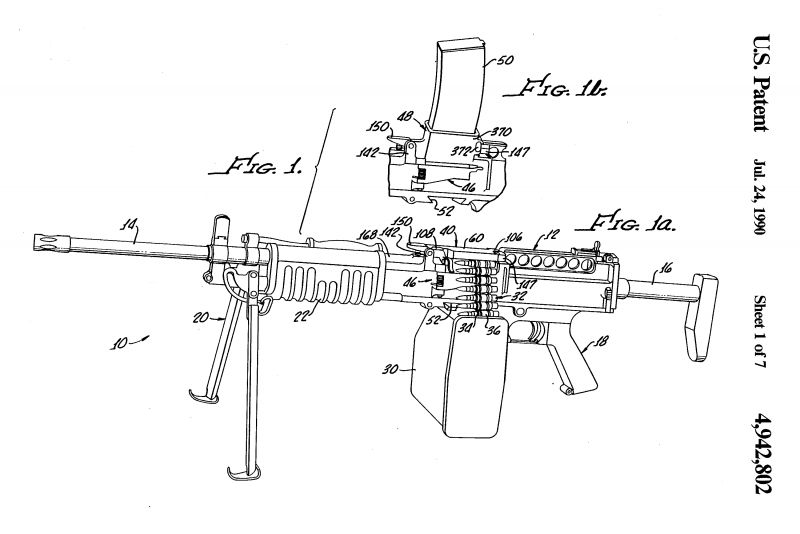 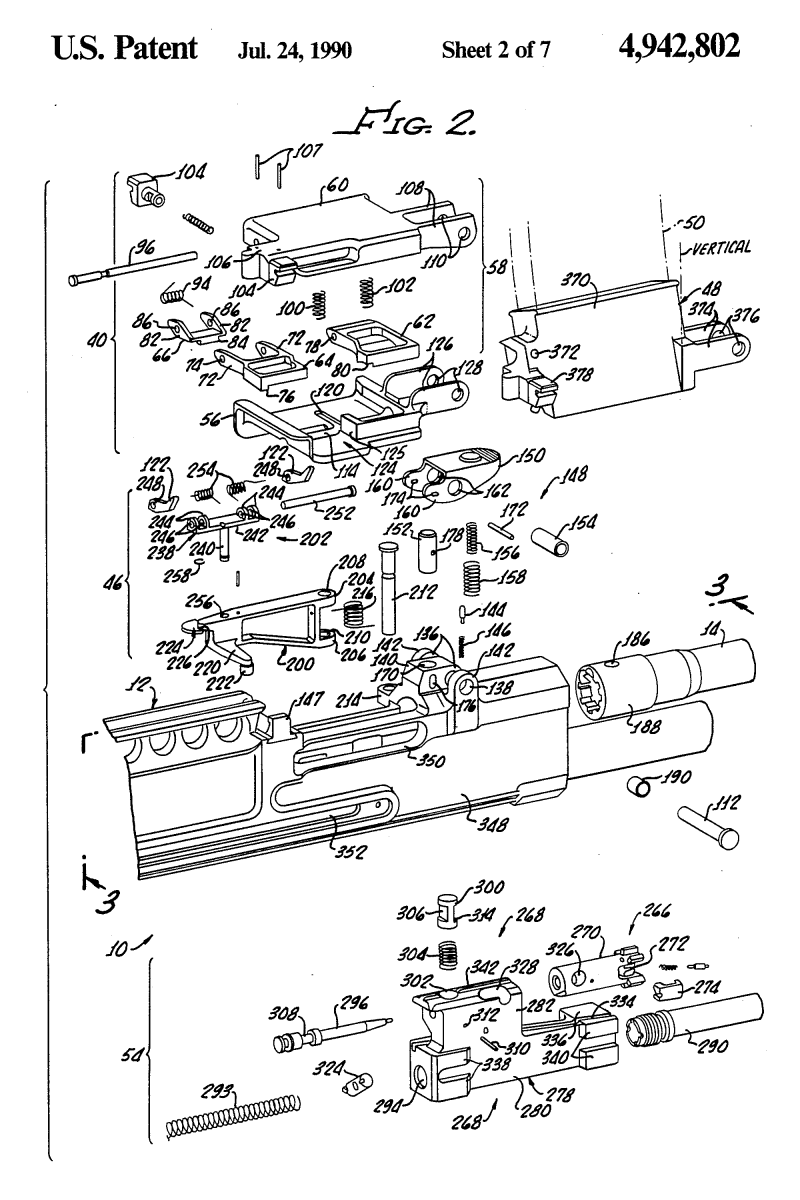 Pay attention to the form of the combat stops and the locking pattern. 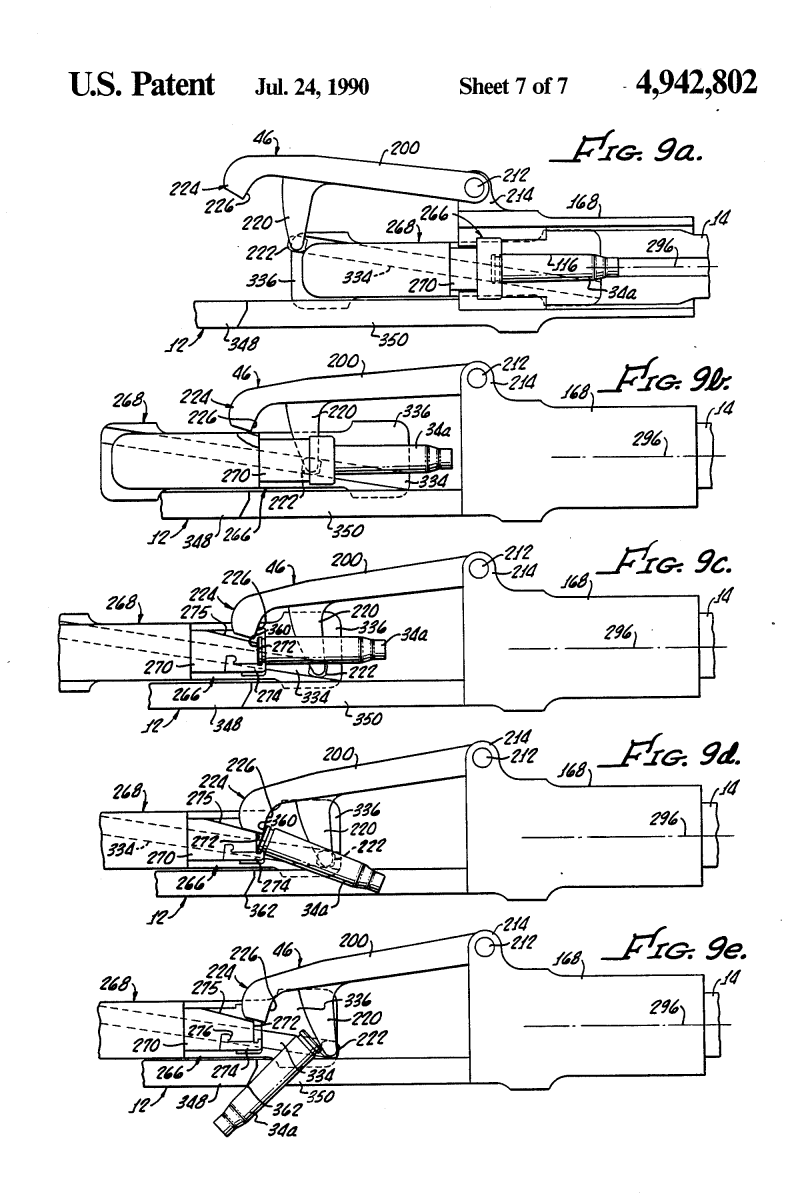 To switch from tape power to magazine power, you need to dismantle the unit with the tape feed mechanism and replace it with another one, with the receiver of standard stores for M16. The store is mounted on top of the bolt box, as with the ZB-26 / Bren machine guns. In order to prevent the store from interfering with aiming, the store receiver is not located vertically upwards, but is shifted to a left at a slight angle. 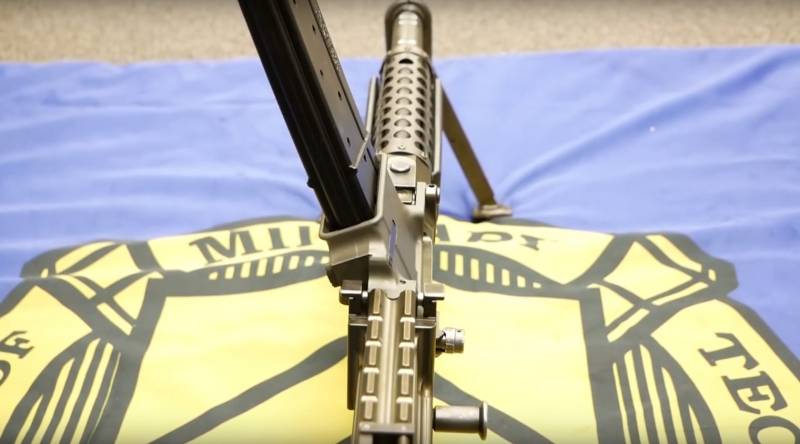 At the end of the 70s, the US Army and the ILC announced joint requirements for a light machine gun under the Squad Automatic Weapon (SAW), "Automatic Separation Weapons" program. By then, Colt had already developed and tested the XM106 machine gun. It was a modification of the M16A2 with a heavy barrel, which is also known as the M16 HBAR. However, the military rejected her. The Colt Machine Gun 2 (CMG-2) also failed the test. ARES also decided to participate in the SAW program with the Stoner 86 machine gun. In addition to the above models, the following models participated in the competition:

As a result of the tests, the FN Minimi XM249 machine gun was chosen the winner, followed by the HK XM262 with a small margin.

A better photo of the Stoner 86 / ARES LMG 1 machine gun with tape power. Pay attention to the holes in the shutter box. Photo: ar15.com

In 1990, Eugene Stoner left ARES and began working with Knight's Armament Company (KAC). There, among other things, he continued to work on improving the light machine gun of his own design.

At the turn of the 70s and 80s of the last century, Knight's Armament managed to acquire the rights to manufacture the Stoner 63 complex from the developer. The buyer received original drawings and all necessary equipment from Cadillac Gage. Knight's Armament managed to establish the production of the M63A. At the very least, there is evidence of the existence of a “belt powered machine gun” configuration. 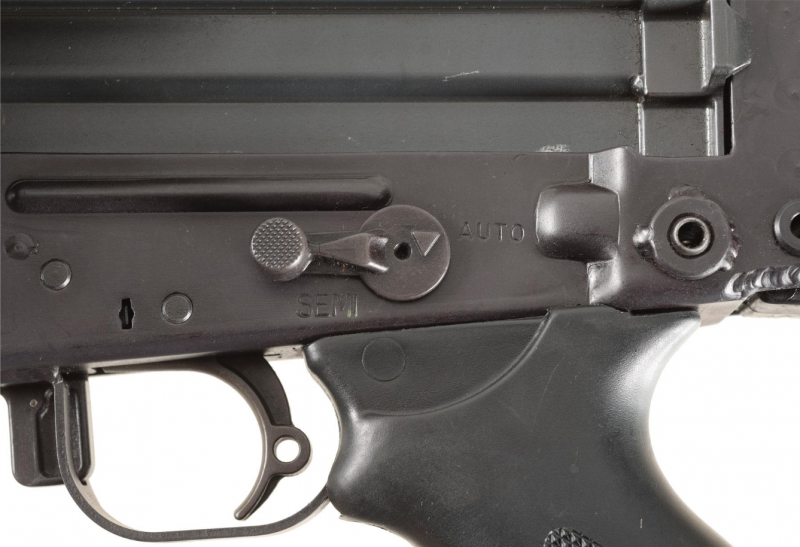 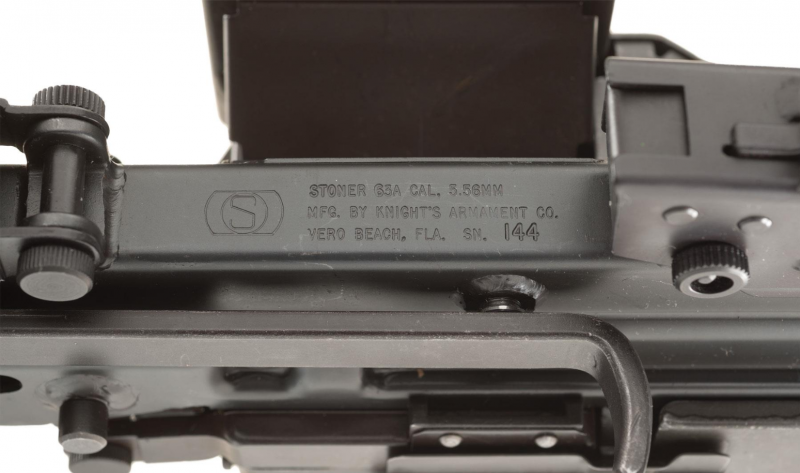 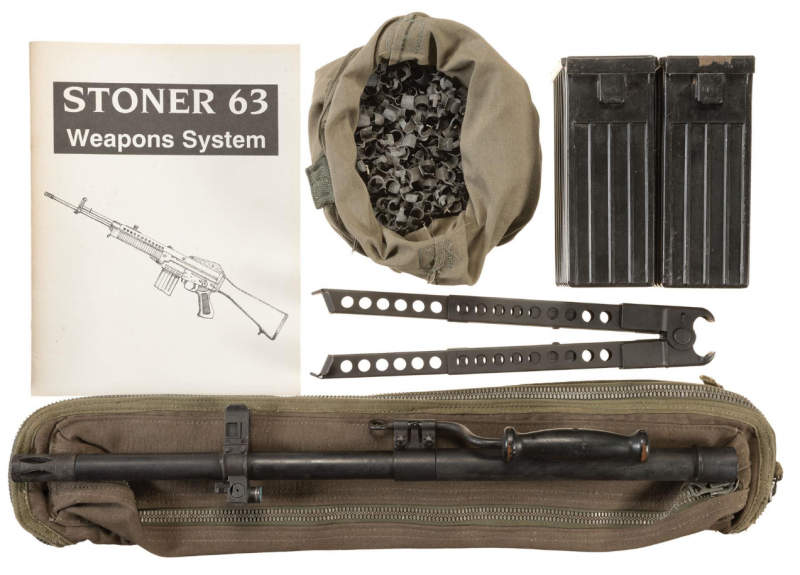 At the auction, the machine gun was sold in the following configuration:

After the transfer of Eugene Stoner to Knight's Armament, the designer began working on the development of the Stoner 63 and 86 weapon systems. So, in 1996, the KAC Stoner LMG machine gun, also called the Stoner 96, was released. In the new model, they refused combined ammunition: they excluded the store and saved only the tape. Also, the Stoner 96 received a shortened barrel and as a result, a decrease in mass. Theoretically, thanks to a shorter barrel and less weight with a machine gun it is easier to control, especially in a limited space.

There is evidence that the FN Minimi (M249), which was adopted by the US Armed Forces in 1982, continued to suffer from "childhood illnesses." And the Stoner 96 was designed specifically to push the FN Minimi out of the market amid these very diseases.

One of the first modifications of the KAC Stoner 96: with a canvas bag for cartridge belt. Please note that there are no openings in the shutter box. Photo: ar15.com
KAC Stoner LMG has long been in the "preparation stage" and has undergone many changes in the process. It was launched into production only in 2016. Its modifications in various designs and configurations were announced both on the manufacturer’s website and at various exhibitions. Below I give photos of only some of them.

KAC Stoner 96 with a box of 200 rounds, a telescopic butt, ACOG optics, a rail system on the forearm and tactical handle. Photo: imfdb 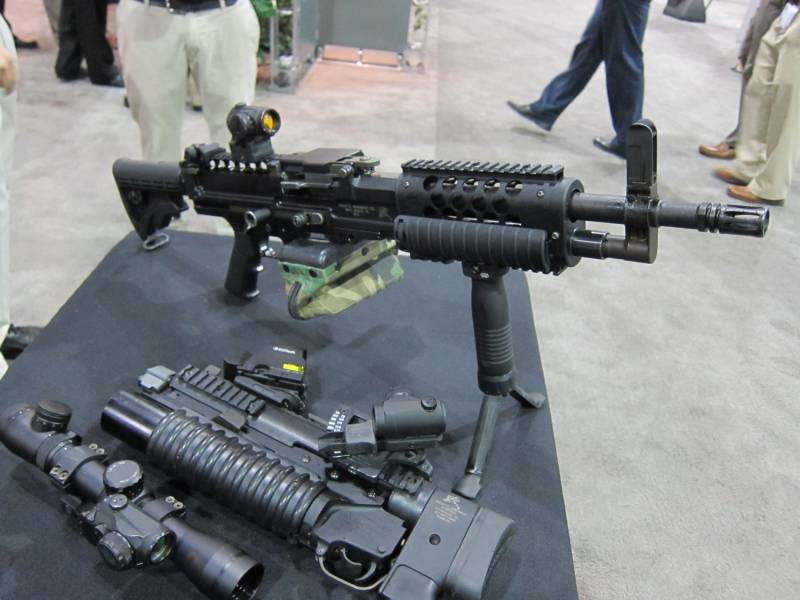 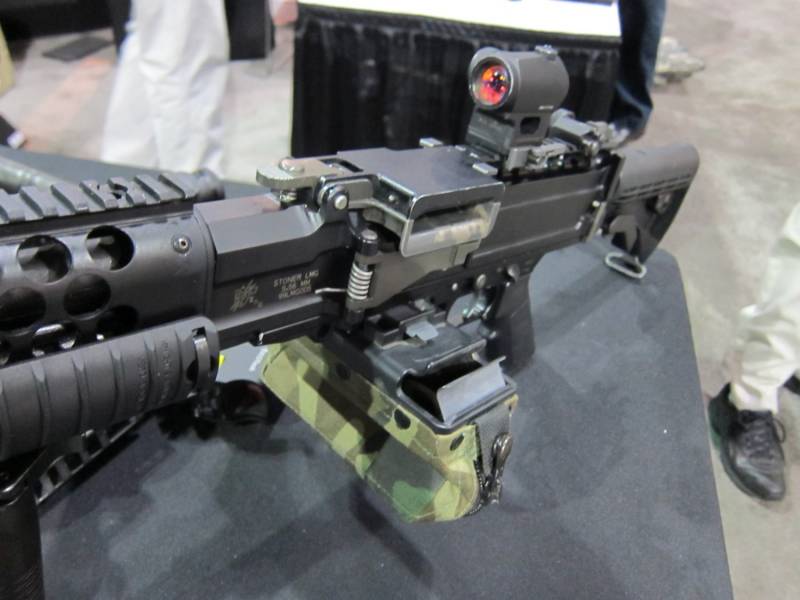 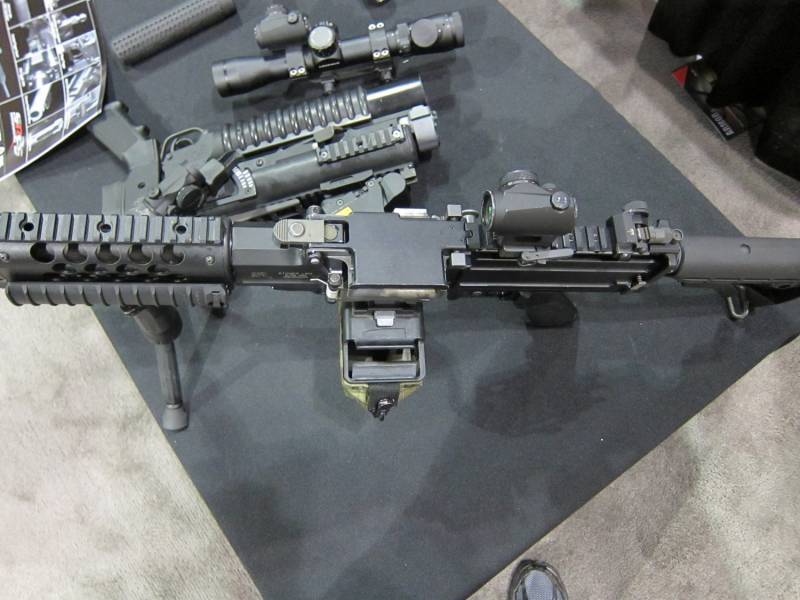 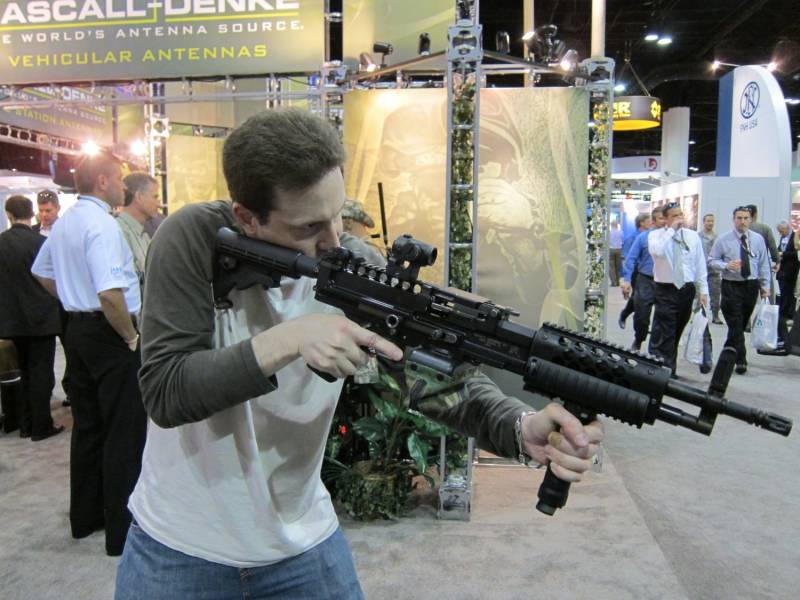 Modification of KAC Stoner LMG A1, introduced in 2015. Only round holes on the bolt box give out their “ancestor” 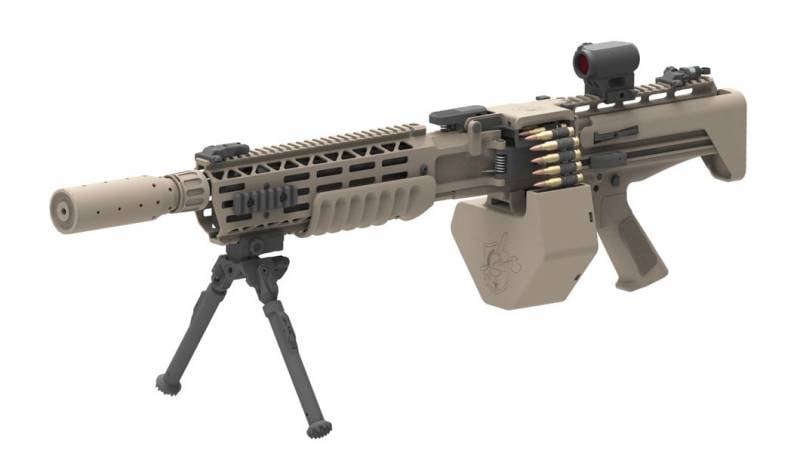 Pay attention to the shape of the cartridge box and the stock. Photo: Knight's Armament


Outwardly, Stoner's brainchild has changed almost beyond recognition. Here you have the regular PBS, and the cartridge box of an unusual shape, and the butt, and even the color of the product. True, there is a version of the traditional, black color.

Already in the early version of the belt machine gun (Stoner 63), the designer provided a solution that could reliably protect the open area of ​​the cartridge belt from clogging. Pay attention to the photo below. Ian McCollum (Forgotten Weapons) prepares the Stoner 63 machine gun for firing. The arrow indicates the “door” covering the tape from the box to the receiver. 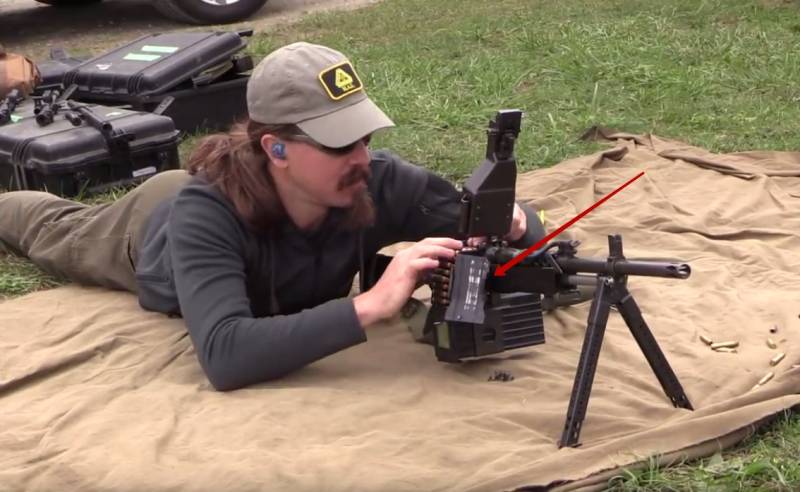 And now, thirty-odd years later, the successors of the Eugene Stoner case proposed a reasonable compromise between efficiency and the number of operations performed. 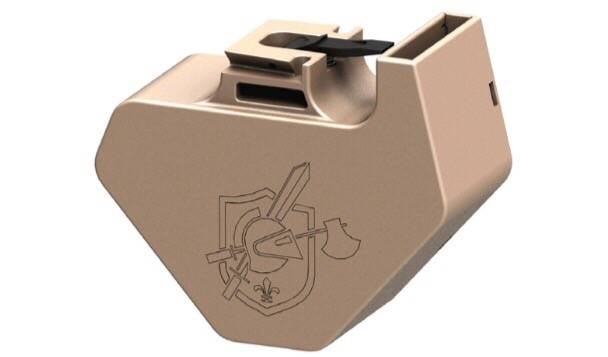 Cartridge designed for LAMG
The manufacturer developed for the KAC LAMG machine gun a version of the cartridge box for a tape of 150 rounds. It differs in angular shapes and a flat lower part. The lower plane of the box can be used as a support for the machine gun, without folding the bipod. Thus, the shooter saves valuable time.

From the box of the new model, the tape passes through a rigid sleeve, which was called belt feed control lips. The developers tried to bring the "lips" of the cartridge box as close as possible to the receiver window. The photo shows that they are slightly above the level of the hook for fastening. The designers considered that the smaller the portion of the tape will remain open, the less likely it is that the tape will be affected by external factors. For example, it does not collect thickets, does not cling to surrounding objects. In addition, this design should provide a smoother feed tape. 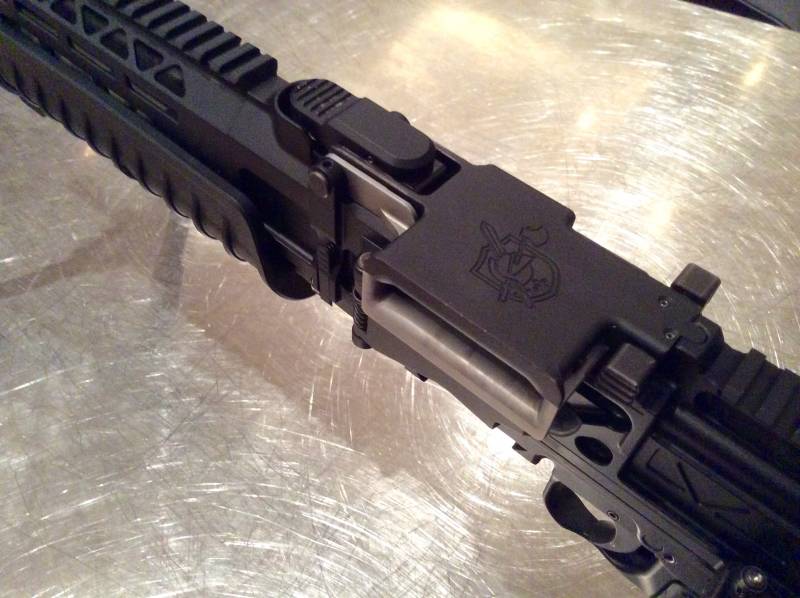 KAC LAMG bolt box cover. Pay attention to its length. Here and below - photo of Soldier Systems Daily (SSD)
And behind the lid, above the rest of the slide box, is the Picatinny rail. A folding rear sight has already been installed on it and it is possible to mount any compatible optics. The manufacturer’s website states that this solution allows the use of attachments with greater convenience. In addition, when replacing the tape in a limited space, a small cover is also a plus. Agree, this has its own logic. 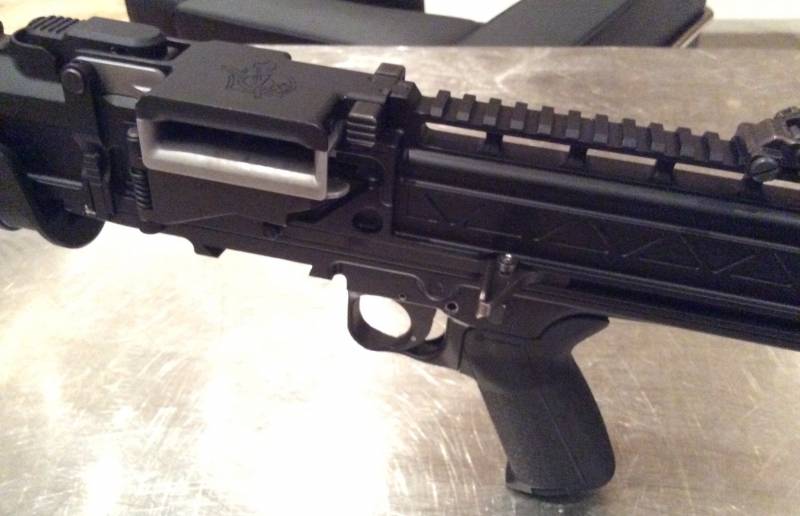 The manufacturer does not specify what materials these or those parts of the KAC LAMG machine gun are made of. Judging by the only picture from the official site, it can be assumed that polymers were widely used. However, the publication Soldier Systems Daily (SSD) notes that the rail mounting system on the receiver (under the collimator) is made of material "weapons-grade aluminum." Perhaps we are talking about alloys 6061 or 7005. 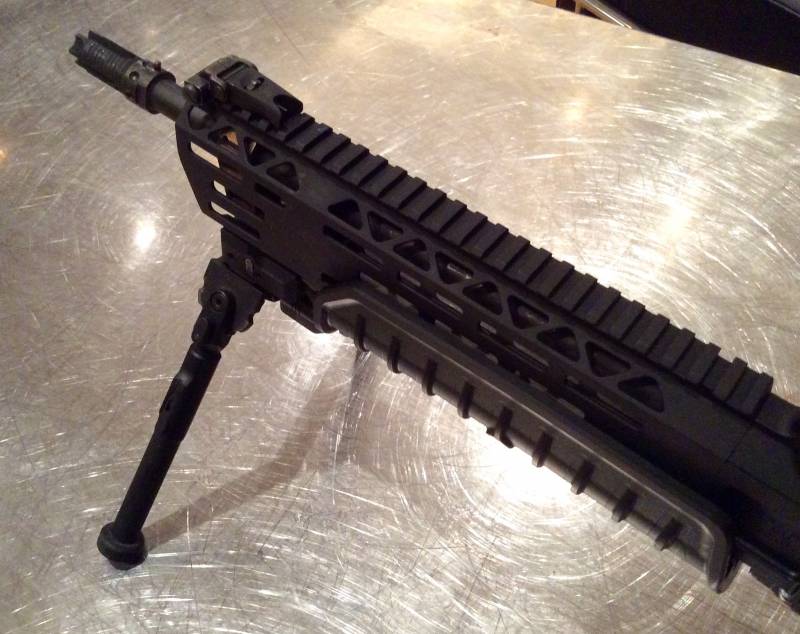 Pay attention to the flame arrester, the protective cover, and the folding front sight KAC LAMG

Rate of fire KAC LAMG ranges from 575-625 rounds per minute. The model supports quick change of barrel and is compatible with NATO detachable cartridge tapes of type M27. Let me remind you that the tape type M27 was developed in the 60s specifically for the machine guns of the Stoner system.

1. Flame arrester of improved design to increase the disguise of the shooter. 2. Handguard for venting the barrel, securing the body kit, and easier trunk replacement. 3. Barrel Release button + Barrel latch latch (Lock-Up Mechanism). 4. Receiver with oblong holes to save weight, and mounts for body kit. 5. Recharge handle. You can cock weapons from both the right and left sides.

6. Mount for cartridge box. Fully compatible with metal boxes for 200 rounds, canvas bags for 100 rounds, as well as new items: angular box for 150 rounds. 7. Trigger Pack. 8. Removable butt. You can install any butt that meets the defense standard MIL-STD (US Department of Defense).

The length of a standard barrel is 15 inches (38,1 cm), the rifling pitch (twist) is 1: 7. But for the use of weapons in a limited space, a shorter and lighter barrel is offered, as well as a barrel with integrated PBS, which provides an optimal result (it is bought separately). PBS is made removable (for maintenance).

Barrel with integrated PBS for the LAMG machine gun 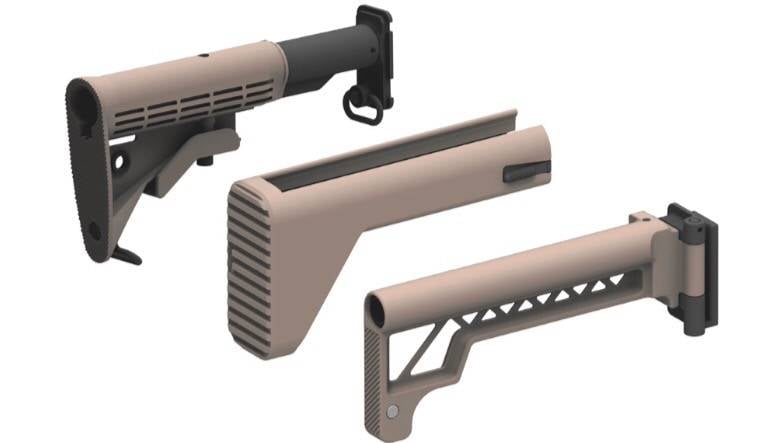 Different models of stocks for the LAMG machine gun

Among the key qualities, the manufacturer notes:

1. Forged trigger and barrel. After forging, the trunks are subjected to heat treatment, and then the barrel channels are chrome plated. This allows the barrel to withstand the effects of high temperatures during intense shooting, while maintaining accuracy, durability and reliability.

2. The patented Quick Detach Coupler (QDC) system is a quick disconnect clutch for muzzle attachments such as a flame arrester, compensator and PBS. Thanks to her, the muzzle nozzle is not wound onto the barrel, but is precisely mounted on the barrel until it clicks. All nozzles and most Knight's Armament barrels are equipped with a QDC system.

4. The system of reduction of return * (constant-recoil / spring run-out operation).

* The author turned to the manufacturer with the question: how does the system for reducing returns work? There has been no answer to this day.

Judging by the comments on the English-language forums, the Stoner LAMG recoil reduction system is somewhat similar to the one used by James Sullivan when developing the Ultimax 100 machine gun (Singapore). The same designer, one of the assistants to Eugene Stoner, whom he lured from ArmaLite to develop the Stoner 63 complex. I recall that Mr. Sullivan (L. James Sullivan) took part in the development of such rifles as the M16, Ruger Mini-14, Ruger M77.

Shooting from the Stoner LMG, aka the Stoner 86 machine gun from Knight's Armament. Demonstrated by Jerry Mikulek (record shooter)

We are in Yandex Zen
Stoner 63: Survival Carabiner and Bullpup Rifle
Stoner 63: Eugene Stoner's modular weapon system
22 comments
Information
Dear reader, to leave comments on the publication, you must to register.