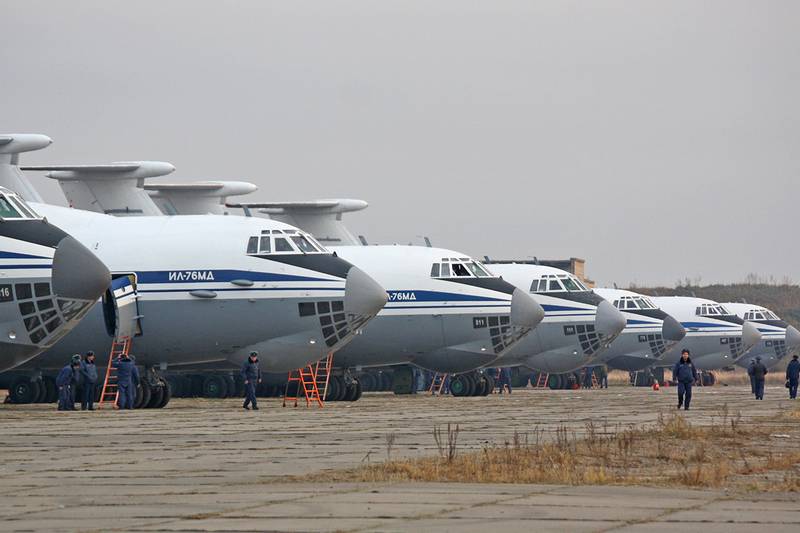 Nine military transport aircraft Il-76 of the Russian Aerospace Forces are concentrated at the Chkalovsky airfield in the Moscow Region. These aircraft will be attracted to deliver assistance to Italy. It is reported by the Ministry of Defense.


The Russian aerospace forces concentrated nine Il-76 military transport aircraft to deliver virology teams and equipment to Italy to combat the coronavirus. Aircraft were transferred from airfields based in the Pskov, Ulyanovsk and Orenburg regions. At the moment, the creation of the air group is completed.

At the military airfield Chkalovsky (Moscow region) concentrated nine Il-76 military transport aircraft aviation Russian Aerospace Forces, which over the past night, along with trained crews, were promptly transferred from the Pskov, Ulyanovsk and Orenburg regions
- said in a statement.

Earlier, the military department reported that the Ministry of Defense would send eight mobile teams of Russian military virologists and doctors to Italy, mobile disinfection complexes and medical equipment. The transfer will begin today, Sunday, March 22.

Military transport aircraft of the Russian Aerospace Forces will deliver protective equipment, mobile systems based on KamAZ for aerosol disinfection, as well as Russian military specialists to Italy.

Ctrl Enter
Noticed a mistake Highlight text and press. Ctrl + Enter
We are
Ministry of Defense sends doctors and virologists to ItalyRussia is taken to the Golden Billion
290 comments
Information
Dear reader, to leave comments on the publication, you must to register.